my journey to sewing

my experience with sewing stretches back to my very beginnings. my mother was a competent seamstress that sewed all our dresses, which made up the majority of our wardrobe, for most of my childhood and continued creating dresses for us as teenagers, when we wore them mostly to church on sunday and to dances. she sewed the wedding dresses for all five of us girls and one for a sister-in-law as well. we grew up with pins in the green shag carpet of our houston, tx home on ainsworth. pattern pieces were regularly held up to our little selves for measuring. designs for clothing were doodled on all sorts of paper bits. (mom could draw as well.)

hours were spent looking over pattern books and racing through the isles of bolt after bolt of fabric at hancock's. it was as much a part of our childhood as breathing and eating and living in a house of eight kids. she was notorious for sewing on the finishing touches or pinning parts "to be finished later" on us as we ran out the door for a function. i'll never forget the morning of my wedding, walking in the door and seeing my dress with the buttons still not on - the buttons that were the only decoration on the front of the gown.

halloween was wide open to our imaginations and our costumes were far superior to the then-popular one piece vinyl body suit and plastic mask jobs everyone else wore. i never went to a school dance (sniff, sniff) but my sisters all had exactly the dress they wanted for their dates, made to order in every detail. we believed she could sew anything. but somehow, sadly, the skill was never passed on. maybe mom thought we were absorbing it by osmosis. i do remember her instructing me about lining up the pattern on the grain of the fabric. that's it.

i excitedly took home ec in middle school. i produced one pillow with an embroidered checkerboard pattern of pink pigs and lips that read "hogs and kisses" in the middle square. i don't remember anything else about middle school home ec other than being terrified my finger would get sewn through and our teacher telling us through her tears that the challenger space shuttle had exploded with school teacher sally ride on board. (that'll date me pretty accurately.) i did not pick up the ability to sew.
high school was much the same. i took general home ec freshman year. when we reached the the sewing portion of the term, our darling elderly old maid teacher assigned us a rounded make-up cape for the project. if girls ever did use make-up capes to protect their clothing while applying make-up, no one i knew in three generations had. and it was one big circle. my mom completed the project for me. that was the end of home ec sewing instruction. and honestly, sewing just really wasn't cool at that point.

for christmas my junior year, mom surprised me with a basic model singer machine that she'd had on layaway for months, paying off bit by bit so she could give me a machine. i believe i cut out two squares to make a pillow for my bedroom, but it was never made. somehow the machine followed me out to college and into my marriage. when i took a puppeteering class as part of my early childhood education degree, i was surprised to find i could whip up a basic handpuppet shape rather easily. but sewing still wasn't cool and i had no interest.

when my second child was born, i took a scrapbook class from heidi swapp that was all about making your own custom-sized page-protectors and stitching on your pages. i was smitten. i realized i really liked the feel of needle and thread in my hands even though cross-stitch was "not my style" for other craftables and wall decor. i used the machine to make some fun effects on my scrapbook pages from time to time, but my machine was located in the laundry room downstairs and my scrapbook room was upstairs.

after i was exposed to the world of blogging and on-line sharing about the time my sixth child was born, i slowly became aware of the handcrafted movement and dyi chic. i found myself wanting to make things with my own two hands, pretty fabric, a needle and some thread. kelly mccaleb had a tutorial on her blog for a vintage block baby quilt that looked doable. (which has since disappeared - oh, kelly, please bring it back!)

the clincher, my true fall through the rabbit hole into the wonderland of sewing occurred when i came across the premier issue of stuffed, a softy magazine, whilst browsing scrapbook magazines at the bookstore. a fascination with softies quickly led to browsing in the craft book section which led to buying idea books on aprons, embroidery, then clothes, then whatever else i could get my hands on. my addiction to books is longstanding, crafting books being just an extension of that love and a marrying of the two.

i began looking for the designer fabrics i saw in the books. low and behold my favorite local scrapbook store opened up a small fabric section which soon took over a quarter of the store. i was completely hooked. but i still hadn't sewn more than the body of one small softie. all the females in my family were getting together for our annual "girls weekend", where three generations of ladies hang out at my s-i-l's cabin for a weekend of bonding on all sorts of levels. crafting is always involved. i had purchased a fabric headband at a boutique store that i was sure we could make for pennies on the dollar. it became our project for girls weekend 2010. i bought lots of those delicious fabrics, had my machine serviced, and set out for sewing fun with my seesters. 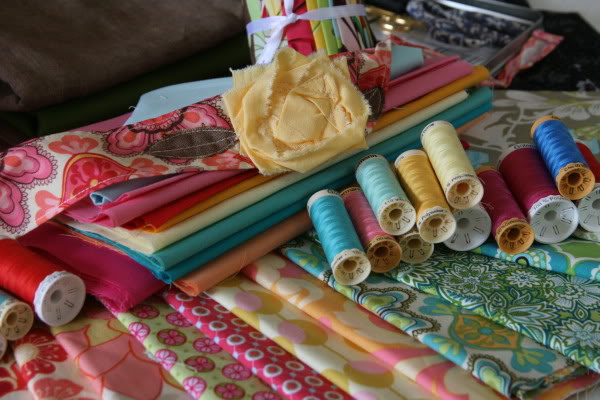 as i sat down to sew my first headband that weekend, i had a mild panic attack. i wanted so, so, so badly to be able to sew and i was terrified i wouldn't be able to actually do it. i got my headband all ready to sew, threaded the machine, put the headband in place, pushed the presser foot down and . . . nothing. nothing! i knew it. "mom! my machine won't go. what have i done wrong?" my wise and patient mother replied, "did you turn it on?" oh. i grinned sheepishly, turned the machine on, and started sewing. it worked! it wasn't perfect, but it was just fine and it worked! i made three more headbands that weekend for me and my girls. my seesters declared the project a hit, working well into the wee hours of the morning to knock out some really stunning numbers. 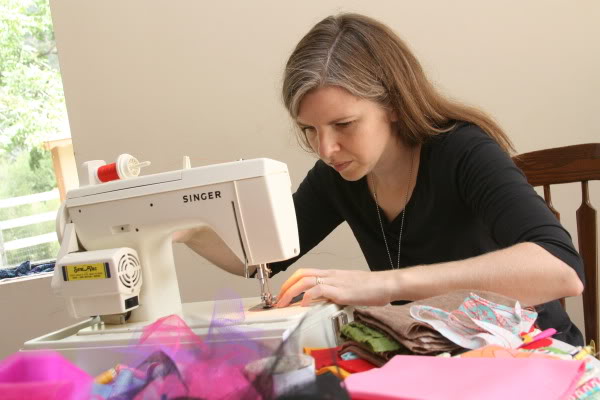 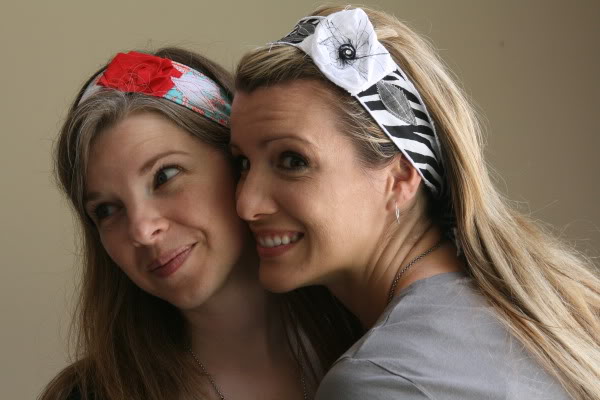 with a few simple projects under my belt, my confidence grew just a little. a couple weeks later with the mr. out of town on a hiking trip with the four oldest children, i decided to visit the fabric store again. i took along the two youngest charges in my care. in order to occupy the four year old, i let her pick out some fat quarters, thinking of a simple four square baby blanket i'd been gifted with my third child. it should be simple enough and fun to make for her. little did i know where it would lead. 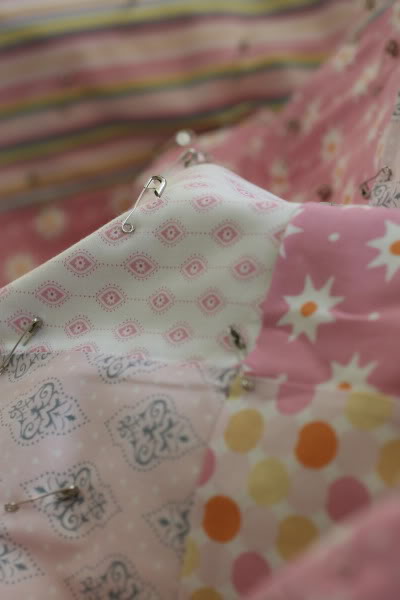 fabrics: soliel by annette tatum for freespirit
my daughter has dubbed it her "star cookie blanket", an allusion to a fancy nancy book

the original blanket was backed with a coordinating flannel solid but the designer colors my sweetie had selected could not be matched by the standard stock of colors. i visited three fabric stores with two small girls trying to find a suitable flannel. none could be found. so i decided to just quilt it. sure, why not? then i could use one of the fabrics she'd picked as the backing and learn a little about quilting while i was at it. that turned into an eight panel baby quilt that i decided to handquilt, thanks to inspiration from jane brocket's the gentle art of domesticity. 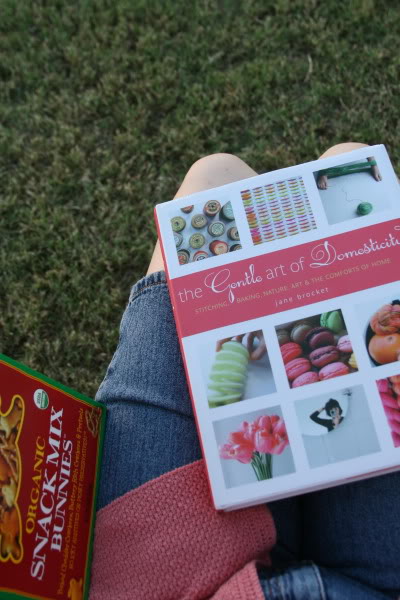 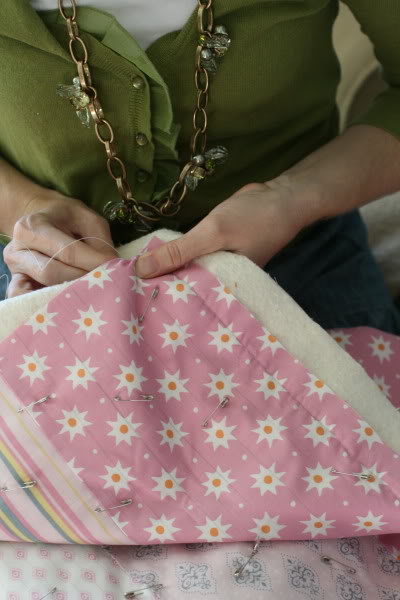 i started reading up on quilting and found a tutorial for hand quilting on the internet. that reminded me how i had longed to learn to quilt for just ages (another saga to be written at another time.) my store was offering classes. i was especially interested in the beginner class, which met monday mornings for four weeks and your first quilt would be done. finally, i decided to just do it. why not? homeschooling and six kids under twelve aside, i could make it happen. so i just did. the mr. was silent if not supportive; he knows my tendency to get obsessed and disappear. when my obsession was cooking that wasn't so bad because people still got to eat. years of slaving away over healthy, delicious dishes to be greeted by little people with "yuck!" put a damper on that one. 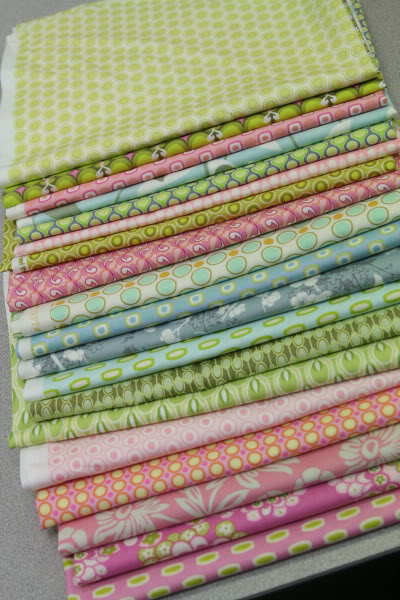 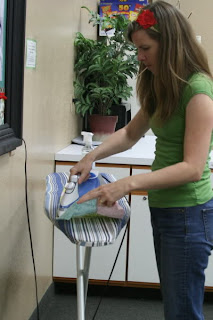 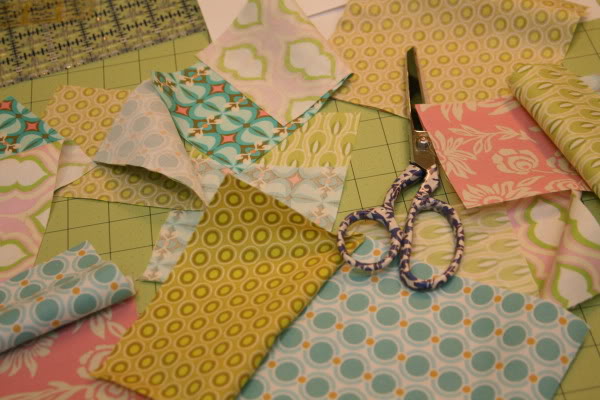 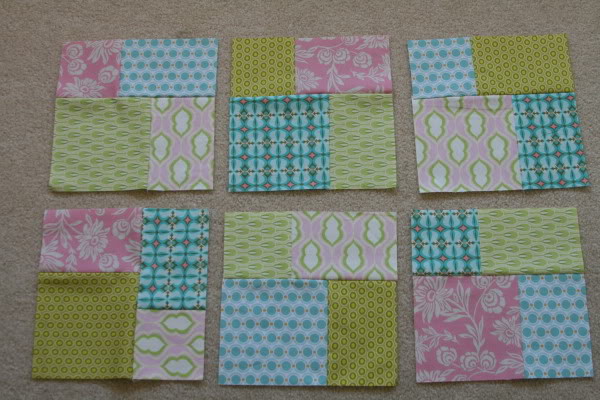 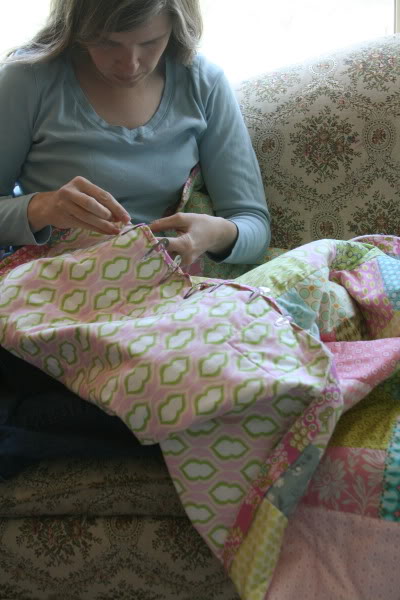 it was certainly an education taking that class; yet another saga i may or may not record. i learned a lot from what i did wrong just as much as what went right. and it got me addicted. completely addicted. before the class was over i had everything picked out for at least two more quilts, including the same pattern again with new fabrics. my fellow classmates and i reasoned we were familiar with it now, doing it once more would help cement the skills we were learning without throwing anything new into the mix. i found out my favorite part of quilting is probably handsewing the binding. love it. that takes me up to just about where this blog is going to start. i'm so excited to see where it's going to go from here. you're welcome along for as much or little as you'd care to see.

happy sewing, y'all.
Posted by hydeeannsews at 10:41 PM

Email ThisBlogThis!Share to TwitterShare to FacebookShare to Pinterest
Labels: beginner