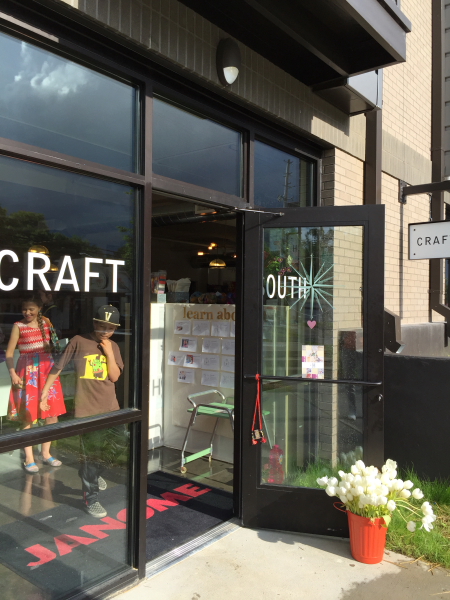 i'm not a girl who gets out much for quilting or sewing events. as much as i'd like to attend a sewing retreat or quilting conference, it's just not practical for me to take the time away from my family for such things at this point in my life. i always admire these events from afar and enjoy them vicariously through others' reports on social media. i try to take in fabric sights when i'm travelling, but i don't travel specifically for my hobby. so imagine my surprise and giddiness when i realized i'd be in nashville, tn on the weekend craft south was opening its doors. i could not believe my luck that i'd be in town the day everyone's fabric design darling, anna maria horner, opened up her lovely, brick and mortar crafters heaven.

the space was smaller and more intimate than i'd expected, but it was chock full of goodies, all artfully displayed. i was in town for another event and only had a short time to spare for popping in, so i didn't get to explore very fully. and after i left, i was appalled at the small number of photos i'd taken while there. but i did not leave empty handed.

the whole event was rather low-key. there were refreshments laid out on the table in the fabric section and ms. horner herself was greeting people by the cutting counter. a few of her family members were also wandering around mingling with customers. there wasn't a lot of hype going on, they were letting the beauty of the space and the products speak for themselves, mostly. and from what i could tell most of the customers were local people. it wasn't like being at quilt market or quiltcon with a bunch of super excited fans around. this made me a bit shy, especially with the camera. i felt like i might be the only star-struck fan girl there at the moment. but i played it cool and did not embarrass myself too badly. 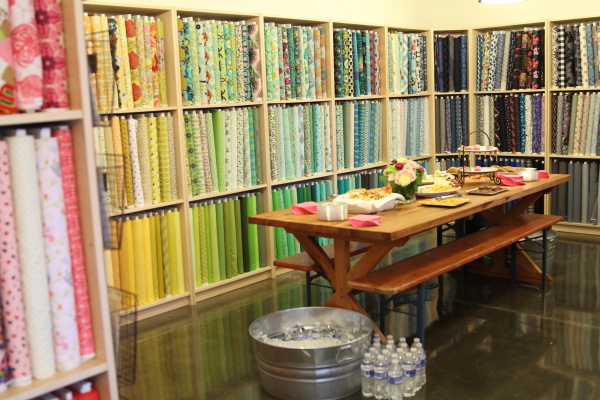 the main attraction to me as a quilter was seeing some of amh's recent quilts in person and the fabric section. while there was not a ton of fabric, it was a beautifully curated selection of fine pickings. it almost felt like shopping ms. horner's personal stash of bolts, if that makes any sense. the collection is organized by color family rather than fabric line or designer, which was a new experience for me and makes for some very different shopping. i would see one print from a line and wonder where the others were since that's how i'm used to shopping. not finding them together, i forgot what some of the prints in a range were and didn't look them out. and it wasn't until later that i realized the plaids i had seen mixed in were probably bits of loominous, her latest line. i so wish that line had been presented by itself somewhere!

on the upside, having the fabrics organized by color really helps you not only select based on color but i also found it helped me look at fabrics individually rather than as part of a line or as belonging to a certain designer. you let go of expectations or preconceived notions you had about the designer or line and just see the fabric. it really does help get over the hype factor that comes with some fabrics. once again, i was surprised with how i liked certain fabrics on their own that i hadn't really liked before because i had only viewed them as a line, not as individual prints. really, there is no replacement for seeing fabrics in person.

of course there was plenty of amh on the shelves, as well as fabrics i have never seen on the bolt before - leah duncan, various art gallery designs, heather ross, birch fabrics, and liberty. yes, liberty of london on the bolt. just a few, but all the same, there it was in abundance and in real life. the liberty was on a special shelf of its own behind the cutting counter. 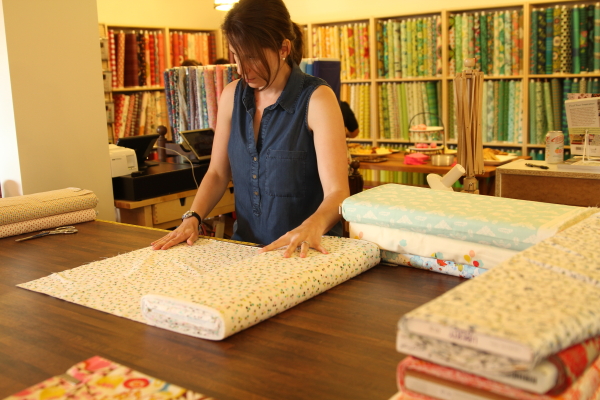 even though everyone else seemed to be mostly browsing i got over my shyness enough to start taking bolts off the shelf for purchasing. the way some people were acting it was like we were supposed to admire and look-but-not-touch because it was all so artfully set out. i decided to indulge in a few quarter yards. as i scanned the shelves with about 7 bolts in my arms, an elderly gentelman and his wife wandered over. "are you going to buy all that?!," he asked? "yes!," i said. "but just pieces of each, of course." i don't think he'd ever seen a fabricholic in shopping action before and he seemed greatly amused. 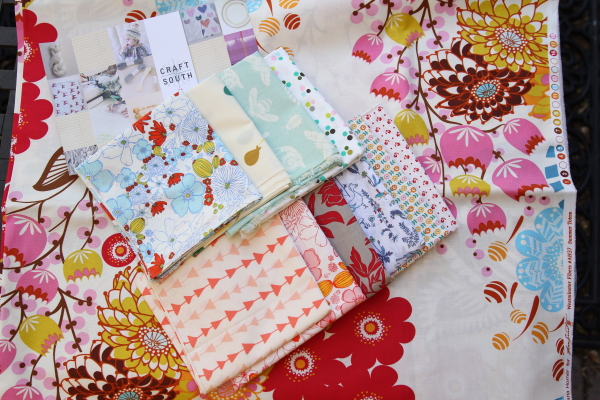 i picked out some low-volume prints and the dodo bird fabric from liberty's new alice line for my quarter yards, and since i was in house, got some yards of a lovely amh print, "summer totem" from loulouthi, for a backing.

while i was waiting at the fabric counter, mr. horner, canned beverage in hand, casually mosied on by and stopped to comment on my purchases. "you're mr. horner, aren't you?" i asked. "yes, i am. who are you?," he replied, in a friendly and earnest manner, reaching out to shake my hand. just a few minutes before i had seen amh, out of the corner of my eye, greet someone who seemed to be from the industry and i knew there were other people from the community around, so with that in mind i tried to introduce myself as a person-of-the-masses customer, not anyone who he should know. i didn't manage it well at all, getting tongue-tied and a bit confused. "i'm, well, i'm not, i mean, i'm just hydee (last name)," i stammered. holy cow, i was silly! but he was very gracious and pretended he didn't notice at all. we then proceeded to have a pleasant conversation about my fabric purchases, large families (we both have 7 children), and nashville, since he's mostly a native and i lived there in high school. after a few minutes he excused himself to go put a record on the record player.

juliana horner, their eldest daughter and creative genius in her own right, was also there, with colorful, pixie-styled hair, helping customers find things. after chatting with mr. horner, i decided i should just go say hello to The Lady herself once my fabric was all cut. i know she's used to it, so i was even going to ask if i could take a photo with her. to my dismay, shortly before i was ready to go, she disappeared into the back to take a break. my time was up and i wasn't fan girl enough to barge into her break time, so i left without speaking to her.

the whole experience was a little surreal, like walking into a book i've read before, and having it be alive all around you. but at the same time it was very down-to-earth, warm and inviting at the shop. it's located in a lovely neighborhood of nashville i'd never been in before. i believe it's called 12 South. that's the road it's off of anyway. there are several unique shops and eateries all within walking distance. most notable to me was a jeni's splendid ice creams scoop shop, home of the absolute best ice cream i've ever had in my life. seriously. i didn't get back to craft south the rest of the trip, but my travel companions gladly accompanied me to jeni's twice more in the four days we were there. nashville is lucky enough to have three locations. 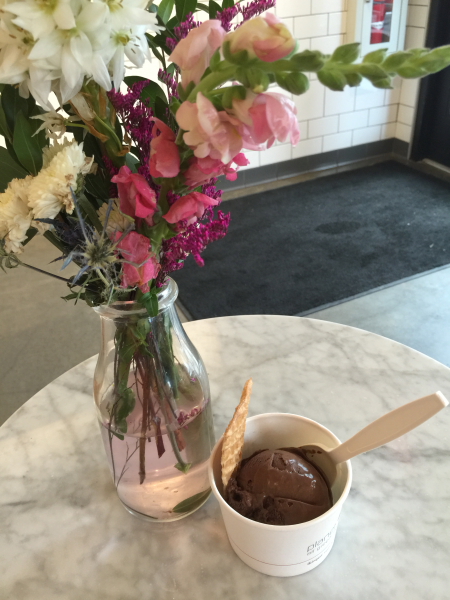 darkest chocolate was my absolute favorite - the best chocolate ice cream i've ever had. i tried most of the flavors because they'll let you sample all of them if you'd like, and thought they were all great but the darkest chocolate and passion fruit were my favorites. jeni is pretty smart and offers mini scoops so you can get a bit of everything if you'd like. on my second visit i got a 4-scoop sampler. delicious! 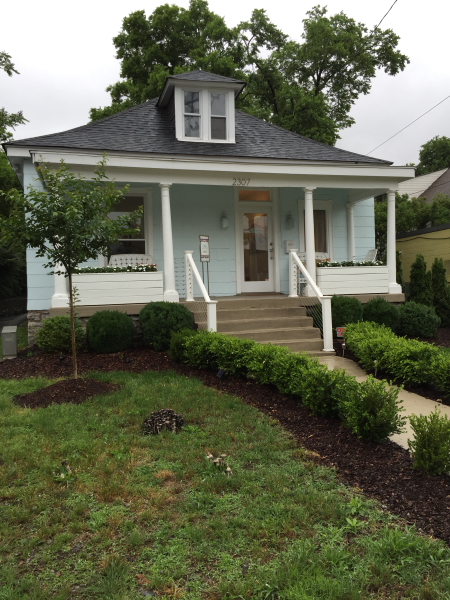 the 12 South area has lots of small, charming old homes, some of which have been turned into businesses. it was pleasurable to drive around and look at them. i wish i knew more of their history, time period, or even the name of the architectural style prevalent in the area. even in my ignorance, i could enjoy looking at them, nestled into all the growing greenery as they lined the gently rolling streets.

after my visit to craft south (and jeni's, of course) i was ready to move back to nashville. it's such a nice, quirky town with so much distinct flavor. but since moving is not in the cards for me anytime soon, i'll have to settle for trying to capture this in a quilt somehow. thank goodness for online orders to help me fill in the gaps whenever i need to. like that loominous collection i missed.
Posted by hydeeannsews at 3:43 PM 5 comments: