life has been in the fast lane this year and quilting hasn't been along for the ride much. i've completed 2 "stella grande" kids' christmas quilts and finished quilting 3 more. that's all there is to tell for an update.


d1 got her completed "mary, mary star contrary" quilt just days before she left for an 18-month stint as a service volunteer in eastern europe. we got some fun photos on the road that should be shared in their own post someday. 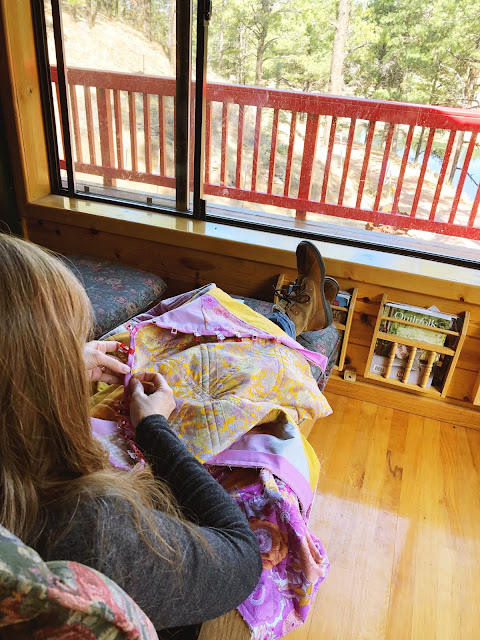 that same weekend (the first of april) while at our cabin, i almost finished off "radiant suzy", d3's stella grande quilt, too. but i had to leave about a foot or two undone. 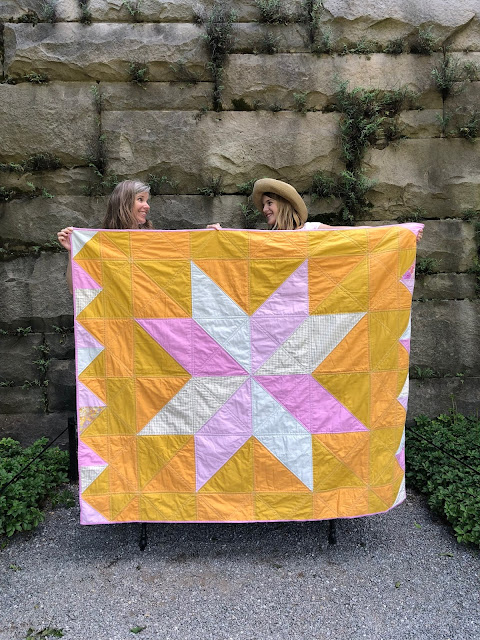 in june, i took "radiant suzy" along with us on a trip to the iconic biltmore mansion in ashville, nc, and finished it there on d3's 12th birthday. that turned out to be pretty special and made for a good photo shoot location for the quilt. maybe someday that will become a post of its own, too. 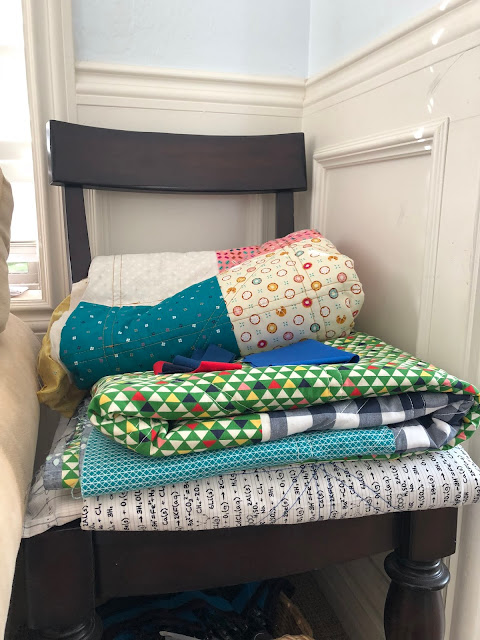 between june and september, i didn't lay a stitch to anything, anywhere. then i got to work on some more quilting on my juki. there are now 3 quilts quilted and one on the machine. yay! my pile of flatlay quilts on the piano room floor has been reduced by half and i've created a new pile of folded quilts that need binding on a chair in the same room. 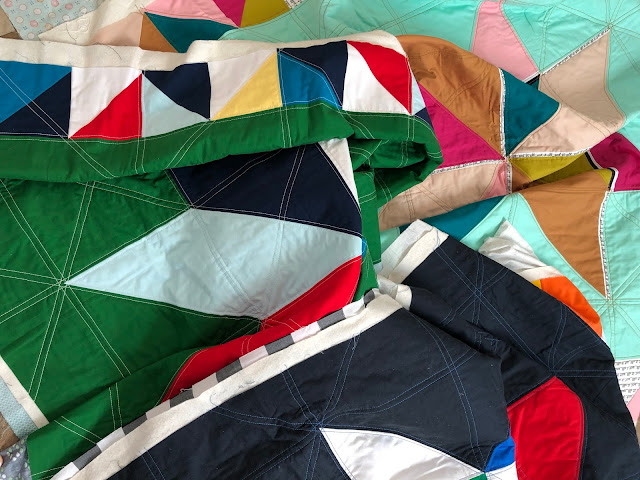 once again, i've used chunky 12wt aurifil thread for some nice contrast and a handstitched feel. it works so well with the simple straightline quilting of this pattern.

they sure feel like quilts now! just a few binding sessions and they will be free to be loved and snuggled by their recipients. unfortunately, when i got all the fabric for the quilt tops i didn't also get binding yardage. i'll be needing to make a trip to the store for that soon.

time at my machine and a trip to the fabric store? i might still be a quilter after all.

home renovations have been the main cause for the quilting hiatus. phase one should be done by the end of the year, so maybe, just maybe, i'll be doing some different projects before too long. at least until its time for phase two.

Posted by hydeeannsews at 3:46 PM No comments:

liberty makes do quilt, a finish 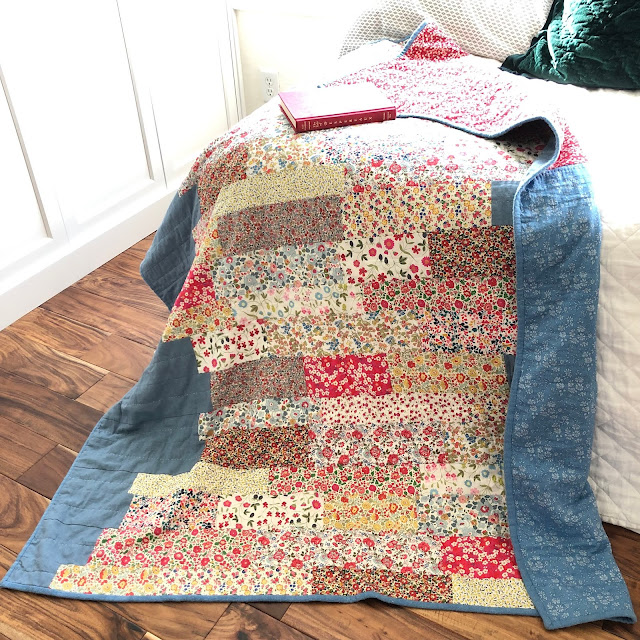 last april, i did something completely crazy/brave/reckless - i cut into my precious liberty of london tana lawn stash without much more than a very loose idea of what i was doing. liberty fabric is something i had been collecting in small bits and pieces over the years, but i had yet to come across the perfect project worthy of my liberty stash.


then i saw this strips quilt made by ashley at film in the fridge and thought it might be a way to get me feet wet at using liberty without investing too much of any one fabric, a simple way to showcase some liberty pieces alongside some crossweave (chambray). i decided i wanted it to look as if it was made of vintage clothing scraps, so i would use randomly sized pieces to make up the strips. and i would use three printed pieces per strip rather than two. 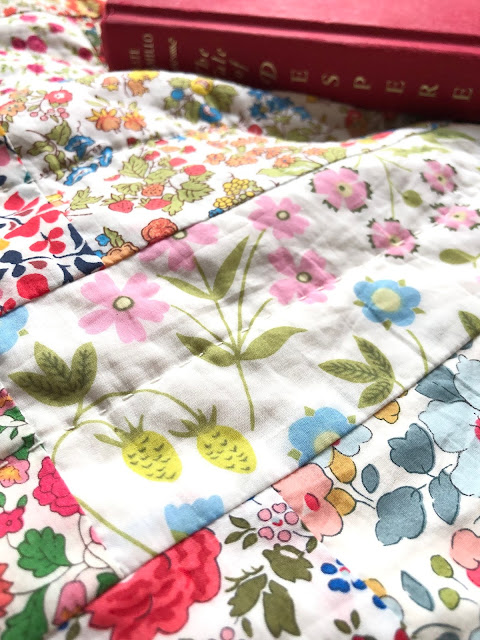 i chose two heights for the fabric blocks: 3.5" cut and 4.5" cut, then cut those strips at various lengths from 5" to 13". some moda crossweave in blue chambray was added to each end to achieve the final finished length of each strip.

the color palette is mostly reds, blues, yellows, and pinks. honestly, there are a few prints i'm not partial to included here. i don't love liberty just for the sake of it's being liberty. there are plenty of prints i don't like. a few made it into my collection because i ordered them online and they appear differently on screen than in person. once again i've learned that if i don't like a print, it won't be disguised when mixed in with prints i do like. it devalues the appearance to me. some people can look at fabrics as colors alone. i can't. prints matter to me. 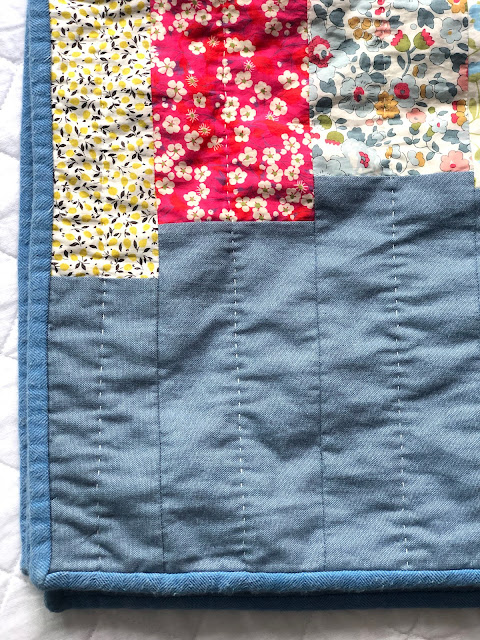 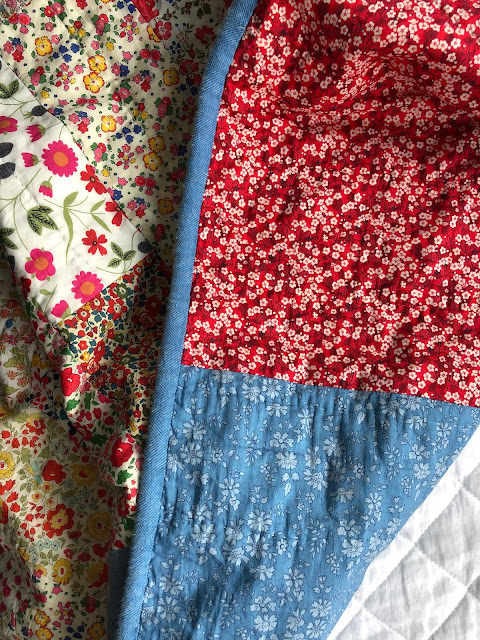 the backing is made of mitsi valeria in red and capel in blue (i think it's capel in C). 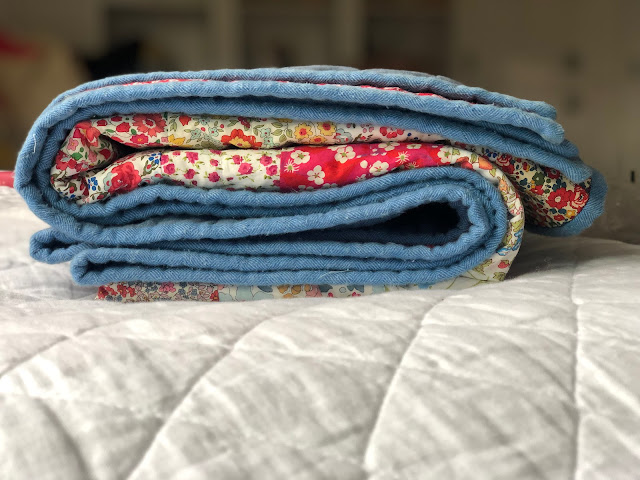 overall, i like the quilt. it has a lovely vintage feel that continues to grow on me. all the different fabric contrasts make it a yummy tactile experience. my girls are all drawn to cuddling with it. on sundays, it's the favorite quilt to take to church with us to keep warm. for some reason, because we live in the desert, it's always kept rather cold in the church building. but we're not going to complain about an excuse to bring some pretty quilts with us.

the name? "quilters make do" is a concept i've always liked, the idea that quilters of old were using up clothing scraps or whatever they had to make something beautiful. since i wanted this to resemble one of those vintage, "make do" quilts, and because i used my liberty finally, that's the name.

this is the first liberty + crossweave quilt i've made, but it won't be the last. for one thing, i cut way more strips than i needed at the onset. that's what happens when you just go at something without doing any math first. but as it didn't use much of any one fabric, i'm not complaining. i look forward to making more variations on this theme.
Posted by hydeeannsews at 5:26 PM No comments: