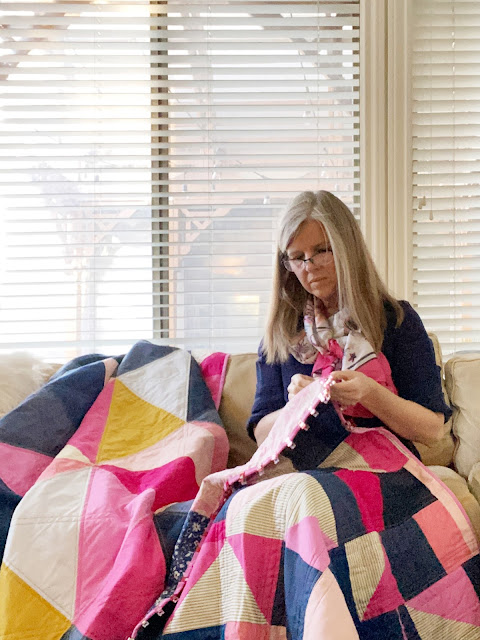 these two quilts remind me of fraternal twins, although one is really the parent quilt that the other one came from.

but since i finished the bindings on two consecutive days, they feel more like twins. they're the rare twins where one is comes on december 31st, late at night, and the other doesn't make it until january 1st, which means that even though they're twins, they are born in separate years.

i say born, but these twin quilts were actually completed in such a fashion - hours apart, but different years. i'll always think of them as being finished together despite the different years tagged to them. 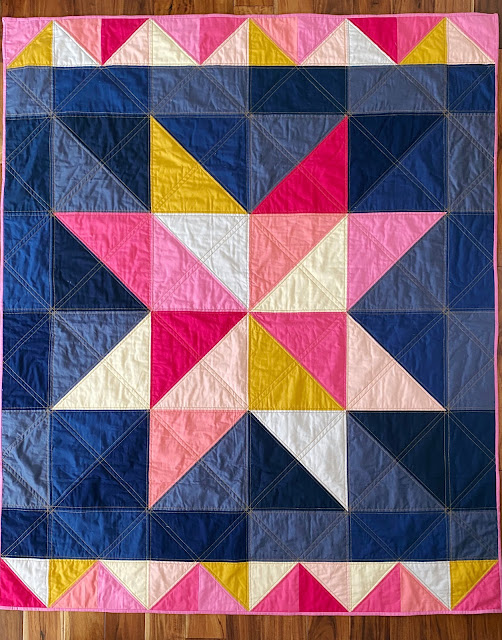 "guys and dolls" the stella grande star version, first started in february 2017, was finished late in the evening on new year's eve 2021. therefore, it's a 2021 finish.

and although i got more than a quarter of the binding completed on "guys and dolls improv" before midnight that night also, i did the bulk of the binding on new year's day, and the last few stitches on january 2nd. 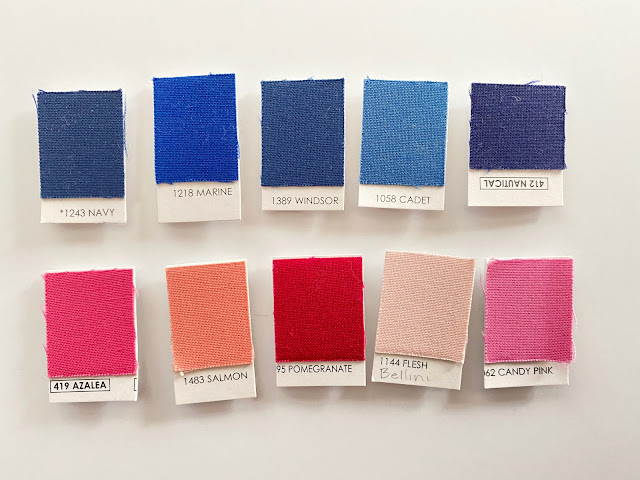 it always feels strange to me that a quilt which was mostly complete but waited for its binding a long time doesn't get counted as a finish until that binding is done. it feels like it was a quilt well before that. saying "this quilt took two (or four) years to finish" because i didn't get around to binding it for months and months makes it sound like a labor-intensive, difficult quilt, which neither of these two were at all. both were quite simple and easy. i just set them aside for a time and quilted other things instead. 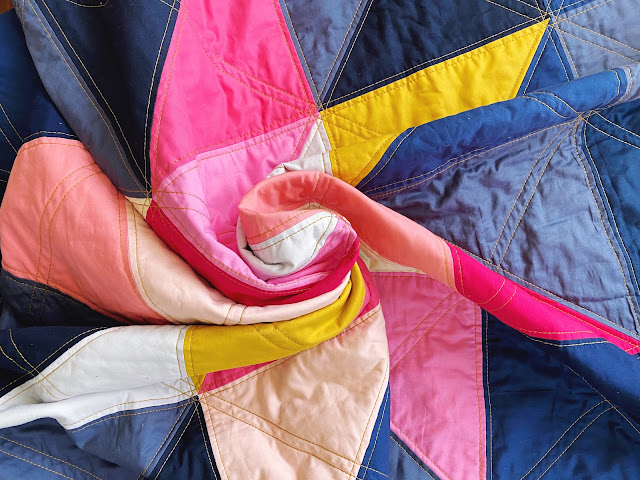 when to call a quilt an official finish is a self-imposed designation, of course, but i don't know how else to call it a finish until that binding is all done and the quilt is ready for a first wash and use, even if the top came together in a day then sat around for months waiting for a backing or if it was sandwiched and quilted right away but didn't get bound for a long time.

it feels even weirder to call the improv quilt a 2022 finish when it was so nearly a december finish. since i haven't done any quilting in a long time, it really feels more like they were both new year finishes completed over the holiday weekend. yet they aren't. 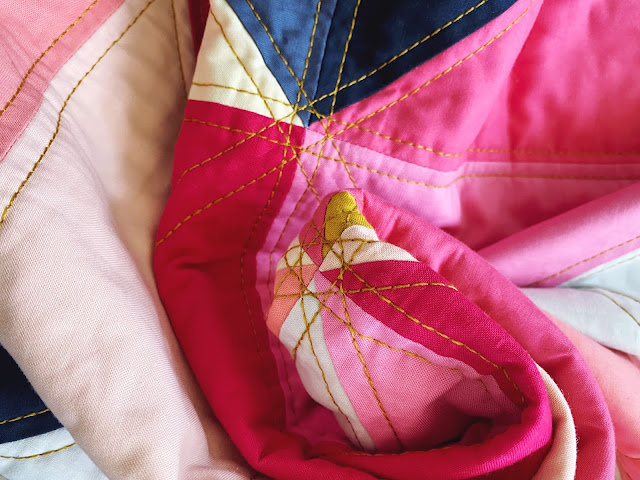 as i'm the kind of person that likes exactness in definitions and splits hairs, as my mom would say, i have to call one a 2021 finish and the other a 2022 finish.

that's enough puzzling and quibbling over dates. let's look at the quilt details. 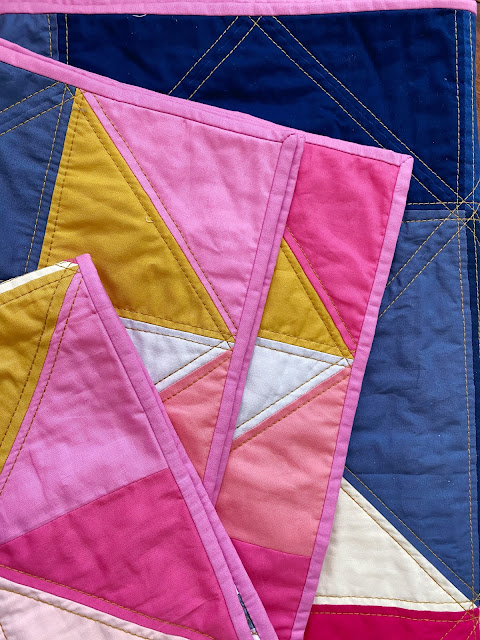 "guys and dolls" stella grande version was given the big-stitch machine quilting treatment using aurifil 12wt in brass (2975). i echo stitched on both sides of most seams using a large stitch setting (4 on juki). i love this effect as it feels very similar to handquilting. 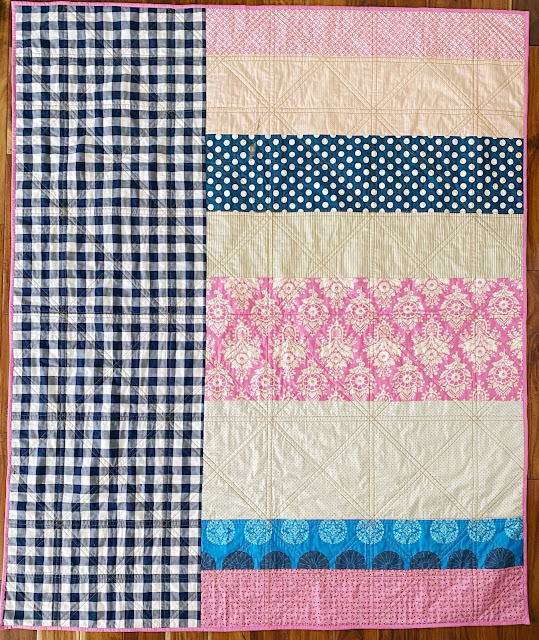 the backing for "guys and dolls" pleases me very much. i just adore the mix of navy and pink prints. i got a good variety of scales and values in there and i think it's just fabulous. i feel like the combination of fabrics would make a great quilt of the printed fabric sort if i was so inclined. 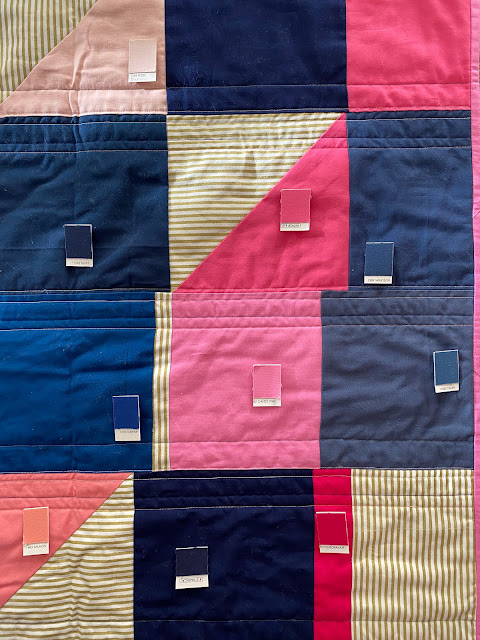 the improv version of this quilt came about when i decided against using the hst blocks i originally made for the star quilt's border. i used all the pink colors from the star and paired them with a gold striped fabric. once i completed the blocks, i decided i didn't like the look of them with the solid colored star. there were several other leftover pieces from the cuttings for the star block, as well.
my original intention was to make a baby quilt from the abandoned hsts, but there weren't enough of them. as i was contemplating how to make it bigger using the other scraps i had, somewhere along the way i decided to make a full-sized quilt in an improv fashion. 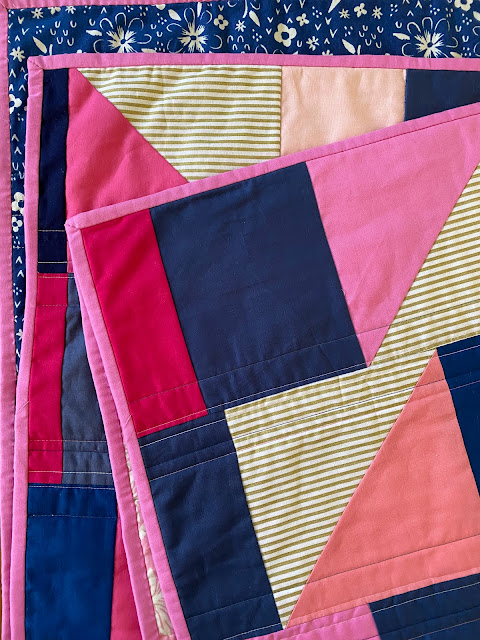 i wasn't sure at first about mixing the hsts with improv-sized scraps, but it worked out beautifully. i really love the patchwork effect of this quilt.
i cut all scraps i had to a 6.5" height to match the 6.5" unfinished hst blocks and to make it easier to assemble the pieces into cohesive rows that would be easy to join together. i used whatever widths there were in that height to make the rows and just aimed to make them the same width as the stella grande quilt (60" wide). this was a really quick way to join the quilt and made for a fast flimsy finish. 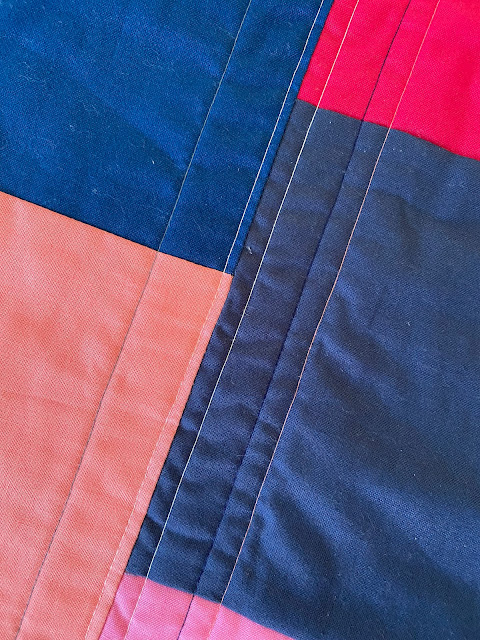 instead of using big-stitch machine quilting for this one, i opted to do horizontal lines spaced at random intervals. i used aurifil 50wt in 4 colors of thread: pink, white, silver, and navy. this had an unexpected effect when threads seemed to disappear in squares that were close to the same color as the thread. i wasn't anticipating this, but i really like the way it looks. 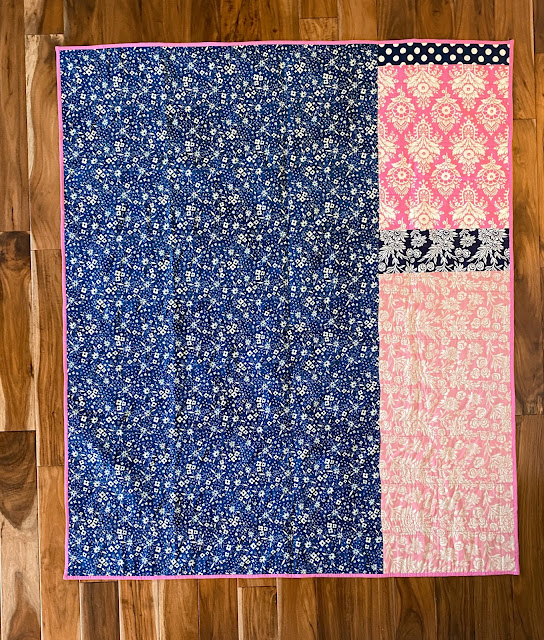 the backing for "guys and dolls improv" is another pretty mix of prints. i was able to use the wood-block looking daisy print from joel dewberry's meadow collection in pink and navy. i love this print and have used it in several quilts in various colors over the last 10 years. featuring it a bit here makes me really happy.

i used the same kona cotton "candy pink" for the binding of the improv quilt. probably because i just made them both at the same time and/or i didn't have enough of a navy on hand. looking at it completed, i wish i had used a navy for this one. it's good enough, i just think a blue would have been better suited to this quilt. 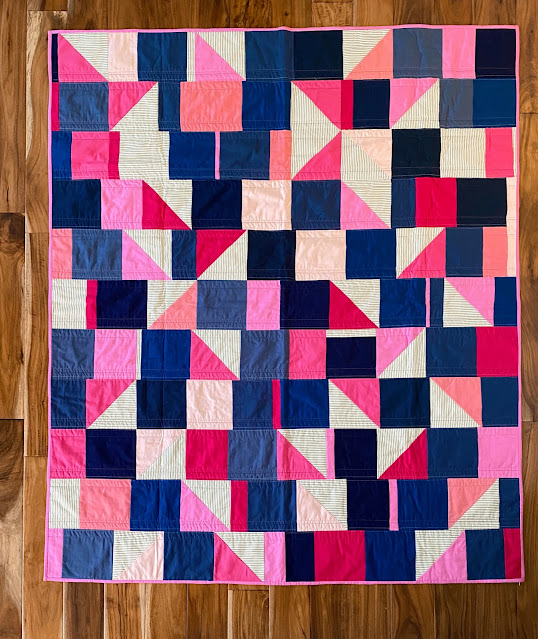 this is the first full-sized improv quilt i've made and i couldn't be more pleased with the results. it has both a modern and a scrappy-traditional vibe at the same time.

it feels really good to have both these quilts complete and in rotation for the first of the year. they've always felt a little like valentine's day to me, so we're right on track to have them done for their season.

together, they were a great way to wind up one year and begin the next one.