summer fields in a quilt 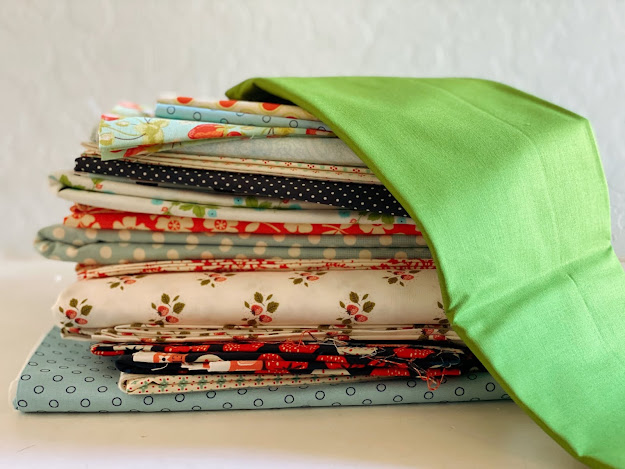 back in june, i had this idea brewing in my head about a summery version of the collins quilt. i think it was the navy blue strawberry print from cotton + steel that set me off. in the collins quilt, i'd used the gold version of that print and when i was looking at the navy colorway one day, i began to imagine a different color palette for the same layout. i have a soft spot for strawberry prints, which compels me to collect them, but i rarely use them. so i wanted to pair some of my strawberry prints with coordinating blenders in the "coins and cash" layout, using a green for the background color/cash sections. I chose kona's grass green; it's a nice fresh green color that also has a certain bit of muted softness to it which prevents it from being too loud or bright (although it tends to photograph on the bright side). 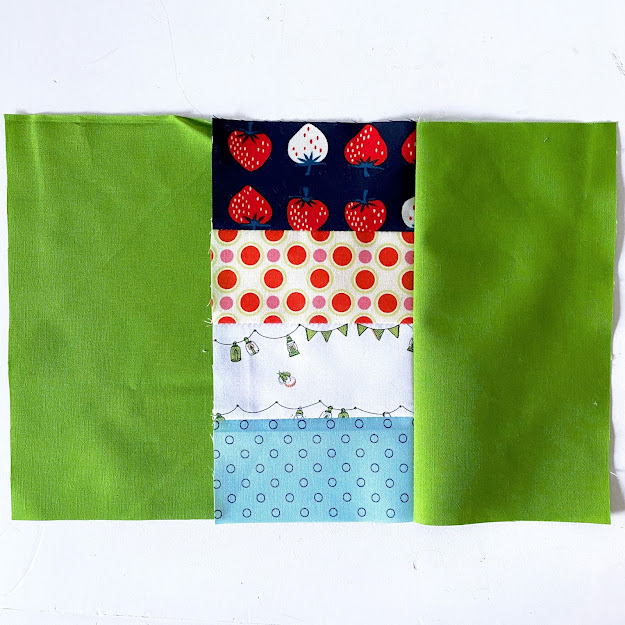 I sorted my fabric pulls into 4 color groupings that made putting the coin stacks together in a pattern easy: dark blue, red/strawberry print, low volume, lighter blue.
for some of the prints, I didn't have quite enough pieces to be in each of the 13 coin blocks required for the pattern. in these instances, I substituted another print from the same pile. I like this because it makes the quilt follow a pattern, but also have some surprises in it so it's not completely uniform. 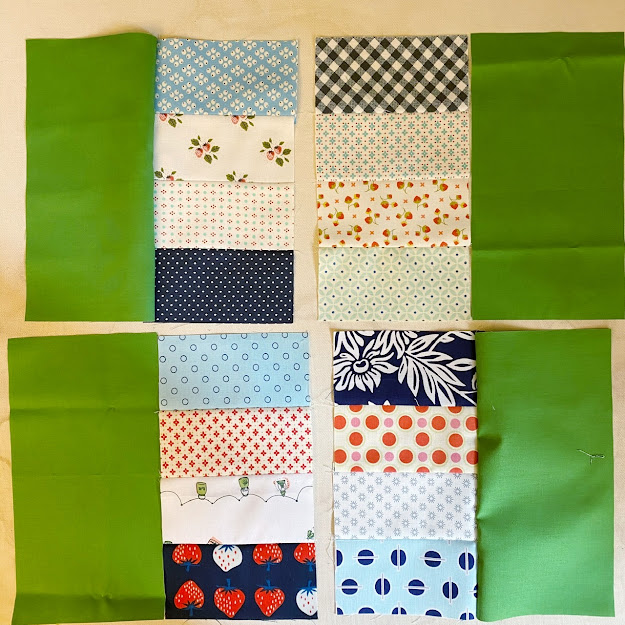 in the end, I had a total of 4 combinations of coins in this pattern, which made placing them in the quilt layout very easy. each row in the quilt has either 6 or 7 coin blocks, so I simply rotated through the piles of the 4 sets, picking up in the next row with where I left off in the rotation from the previous row. when I don't follow a pattern for assembling blocks in a scrappy quilt like this, I end up playing a lot of fabric sudoku when trying to lay the quilt out as I try to spread the prints out somewhat evenly. not having that be an issue this time made putting the quilt together very fast.
except that I chain pieced all the coins with a green cash block before assembling the rows.
this was a problem because I wanted to alternate the dark blue being on top every other coin block and I had pieced them all with the light blue being on top every time. ugh. I had to unpick half the blocks in order to assemble everything the way I wanted. 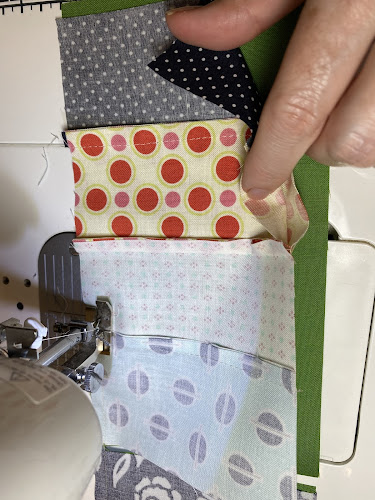 I did have one other little "home ec moment" - on this one block I accidentally picked up two of the red pieces, which were stuck together back-to-back, when sewing them together, so I had a right side facing out on both sides of this block. nothing a little unpicking and resewing couldn't correct. but it was a first for me doing this particular trick. 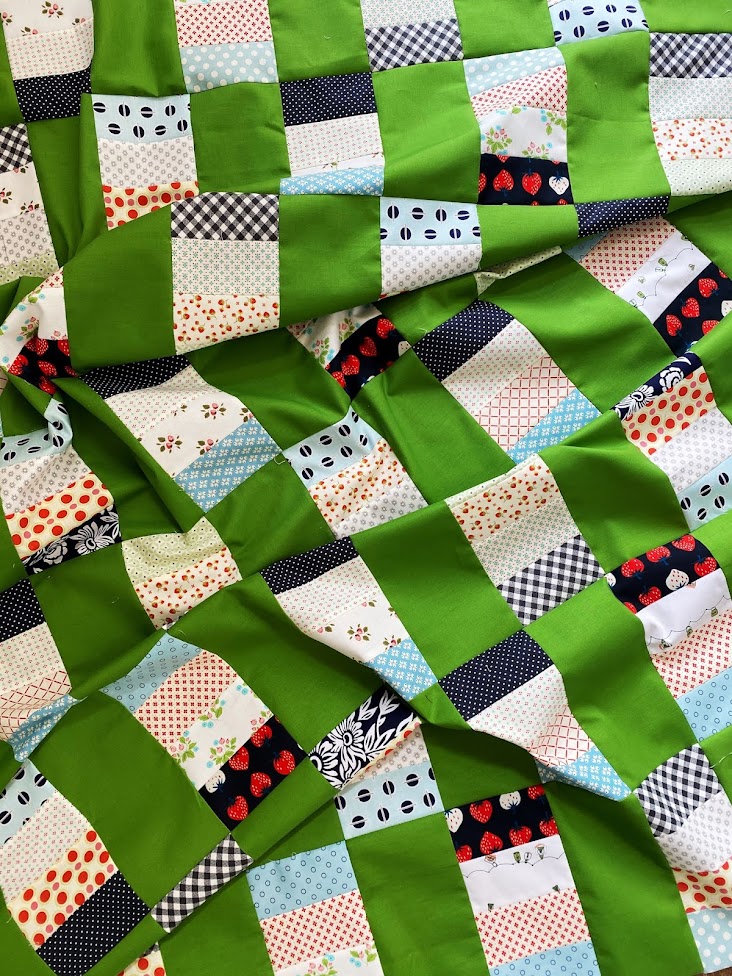 this one is now backed, basted, and sandwiched, waiting for quilting.
it's such a fast, easy make. I did the cutting in short spurts of time throughout the week, pieced all the blocks on Friday evening, and had the full top pieced together by lunch on Saturday. if I hadn't needed to unpick and resew half the pairings, I would have had it done sooner and possibly quilted by Saturday night. this next weekend I should be able to get some modern loops quilted so this one is ready to bind.
i'd like to use this layout again and explore some color play in it a little more.
i'd also like to share the pattern formula at some point.
it's such a simple, basic layout that i'm sure it's been done before. I can't imagine it's an original idea, although I don't remember seeing it anywhere myself. because it consists of 4 stacked "coins" (4 - 2.5"x4.5" cut coins making a 4.5"x8.5" cut block) paired with a solid block (4.5"x8.5") that reminds me of a paper bill, which i'm dubbing the "cash" block, i'm referring to the layout as "coins and cash." I had thought of something like "fields and pastures" or something that referred to it looking like cultivated rows offset by open pastures, but as the "coins" are actually a thing in quilting, i'm going with "coins and cash."
Posted by hydeeannsews at 6:45 PM 1 comment: