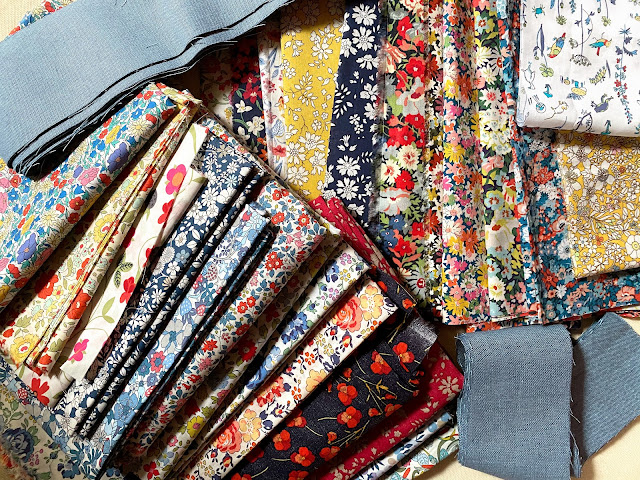 last year, i pulled a big pile of liberty tana lawn prints that had blue in them. several of the prints were some that i was less than crazy about. i do have quite a passion for liberty tana lawn, but it's very specific to certain prints i like. i don't just love liberty for the sake of it being liberty, as nice as tana lawn is.

so sometimes i order prints online and when they come they don't appeal to me much. either the print just doesn't look as i'd envisioned from the online thumbnail print or the colors are different than they appeared on screen. it happens.

i had this idea to use some of these prints, which felt sort of fall-ish in many cases, together in a quilt i might give to my neighbor. just because i didn't love all of them didn't mean someone else wouldn't.

or maybe it would just be a fall version of our liberty + chambray church lap quilts, a series i've been adding to over time. i was uncommitted to the final destination of this quilt, i just wanted to make it.

i had a small batch of 2.5" chambray strips leftover from previous liberty + chambray quilts. i decided i needed to use these up and only these in this quilt. each quilt i've made in this series varies in form from the others. this one was going to be vertically oriented strips and there would be more liberty prints than chambray in it (one way to use up those less-loved prints). 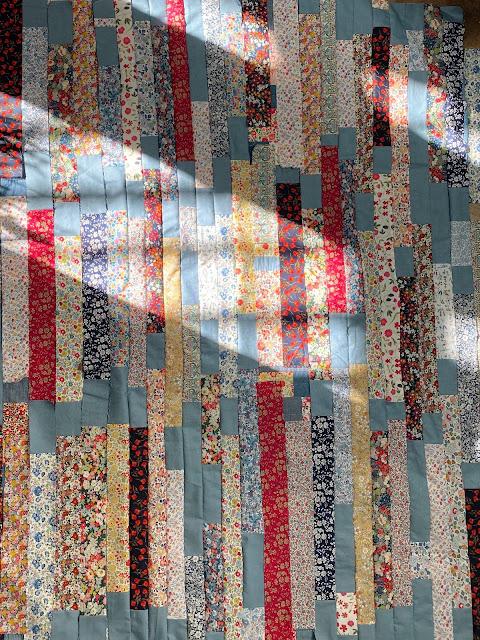 somewhere along the way i put in some other primary colored strips, which changed the feel to be less autumnal, but was still heavily blue. in my mind, i was calling this "liberty blues make do," a variation of the first quilt from the series, which i called "liberty makes do."

the strips lengths in this quilt are all improv cut. it's supposed to feel scrappy and put together from leftovers, having a "make do" with what was on hand feel. so i built the rows from various lengths, one at a time. each row generally has 3 long pieces of liberty with short bits of chambray on the ends and between the prints.

i got several rows done and really did not like what i was seeing. it felt awkward and ugly and so unappealing. i decided it definitely wasn't going to the neighbor. i didn't even want to finish it. i added in some more cuts of some of the prints i like best and some stronger high-volume prints (like the dark "capel" and "ros" pieces) to balance out the many low- or mid-volume pieces.

many projects hit that "what have i done?!" phase, but this one felt especially bad. i put it away for a while. then early this year i just decided to finish it and get it over with.

when i got the rows all sewn together and took a photo of it, i thought, "wow. this looks so much like holly hobbie!"  holly hobbie was a popular artist in my late 70's/early 80's childhood who drew pictures of little girls in pioneer bonnets and patchwork dresses with aprons. maybe her pioneer style was popular because it was concurrent with the "little house on the prairie" years which all of us girls were also watching on television. i had holly hobbie bed sheets and probably the lunch box and doll, too. 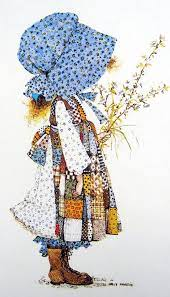 this image, in particular, is classic holly hobbie to me. and it's exactly what i was thinking of when i looked at my ugly liberty + chambray quilt top.

i posted the image on IG and a few other ladies agreed with me about the holly hobbie vibe. that may be when my feelings about the quilt changed. 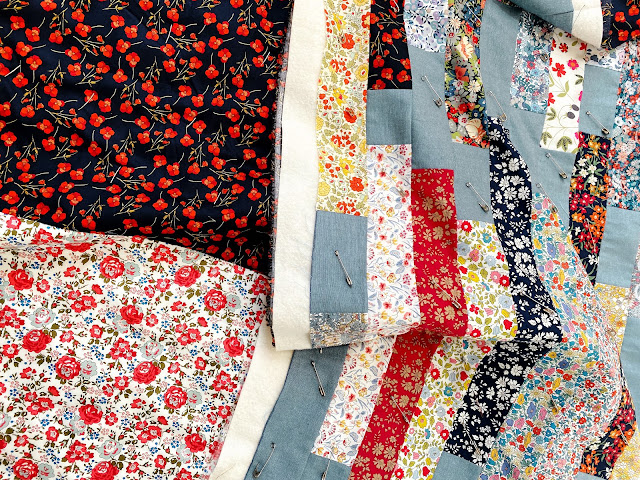 i made a backing for it out of a red and blue version of "felicite" i bought while at the liberty store in london, summer 2017, and a red and navy colorway of "ros" i had purchased because it matched a skirt i got that same year. that piece of "felicite" had fallen out of favor with me since i'd purchased it, and i had it in mind for that backing when i was considering giving this away. but i like it paired with the high-contrasting "ros" on this backing very much. 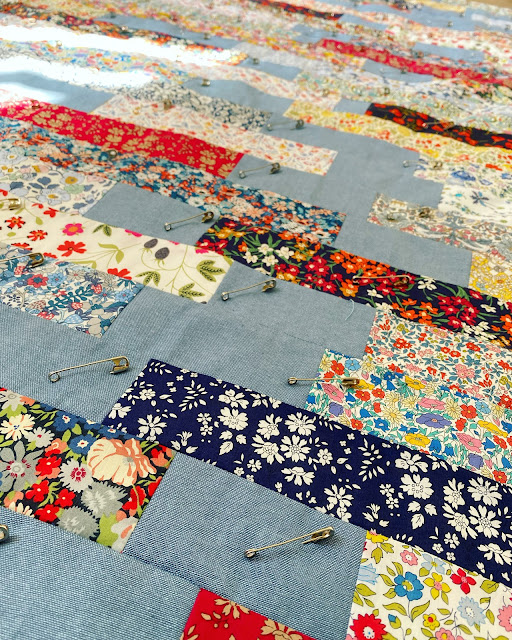 a few weeks ago my youngest daughter and i cracked open the sewing room doors for the first time in months to get her quilt top basted because just because i can't quilt lately (travel, lots of focus elsewhere, a house purchase and planning consuming my all) doesn't mean she shouldn't. and while we were at it, i stumbled across the top and backing for this quilt and decided to baste it for myself.
why not?
i've taken a liking to my homely holly hobbie patchwork made from fine liberty lawn. something about how not-pretty it is has really grown on me. it feels like something that could have been pieced together from parts of my childhood. it feels familiar and comfortable and right.
and it feels like i need to keep it for myself, because i don't think it will appeal to or speak to anyone as it speaks to me. it sort of tells me a story about myself in a way i can't quite explain. i feel rather like a mother who loves her plain-faced child as no one else can, and i couldn't bear to send it out into the world to be unappreciated or undervalued
the plan now is to get it handquilted with some straightline echo quilting in aurifil 12wt thread in 2022 white, just like all my other liberty + chambray ladies.
Posted by hydeeannsews at 8:16 PM 1 comment: