six and one half dozen quilt pattern 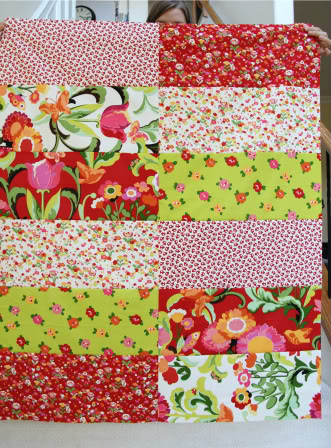 my mom had a saying that went "that's six and one half dozen of the other." it took me a few years to figure out that what she was saying was "they're both the same" or "that's two ways of saying/doing the same thing." because, you see, "six" is the same as "half a dozen."

it stuck and i use it all the time (along with other family expressions that have been passed on for generations now: "no, no, fluffy," "the bus is leaving," "for cryin' out loud," etc.) when i started a second quilt after the same pattern i created for star cookie, which uses 6 fat quarters, mom's expression kept coming to mind, which is why i think i'll name this pattern "six and one half dozen". it does, after all, consist of 6 fat quarters cut in half, placed in two rows, so you actually have six on one side and . . . a half dozen on the other.

this quilt top is about as absolutely simple as they get. i've decided to share basic instructions for how to make it. it's beyond the scope of this tutorial to give detailed instructions on quilting basics like how to square off fabric or bind a quilt. the good news is, those topics have been covered thoroughly and extensively elsewhere, many times over, in books and online. 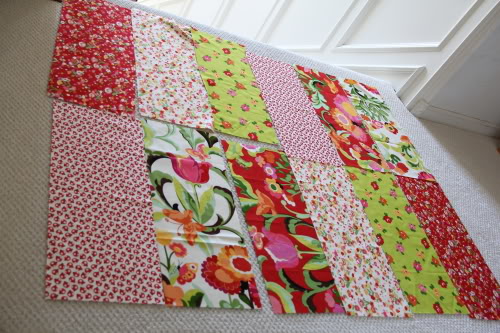 start by squaring off your fabric quarters and removing the selvages. then cut them into two 9x21'' rectangles. (this is why you can use fat or skinny quarters - you're just cutting them in half either along the length or the width depending on how your quarter was cut.)

arrange your rectangles in two rows in a pleasing manner 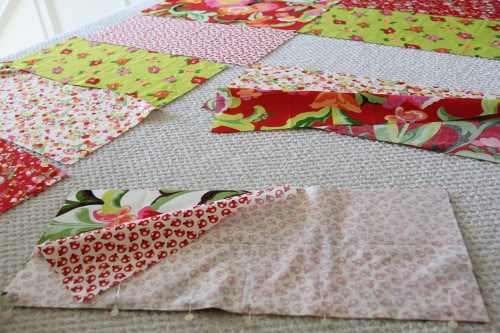 begin pinning them together by folding the bottom left hand rectangle on top of the adjoining rectangle, right sides together, and pin along the seam. do the same with the next two rectangles and the final two in the row.

***tip - this is where i found it helpful to have photographed my layout because no matter how well i mark placement or think i'll remember even a simple one as this, i always get something turned around. so having a reference photo was super helpful.

go sew and press your seams
square off you fabrics if you need to. i only removed the selvages and measured the 9" across the width so my lengths were slightly different. i just square up after each seam to get them even. 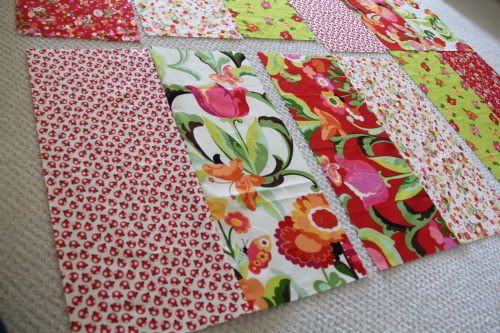 now you will have three squares, side by side. fold the left hand square over the middle square, right sides together, pin and sew like you did the rectangles. press open the seam. put the final square, right sides together, on the middle square, pinning along the seam. sew the final square and press your seam. trim if you have any sections longer than the others along either length.

your first row is complete. 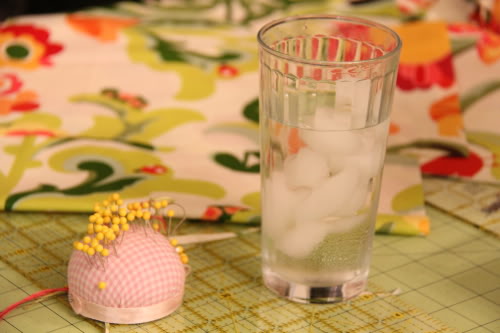 stop and drink a glass of water. seriously, we all need to stay hydrated!

repeat the above steps for the other six rectangles in your second row. 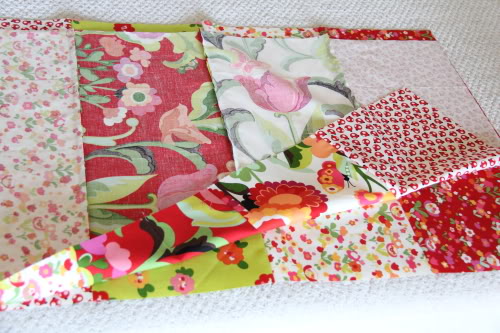 when you have two rows of six rectangles adjoined, put one on top of the other, right sides facing. 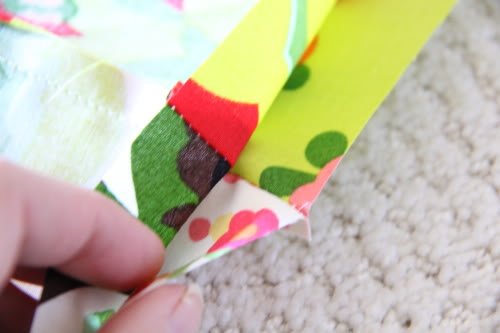 you'll want to line up your seams between the rectangles with the ones across from them to create nice intersecting seams on your top. start with pinning at the very middle seam. 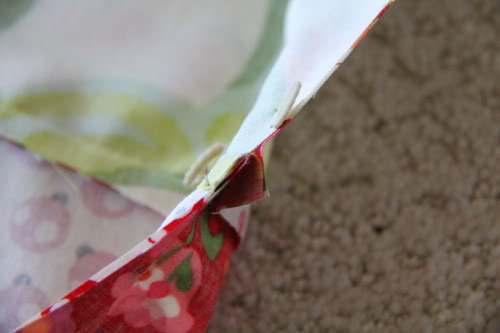 to pin, line up the seams and pin on each side, with one pin in the pressed seam allowance to keep it flat, which i didn't do here so you could see how the seams are together. but do pin down your seams. it makes it much easier. (you can't tell where they're placed very well from this picture because my pins blend with the fabric - sorry. look closely and maybe you can make out the ivory colored, flat, round pin heads and pins on either side of the seams.)

after you've pinned the middle seam together, pin the seams to the left and right next, working your way out toward the edges. then go back and pin twice between each seam.

you may have a little slack between seams if your cutting or seam allowances weren't precise. pinning them first will allow you to have clean intersections and make up that slack. just keep your pins in place as long as you can and watch that your seams don't shift.

now simply sew that baby from top to bottom, being careful when you approach the seam intersections. press open.

you've got a completed top!

i did all of this in one afternoon nap session (the baby's, not mine - ha), which was probably between two and three hours. easy-peasy. 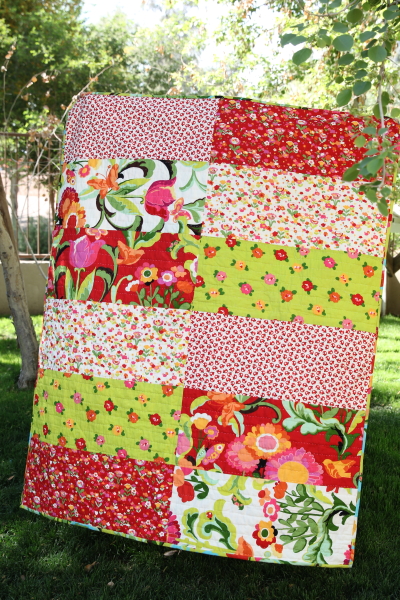 you can see more about my completed version, named "expecting blossoms," here. 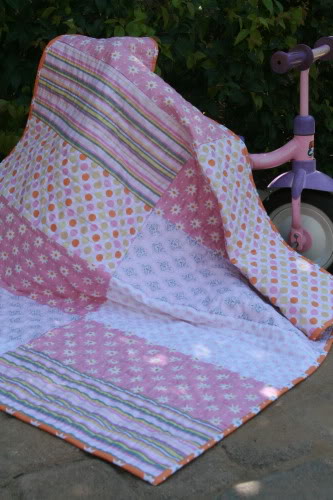 when i made star cookie i only used 5 different fabrics. i used the main fabric, my daughter's favorite which was also the backing, twice (or for four rectangles) on the top so it was more dominant and noticeable. so i purchased 4 fat quarters and 2 yards (one half for the 4 rectangles on top and 1.5 for the backing).

i'm considering turning some of the squares on their sides so it looks like six large blocks rather than two rows, but will have to change the dimensions so the squares are actually square.
Posted by hydeeannsews at 12:00 PM

Email ThisBlogThis!Share to TwitterShare to FacebookShare to Pinterest
Labels: 6 and 1 half dozen, quilts, tutorial