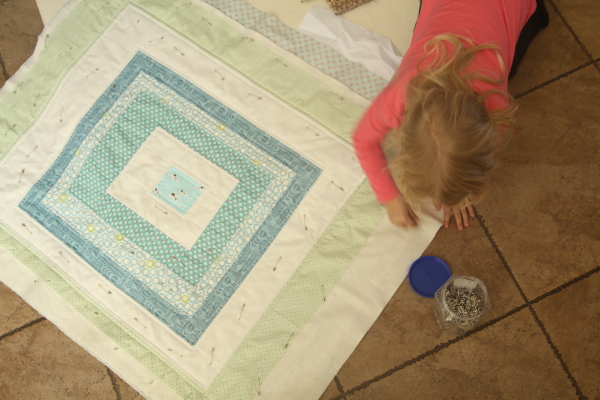 i try to involve my kids in my sewing as much as possible. my aim is to not only give them happy memories and associations with sewing, but to teach them as i am learning, too. besides, i don't want to be lost in my sewing world why my children grow up unnoticed on the sidelines. if i can sew and spend time with them, it's a good thing.﻿

my own mother was a prolific and accomplished seamstress who made most of our clothing for several years. once there were 8 of us, the wardrobe making slowed down to mostly sunday  or special occasion dresses. i do remember the trips to the fabric store, the pins in the shag carpet (and our feet), cutting out patterns, the whir of the machine. however, beyond our involvement in selection and maybe some pinning and pattern cutting, she did the sewing herself.

i know she meant to teach us and rather thought she was as she went along. but really, i had no idea how to sew other than the few lessons i had from home ec units. i knew how to thread a machine and that you were supposed to line the arrows on the pattern pieces up on the fabric grain. mom did teach me to cross stitch, just not to sew. despite my lack of learning, those early experiences instilled in me a positive outlook on sewing and a feeling of competency should i choose to give it a whirl. 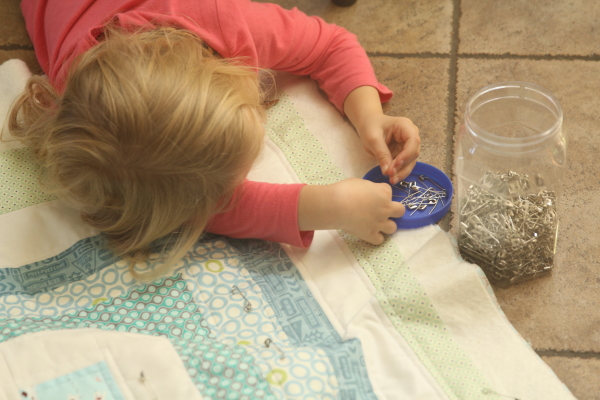 this is one of the reasons i try to involve my own children so much. although they all show interest at times and will help periodically, i have one little person who routinely shows up at the machine. i have to be very careful when she's around because she loves to push the buttons on the machine, unasked, while  i'm sewing. this is dangerous!

i'm always on the look-out for tasks to involve her in. she thinks the small dusting brush for the machine is her personal property as i've given her the job of removing lint (in safe areas). "oh! i need to get the fuzz off!" she exclaims whenever she wanders over.

she's learned how to remove basting pins for me, a task i gladly leave to her. when it's a big quilt, she can do it as i am quilting. however, when she tried to do it with this baby quilt, it kept pulling at my stitching. so i just left them in and turned it over to her when i was done. she took her own sweet time removing them, which i enjoyed watching.

last night she also helped me pin a 4sq i was putting together. she thought it was so fun to count all the pins (great homeschool lessons since she really needs practice with this). it was a little unsettling when she wanted to remove the pins as i sewed, but i felt it important to take the extra bit of time to allow her to do the task. i also allowed her to push the machine buttons for me at the appropriate times when directed by mama. we constantly talk safety, which is slowly sinking in.

hearing her exclaim, excitedly, "you're teaching me to quilt, huh, mama?!" was worth all the patience allowing her to help requires of me.
Posted by hydeeannsews at 12:31 PM

Email ThisBlogThis!Share to TwitterShare to FacebookShare to Pinterest
Labels: sewing with kids