a small but real finish

the last few Fridays, I've had no "real" finishes to share - just fake ones that let me slip through the door and get some linky love from wonderful quilty people out there. but this week I really did finish not one, but two projects! so my link in with finish it up Friday is totally legit. (you can see my pincushion tomorrow.) 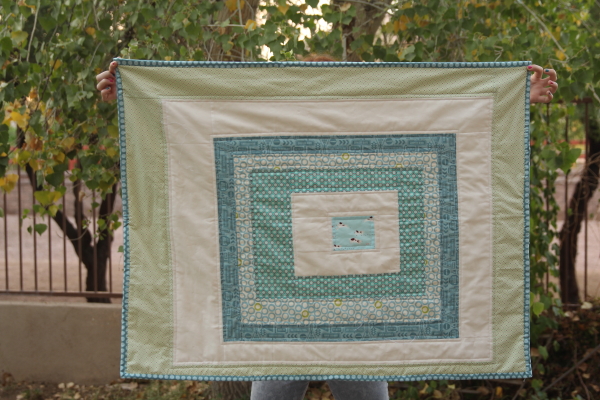 this is the first time I ever attempted improv piecing.  I was inspired by beth's patchwork frames baby quilt at plum and june. I was even going to follow her tutorial for the pattern. but when I sat down to sew, I didn't feel like making exact measurements for cuts or doing the patchwork ring. too much work for the mood I was in. so I just took her great idea as a jumping off point and went with whatever happened. I let my 11 yr old daughter (d2) select the order of fabrics for me. 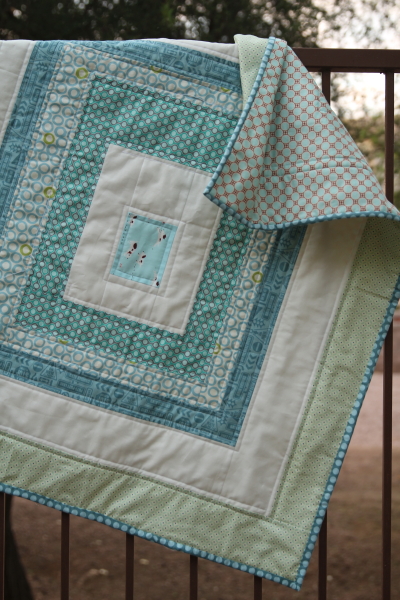 i'm pretty happy with the way it turned out although I learned a thing or two by what I don't like as much about it. namely:

1) it's not wonky/off-centered enough in the frame sizings. some of the strips almost look like they were meant to be cut the same but weren't. next time, i'll make the constrast between the strip widths greater so the boxes stand out more from each other and the off set nature of them is more noticeable.

and 2) I wish i'd got more color contrast in those 3 center rings between the whites. those 3 strips are so close in color that they almost make the other blues not fit because they match and the others don't. it's got to be either matchy or not matchy to work best, I think.

also, not a major issue, but I realized the other day when my baby tried to walk across it and I panicked that she would get it dirty, that this very light color scheme might be difficult for the mother to keep clean! oh, well. it looks sweet and very baby at the least. 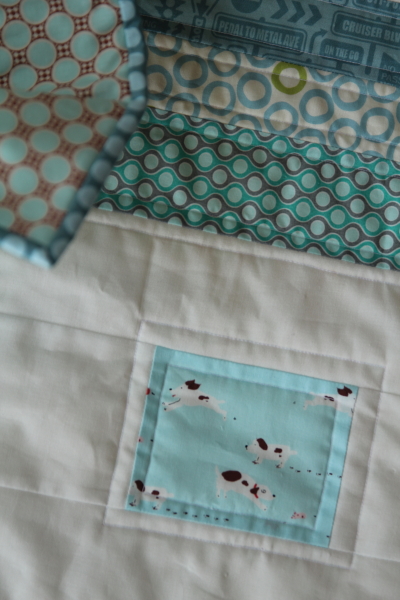 for quilting, I chose to keep a soft feel to the quilt by just echo quilting the insides and outsides of the frames. I was trying really hard to sew accurately, so I made myself sew on "turtle", the slow setting on juki. it took ages and ages. but I think it helped some.

I love the little center accent patch of puppies from aneela hooey's sherbet pips line. I've got loads of pips that I've yet to cut into so it felt good to use this here. and it inspired my name for the quilt, too.

i'm torn between using "patch the puppy " and something with "spot", though, because I like the p alliteration with the first one and I think if I used spot it would also refer to all the polka dot/spotted prints in the quilt. 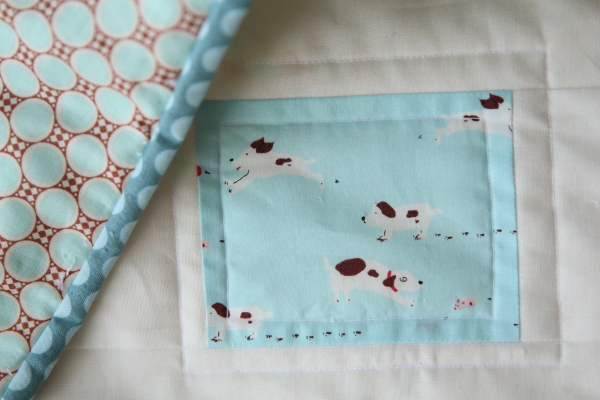 but "patch the puppy" it is.

I used an amy butler aqua dot on the back and an adorn it dot for the binding. normally the print on the binding not being straight would bother me, but for some reason it doesn't here. it was the best color choice by far from my stash, so I used it.

I love a quilt that comes together in a few sittings. this one was about a week total of sewing here and there as I got the chance. now to get it delivered!

also linking in with Kelly at needle and thread thursday
Posted by hydeeannsews at 10:37 AM