i think i've proven that epp can really go anywhere. 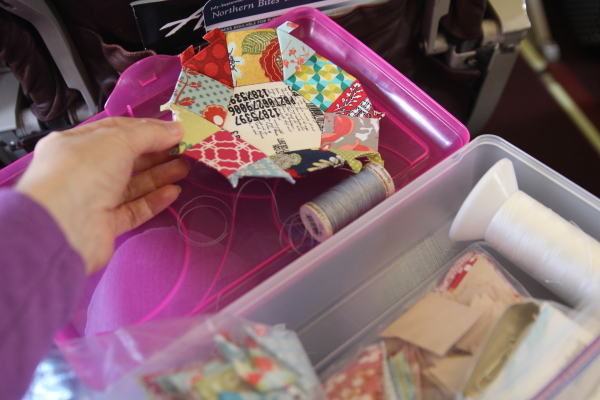 i've been traveling again - which means epp  sewing on the go. I know these blocks are all looking the same and the novelty of seeing them has worn off, but they're what i've got to show. after sitting in 2 airports and enduring 2 flights to get to fresno, ca, I have 2 new blocks completed. all in a day's work. actually, a full days work: 2 blocks. but as liz said, if i keep gadding about the country, i'll have the quilt completed in no time!

this time I put just a few supplies in a hard shell pencil box, which worked out really great. not only did it accommodate my large cone of thread, it kept everything protected in my backpack. 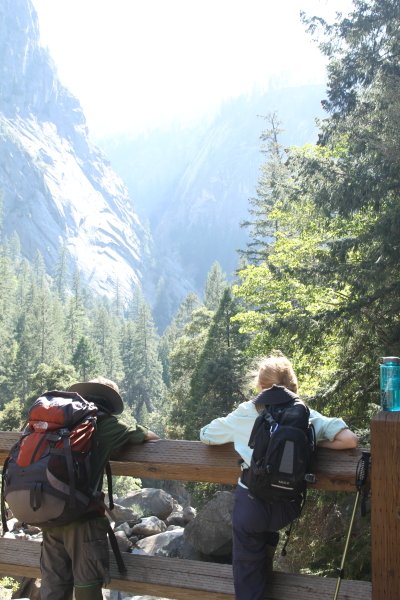 oh, yes, I said "backpack" because we went backpacking - the kind of rugged camping where you carry absolutely everything into the back country on your back: water, food, bedding, sewing. everything goes in on your back. the mr packed me a nice light 25# pack and i added about 5 more pounds with my camera and sewing (that was mostly camera). actually, I carried a backpack on the plane with the pencil box in it and then just took a few pieces in a ziplock in my hiking pack. that distinction should be made. but we did backpack and the hard shell box did work really well keeping everything crisp in my backpack while traveling by car and plane.

we took two of our children, d2 (11) and s2 (9), to climb Half Dome in Yosemite Ntnl Park, my husband's old stomping grounds. he grew up just an hour south of there and backpacked with his family every summer. 21 years ago, when we were dating, I climbed Half Dome with him and his family. i passed the test and got in the clan. that's when I was an energetic college girl who walked to work 2 miles and back every day. fortunately my place is secure because i'm not the same girl these days. but I did manage to make the rugged 4 vertical miles into base camp with that 30# pack on without crying or even whining. childbearing may have wreaked havoc on my body, but it also toughened me, too. either that or my pioneer-crossing-the-plains blood from my ancestors came through and helped me out.

day 2, I got some down time while the mr filtered drinking water and did all the breakfast work around camp. rehydrated bacon and eggs in a pouch, anyone? I pulled out my epp  and basted some triangles. I thought I was going to have more time lolling around in camp, but we squeezed this hike in pretty tight. it was march, march, march all the way. 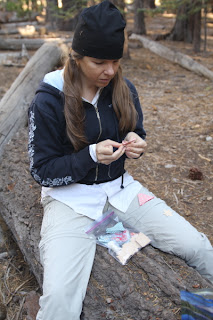 we didn't pack in any chairs, but fortunately there were logs everywhere in camp to sit on. between my pant leg and the log, I got set up to sew nicely. please ignore my "I did not sleep in the tent" puffy morning face and gnome hat (dang, I was going to crop that). this is the wilderness, people, not girls weekend glamour hour.

I justified bringing along the sewing by saying that if anyone needed stitches, I would be equipped to help them. fortunately, all I was called on to do was baste triangles. when it came time to hike more, I put the sewing away and left it in camp. day 2 we were summitting HD and there would be no time to sew along the 8 mile way. 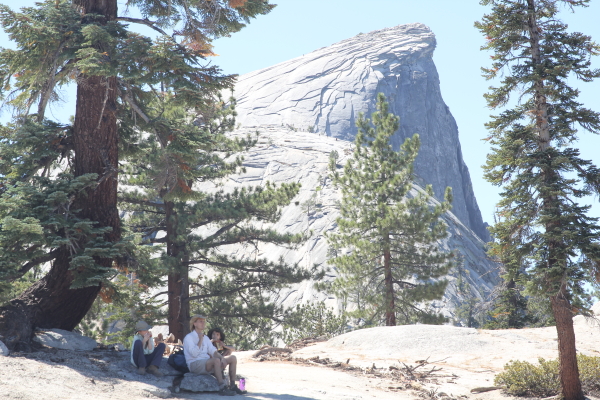 after about 3.5 vertical miles, we reached the shoulder below Half Dome (that peak in the background). i made it about half way up the wicked, nasty stairs quarried into the side of sub dome before vertigo stopped me. sadly, i did not summit this time. i got myself back down and waited for the others a while before attempting again. i made it nearly to the top of the stairs again before i got too woozy. 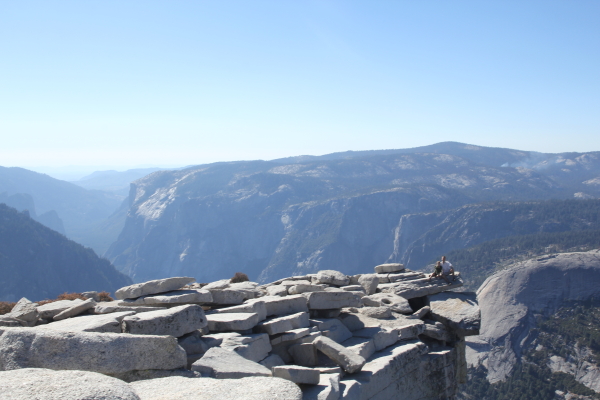 the mr. muscled our daughter through the climb and our son, the mountain goat, did it all on his own. they made it to the top of the world. you can see the males hanging out there on diving board rock, nearly 5,000 feet over the valley floor (photographed by d2 from a safer distance). nothing in this photo gives you a real concept of this summit, by the way. it's definitely something only experience explains.

so i didn't make the top this time. i still trooped back down nearly 4 vertical miles to base camp that afternoon, slept a lot better in the tent, and survived the last 4 miles down on the last day. down, by the way, has it's own troubles. but i'm not whining.

after a nice hot shower, sleeping in a real bed, and restaurant food, we spent the next morning in mariposa grove's sequoias before heading home. these trees are unbelievably huge and tall. like, between 200 and 300 feet tall. i'll give you a sampling: 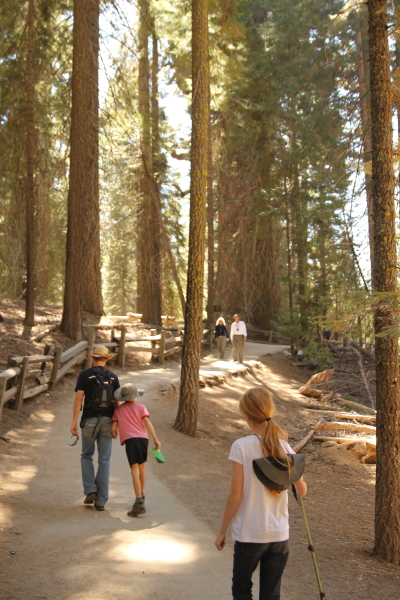 
i was far too pooped to sew on the flights home. i got about 4 squares basted before giving up. the epp will wait til another day, another trip.