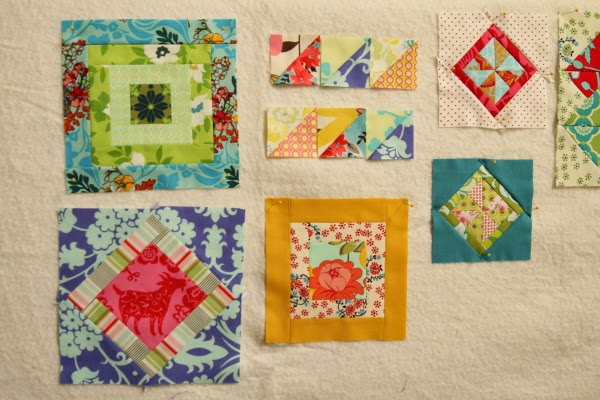 i had a mid-week sewing fest last night. the mr took some of the older children to a sporting event so i had the evening pretty much free at home. d2 made a simple dinner for all of us (once she realized mom was in the sewing zone and might not come out to make dinner for a while) and the 3 littles hung out with me in the sewing room. i did take an hour break to help d4 create something tiny and quilty, which i'll share later. otherwise, i plodded along with my gw blocks. i was supposed to be making march's blocks, but after the first courthouse step block, i just kept going with those. 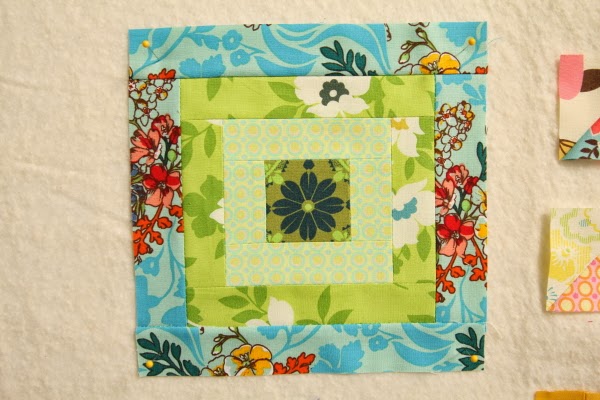 this is an 8" courthouse step block. it turned out a lot cooler-toned than the other blocks i've made so far. i purposefully chose the outer border to include the blue for a tie in with the cool colors as well as the warm colored flowers to help tie it to the rest of the quilt. i almost got the fussy cut center right, but somehow was about 1/8" off. it's not too bad, though, so it works for me. 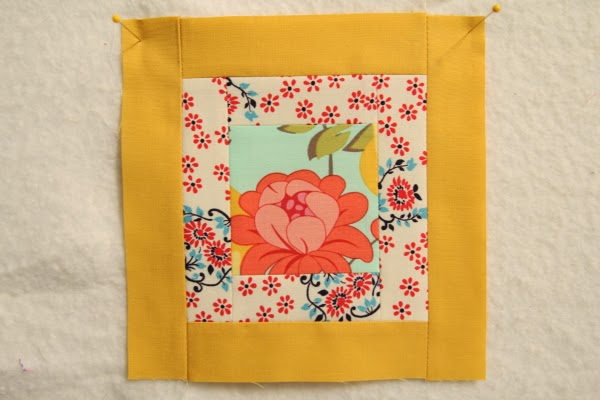 this fussy cut center is also a little bit lower than i would have liked, but i cut it from a scrap, so it is as it is. i still love it! the yellow modern solids ii does not have as much color play as the teal i used on the pinwheel, but i do like it with the other fabrics.

i am becoming a solids convert! well, sort of like i am a denyse schmidt convert: i am learning how to use bits and pieces to compliment and enhance my designs. in fact, while deciding on my color palette and pull for the triangle along quilt, i realized i absolutely love solid triangle quilts! so i've ordered more of these modern solids ii and a few other almost-solids for that quilt. i'm actually pretty excited to work with more solids! (as might be indicated by the unusally high number of exclamation points in this paragraph.) 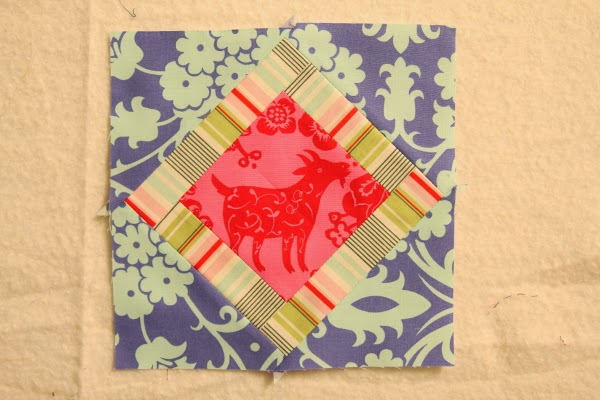 as i was working on the courthouse step blocks, i kept trying to find a use for my goat sample piece sent to me by cia. however, it was a little too big for any of those blocks. so i hunted through the pattern book for a block that could utilize this piece. i found a courthouse step sq-in-sq block that would work. i still had to cut off a bit of one of his feet, but it was the best i could do. my 13 yr old quilting critic son had to point out the missing foot to me. i explained to him that if i had moved it over to the left a little, the goat would not have enough "room to breathe" with his nose right up against the seam. the mr chimed in with, "yes, goats need to be able to breathe." s1 followed right up with, "well, he can get enough oxygen from all these flowers around him. he could still breathe."

fussy cutting that goat at an angle was no small task. a 4.5" square ruler would have made it a whole lot easier, but i dont' have one of those. i kept thinking i was going to mess it up and then i'd be out a goat. yeah, it's just fabric, as they say, but i only had one bit of this and there was no room for error. fortunately my late night brain functioned for me. however, i did cut the squares for the outer triangles wrong and had mull over what went wrong for a bit before realizing it was a 1/4" too large on one side. oh, so that's why my triangles weren't symmetrical! fortunately, i was able to salvage them. too big is a lot better than too small in most cases. the gypsy goat still needs an outer border - green, i think - but it's looking pretty. that heather bailey dandy stripe from "nicey jane" is awesome! as i cut it last night, i was sorely tempted to go order a few more yards of it. (didn't - for the record. yet.) 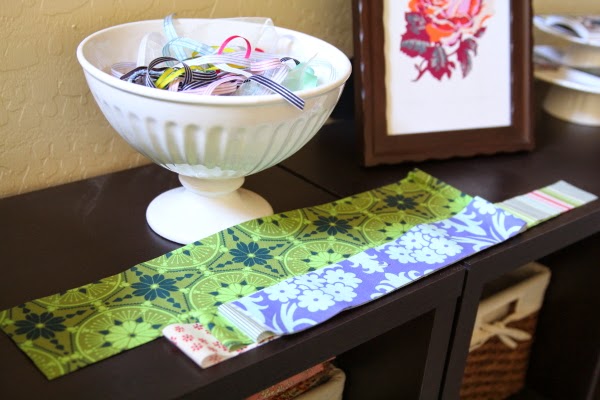 i hit on one more scathingly brilliant idea for working on gw last night: i'm now cutting strips as i go. the pattern calls for 60 wof strips, 20 at 2" wide and 40 at 4" wide. that's a lot of strip cutting and i wasn't looking forward to doing that all at once on 60 different fabrics.

so far, i've only been using small pieces of each fabric so when i go to cut, i've been lazy. i've just pressed a corner of the fabric and cut out what i need without squaring it off first. it seemed like too much trouble to square a whole piece when all i needed was a few inches.

however, last night as i thought about all those strips i'll eventually need, i decided to go ahead and press and square every time i need a piece of new fabric, and also cut a strip out while i'm at it. genius, i tell you! (maybe i read that somewhere else and it just surfaced as my own idea last night?) now i have a growing pile of strips to set aside for later. two birds with one stone, and all that. i was thinking i should use each fabric in a block and then somewhere else as a strip, too, so this is going to make keeping track of all that much easier. thank you, quilting muse, for the inspiration!
Posted by hydeeannsews at 10:30 AM