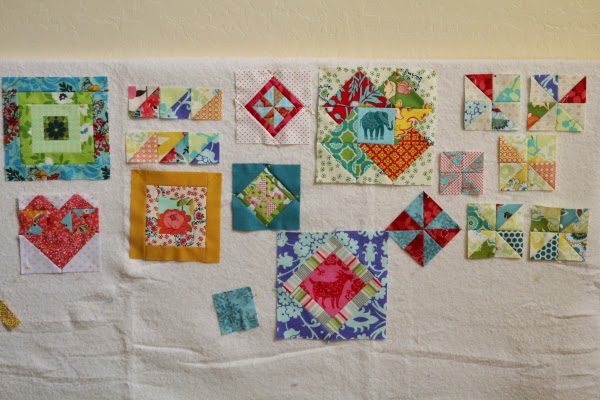 in the wake of all the hand binding and baby quilt finishes, the gypsy hasn't been touched in a bit. with the month coming to a rapid close (again?!) i am slightly behind schedule. however, i did manage this one unreported block during sarah's friday night sewalong on instagram a few weeks ago. which, by the way, was really so very fun. 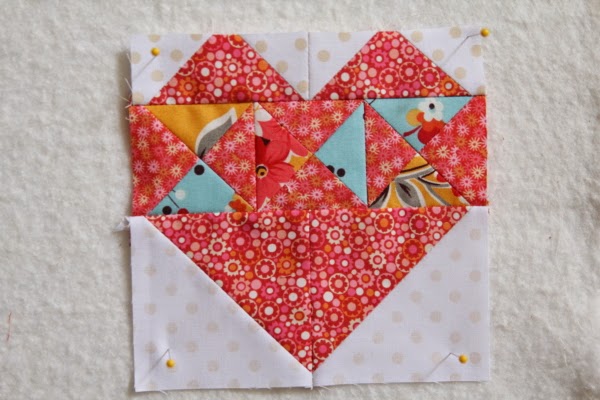 yes, this one itty bitty 6" block took me all evening and i'm not even that fond of her after all the fuss and important fabrics lavished on her. this block was not my favorite to begin with. i just don't generally prefer heart blocks and the way this one was made in the pattern with only one light and one dark fabric, it looked like it had holes in it to me.

so i decided to doctor that up and go all scrappy. this is the scrappiest quilt on the planet, after all. however, as usual, my scathingly brilliant fabric choices went slightly awry. i found a scrap pack of flea market fancy i'd forgotten about. this excited me because i realized i was wasting my very limited yardage cutting small bits of it out. however, you can barely even see what it is in these teeny tiny pieces. with only three blocks and two fabrics to place, it didn't turn out quite as i'd hoped. and then the piece in the very center that was supposed to read yellow ended up being part of the flower so now it's red and blends right in. um, way too much time and thought on one little block you say. correct.

but there's more: the two red art gallery ditsy florals. since i didn't want the center to read as a cut-out, i chose to use a coordinating print rather than the exact same print from the big pieces of the heart. but i don't think it's even really noticeable. i hope when it's sewn in with it's neighbors, all of this will sort of even out or disappear.

what i do like? the oh-so-quiet dot fabric for the background. that turned out lovely.

the only other work i've done on gypsy is some pattern sleuthing. 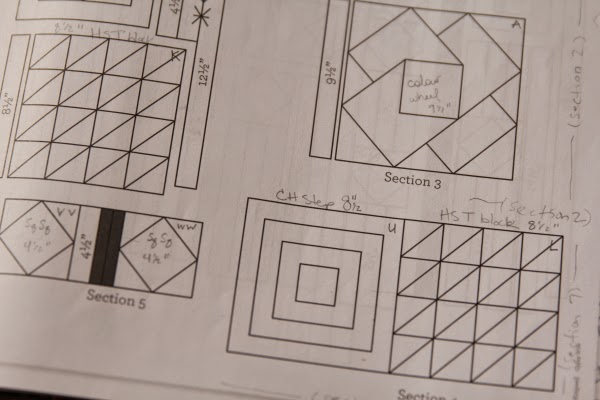 this may qualify for more over thinking, but this large and expensive pattern book is quite scant on math details. i'm not the only user who is dissatisfied. i absolutely do love the pattern, but have to be honest about how i feel regarding the way the pattern's written. it's only fair to anyone out there considering this pattern. 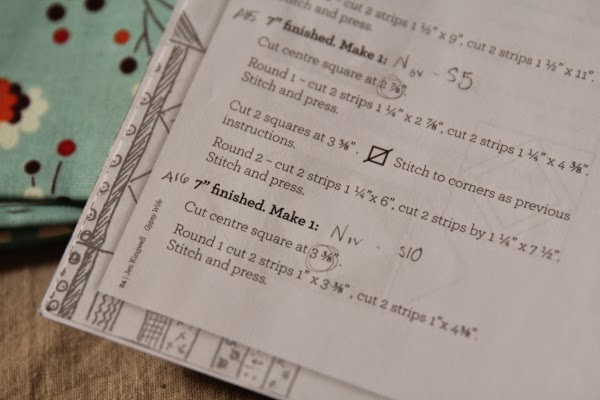 while sitting on a 4 hour flight recently, i attacked the pattern with my mechanical pencil. as i assembled blocks i started to wonder where they were going to end up in the overall quilt layout. i didn't want all my red blocks or blue ones lumped together in different sections of the quilt. so i gave each and every block in the whole quilt it's own label, which i marked next to it in the sewing instruction section and then again on the layout section.

since i'm doing this as part of a monthly schedule quilt along, i also marked the month for each block next to it in the instruction book, as well as the section where it belongs in the quilt. for example, in the photo above: the 7" courthouse step block is identified as block A16, made in nov, in section 10 of the quilt. 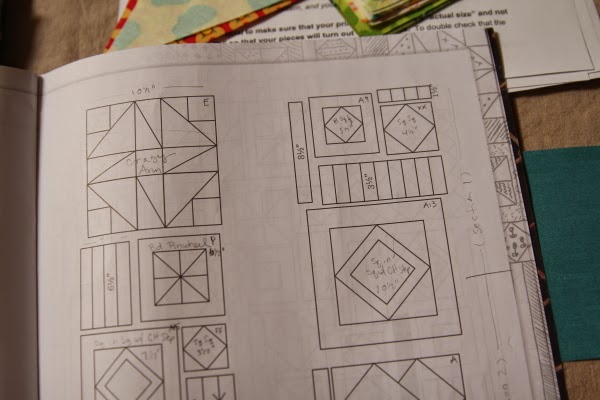 in the layout section, it's all graphics and no numbers at all except for lengths of the strips. with lots of smaller filler blocks being close in size, i was wondering which were 3" or 4" and what not. so i did all the math myself, using the strip widths and lengths to figure out which was what. and then i marked them all in the layout section. i put the name, identifying label, and the block size in each block.  also, i marked what sections were next to each other on each section, just for reference.

i can now look at the layout guides to see what's in each section and how big it is or i can look at the sewing instructions and know when to make it and where the block goes. overkill - maybe. but i feel much more relaxed now and definitely informed about what's going on here.

now to find the time to sew some more blocks!

oh, and i solved the strips math mystery, too. despite what the back of the pattern says, the strips are to be cut in 1" or 1.5" widths across the wof. just in case anyone else was wondering. thanks to nicole of snips snippets for confirming that for me even after the math was done. have you seen her gypsy, by the way? eek! she's handquilting all of it. dreamy.
Posted by hydeeannsews at 5:07 PM