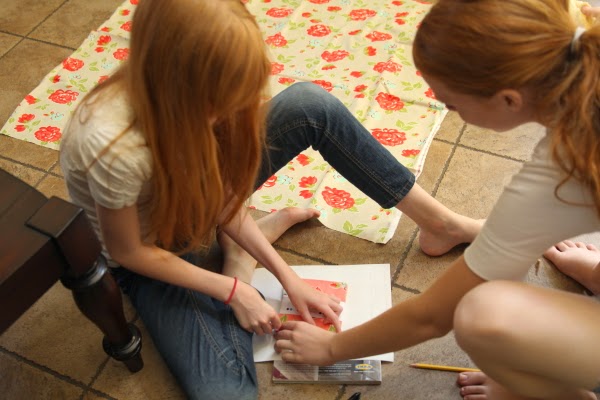 friday, i gave d2 a quilting math problem. i had one charm pack of bonnie and camille's "marmalade" for moda, one yard of backing fabric, and some white jelly roll strips. she was supposed to figure out how to best configure the charm squares as a top that would fit on the backing with breathing room around the outside, and whether there were sufficient or insufficient squares for the job. i provided no measurements, just a tape measure, but did explain about seam allowances. (now that i think of it, i should have had her calculate the binding, too.)

d2, sadly, was not excited about this. i thought she'd whip out the answer in a number of minutes once she had measured everything, or even just do it the manual way of laying it out by trial and error. but this was not the case. d1 got involved, helping her measure and giving her lots of hints, but d2 told me this wasn't a good math problem and i should figure out my own quilt layout.

i disagreed. i thought it was perfect real life math and was mainly interested to observe her thinking process. either she wasn't interested enough to do it herself or she truly was stumped because i eventually had to walk her through a lot of it (without doing the actual calculations for her) just so i could get the quilt made. this will not be the last problem i give her. i want to see her develop this kind of problem solving ability. 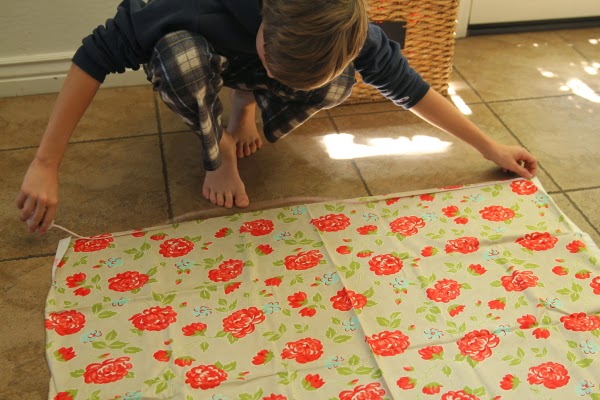 in an effort to prod her thinking, i asked s1 how he would do this and he went way overboard, calculating the area of the squares and the backing fabric then doing a bunch of division and whatnot. he was a little too brainy, exerting more effort than was needed to figure it out. however, he did give me a layout and then helped me arrange the squares and jelly strips that were needed to add sufficient length to the quilt top. 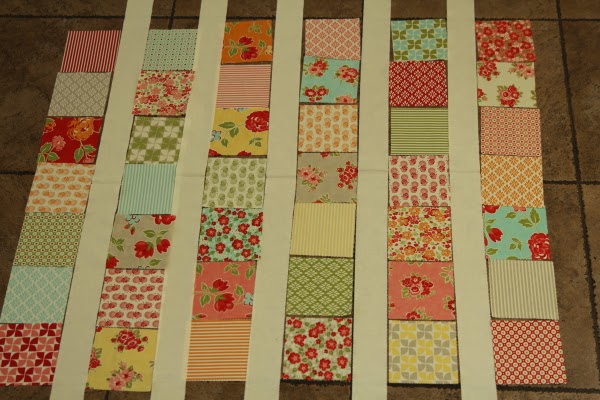 this is a crummy photo that we call a "quilt map", taken purely for reference when sewing the top together and to get another view on how the fabrics are distributed. the answer to our math problem was to lay out the squares in a 6 x 7 grid, then insert jelly strips between the six columns of seven and on the outer edges. this brought the top closest to the available dimensions of a one yard cut of fabric.

as a sidenote, why is a charm pack just not big enough to make anything? not even a baby quilt. i suppose it would suffice for a cushion. it's so disappointing because they are completely enticing the way they include a bit of each fabric for a low cost and come precut. but to really make a quilt, you must buy a handful of them.
Posted by hydeeannsews at 5:59 PM