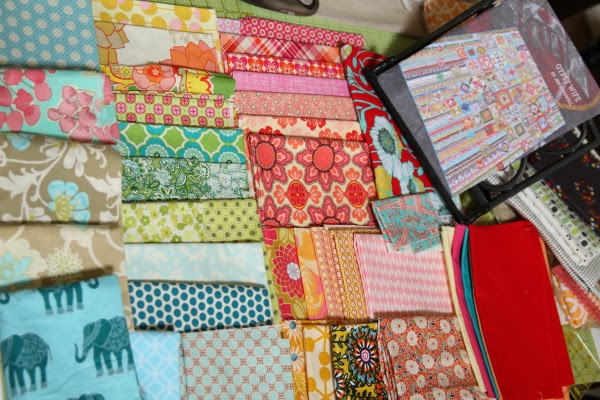 after perusing the pattern book for "gypsy wife", i decided i needed more fabrics. a lot more fabrics. part of what makes the gypsy so charming is the complete scrappiness of it. i'm still studying all the photos in the booklet (not enough, i think!) in order to figure out what, exactly, about this quilt appeals to me so that i can reproduce the spirit of it in my own interpretation. one thing i picked up on right away was the plethora of patterns in ms. kingwell's quilt. so i pulled several more fabrics from my stash that have what i consider a gypsy feel to them. for the most part, i like the way this pile looks together from a distance & in the photo, so that tells me i'm likely on the right path. 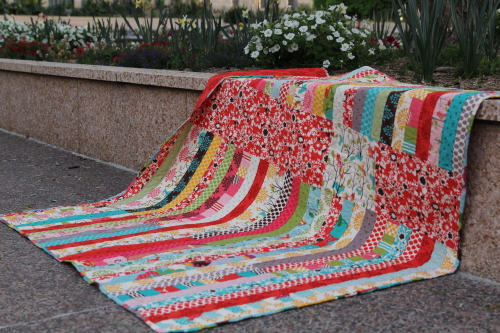 as i was cuddling up under my own "out on a limb" quilt with the baby last week, admiring all it's patterns and colors again, it occurred to me that my quilt is somewhat similar to "gypsy wife." obviously, my design is much simpler, but the multitude of strips interrupted by that one stripe do have something in common with the gypsy. i think this may be one reason i'm drawn to the gypsy, aside from it's own pure awesomeness. granted, my quilt is a much simpler, little sister version of the very grown up gypsy wife, but i see some resemblance, nonetheless. 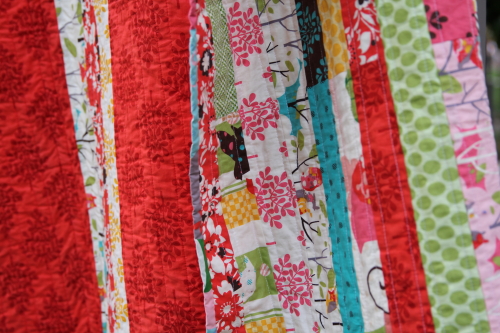 while admiring my own quilt, i thought how nice it is to love a quilt and it's fabrics even more as time goes on rather than to get tired of it. the baby and i were lying under the quilt with it up over our heads, looking at the way the light came through, bathing us in a red glow from the backing and making all the other colors shine, too. it was magical. that's when i thought to myself that i must have done something right to love this quilt even more after so much time. this isn't meant as a brag on my quilt. the feeling of satisfaction with my own work, even after distance from it's creation, is quite pleasant. somehow, without even knowing it, i got the balance of brights and pastels right in this quilt. working with a jelly roll from one amazing line of fabrics helped, but i did cull that jelly roll a bit. maybe i'll be able to pull it off again with the picks from my stash. i hope to have the same attachment to and love for "gypsy wife" whenever she's done. even if she takes over two years like "out on a limb" did!
Posted by hydeeannsews at 9:52 AM