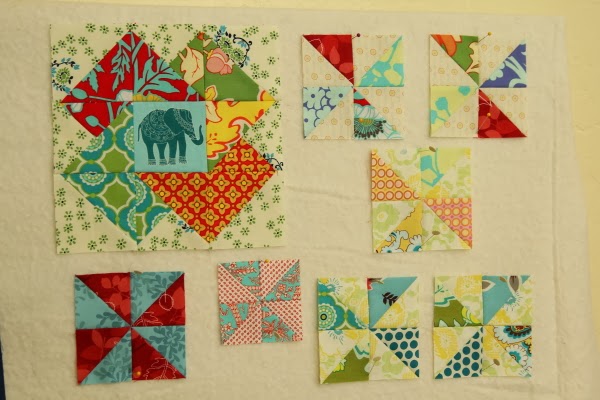 you've got to love a morning where you overhear your oldest daughter giving her little sister a counting by 5's and 10's lesson while they eat breakfast and then the 7 yr old tells you she's doing "baby daycare" for the smallest one, which means she's getting her something to eat and making her a special place to take a nap. with them all busily engaged or taking care of each other, i snuck in some sewing during piano lesson time.

my gypsy wife blocks for the month are done. or as done as i'm going to get them. four of the pinwheels are supposed to have borders around them, but i am still waffling over selecting solids or not for the borders. i'm saving that decision for later in the game.

i've used this opportunity of only doing a few blocks at a time to really focus on precision and improving my skills. please don't look too closely at my points just yet! they are far better yet not fully perfected. when making the pinwheels, i overcut the pieces, which is easy enough since the pattern calls for 1/8" increments quite often. rounding up to the full 1/2" or 1" makes life easier all around. then i trim up after the blocks are formed before joining them. doing this continually would be extremely tedious. but doing one or two blocks at a time has been much more bearable. i would never take the time to do this otherwise. 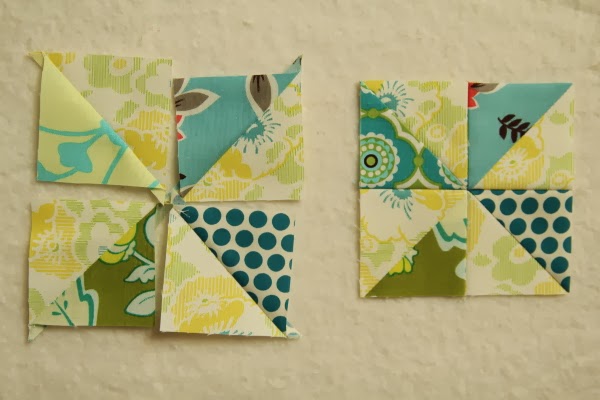 i did not make my pinwheels completely scrappy, choosing to do one background fabric and four scrappy pieces for the pinwheel. none of the blocks are identical as i worked in at least one scrap from previous blocks to make each one unique. the first two incorporated red and blue, the second set (above) was yellow, blue, and green. as i put the second block (left) of the set together, i didn't think the yellow and blue print in the upper left corner stood out enough, so i replaced it with a different fabric that had a darker yellow and blues in it. this wasn't a waste because i simply used that block and the other one created from making the new hst in the next block i made, the yellow and pink one, where it still didn't stand out enough. oh, well. moving on. 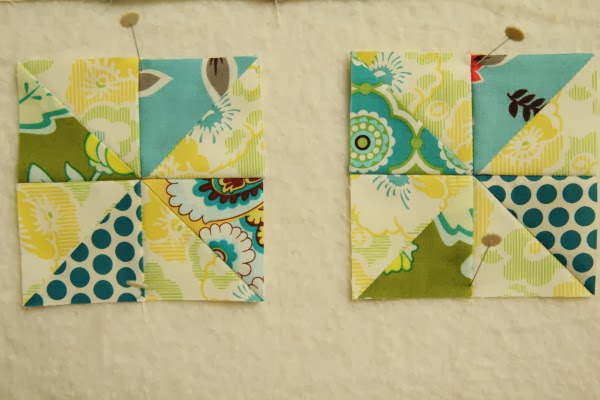 better! but i wish i had shifted the fabric just a bit so more of the blue showed up rather than the yellow, which still seems to blend. thank goodness this is just one block of dozens in a very busy quilt. i can stop overthinking it now. why is it that the points i was off by a mm on are the bright blue colors rather than those that blend in at the tips so you can't even tell how perfect (or not) they turned out?

anywho, my blocks are done just in time for next month to roll in this weekend. and the new sugar block, too. oh, boy! 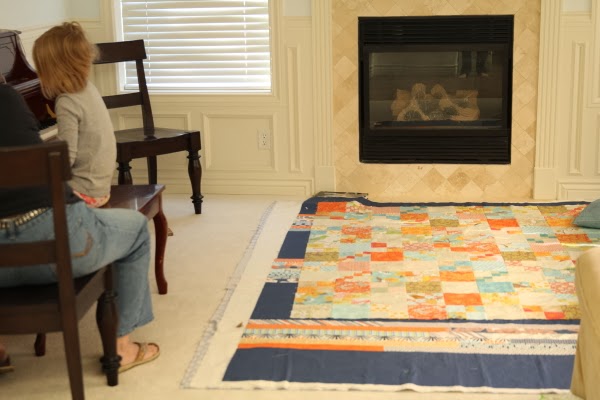 the piano teacher did not bring her toddler today, so my wip pile is still spread out on the living room floor. down to two! amazing. 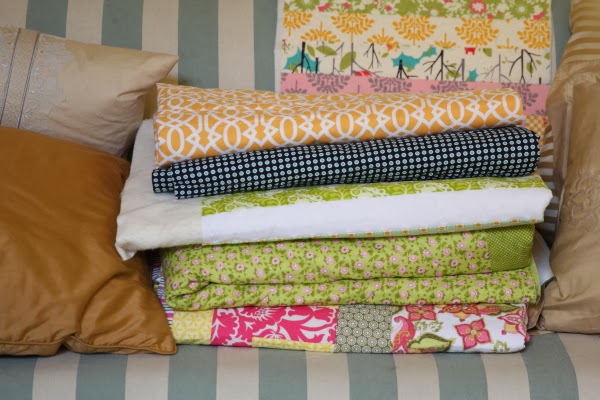 actually, that just means there are more in the "needs binding" pile on the couch in the dining sewing room, which is wip pile #2. however, they have moved along in the racket, so that's progress. i do adore binding. there never seems enough time for it, though. 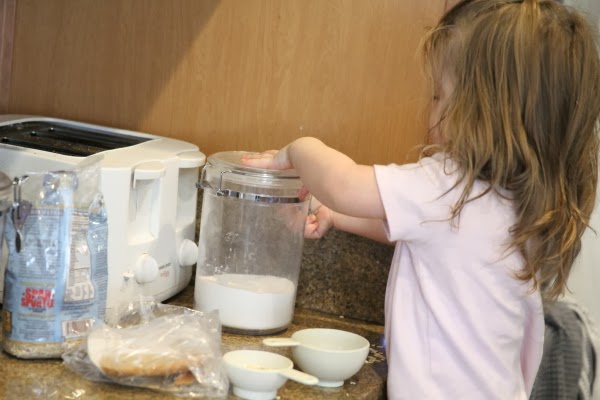 while the piano was a-playing and i was a-sewing and others were . . . a-doing whatever, this little lady decided to experiment with measuring, mixing, and pouring in the kitchen. sugar, oats, nuts, and anything in reach kept her occupied for some time. love how they are so busy learning at this stage. the messes, not so much. watching her continually reconfigure 12 lego duplo blocks for 30 minutes this morning was more enjoyable. but i do love her constant enthusiasm.
Posted by hydeeannsews at 11:50 AM