eye of the storm

i have had one over-the-top busy week. there is a local special event going on and we have hosted friends and family nearly every day, including cooking dinner for large groups of people 3 different nights. it's been exhilarating and exhausting all at the same time. having over 30 people to dinner necessitated that i pack away most of my sewing supplies in an attempt to convert the room back to a dining/entertaining space for guests. well, that attempt failed. i did get it well cleaned and organized, but i ran out of time to complete the reversion to dining table. when i moved my sewing stuff in that room, it was with the idea that it was supposed to be quickly and easily converted when needed. however, we haven't entertained enough people in ages, so i never put that theory to the test until this week. and i failed miserably. the best i got done was to have the table free of everything but my sewing machine and i pulled out the dining chairs to the front of the room as a barricade/seating spot. good thing it wasn't a formal meal! by the time the last event was over last night, i had pulled out a bunch of fabrics so my sister-in-law could make selections for her new baby's quilt and the room was starting to look pretty much like it always does (see above).
in the middle of all this chaos, i did miraculously find some spots of time here and there to sew. i made all the mini blocks for my february sugar block:
﻿﻿ 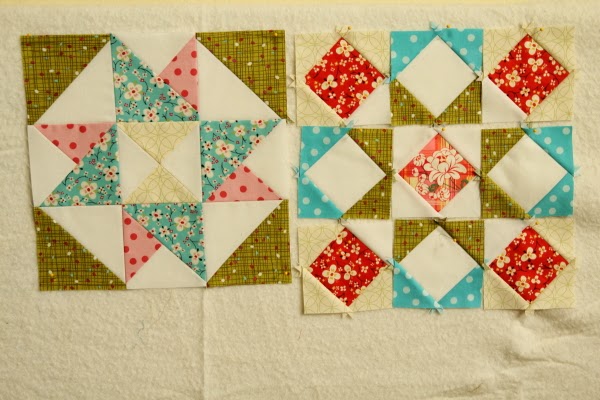 first, i made a few extra blocks for the back - which means i messed up on a couple by making them the wrong size. as relaxing as i can find it to work on complex sewing at the end of a long day, i usually make mistakes because my brain is so tired.

when making the block, i used two of the same fabrics from january's block and some of the same prints in different colors. i like all the fabrics, but when i was done with the block, i realized i hadn't placed fabrics well. those red corners are just too loud and proud, drawing all the attention away from the star in the center. i haven't sewn them together because i'm undecided whether to make 4 new blocks with quieter centers or just live and learn with it the way it is.

on the one hand, i am using this monthly block to focus on precision a little at a time. on the other hand, i don't want to get hung up with every little detail as i'm learning. if only i knew i could use these blocks elsewhere in the top, i would happily make new ones. but the rest of the top is a mystery, so i'm wavering. also, those red corners might be just fine when mixed in with the whole top. there's just no way to know right now.

saturday was one of my in between days where i carved out some time to sew in the middle of all the prep chores. i just needed to get going on gypsy wife! but it seemed the world was conspiring against me. the 5 yr old was begging to go to the park, and when i said to her, "but mommy wants to sew," i immediately knew it was not the right response. give up one of our precious spring days at the park with my daughter to sew? hearing those words come out of my mouth brought that quickly in perspective. 5 year olds and spring days are both fleeting and precious.

however, the mr decided to go to the park with the kids, so i was dismissed. i probably should have gone anyway. but the 11 yr old didn't go and wanted to spend time with me. so i sent her to my stash to select fabrics for a baby quilt she's going to make for a fund raiser. i thought it would be a good way to use up some of the older fat quarters i'm not so crazy about anymore. however, she didn't dig to the back of the stack, she brought out this lovely bundle from the front: 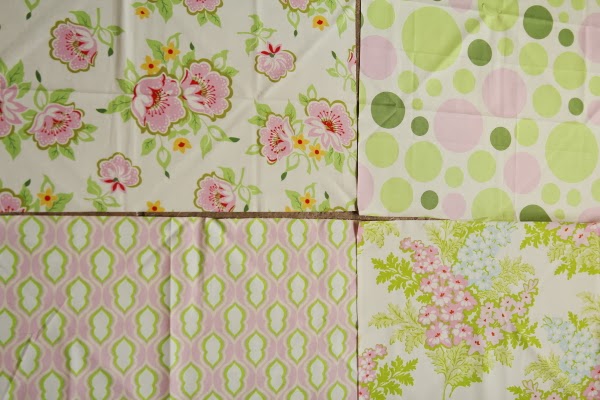 some of my heather bailey "nicey jane"! ouch. i'm still not sure i can let her have these because i know this is all i have of the two floral prints. at least i can say her taste in fabric has improved drastically. perhaps what i'll have to do is buy the quilt myself, which i rather want to do since it will be her first quilt project.

we got the fabrics pressed and squared, then i had to run to Costco before it closed. on the way there i witnessed a pedestrian/vehicle accident where i actually saw the car sitting on top of the victim. the two pedestrians hit are, thankfully, alive, but in critical condition. seeing something so tragic occur before my very eyes left me quite shaken up. i mindlessly did my shopping then came home to collapse on the couch. my husband kindly took over all dinner duties and let me rest. 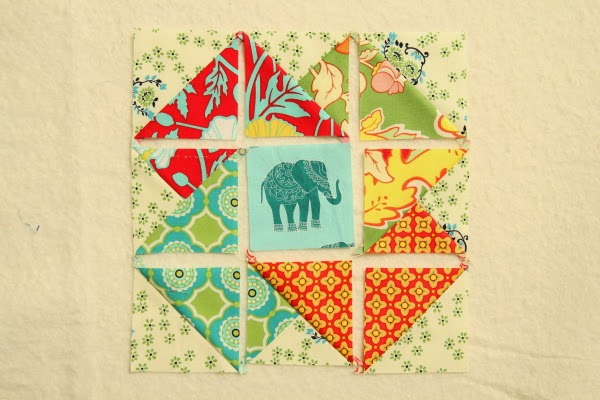 after dinner, he let me just sew for a while. i must say working on my colour wheel block for gypsy wife focused me in a way that really calmed me down. my faith is always the thing that gets me through stressful situations or intense time periods, but the meditative act of piecing and sewing is an additional way for me to cope. in fact, i am often able to think over what's troubling me or about how my faith applies to my situation while i'm sewing. as long as i don't let the sewing take over my time or muddle my priorities, it can be very helpful.

i got everything done to the point where the block is ready for assembly. it's pretty bold and loud, but i like it. i think the soft floral will give the crazy colors enough buffer room in the top.

two almost-assembled blocks might not seem like much sewing for one week, but it's certainly a lot more than i expected to get done considering all we had scheduled. we have an equally busy week ahead of us. i'm curious to see if i'm able to fit any more sewing in. 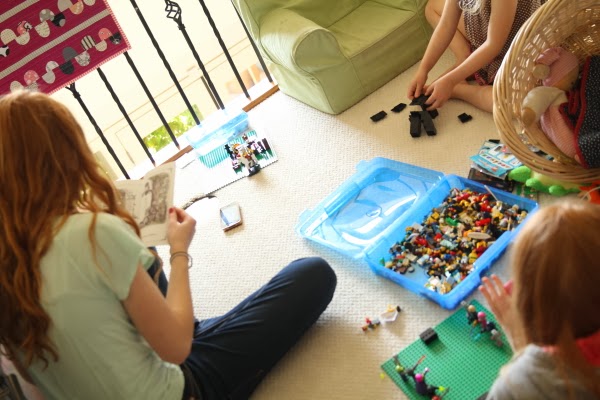 we've worked the kids hard this week, getting them involved in all the cleaning and cooking, but we gave them some good down time, too. the latest creative craze for my girls has been producing their own lego mini figure movies. they set up the individual scenes for each frame shot to tell a short story in about 60 seconds. of course the creation part takes a lot longer than the final product but it is keeping them engrossed and entertained. i love when they become so involved in a project that stretches their imaginations and minds.
Posted by hydeeannsews at 12:07 PM