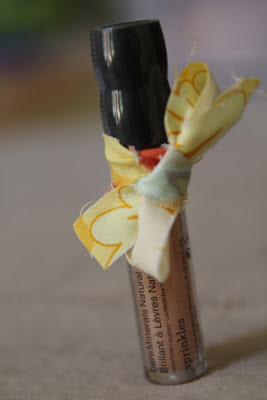 i was taking a quick no-calorie, summery gift (sparkly lip gloss!) to a friend while visiting teaching her this morning and decided to spruce it up with some sewing scraps. that little bow out of a bit of a fabric string made a nice touch that seemed to say, "i took a moment to make this a bit more special for you" rather than just delivering it undressed. if she was a sewer, of course i would have taken her some lollies. while the cat was away, the mice . . . baked. my oldest son is an adept in the kitchen and will whip up treats, with his own modifications, on a whim. his cousin was here and i can now tell my sister they didn't play the wii all day long, but did something constructive, too. miette, by the way has the most divine chocolate cake recipe ever. son said he adapted it to make it bake more quickly but did not elaborate how. oh, yes, and was out of some ingredient or other. but they were still yummy. 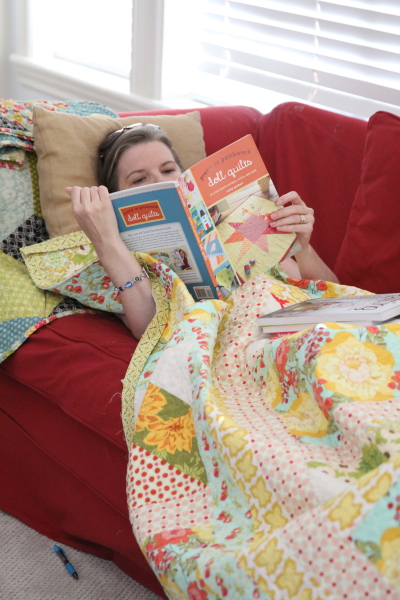 my wrist was hurting a tad this morning and the mr., who knows these things, said, yes, you can give yourself carpal tunnel or at least damage yourself in a week's time, so i laid off the sewing for the day. (maybe tonight?) i still got some quilt time in by curling up under the almost finished "romance in the garden" (binding sewn on one side, just needs tacking down!) with some new quilt books.

then i napped.
so the staycation is still being enjoyed.

and to be honest, i think it might be the computer, not so much the sewing that's got me achy. i need to work on my posturing all the way around at both these activities.

linking in to really random thursday at live a colorful life.
Posted by hydeeannsews at 10:30 AM

Email ThisBlogThis!Share to TwitterShare to FacebookShare to Pinterest
Labels: gift, in use, quilts