like all nightmares, it started out as a very simple idea that should have come together quickly and been done soon. however, i decided to put my thoughts and own special ideas into the mix and now i'm living a quilt project nightmare. 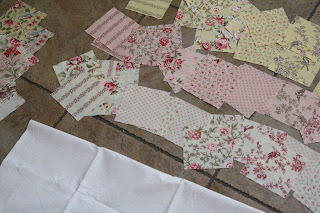 the simple idea: two charm packs of french general's pom pom de paris and some all-most solid neutral sashing made up in elizabeth hartman's modern charm squares baby quilt pattern. really, it should have been quilted and bound by now. but i had to start thinking.

initially, i spent about 2 hours arranging the squares somewhat randomly into the rows and piecing the rows together. it was a satisfying first round of work. the next time i sat down with this project, i cut the sashings and began attaching it all together. i had a silly moment of panic thinking i didn't have enough sashing fabric until i remembered that the fabric was folded in half for cutting and the pieces were twice as long as i was thinking they were. oh, for crying out loud! i even had one extra 5" wide strip leftover when it was all cut.

about half way through assembling the top, i thought (and this is where it all begins to go wrong), "this is such a straight forward design. why don't i mix it up a little? you know, be cool and modern a bit even though this is totally traditional french fabric? it'll be a traditional/modern collaboration!"

so i began playing with some ideas that involved varying the sashing widths and joining some of the block rows together. it started to look something like this: 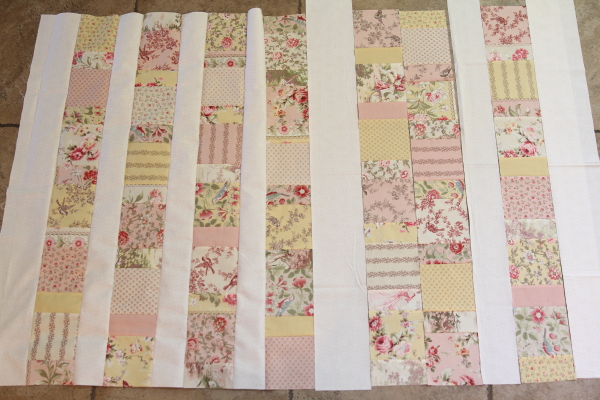 the problem with this was it wasn't mixed up enough. it almost looked like a mistake rather than some asymmetrical mix-up. i should have stopped right here and unpicked after the second or third skinny sashing and i probably would have been fine. but i didn't want to unpick, so i tried to work with it as was. big mistake #2. an unpick in time saves 9, as i was to learn the hard way. 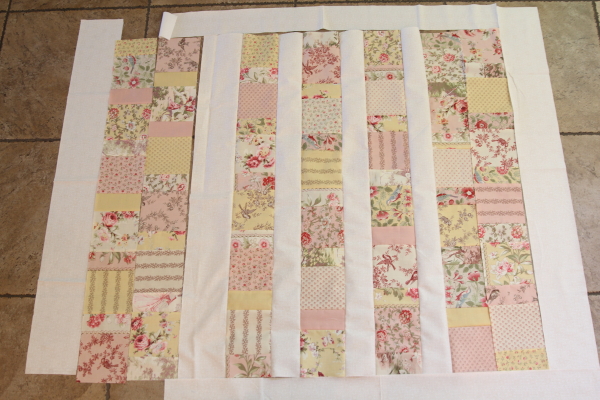 i aimed for this next idea. if i took out one more sashing, i had enough extra to add an outer border, which would widen the quilt, which was feeling a bit long and skinny to me. girls look good long and skinny. quilts do not.

i fussed and fussed with how to place the rows i still hadn't sewn on in this configuration because moving the rows out of original position was throwing off my carefully structured randomness of the square placement. i had worked hard to scatter the various prints evenly through out. i finally found an acceptable solution which involved removing one end piece and replacing it with another. 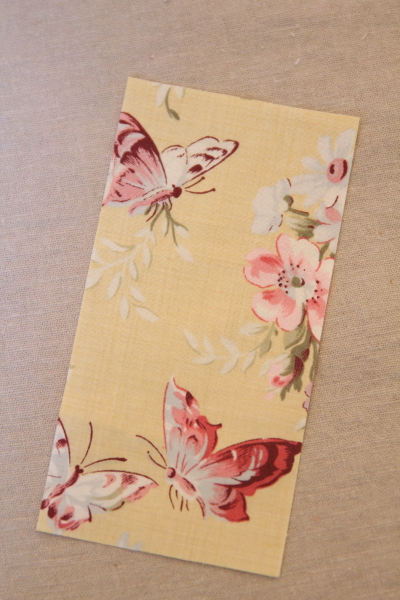 this led to my first-ever fussy cut! i wanted to feature the butterflies, not the flowers. i was feeling pretty creatively smug at this point. "oh, i'm such an innovative, real quilter! i fussy cut and solved a huge problem with my own brilliant thinking. how clever of me." pride cometh before the fall, truly. if i had only known.

when i came back for round three of sewing, by which time i should have been quilting, i saw what a huge mess i'd made. after much deliberation, i decided that i was going to have to unpick. a lot. three rows unpicked later, i am in a huger quandary than ever.

i found a 3rd charm pack, which i'd recollected might be in my stash. it would allow me to add to the rows and widen the quilt. too bad i didn't do my recollecting before i unpicked those rows. but like all my great ideas so far, it just causes more problems with the quilt. i really don't have enough sashing to widen the quilt.

to explain something: the reason i'm even considering widening the quilt anyway is that the daughter this is intended for already has a baby/crib size quilt. she doesn't need two. so i was going to make this same pattern but bigger. which i didn't remember until too late.

widening needs new sashing. so i picked a new one at the store yesterday. sure, why not? i've already unpicked a lot of it. why not just throw out that sashing i wasn't liking so much anymore anyway? 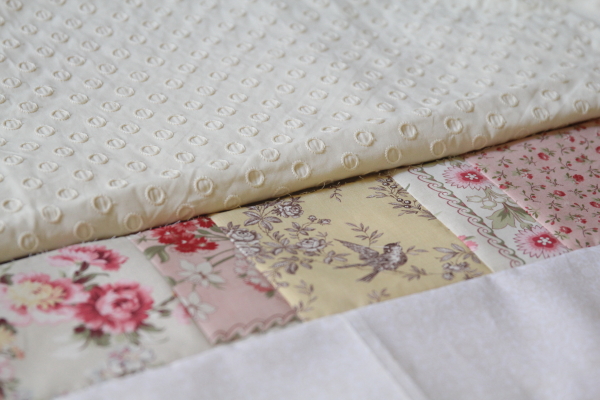 i picked the eyelet solid i'd admired on veronica's chevron quilt. i thought it would add nice texture. of course i've rethought that now that i'm home. i'm not certain the styles match. to me, the eyelet is very american and rustic and the fabric is formal and, well, french. will it work together?

i am completely stuck.
how do i move forward on something like this?
someone please wake me up!

Posted by hydeeannsews at 9:47 AM