near finish, near disaster

i spent most of my day yesterday getting set up to epp,  so actual quilting had to wait until after bedtime. i broke the rule of "no fmq after 9pm" because i really just want to finish this quilt. i can taste the end, it's so close. (tastes like strawberries and smells of daisies.)

everything went pretty well other than the usual nonsense of me forgetting simple, routine things. like putting my slider back on or not raising my thread antenna. maybe someday it will all be rote. i am pleased to report i no longer have to consult the manual to properly thread the machine or set up the bobbin. so that's progress.

i also tried using gloves. i'm undecided as to whether they are better or not.

i did make one new mistake, which makes for another lesson learned. i had to wind the bobbin shortly after starting and neglected to cut off that little tail that sticks up out of the top of the bobbin from where you thread it to start winding. big mistake. i kept getting these weird snags on the back of the quilt and what seemed like bobbin thread breakage. finally after 3 blips, i stopped to investigate. eventually i found the culprit, then was off to smooth sewing. 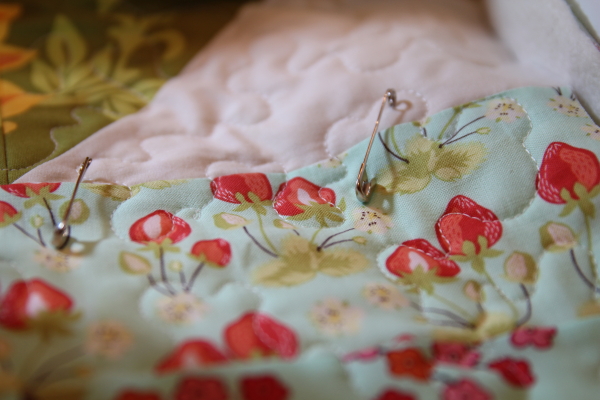 i am getting in the groove of fmq in spurts. you know how you hum along at a steady pace, just the right speed and stitch length? it's very nice. i don't like to interrupt the flow to stop for pins, so i got pretty good at maneuvering around them.

until about 1am, that is.

i took a wrong turn and swerved directly over a pin! crash, crank, horrible screech and grind! oh, my goodness, my NEW machine!!! lots of exclamation marks. 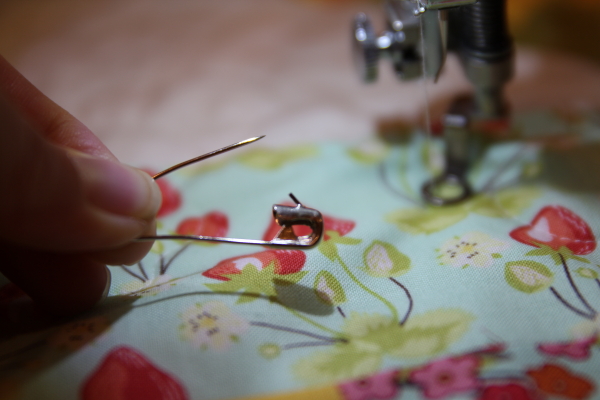 have you ever seen this? the end of the needle is embedded in the pin head. yikes! after i got my heart to restart, i began cleaning up the mess. you can bet i said a small prayer of thanks that no flying needle pieces pierced me. long story short: it took me an hour to get everything back on track. i pulled out all the screwdrivers and did open-plate surgery. for the first half hour i thought i had broken the machine because the needle wouldn't descend properly. diligence paid off, though, and i straightened everything out. thank goodness! another prayer of thanks offered. she does sound a tiny bit off to me, so i'll be sending her in for a good service after next week.

i got moving again, flinching every time i approached a pin, rather like i do whenever a bird flies near the car now ever since i hit a buzzard in may. (anyone want to hear that story and see pictures?) but after a bit i got cocky again and went around the pins that seemed a safe distance away. 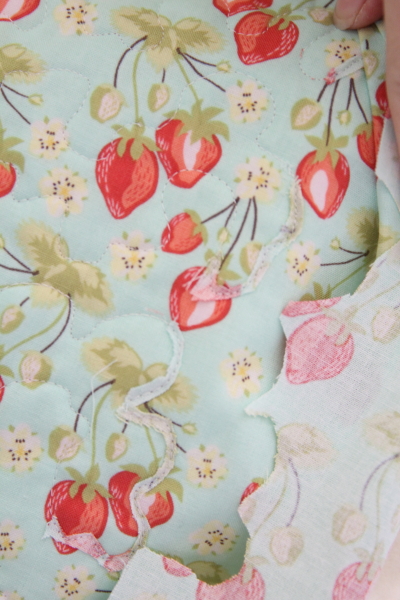 i also got a bit of the backing's edge turned under again. all the big girls say to make the backing 2" larger than the batting on all sides, but it seems to be causing this tuck problem. how do i avoid this other than paying more attention, which is really hard to do when i'm concentrating on the flow of quilting? instead of unpicking and requilting these sections i just clipped closely around the spots. now i have a bit of applique detail on the back. just kidding. i'll tease the bits out later. mostly i'm miffed that i've cut into what will become strip scraps when the quilt is squared up and the excess backing comes off.
i finished up the fmq  around 2:15am. sweet! good thing the kids let me sleep in until about 8:30. i still have a bit of a quilting hangover, but i'm surviving. (have i coined a phrase here, "quilting hangover", or did someone else state the obvious first? i would like to make at least one contribution to the larger quilting community. that may be it.)

with all my pins free, i think i'm ready to baste up "taite" and get her quilted!
that's been 2 years in coming.

i have also finished unpicking "pom pom de paris"!
linking in with crazy mom quilts for friday finishes. i know, it's a cheat, but it was a good story. and the giveaway ends today so i needed to get the word out.

Posted by hydeeannsews at 11:46 AM