did your morning start out with a crib covered in baby poo? well, mine did. but no worries. it got better fast.

while the baby was in the tub, i was thinking about all my "before i quilted" quilts and trying to mentally locate one that had eluded me. i found it buried in the linen closet after the bath. 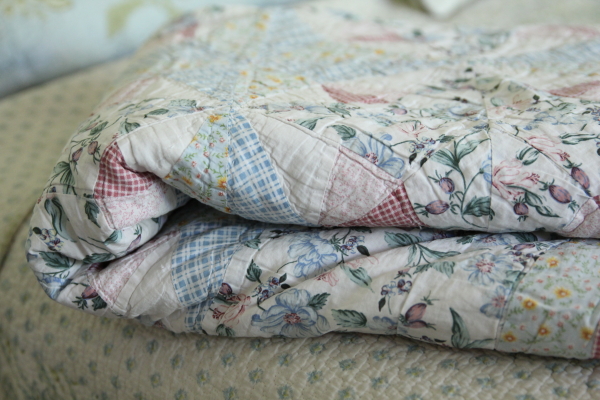 but more about it later.

while i was photographing the old quilt, i decided i might as well photograph my grandma's sewing machine, too. i've been meaning to do that forever.

when my paternal grandparents reached their 80's about 10 years ago, their health was failing and a decision was made to move them closer to the children so they could be cared for. their 4 children descended on their home of 30 years in houston, tx, and cleaned it out. there were a few things i wanted and got, the main one being a painting of my grandfather's mother. 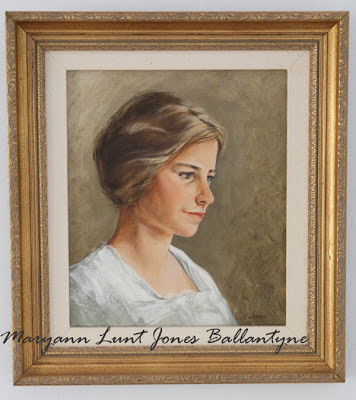 maryann died when my grandfather was only 5 months old, so none of us ever really knew her. but i've always loved this painting and been drawn to it, even before i knew who the pretty lady in it was. i like to imagine she was a quilter. i do know for certain she was a musician and accomplished pianist. my husband thinks i look like her and i tend to agree there is an element of sameness there. my father brought me the painting and her wedding band after the move. priceless, both of them.

something i did not ask for that he so kindly brought me was my grandmother's sewing machine.
like i mentioned before, my grandma margaret did the obligatory 50's housewife sewing, but i never saw her use the machine in my lifetime. it sat in front of the window in her galley-style laundry room, untouched. when daddy brought it to me, it was locked up in it's pretty wooden case. i thought it was nice of him, but i secretly wished he'd gotten his grandmother's old black treadle singer, still in it's table. i remembered grandma's machine being white and boxy, and knew it probably came out of the 50's or 60's. it wasn't a graceful antique, but a retro machine is pretty cool.

he also brought me two books from her extensive collection: a circa 1950's sewing manual and a biography of my great-great uncle, maryann's uncle lehi. 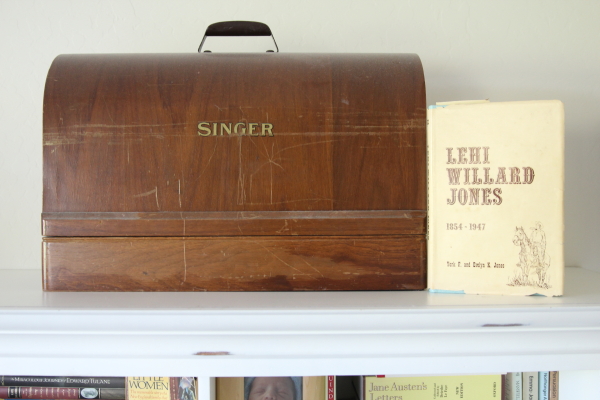 i didn't sew at the time these were handed down to me and thought daddy's offerings rather unusual, but graciously and thankfully accepted them since i like family heirlooms. i suppose you could say they were prescient of my coming hobby and obsession. the machine now resides on a bookcase in my bedroom. this morning i had an urge to open it up and inspect it's mid-century white glory.

but the key was missing.

i hunted high and low for that darn key. i also tried a tapestry needle, bobby pin, safety pin, and any other small keys i could find. no luck. i don't know what kept me looking, but for over half an hour i did. and finally, in the last place of all, i found it. (well of course it's the last place - once you find something you don't look anywhere else.) 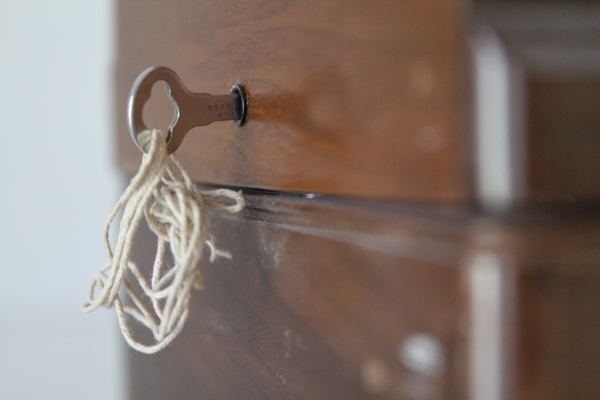 i thought i had looked at the machine when daddy brought it to me. but i guess i didn't, because when i opened it up today, i nearly cried. look! 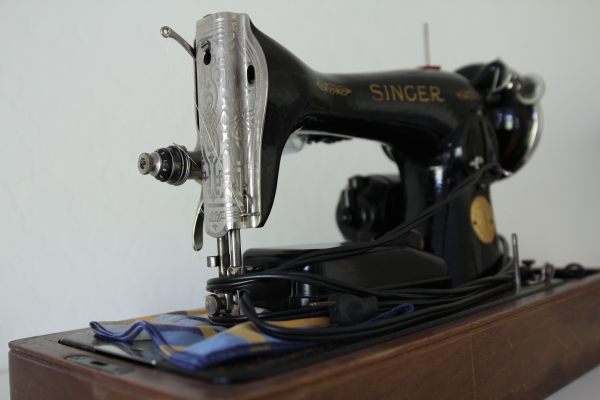 it's not her old industrial-looking white machine, but this beauty! i was stopped in my tracks, speechless over her loveliness. i have no idea where this came from, other than from grandma margaret's house. i know for a fact aunt catherine got the other antique machine, so i don't know what this one is, exactly. but, oh, thank you, thank you, daddy for being intuitive and thoughtful enough to bring it to me. 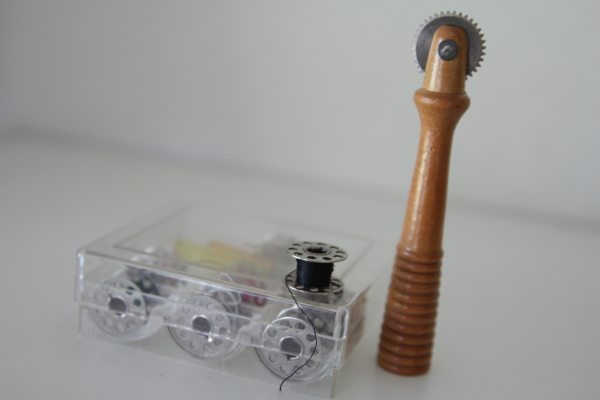 there were even some notions in it - bobbins still threaded and this wood-handled marking tool, also beautiful. we just don't make stuff like this anymore. everything is made with attention to detail and aesthetics, as well. the machine's front plate is stunning. i took two photos of it in different exposures. can't decide which i like better. 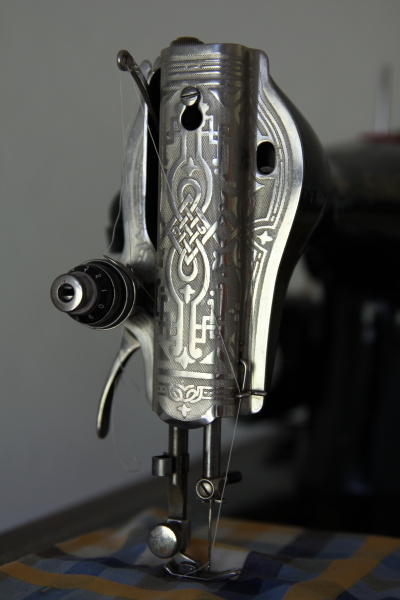 darker shows the details of the etching (?) more distinctly. 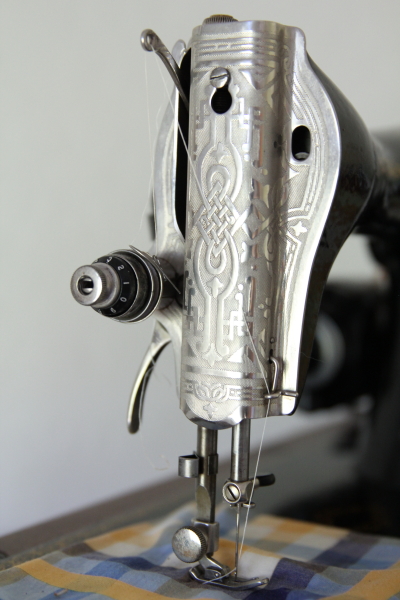 lighter shows off the gleam and shine.

can you even believe how glorious? i'm completely in awe still. 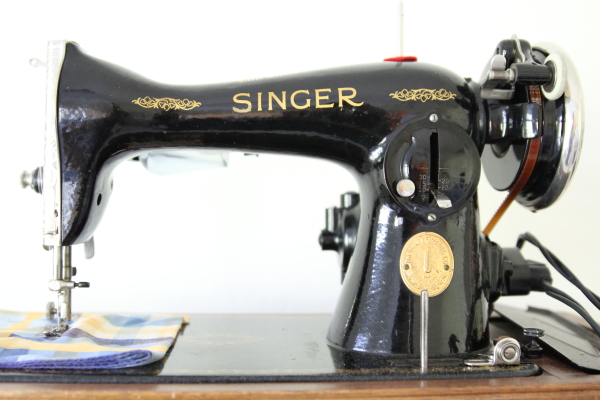 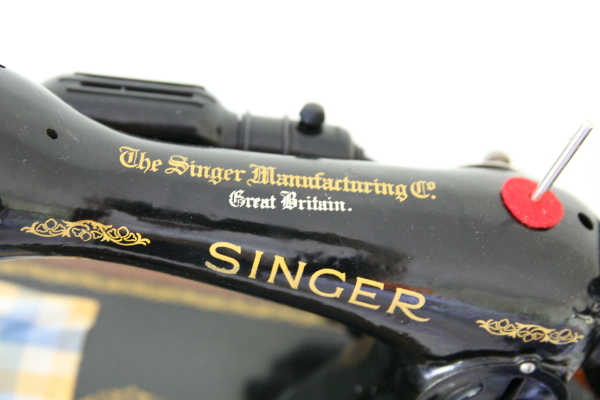 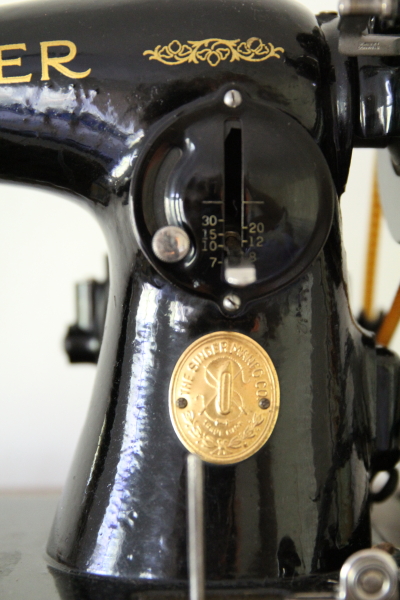 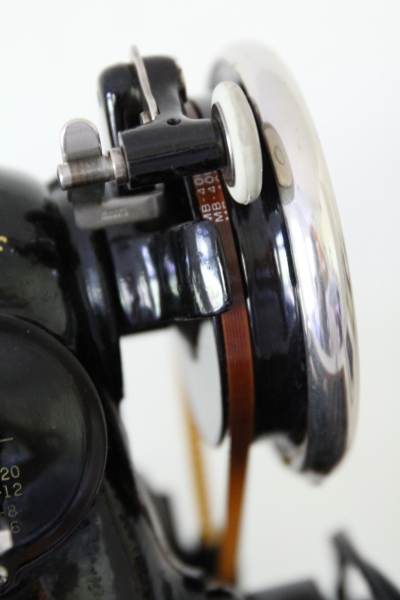 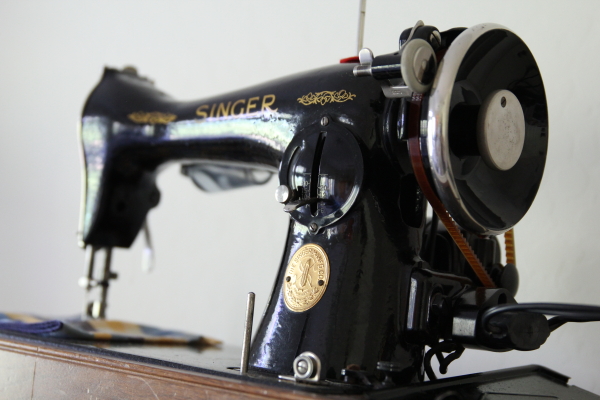 i wonder if she still works, but i'm rather afraid to try.
however, i will be uncovering her to admire more often.
this rather makes up for not having any family quilts.

as for the retro sewing manual, it's gone into hiding. i searched pretty far for that one, too, but gave up. it'll turn up later and make for another nice post some other time.

do you have any heirloom sewing machines, notions, or products? i'd love to see or hear about them.
Posted by hydeeannsews at 10:44 AM