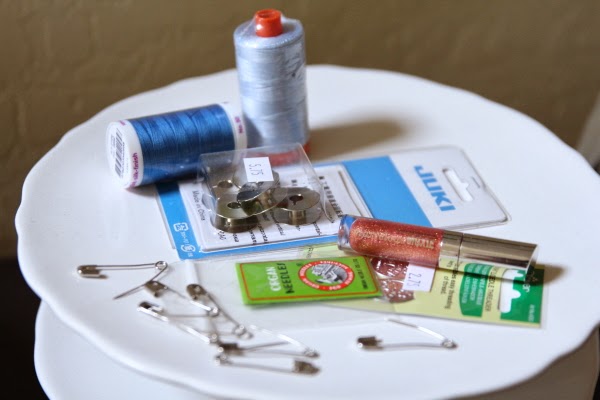 this little still life accumulated all on it's own in my sewing area. something about the colors and everyday objects makes me smile. it tells a bit of a story, doesn't it? there are some recent notion and thread purchases, removed basting pins set down when i couldn't find the jar, and a tube of my favorite lip gloss, all hurriedly set down in passing on separate occasions. i like to keep clutter to a minimum in the sewing/dining area, but bits and bobs do tend to collect periodically. 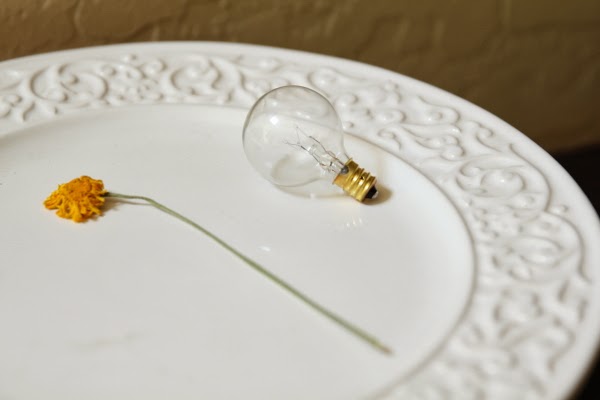 this is another little gathering that happened, which is not as pretty, but tells two stories.

the flower was presented to me by my son, s2, after he and his dad took a bike ride last weekend. "oh, mom! we picked you a flower." the mr pulls something out of his rear pocket (really). "uh, well, it looked a lot better before dad sat on it!" it was sweet and very funny.

the lightbulb was a replacement bulb for my bistro lights in the courtyard. it came in a two pack, which the baby discovered. she somehow managed to open the packaging and get both bulbs out. then she gleefully clinked them together. her brother saw what she was doing and tried to stop her, but didn't make it to her in time. he was able to catch her hands after she had smashed the delicate glass of the first bulb. i ran to answer his yells for help and was able to further immobilize her hands as she was trying to pick up the shiny pieces of glass, but we couldn't hold her and get the end of the bulb out of her hand, too. dad had to join the effort. it took all three of us to remove the bulb end from her hand and get her out of the area unharmed. then she burst into sobs because she didn't understand why we'd ruined her fun and were frantically yelling to "let go!" since she wasn't hurt, it was rather comical, too. in the end. the unbroken bulb was hastily set down on the cakestand while i cleaned up the shards.

so what's laying around your sewing area and what story does it tell?
Posted by hydeeannsews at 10:11 AM

Email ThisBlogThis!Share to TwitterShare to FacebookShare to Pinterest
Labels: my spot