oh, joy - a new year! i love fresh starts and reasons to begin again in the hopes of doing better. the new year always seems like the biggest fresh start of them all. as i get ready to head into the new year, i'm going to take one last look at the past year to see where i started, what i learned, what i did.

really, 2013 feels like the year i became a quilter. technically, i started quilting in late 2010, nearly 3 years ago. but that only lasted for about 6 months before quilting was so wonderfully interrupted by my seventh baby. not only did quilting come to a screeching halt whilst i was pregnant with her, i did not get back to it until she was nearly a year old. that was late last year. yes, she was quite the interruption. 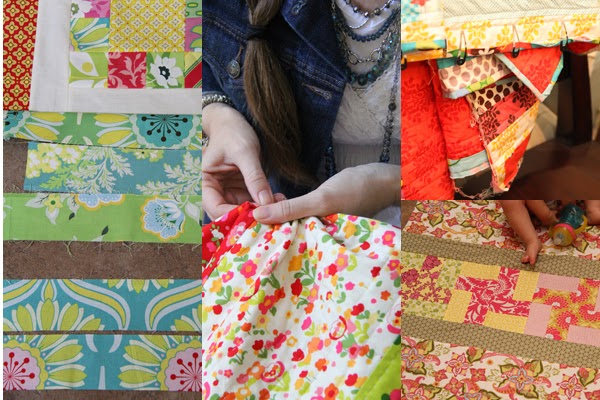 so at the beginning of this year, i had three major wips left from my pre-baby days, another one i'd acquired at the end of 2012, a whole slew of patterns and fabrics i'd already purchased (before i really knew what i was doing), a lonely little blog that was limping along, and a burning desire to get quilting again.

i was spending time working on "taite" at the machine and handquilting "expecting blossoms" when i could. i had "out on a limb" quilted but needing binding, and "twirly" started from a single-day class in december, that were not getting touched at all. to add to that, i signed up for a single-day class, in february, which began "romance in the garden." i was definitely having project ADD and not producing any actual finishes, but just so happy to be doing something with all my fabric again. 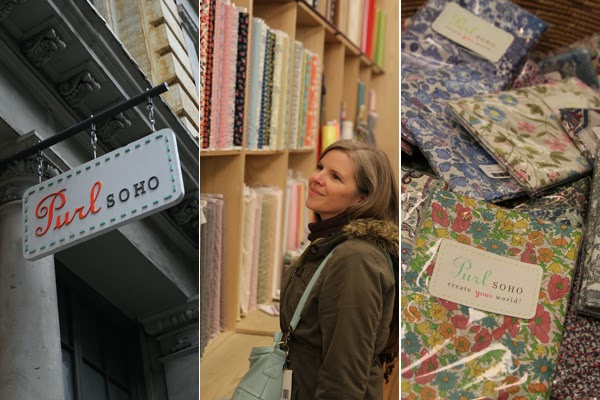 in march, the mr and i took a trip to new york city, where i got an unexpected chance to visit purl soho in person rather than just on-line. while there i picked up my first bits of liberty (but was too clueless to realize what it was) and shocked my mr with just how much you could spend on fabric that fit in a small shopping bag. (that was a really good post but before anyone besides my non-sewing friends actually read this blog. someone go read it and make me happy, please!) 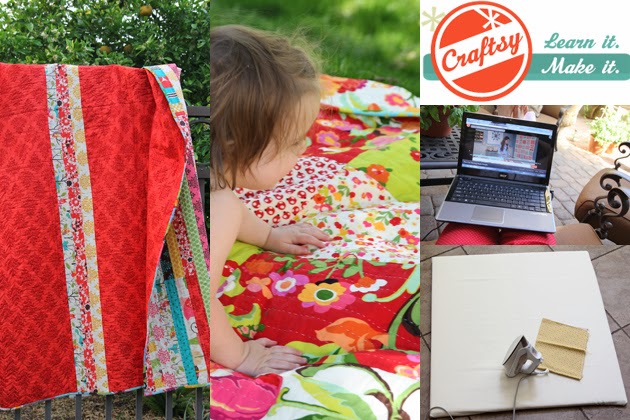 the next few months of spring brought two actual, long-awaited finishes: "out on a limb" and "expecting blossoms."

i also discovered craftsy.com and signed up for a few classes. i have yet to make anything from the classes, but i do love watching them. actually, i take that back. i've made the diy pressing board and design wall from elizabeth hartman's class. 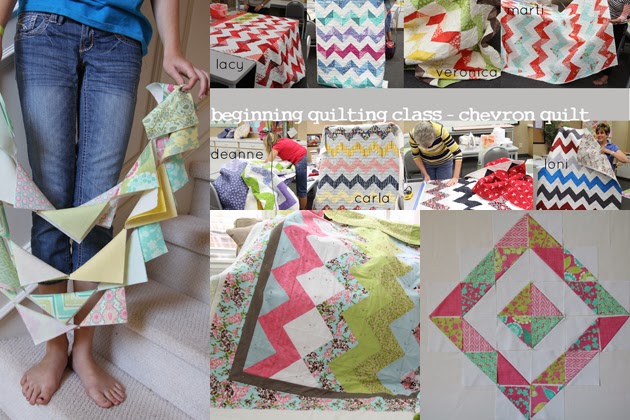 at this point i was making a lot of new things, but still feeling like a beginner. my accuracy and confidence were not that great. so it was a complete shock to me when i attempted hst's and found i could do them. yet another beginner's class pushed me out of my comfort zone and into hst land. i learned two different methods for making an hst, both of which i made into tutorials. my infatuation with the hst was such that not only did i start the quilt for the class, "plus a diamond," but i also began to play with my own quilt design. 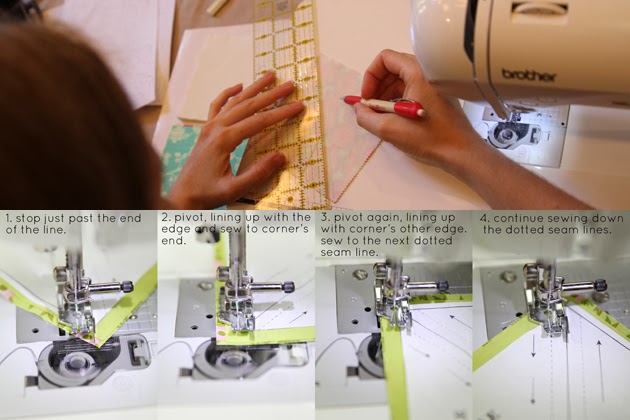 tutorials for "traingles on a roll" or easy individual hsts are both available. 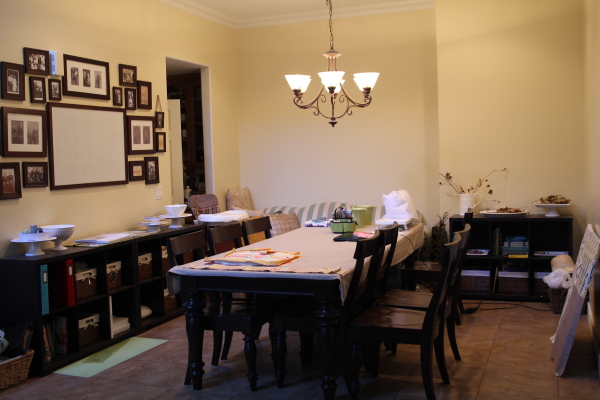 by may, i was no longer sewing in my bawthroom space but had migrated downstairs to my "formal" dining area (that's a loose term for a work in progress!) so that i could sew more often and in the middle of the family rather than tucked away in a corner by myself upstairs. sewing in a more public space required attempts at disguising my space.

at this point, two major leaps forward came to my sewing: i began joining link parties with my blog and i learned how to stipple fmq. becoming connected to the blogging world added a whole new dimension to my sewing experience and really pushed me to do more, go farther. linky parties also introduced me to some very sweet quilting friends, from all corners of the world. 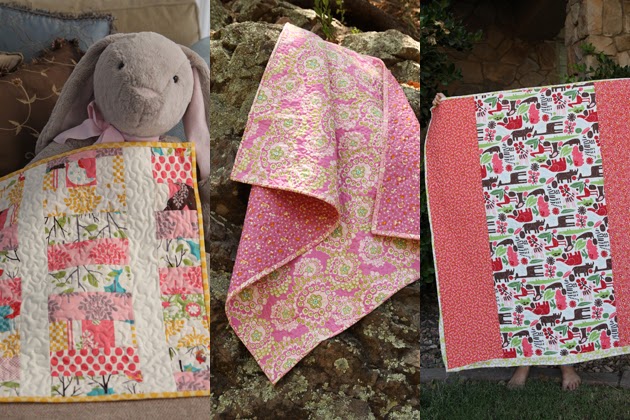 i learned to stipple bit by bit, starting with a little doll quilt i'd pieced from scraps. then i moved on to two baby quilts for gifts, the not-a-quilt quilt (inspired by liz) and a simple 3-panel quilt of my design. this helped me work up my courage to stipple quilt "taite", something i'd been needing to do for about 2 years. 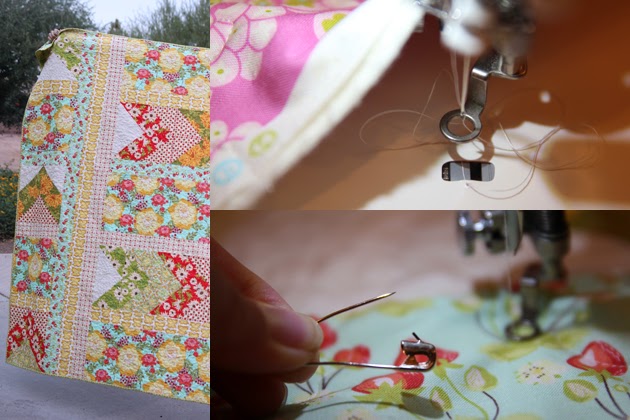 but first i went ahead and practiced on "romance in the garden", which was now ready for quilting. along with gaining new skills, i was having plenty of "home ec" moments that were teaching me all the things i didn't know, or that hadn't yet sunk in, about sewing and quilting. the worst was when i nearly broke my machine when i ran into a basting pin. 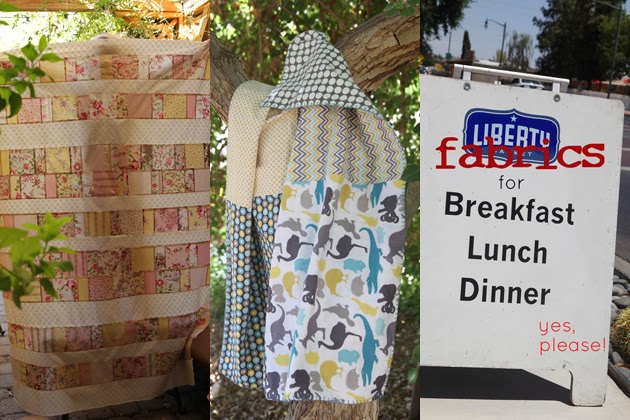 most all of this explosion of productivity happened on my two-week summer "staycation" where my kids were off to a music theater day camp and i was sewing my heart out. not only did i get all those little quilts started and "romance" finished, i also made another flimsy, a real paris nightmare that eventually became "paris daydreams", i made my 18th and final 4sq blanket, and did a liberty giveaway in honor of my angelic friend, lucy (yay, laura!). 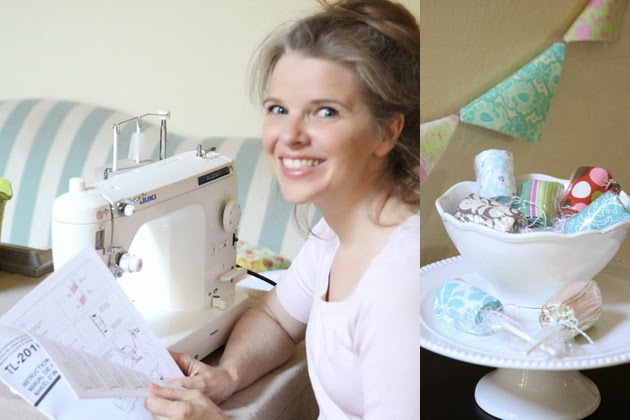 i guess this is the time to mention i got a new machine! when i began fmq, i knew my sweet little brother project runway was not going to cut it anymore for quilting. in honor of my 40th birthday, i talked the mr into getting me a new juki tl2010q. to celebrate and spread the love, i did a few related giveaways on my blog (yay, deborah!) and shared a tutorial for making fat quarter lollies (which later got picked up by favequilts.com and featured on the cover of an ebook). 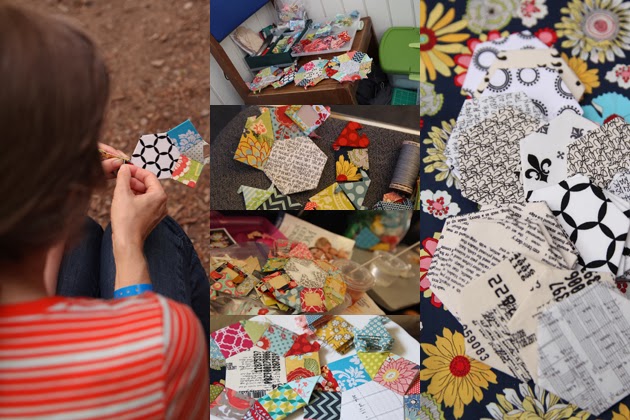 the rest of my summer was dominated by our 6 week family road trip through the western united states and the introduction of portable english paper piecing (epp) to my sewing repertoire. my epp also followed me to san diego, on a back packing trip to yosemite natl park, and to the east coast in the fall. where i go, it goes. i've enjoyed epp so much that i've started a monthly link party, "in hand", in the hopes of bring other eppers  and their projects out into the light. 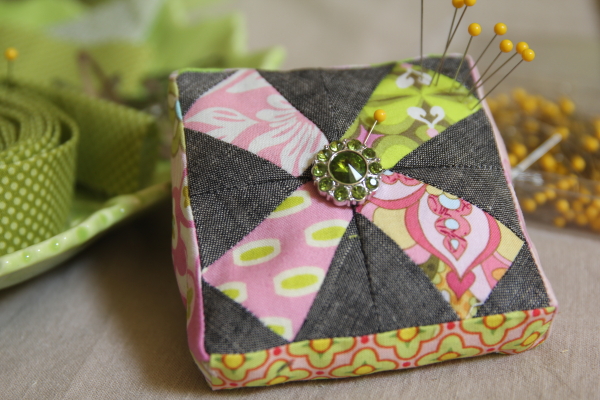 one other new technique i attempted was foundation paper piecing. i made a cute little pincushion, something i'd long been in need of, as my first dip into the book patchwork, please! i'm willing to try this more . . . once i get everything else that's in progress done and out of the way. 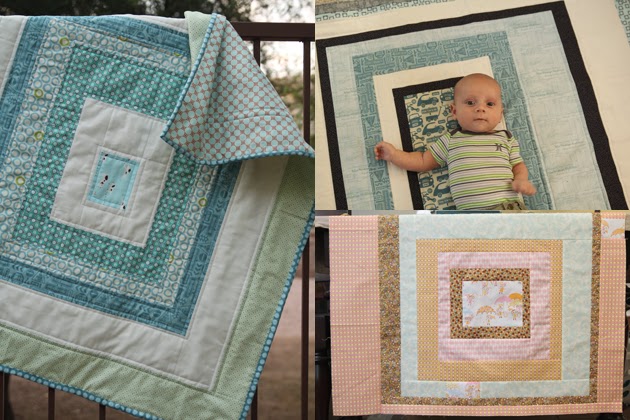 in the fall, my family hit a baby boom, so i began dabbling in improv-pieced frame quilts. i completed two boy quilts, "patch the puppy" and "go, baby,go", with one lone girl quilt, "rain or shine", nearly done before christmas plans interrupted everything. the idea for Christmas was to complete the 4 wips i had going for the girls and actually make 2 new quilts for the boys (and a sham for the 5th daughter, too). 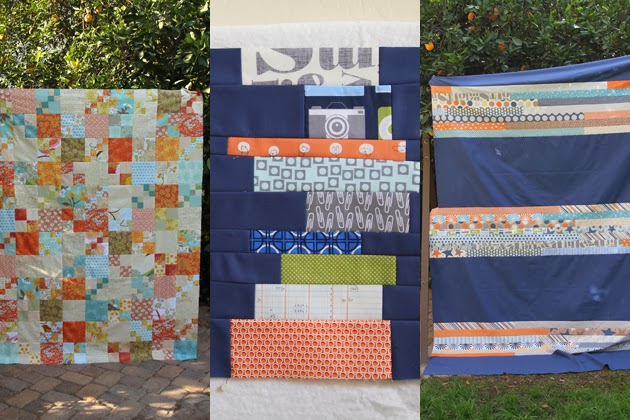 that got interrupted, too, by my obsession with the penny patch quilt along at stitched in color. there is a trend of interruptions going on here. so maybe my quilting road is full of stops, starts, and detours, but it has been a journey of learning, experimenting, creating, regardless of how immediately productive it's been. ***is anyone still with me?! whew! this is taking forever. it was a lot bigger year and a lot longer post than i realized.*** 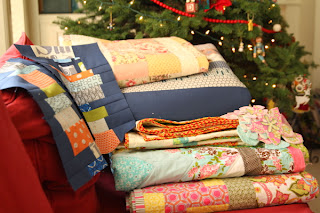 a mid-season reality check pulled me out of the christmas making madness and back into my family. the quilts got mostly done and gifted as they were. i have their completions to look forward to in the coming year. there were also the children's adorable makes, a few other significant events in my quilting life and on this blog, but i'm just too pooped to go into them. my review turned into rewriting this blog. here's the short list of my sewing life this 2013 year:

now, it's time to look forward to the new year, the fresh start, the new beginning. 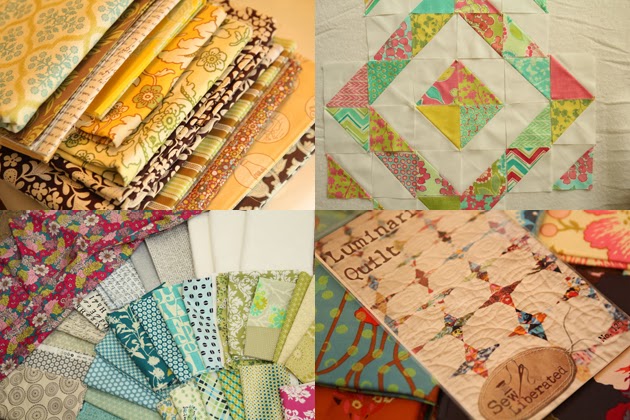 i have these makes in the que and some fabric fasting to do as my goals for the upcoming 2014 year. i also purchased rachel hauser's ebook versions of her classes handstitched and sewing curves to use as guides through more skill building. oh, there's lots of goodies in there! i'm going to face forward now, with high hopes that 2014 brings:
now, if you'll excuse me, i think i'll go sew something!
a very happy new year to you all, each and every one.

linking in with sarah and anne's year in review party
Posted by hydeeannsews at 4:06 PM

Email ThisBlogThis!Share to TwitterShare to FacebookShare to Pinterest
Labels: completed