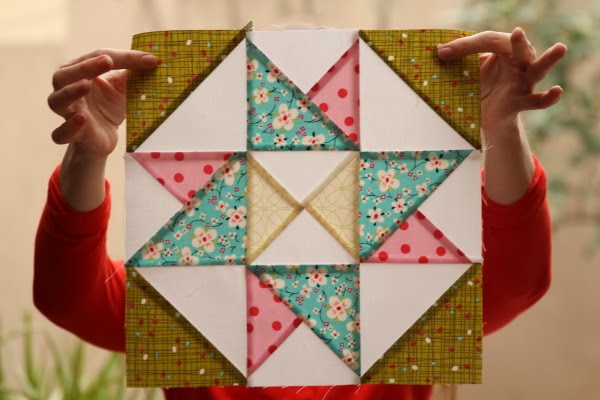 finished just in time for the next block to arrive in my inbox tomorrow morning, i have completed "intentions," my first block for the sugar block club 2014 bom series from amy at stitchery dickory dock.

being part of a bom series and making this block was a new experience for me in many ways. i've never done a traditional block before, mainly because they have been too complicated for my skill set. both the hourglass mini block and the 3-triangle mini blocks (official name?) were new to me. i surprised myself by working well with so many triangles. 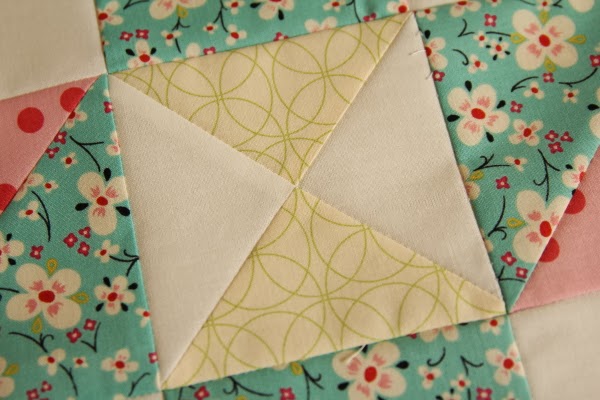 because there is a low time commitment with only one block each month and because there are so many pieces/chances to throw off the size to each block, i focused on precision more than i normally do with this block. there were a few redo's for me, but not too many. in general i shocked myself with some pretty precise piecing. not perfect, mind you, but definitely personal progress.

i've never purposefully made blocks over-sized and then trimmed down, but i gave it a go this time and was converted. i did find one block that i either had to trim slightly off center or remake, and i let that go (notice the way the pink and blue point is slightly off in the upper left of the photo). however, when trimming up the mini blocks to assemble the larger one, i accidentally trimmed one 1/4" too small. arg. but i just whipped up another one.

also, when my hourglass block was a tad too small, even after repeat pressing, i just made another one (which is still slightly imperfect if you look at the bottom points). so i have a few spare parts now, but this doesn't bother me a bit. they'll just get worked into my backing when the time comes.

with this series, each block is a surprise each month. i was a tiny uncomfortable with this at first because i wanted to know where the series was going when i made fabric selections. i wanted a color palette to start with but didn't know how many different fabrics might be required. however, i got over that and gave into the fun of working with continual surprises. despite wanting to break into my liberty fabrics, i knew they were too precious for a skill-building experience. instead, i picked over my stash to find some prints that have a sort of farmhouse and playful vintage feel to them. but i'm obviously also working in some modern prints with that comma circles print. i'm just going to take it month by month with the decision making. 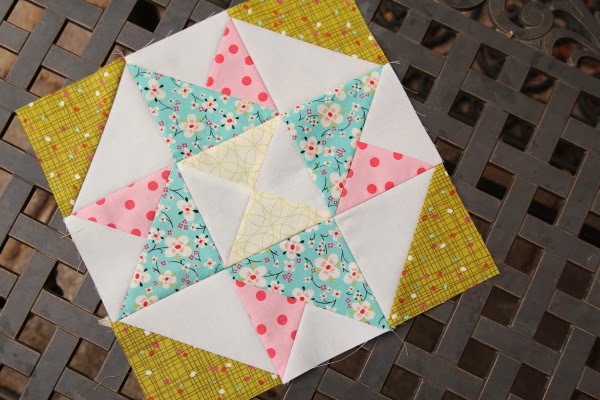 all in all, this was a fun little project; a great exercise in skill building and comfort-zone busting. i look forward to the February block tomorrow.
Posted by hydeeannsews at 2:30 PM