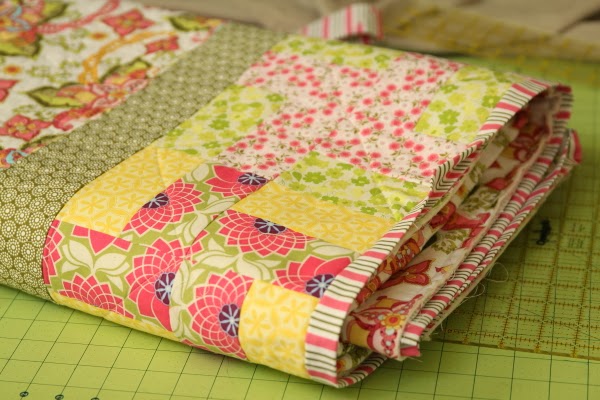 "twirly" is at the 95% finished stage: binding is machine sewn to the top, needs to be handstitched to the back. it's now completed enough to gift for Christmas and has moved to the handbinding que, which is behind the top completed/quilted que. i am quite pleased to report that i got the binding put together and fully on the quilt without having to consult one single tutorial or photo anywhere.

i get binding now! i know how to do it all by my big self, i can actually visualize how and why it works the way it does. this is a big step forward for me as a quilter. it was a tiny bit tight after i attached the tails, but i got it to sew on the top with no problems or weird puckering, so it's a success.

i did take an extra-long time, going super slow, to see if i could get the seam allowance more exact, thus making for perfectly balanced binding. it was tedious. we'll see if it was worthwhile or not when i do the handstitching. 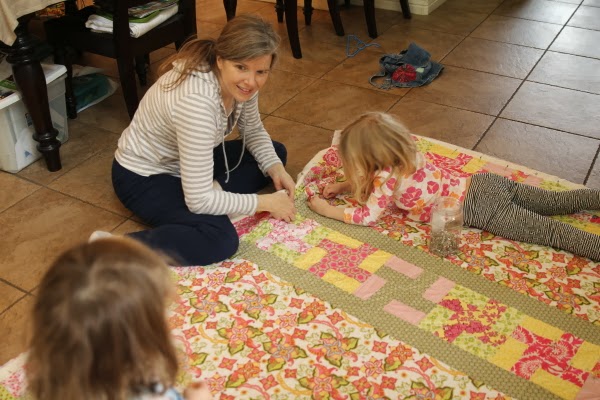 in the interest of moving my Christmas makes along, yesterday i decided to forgo exercise, personal grooming, or a change of clothing in order that i might give all my attention to getting this thing done! sometimes sacrifices are made in the name of the greater quilting good. (today, however, i gave my children a slightly better example of motherhood by showering and dressing myself.)

i owe big thanks to my quilting crew for the large group, concerted effort to get this quilt completed. my number one pin remover did a great job depinning for me. littlest sister did her part by running around on the quilt, stealing everything she could get her grubby little hands on, and bringing over a ruler to take measurements for her own personal entertainment. (liz, princess would have died to see all 3 of us actually on the quilt at the same time!) 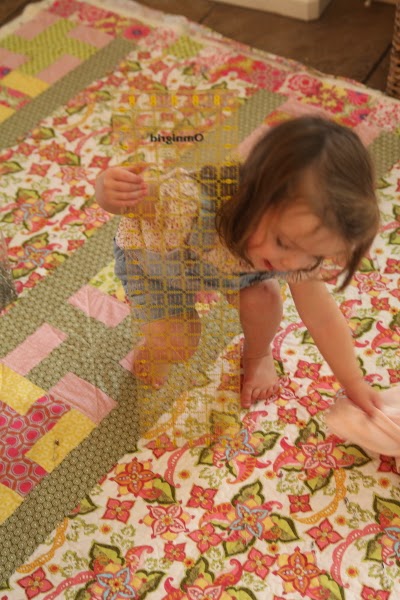 these are her go-to tools. and they are definitely hers if you judge by the way she screeches, "mine!MINE!!!" and sprints whenever she finds them. 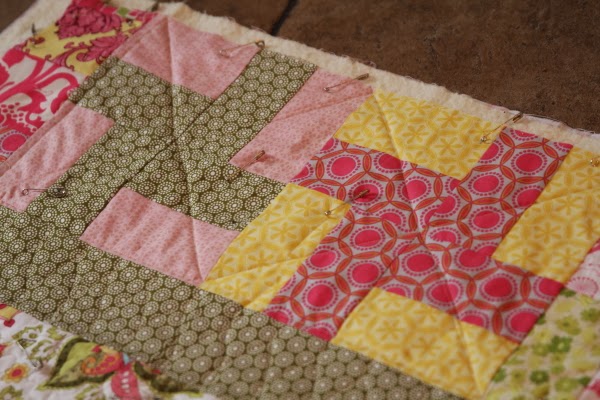 the final quilting of the straight lines with the fmq foot went badly. very badly, indeed. but it's done and i've moved on. i'm hoping that when the creases from the hera marker disappear, and you can no longer see where the stitching was supposed to be as opposed to where it ended up, it won't look so poor. but that will only help a little, i'm afraid.

my only other concern: d3, who this is intended for, said yesterday she has decided she wants "her" quilt to have animals all over it. she doesn't seem too interested in this quilt. i hope it's not a huge disappointment when she opens up her gift and finds "twirly" inside.

on the funny side, d4 was trying to figure out who this was for when we were working on pins. she asked if it was hers (at least someone is interested!). nope.

"second oldest sister?" nope.
she was hot on the trail and i was preparing to evade the next question without directly lying to her when she asked (or maybe i said, can't remember exactly)

laughing hard, she replied, "but mom! this is a girl color quilt. why did you pick girl colors for a boy?" oh. i thought he liked pink. doesn't he like pink?

"no, he likes purple." i guess i made a mistake. do you think he'll like it?

she had a lot of fun telling everyone all day that the pink quilt was for oldest brother, that silly mom thought he liked pink. i can only hope d3, whose name i have quilted into the stippling, decides she likes a quilt that twirls like she does. even without animals or her favorite color: purple. in my defense, i started this quilt with her in mind last December before her color preference was so decidedly fixed. i hope what her younger sister d4 said, that d3 hates pink, isn't true! it'll need a Christmas miracle otherwise.

d1 - "plus a diamond" needs handbinding

penny patch qal - top completed; a flimsy
linking in to the making Christmas blog hop and link party hosted by lucy at charm about you this 8th week.
﻿
Posted by hydeeannsews at 10:30 AM