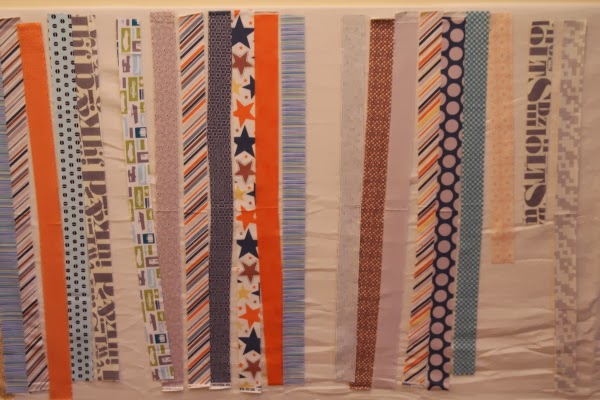 i've finally begun my first of two boy quilts for my sons. last year, i bought a jelly roll of "superstar" by riley blake with the intention of working up a simple grouped-strips-and-open-space-panels quilt. i made a pattern that i called "bandwidth" - i think the name originated from a garbled idea of those bars that dance up and down on the stereo when music's playing and radio bandwidths. this time last year, i really liked this idea. i wanted an easy, quick pattern i could knock out for the boy. 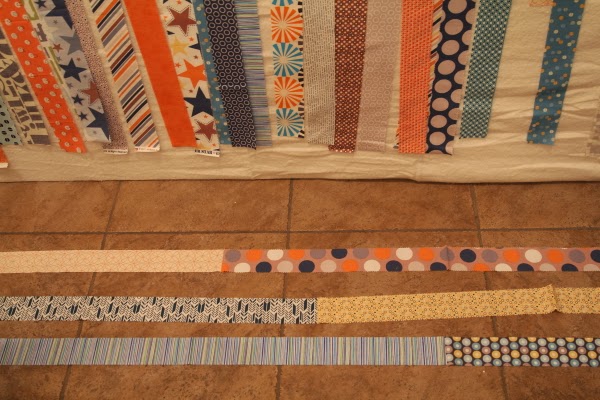 but this time this year, i wanted more than just the one fabric line and also didn't like so much my picks for the wide open spaces. i bought some different solids to audition for the panels and picked out some coordinating prints to compliment the jelly roll, which i culled.

i cut all the strips yesterday and began piecing them together. (it was night time when i was working, sorry for the lousy photos.) it's coming along quickly, but i'm not at all sure about how this is going to look. i think i have a train wreck going here. even with the addition of the new fabrics, i am mostly likely making one big pile of "that's really ugly but my mama made it, so i love it anyway." i just don't know, friends! 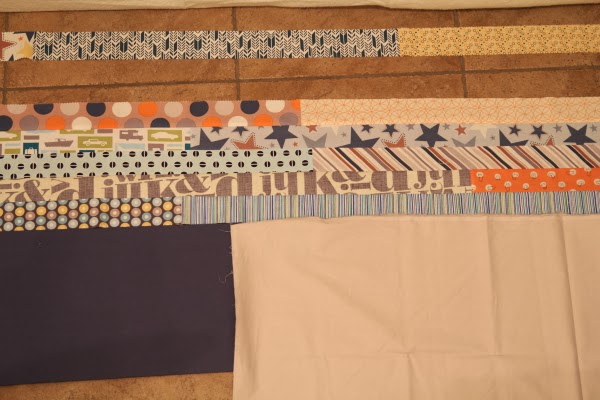 this is the first section of strips completed. i'm thinking of using either the flat navy blue or the stone grey for the panels. maybe. i'm so totally undecided.

and at this point, two weeks away from Christmas and with 2 flimsy and 2 USO's (un started objects) on my plate, i'm just in need of a quilt! what on earth do i do? press forward, with my eyes closed and fingers crossed. if he really doesn't like it, and i'll know by how much he uses it, i'll get him another one made in the next year or so. i'll likely make him another one before all is said and done anyway.

wish me luck!
Posted by hydeeannsews at 9:50 PM