spray basting - not a fan 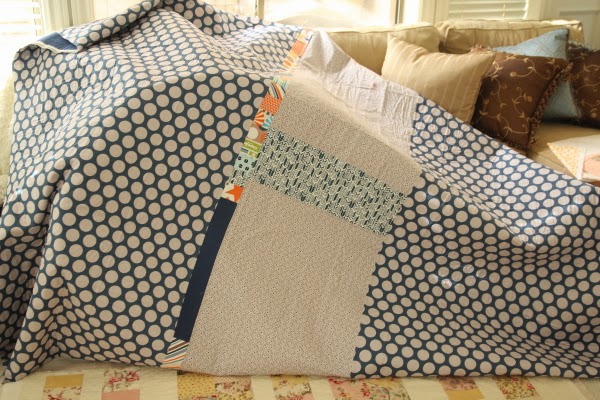 yesterday i pieced two quilt backs: "paris daydreams" and "bandwidth."  i found out why my girls had such a hard time holding the flimsy up for the photograph - this fella is huge! i wanted it to be around 72" x 80ish", but didn't measure how the length was coming out as i added in the solid blue panels. turns out my top is more like 71" x 99"! it's long and skinny, like my son. i had to crack open a queen sized batting to accommodate the length. oh, well. we expect this son to be tall. this quilt should keep him covered for life. i had to piece the backing a lot more than expected. i used the yardage i bought for the back, another yard, and bits leftover from the front strips.  it's barely big enough, but i wasn't going any bigger. i can always trim off some of the blue panel ends if it doesn't work out when quilted. 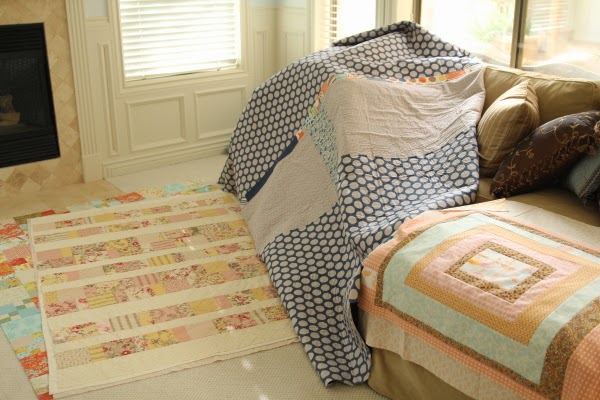 my formal living room now looks like a quilt bazar. there are two basted sandwiches and two flimsies sprawling about. the flimsies aren't even for christmas, they are on hold until i can get the christmas gifts done. ﻿
i gave spray basting a go. it seemed like the best way to get 3 or 4 quilts basted at one time so that i could gift them in a state that at least resembled a finished quilt. i don't have enough pins to do that many sandwiches at once, so it had to be spraying. since i decided on this measure so late in the season, i was unable to order any spray online. i picked up a can of (i think) thermoweb at joann craft's with a half-off coupon. but i wasn't confident it was a good brand. so while at the quilt store the other day, i asked what they recommended. 505, of course. but they didn't have any and i was told to stop by another nearby sewing store to see if they had any 505 or Sullivan's in stock. the experienced quilter who was advising me assured me Sullivan's was her favorite and that it didn't stink. Sullivan's was all they had at the other store, so it was the winner.

i had hopes of liking spray basting, but they were soon dashed. perhaps it's the brand i got. however, there are things about the entire process i just didn't like. after getting the 2 quilt sandwiches basted, i'm leery of doing any more. the large quilt, especially, was difficult to manage. 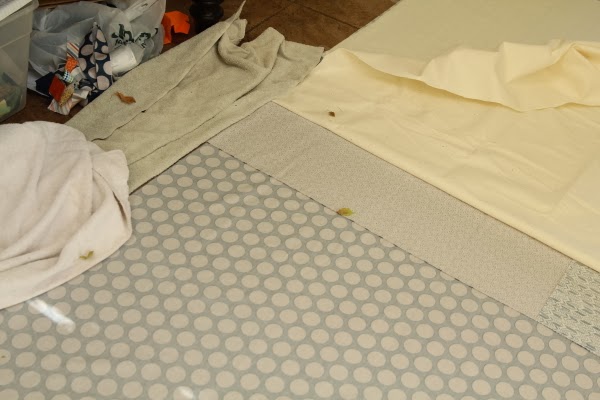 Sullivan's smells just like rubber cement, if you can remember that from your elementary school days. it doesn't last long, but there is most definitely a smell. there is also an overspray residue no matter how careful i was. i tried not to shy away from the edges to ensure that they would stick well, but it was hard not to. fortunately, for me, i was basting on a large, well-ventilated, tile floor area, so the residue should come up easily.

i opened the nearby courtyard doors, as well as my front and back doors, to keep the air circulating while i worked. there was a nice breeze blowing through, which kept the fumes moving. it also brought a lot of fall leaves in! (see photo above.) i know a few tiny ones got sandwiched in the quilt, despite my efforts to remove all of them. then the doors starting blowing open and closed, leaves were flying everywhere, dogs and kids were curious. it was like a bad comedy seen from primetime tv. all i could do was laugh and keep working. ok, i did want to cry a bit, too. laughing and pressing forward seemed better, though.

i got out some of my old towels to line the sides of the second quilt while i sprayed. there was still residue right along the edges of the quilt, all over the towels, and beyond them. i think a bit of the stuff just floats on the air until it settles somewhere no how you try to avoid it. 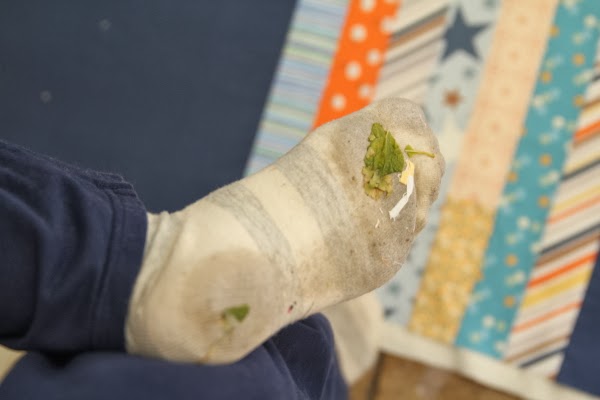 my socks were picking it up as i walked around. they also picked up a few other things, like leaves and fabric scraps.

i had a hard time getting the top smooth in a few places. it was a matter of being patient, pulling the fabric up, and repositioning very carefully, but i didn't like it a bit. the time difference was not significant enough to justify spraying over pinning. thank goodness the spray is repositionable!

i will say the top turned out pretty darn smooth. it was definitely easier to get all the seams to lay flat working this way. however, the back does not look as smooth as the front. it's slightly ripply or pocked looking. there are no full-out wrinkles, mind you, but it has a texture of sorts. i'm not sure how this is going to fair when i go to quilt.

i have yet to see how the machine and my needles react to the spray basting.

also, i'm uncertain how well the sandwiches are going to hold together until i get them quilted. i'm afraid to let anyone handle them, which was rather the point of basting this way. in addition, I'm concerned that the can says the product's properties will "lessen or diminish" with washing rather than saying it will wash out. did i just add some nasty chemicals to my babies' quilts that they will be inhaling while they cuddle their mama-mades?

it's definitely pins for me from now on.
besides, d4 will be out of a quilting job if there aren't any pins for her to remove.
Posted by hydeeannsews at 2:17 PM