constellation of the stellas 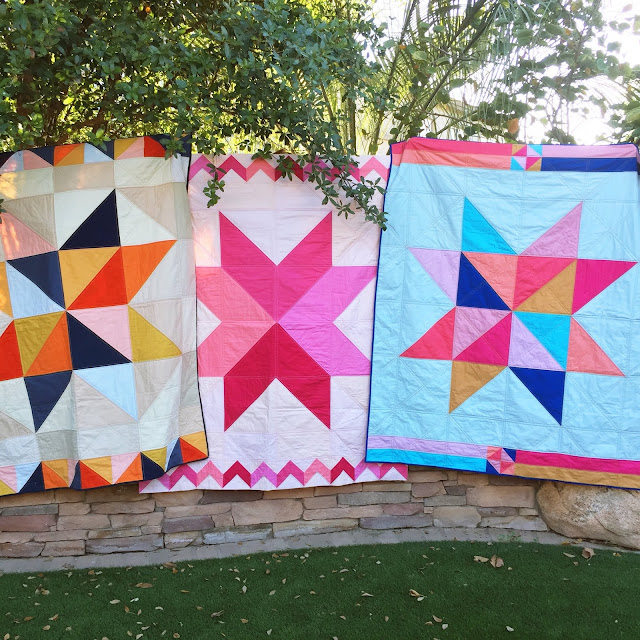 in 2017 i began a series of large sawtooth star quilt variations on a pattern that i named "stella grande."

in 2017 i also used instragram far more than i blogged, so there aren't many posts about my stella grandes as there could have been. 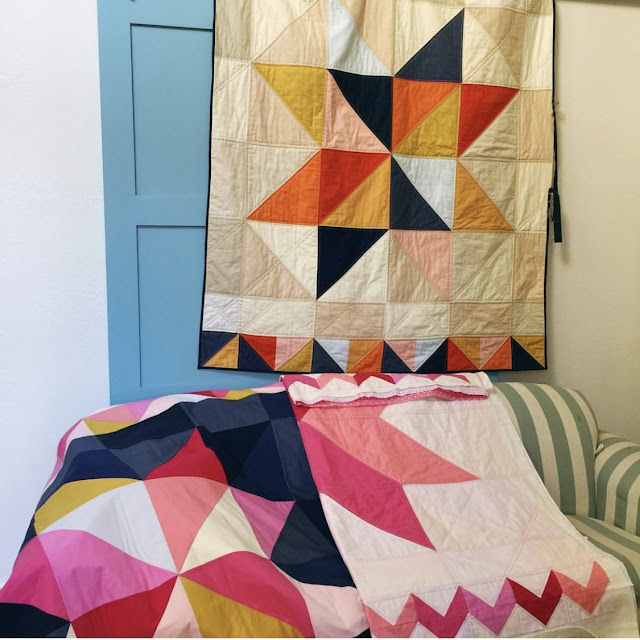 these large block, simple quilts didn't take much time to make, and i was able to do one a month for the first several months of the year. three of them even got completed, start to binding, during the year. the other two have yet to be done, but here is a look at the stella grande quilts i made or worked on in 2017:


january - star of the circus 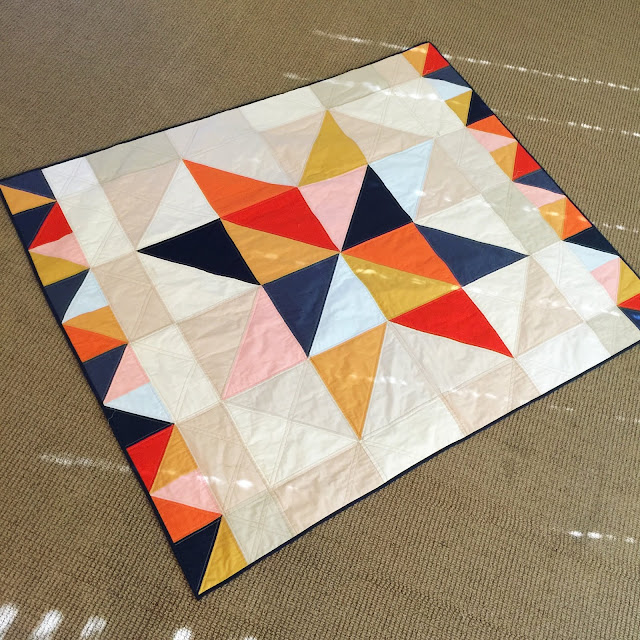 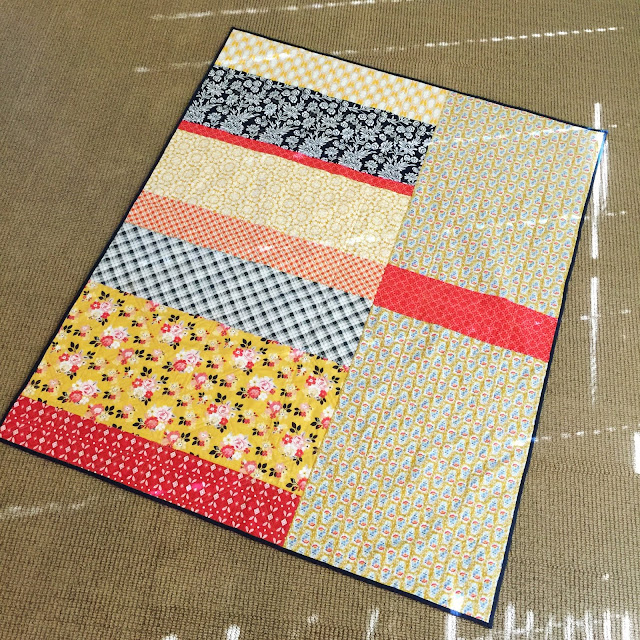 the first, and arguably still my favorite, stella grande quilt was "star of the circus." it's vintage colors and border remind me of an old-fashioned circus poster. the backing of this quilt still makes me happy every time i see it. this quilt lives in our family room and gets lots and lots of snuggle time.

you can read a bit about it's beginnings here.

january/february - love all around 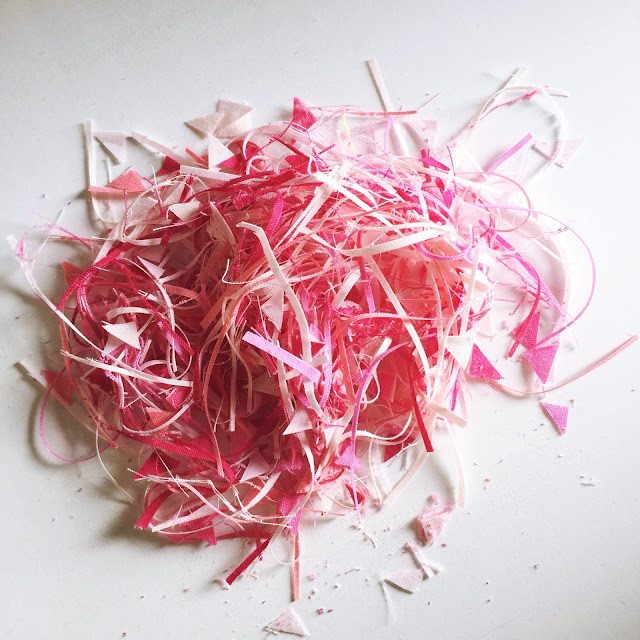 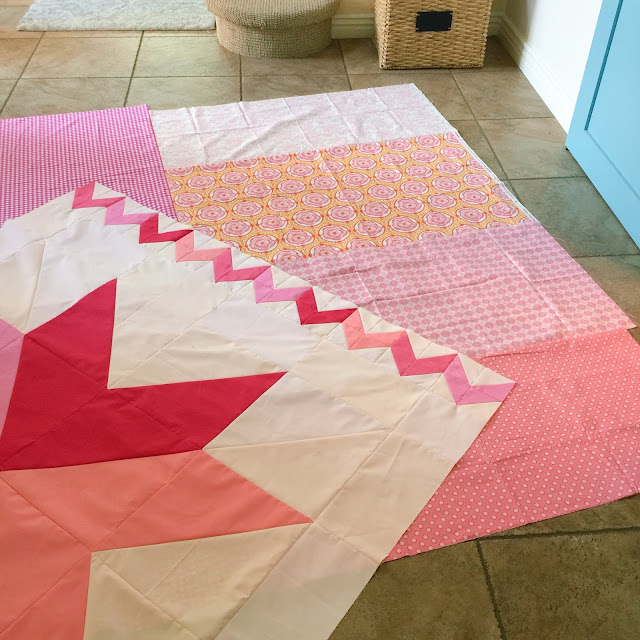 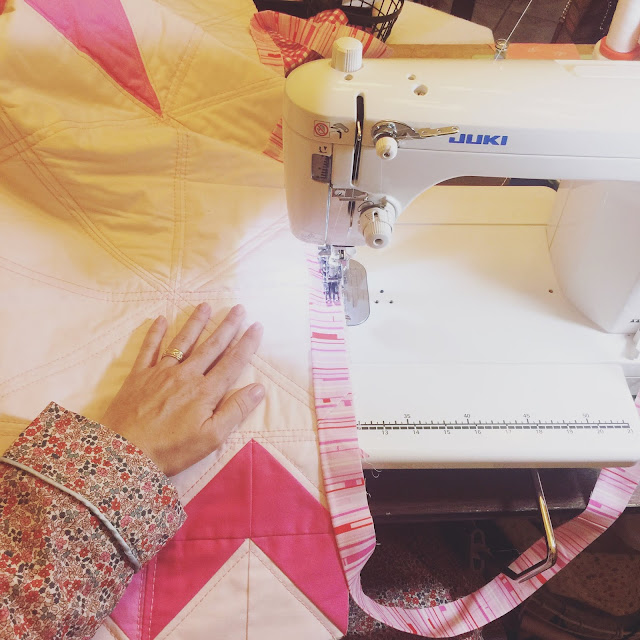 "love all around" did actually get some airtime on the blog. it was a political response quilt, believe it or not! you can read about its origins and meaning here. this quilt, which i gifted to my aunt lynn, never got a full finished shot on its own. you can best view it in the two opening photos of this post. and you can see the stash-busting backing above. i have altered the border in almost every single stella grande - this one has chevron-like little hearts made from hsts. also unique, this is the only stella grande so far to have a print binding rather than a solid one. the heather bailey stripe looked great with the monochromatic pink top. (that's me working on the binding early in the morning on my birthday in my dressing gown.) 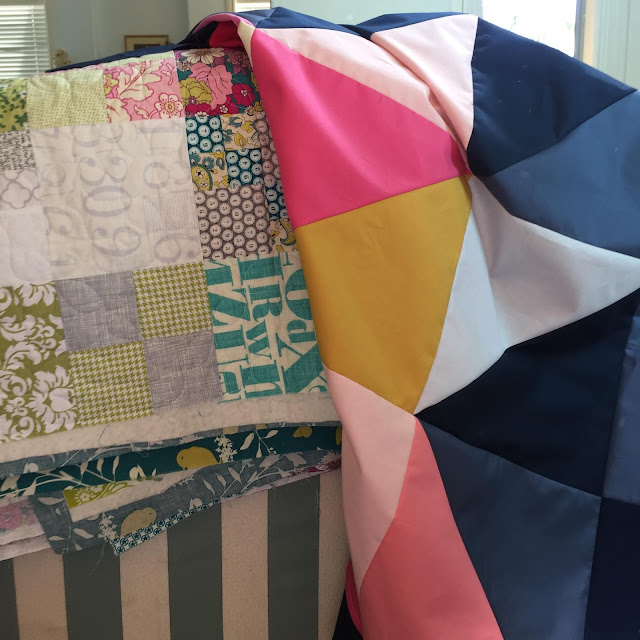 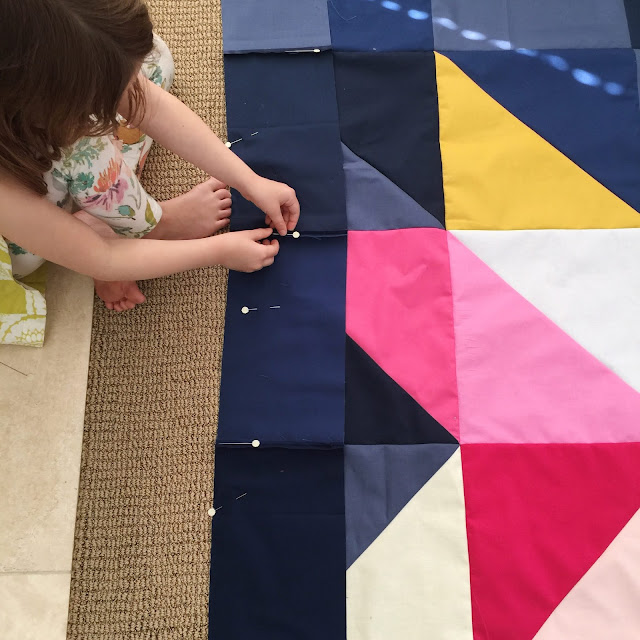 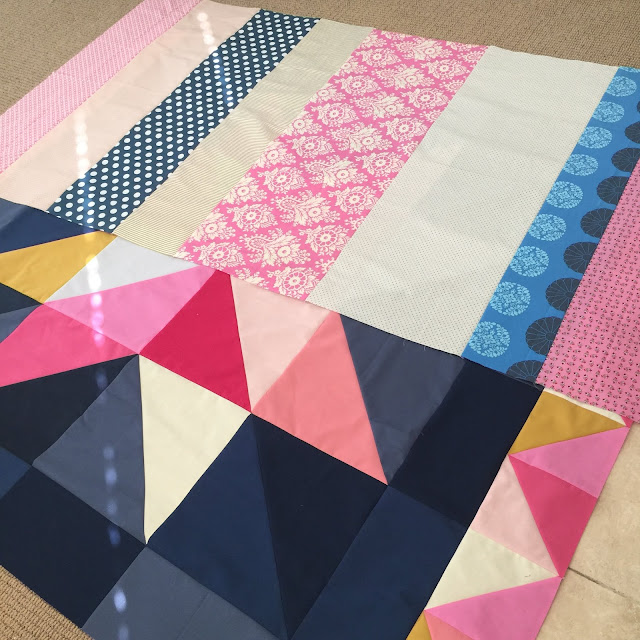 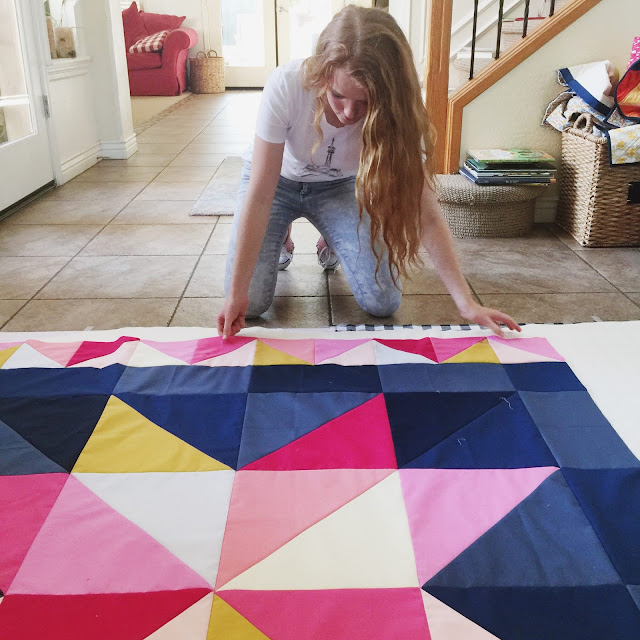 "guys and dolls" was inspired by a small gift bag i had on hand. and it always reminds me of a swimsuit my grandmother bought for me when i was in the 8th grade - that was the first time i had ever seen navy and pink together. this quilt also has a few touches of gold and white mixed in to mimic the foil hearts and jewels on the gift bag.

this is another backing that makes me really, really happy to look at. for some reason, i didn't quilt this one right away and it has been laying in the flat-lay/ready-to-quilt pile ever since. as soon as my kids' quilts are finished, it's going on the machine. 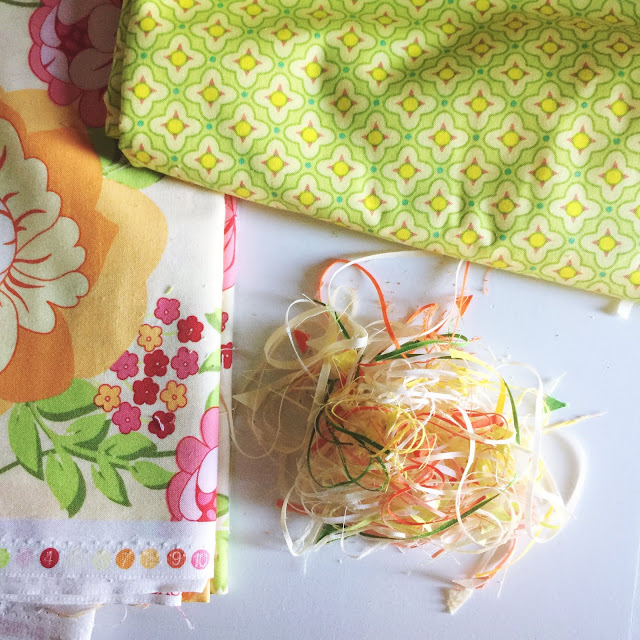 "citrus star" was supposed to be an ode to the eight citrus trees we have growing in our backyard, and to what i like to refer to as "citrus season" around here - that most beautiful time of year in the desert when the citrus is in season and the weather is absolutely divine (as opposed to the six months of hellish heat we get after it). i chose several shades of citrus to represent our various trees and wanted to mix in the blues of our spring skies. 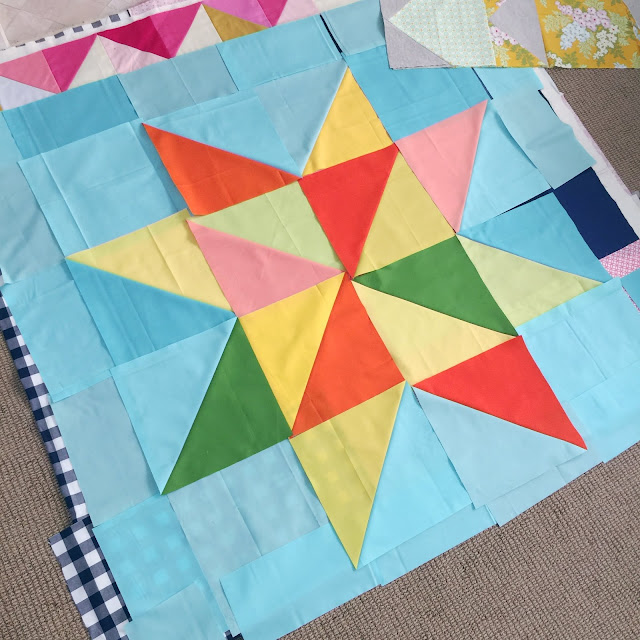 but something about the blues against the citrus colors in the star was way off. so after it languished for a while, i reworked it with a white background reminiscent of citrus pith and it looks much, much better - more like the colors in the first photo without any blues. however, it's still only the star medallion pieced at the moment, so i haven't bothered to take any new photos of it. yet another wip awaiting it's turn. 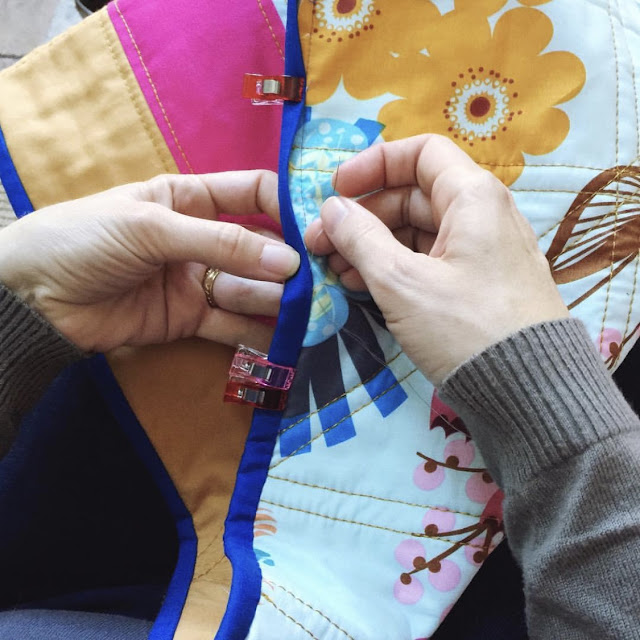 this quilt was a huge departure in color style for me. i was inspired by a favorite quilter on instagram, jenna valoe. i really doubted myself when i had collected all the colors for the quilt top, which were based on colors from jenna's quilts. but in the end, i totally loved it. this one is right next to "star of the circus" in my heart when it comes to favorite quilts to snuggle. 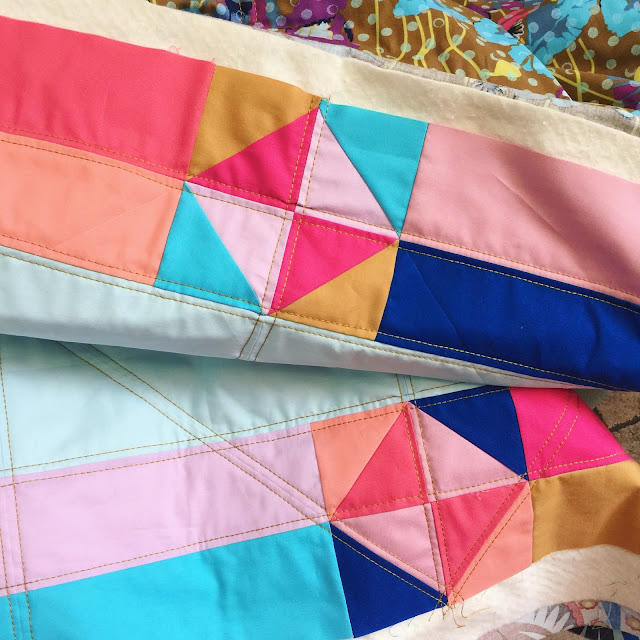 again, i made a unique border for this quilt variation. there's a small diamond medallion in the center of four strips. maybe you can tell the colors in one border's strips are the colors in the other's diamond? the colors are all pulled from the star's palette. i like this one a lot! perhaps i should have made diamonds to go on the ends, too. but i never think that when i'm with the quilt, only when i'm looking at it in pictures as a whole. 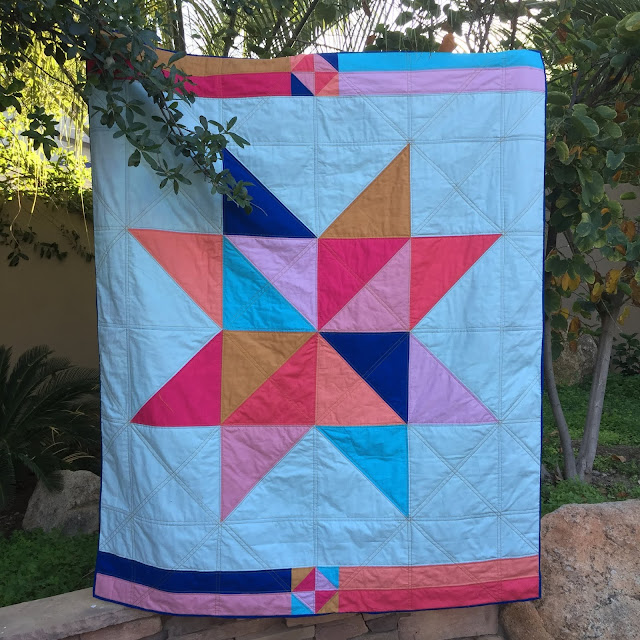 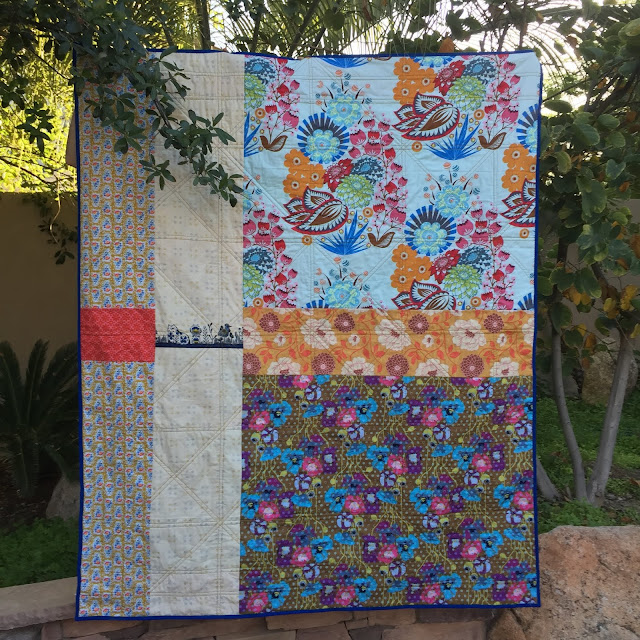 the backing was another wild, risky venture for me, but it all came from stash and i like it, too. now that i'm used to it. the strip on the far left is actually left over from from the backing of "star of the circus." i like that it sort of makes them siblings in a way.

so there you have it - the five stella grandes from the beginning of the year. i had many other combos in mind, enough to finish out the rest of the year. but i never got back into them after summer vacation started. i did, however, churn out seven more for my kids for christmas! so i had 12 for the year after all. 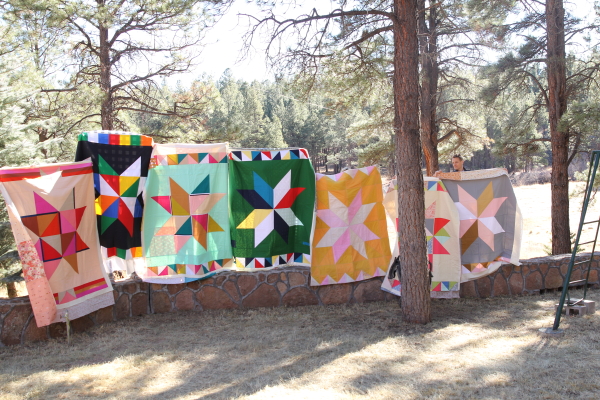