the light of liberty

this is a photo shoot process post. it's heavy on photos (28) and words, too, to describe my thinking. you've been warned! i've linked in with plum and june's photography workshop party. this is a more technical post. i also wrote a basic, entry-level photography post here.

while admiring beth's mini summer quilts at plum and june, i realized briar rose was now available and i didn't have any yet. yikes! even though i'm trying to fabric diet, i hopped on over to fabric.com to get some. however, as darling as the line is and as much as i adore heather ross's designs, i decided i could live without a lot of briar rose. my willpower kicked in and i only selected two prints to coordinate with the pile i already have set aside from previous lines. whew! i patted myself on the back for being so good.

then, . . .
for some reason, i checked to see what liberty of london lines might be available. uh oh! lots of new tana lawns. that's where the willpower (mostly) flew out the window. i ordered 5 - 1/2 yard cuts of some irresistible prints. oh, shame on me! why, oh why does that stuff have to be so expensive? and gorgeous and completely irresistible to me? utter temptation.

well, the whole caboodle arrived yesterday afternoon during our family cleaning hour. i didn't have time to look at it, so i set it aside, forgetting it until this morning. the dog woke me up at the crack of dawn, so i had some quiet time to myself. i got to sit down with my new lovelies and just admire them to my heart's content. they truly are exquisite. i can't help repeatedly running my fingers over their silky texture. and the colors! the dainty florals are my favorites. something about the delicate line drawn flowers appeals to me.

ah, it was a special time for just the two of us this morning. ha, ha!

as i caressed my darlings, i looked up at the entryway and noticed the amazing morning light shining through. i have these large wicker baskets lining the entry; one for each child to keep their shoes and such in. the sunlight streams through the window in the morning, setting the golden baskets aglow in such a lovely way. it reminded me of laura's photo shoot post. and liberty reminds me of laura. suddenly i wanted to combine the fabric with the baskets and light. it seemed a perfect match.

it turned out much tougher than i had anticipated. having two different aspects i wanted to include really complicated the matter. i could get one or the other, but featuring both together proved illusive. i think i asked too much of the photo. in truth, none of the photos capture the details of the fabric designs enough for me. still, it was fun playing and working on my skills.

the very first photo in this post (#1) is the first one i took. and i do like it. but it doesn't showcase the fabrics as much as i wanted to. the yellow print, my favorite, is out of focus thanks to the shallow depth of field i got with my 2.8 f stop.

i tried putting the fabrics in a row on the backside of the basket so they would all be in equal focus:
﻿
but to get the basket included, i was too zoomed out.

i zoomed in, including only a bit of the basket:
﻿
but i lost the points where the basket was lit up and sort of sparkly in the bright light.
i also tried the angle in the 2nd photo of the post (#4). that one looks rather like dishtowels in a basket. i was trying to include a bit more of the basket, but i don't like the way the handle covers the fabrics.

at this point, i was frustrated with the styling, so i went back to where the light sparkles on the handles. i placed the fabrics slightly differently and tried again:
﻿
the aqua capel in the back is still too blurry. and the handles are dead center; i prefer off centered.

i was shooting in P (program) mode, letting the camera pick my settings, but with the exposure compensation bumped up for more light. it was tricky because i didn't want to totally blow out the handles yet the fabrics still needed to be bright enough.
﻿﻿
while looking at my settings, i noticed the white balance was set to "tungsten light", which is for light bulbs. oops. i switched to that last night while photographing something else indoors sans flash.
hey, that's a lot warmer looking! more of the golden quality of the light shows. but you still can't see all the lovely fabrics clearly. and the whites are less crisp from here on out with the white balance shift. it's a choice of what to sacrifice.

i moved the fabrics again to get them closer together:
still not happy about the blur. i decided to go completely manual so i could move the aperture setting and still control everything else. what the heck.

there was a lot to think about as i was not only trying to find good styling but the proper settings. sometimes one or the other is sorta taken care of for you and you can concentrate on one. otherwise, you have to keep switching your mental focus. it's a fun challenge and brain exercise.
i opened up the f stop a little so more of the photo would be in focus. however, it was still pretty shallow and because i focused on the fabric in back, the front two are still blurred. it's a nice shot of that pretty june's meadow in yellow/white, though.
﻿﻿
﻿
i framed this one a bit differently, but was still having depth of field issues.

﻿
so i went back to the laundry look at the back of the basket:
the light coming in the window was shifting all this time, as light will do. now i had serious contrast issues going on. yuck. the fabric is not bright enough and the basket is too bright. also, that draping looks sloppy.

i tried a couple and gave up. instead, i lined them up along the handle side and moved around so i could shoot more straight on:
argh - photo bomber! the toddler was up at this point and adding yet another aspect to my mental calculations.

remove baby, shift frame slightly:
getting better but i wanted more light to brighten the fabrics.

i got that angle down and decided to attempt the laundry shot again:

although i like the way the light bounces around here, it's just not what i was going for with the picture story.

what you can't see happening in all these shots is this:
. . . my cute little assistant. she was continually trying to replace my lens cap (bugs her when it's off) or style fabric for me or climb on my head. 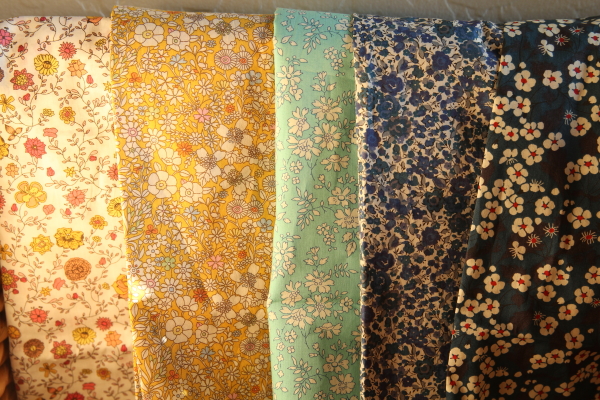 because the light had moved, i decided to move the basket itself. also, i had two more liberty prints i wanted to photograph. in the interest of time, i added the darks to the lights for a complete group shot. the aperture/f stop got changed, too, for more light.
that need to balance the light on the baskets and the exposure on the fabric was a problem again - i don't like either here. the fabrics definitely needed more light and to all be in focus (more depth of field).

so i closed the aperture down to f4 (greater depth of field) and had to switch my iso higher so i could still hand hold the camera and not get any shake. if i had moved the shutter speed, i wouldn't have been able to hold the camera still enough. most experts say don't hand hold below 1/120, but i have a steady hand and feel comfortable taking it to 1/60. i'll actually even attempt lower if it's not a vitally important shot or i don't have an option.

now, this looks a tad too bright here on the dark teal mitsi at the left and also on the yellow june's meadow. but i like it on all the other fabrics.

and here, when writing the post, i noticed something important. the above shot looked perfectly exposed and pretty sharp on my camera's little lcd screen but less so on the computer. i think one major reason for this difference, besides size, is that on the camera the shot is surrounded by black, which makes it pop more, and here it's encompassed by white, which is dulling it slightly. that's something to keep in mind when shooting, i guess.

i tried one last angle on this styling to see how it looked. in order to not cut the fabrics off at the bottom but not have to include so much empty space at the top, i went vertical:
again, what you can't see is the way i'm laying on the floor to get this shot. but i couldn't lay flat on my back, i had to be raised a smidge to get the right angle. this was tricky enough photo yoga without the baby involved, she made it near impossible.

i tried draping them and going horizontal again:
all that empty space on the right bothered me. i added a 2nd basket to fill it:
that blocked my light and looked dumb.

i removed the basket, placed the fabrics closer together, returned to vertical orientation:
oh, almost! the aqua capel looks yucky.

redrape the capel, crop in a tad, shift frame a touch :

well, the light must have changed again because this is a bit lighter and i didn't adjust any settings!

everyone was awake and breakfast needed to be made at this point, so play time was over. i had to put my camera and pretties away.

if you actually read all that, or even just skimmed down to the bottom, which one do you like best? and why?

now i get the fun of deciding what to do with these darlings! it has to be perfect. i'm blank on ideas so far.
Posted by hydeeannsews at 12:00 PM