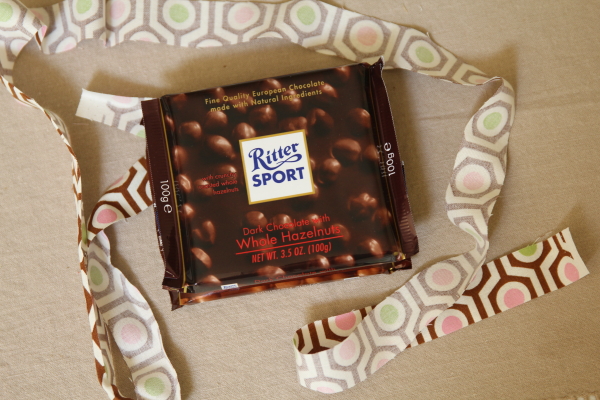 this afternoon i had an appointment to meet a lady who recently moved into our neighborhood and attends my church. (my other friend, linette, and i've been assigned as her visiting teacher, which is like being assigned to be a friend - it's awesome.) i wanted to take her a small something to say "welcome," so i planned to bring along one of my favorite chocolate bars in both it's dark and milk versions. instead of putting them in a gift bag, i raided my scrap basket for a piece to tie around the chocolate into a bow. 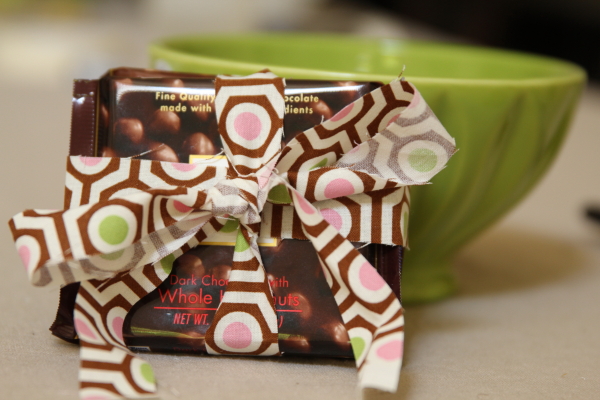 i found a bit that was about 3/4" wide by the width of fabric, which was trimmed off the backing i recently used for the 3 panel baby quilt. it had brown (chocolate) as well as pinks and greens in it.

with the bow tied around it, cute frayed edges and all, it made a sweet little package. i promise the bow looked a lot cuter in person. somehow it looks messy and less shabby chic in the photo.

i thought it made a unique and pretty finishing touch to the chocolate.  i've used scraps to dress up at least 2 other gifts (here and here). it's a fun way to use up scraps and represent yourself well in your wrapping.

other than that, i actually spent the whole morning sewing with my dear friend jill for the first time in months. we got a lot of catching up with each other done, but no finishes. maybe next week. 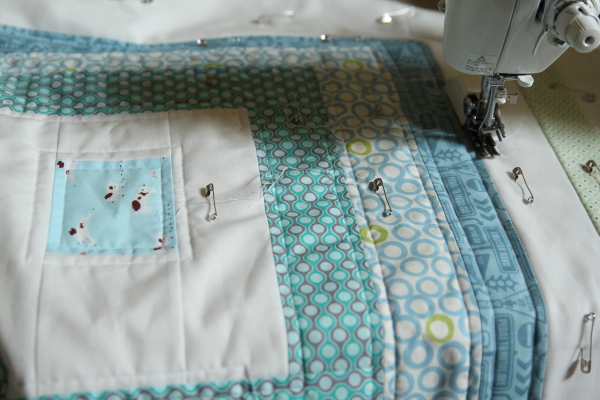 this fella almost made it to the finish line. i had planned on getting up early this morning and completing it, but my husband kept me up way too late. marriage and sleep before quilting.
i'm on the second to last round of echo quilting the squares. as soon as this is posted, i'm heading right back there.

linking in to crazy mom quilts! i know, i know, my "finishes" are being quite widely and liberally interpreted lately. life got in the way of the quilt finish i had planned this week. it'll be done next week for sure.
Posted by hydeeannsews at 3:06 PM