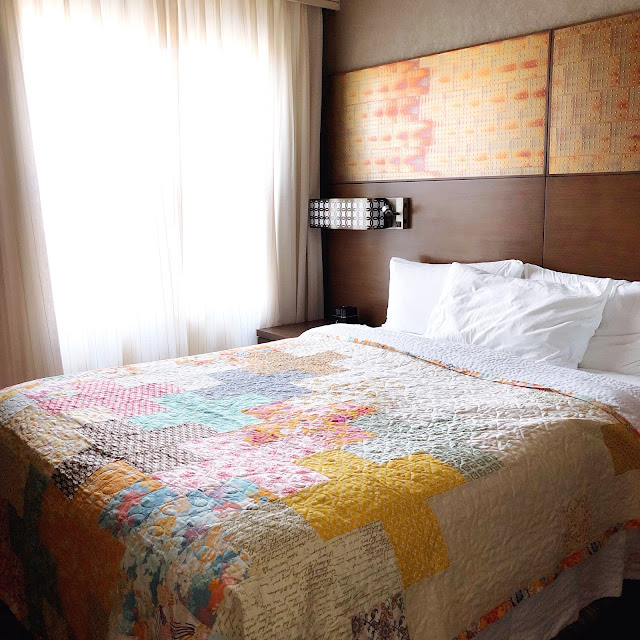 part of my summer travels have taken me along the california coast from santa barbara to monterey, to deliver a daughter and friends to a church youth conference (efy) and to spend time with my husband's grandmother. the scenes were pretty, the weather was a divine break from our desert summer temperatures. i took two quilts along with me for handwork opportunities.

while in santa barbara, i laid "groovy summer love letters" out on the hotel bed for some added hominess to the room. i've never done that before because i don't usually travel with large quilts. but this one only needed the binding finished and i was hoping to get a beach shot of it when it was done, so it went along for the trip.

the quilt looked nice with the colors of the hotel room and in the sunlight pouring in, so i took a shot of it to post on instagram, but didn't do that til a day or two later. that's when i learned fellow quilter gina (party of eight) and i had been in the same hotel at the same time! if you read the comments in the IG post, you'll see us discover this. it's still blowing my mind whenever i think about it.

the rest of this post is mostly scenes from california interspersed with me working on the quilt. and then a bit on when the quilt's destiny made a large departure from my original intent. 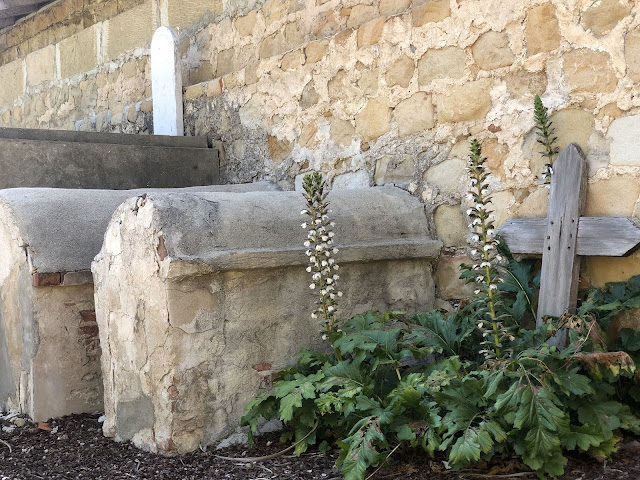 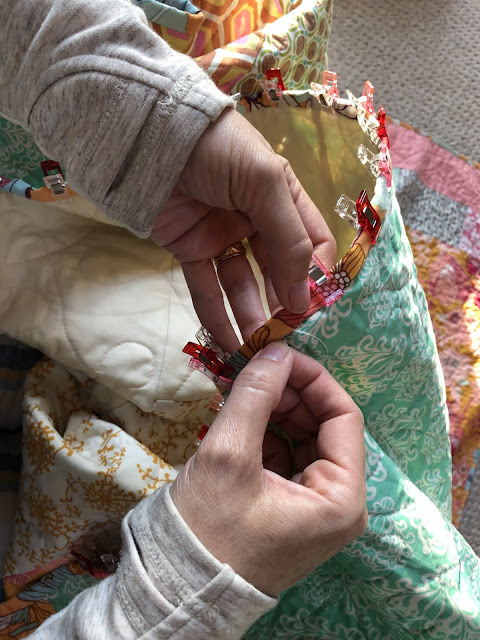 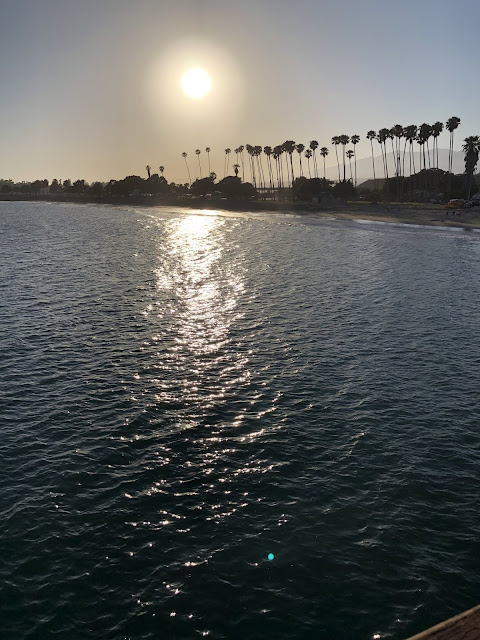 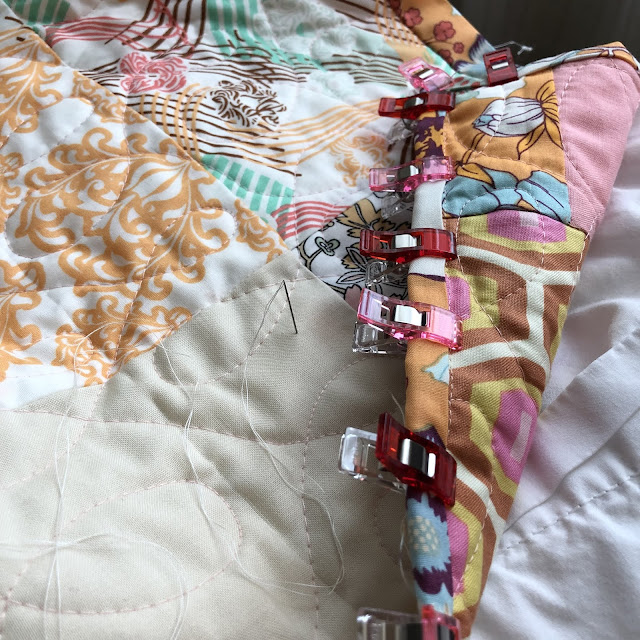 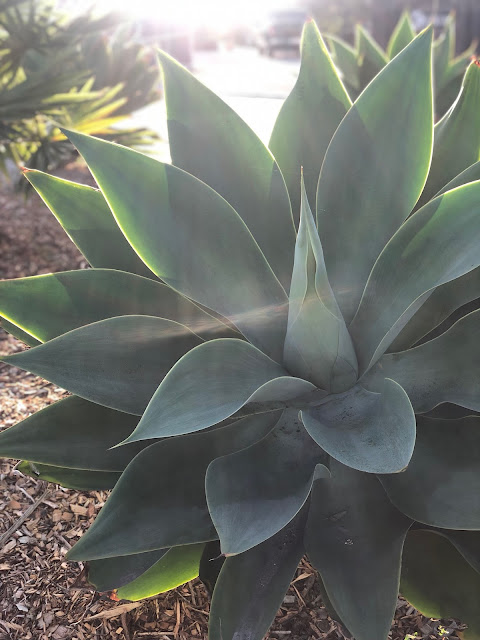 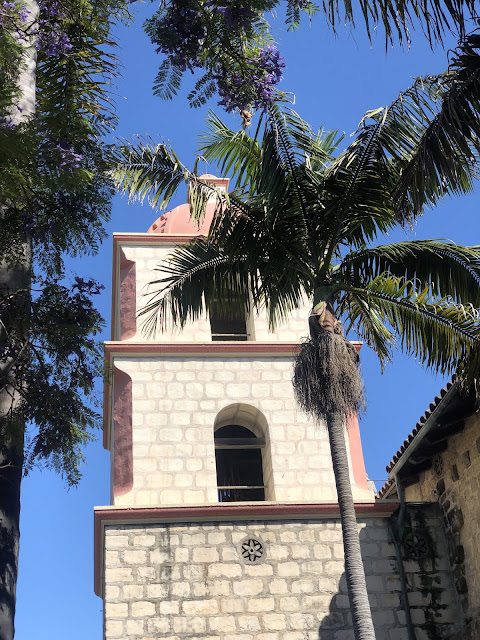 at some point during our visit at grandma's house, a place i've been going to for nearly a quarter of a century, i realized that the colors of the quilt fit in pretty well with grandma's decor of pinks, blues, and tans. and i just decided it actually belonged with her and that house.

i've been working on this quilt for at least 3 years. i fell in love/became obsessed with the inspiration quilt made by jolene of blue elephant stitches long before that and ordered a fat quarter set of the "summer love" fabrics, by bari j for art gallery fabrics, online so i could make my own version of the quilt, which i enlarged and supplemented with coordinating bits from my stash. so many leftover pieces of fabrics i loved went into this quilt because i fully intended to keep it for myself. my oldest daughter was also very partial to it.

as usually happens with on-line orders, when the fabrics were actually in my hands, i found some of them didn't appeal to me as much as others. it's pretty rare i am in love with every single print in a fabric line, so this wasn't much of a surprise. i ditched a few of the prints entirely and included some i was feeling "meh" about at the time but thought i could live with.

interestingly enough, those handful of "meh" prints have been grating on my sensibilities as of late and i was less in love with the quilt over the last several months than i had originally been. ever since i completed the quilting on it earlier this year, it's been folded and draped on a couch in my piano room. as long as i folded it so i saw the fabrics i loved most, i was okay with it. i figured i would eventually give it to my oldest daughter if she still liked it when she got home from her volunteer work in europe this fall.

but when inspiration hit me at grandma's house, i knew my daughter wouldn't mind her great-gran having this quilt and because of the way i'd been feeling if-y about it myself, i was able to let it go. the truth is i don't part with my quilts easily. quilts for my kids stay in my home and i have no problem with that. but i have given away very few other quilts, except for baby quilts. the reasons for that are complicated and will make another post sometime.

suffice it to say, i wanted to give this one to grandma and i was emotionally in a place i could and would do that despite my former attachment to it. in fact, i marvel at how the timing of everything along this quilt's journey into being led to it being finished here at this time so that i would know it was meant for her. i hope she gets to enjoy it for a while yet to come. at 86 she's still quite active and in good health. she intends to live up to her older sister's 96 years, and i think she has a very good chance of doing so!

i have to say i like this way of gifting quilts much better than having a deadline and feeling guilty about not completing something for several years! perhaps i would have chosen fabrics for it a bit differently if i'd known i wasn't keeping it, but that's alright. it's a special experience to realize a quilt was meant for someone else all along. 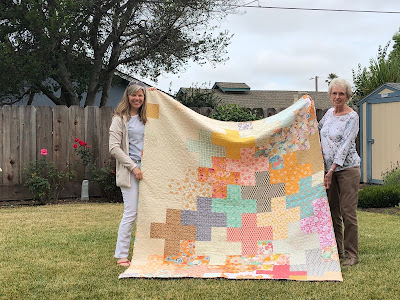 grandma has always been a devout presbyterian, so i like that the plus pattern of the quilt could be viewed as crosses. that's just one more element that makes it fit her. she seemed pleased with the quilt. she didn't say a whole lot, but she did appear to be touched with the gift. it was the right thing to do and i'm glad i did it. no regrets.

in case you were wondering if i ever got those beach shots with the quilt - i did.
that'll be another post soon.
Posted by hydeeannsews at 7:54 PM