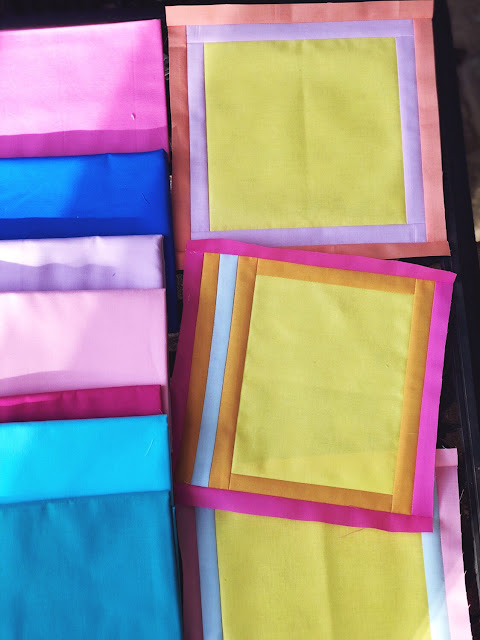 in february, as i was falling asleep one night, i dreamed up a new quilt concept. i don't think i've ever posted about my "cheery" quilt here. the idea was sort of a mash-up of two projects i'd seen on IG that inspired me: 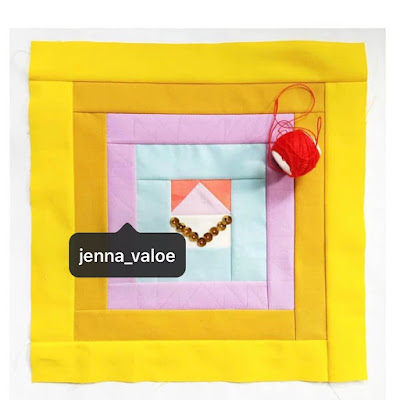 the colors of this log cabin block by jenna valoe 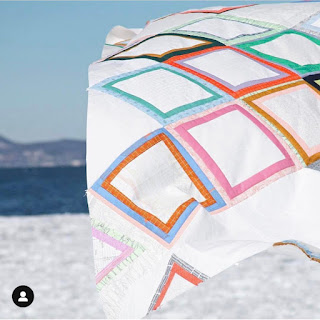 and the skinny frames and layout of this quilt by ashley at film in the fridge.

the idea was to make the centers yellow and work in an improv manner to make frames of various sizes and with a few blocks that broke all the rules, in a color palette similar to the one jenna used, but with some electric blue and bright magenta pink, and maybe darker ochre tones, too.

it was a very unusual palette choice for me and i couldn't figure out why i was interested in it, but it got a hold of me and i went with it. the vibe feels like the 80's and my childhood; very Rainbow Brite like.

however, once i started working on it, i nixed the electric blues (good-bye Rainbow Brite), preferring a softer feel. 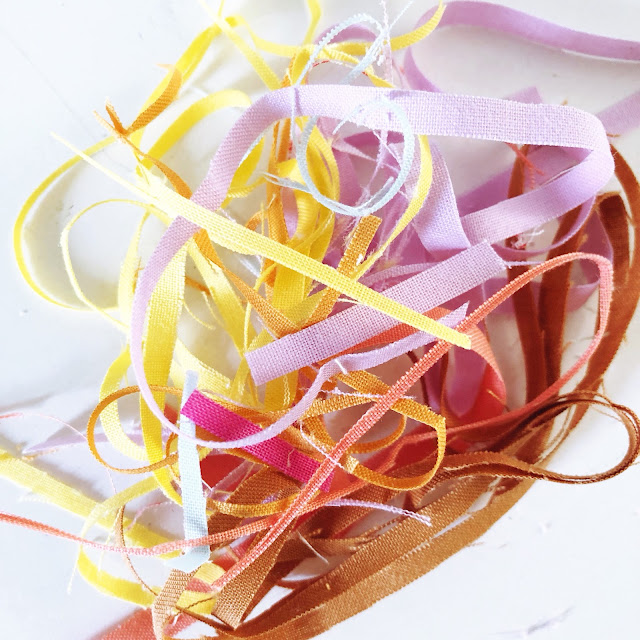 when d3 saw it, she said, "are you making an easter quilt?" that's when i realized it does have an easter feel to it. the trimmings looks a lot like some easter basket grass. the colors remind me of a kevin henke's book we have about a little boy mouse who is completely enomoured with the yellow marshmallo chick he gets in his easter basket, which makes it another easter connection.

while i did start this well before easter, it did not get completed for easter or any spring at all. i had to set it aside for my many handwork projects and summer travels. 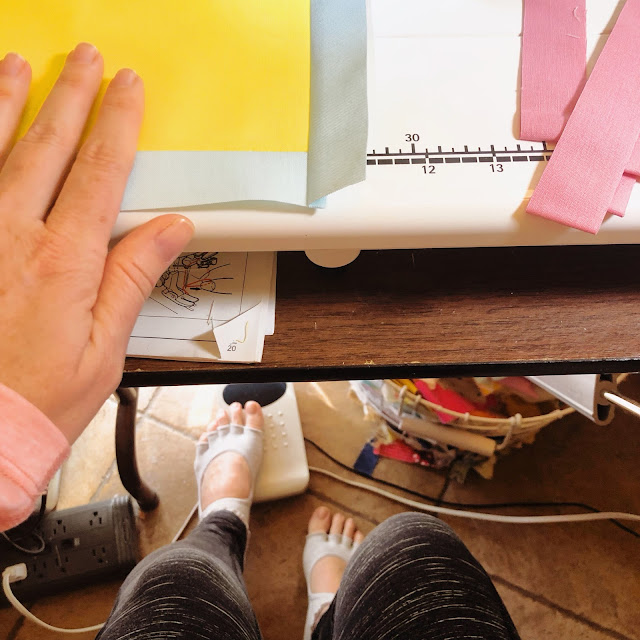 sidenote - i found this photo of me working on the quilt (in my pilates clothes) that shows me driving the machine goofy-footed. i sometimes have problems with my right knee and was experimenting with using my left foot on the foot pedal. it worked out just fine. i was surprised how ambidextrous my feet were for sewing. however, i noticed i was also standing my right foot on point whenever i used my left foot to sew, which doesn't make any difference for my knee. so i'm back to sewing with my right most of the time since i can't seem to remember to keep my foot down if it's not driving. 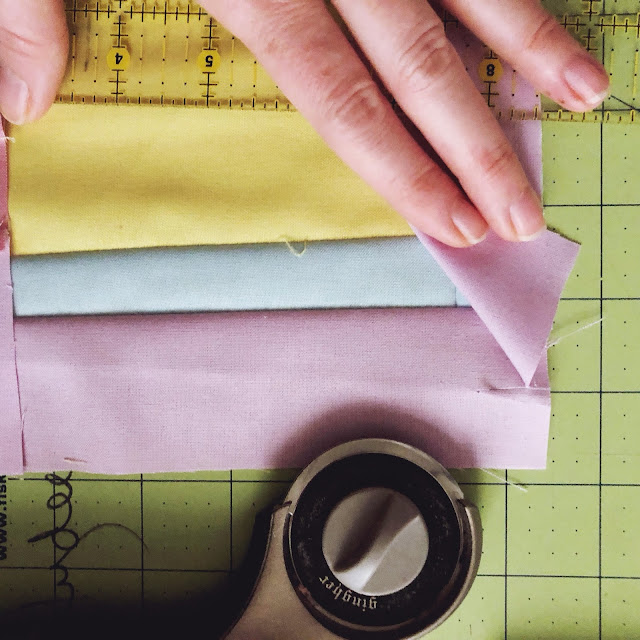 a home-ec moment: was making a trim on one side of a frame and knicked the neighboring piece, which didn't need any trimming. ugh. i had to do some extensive make-up work to fix both pieces after that. it provided a chance to work on my partial-seam skills. yay. 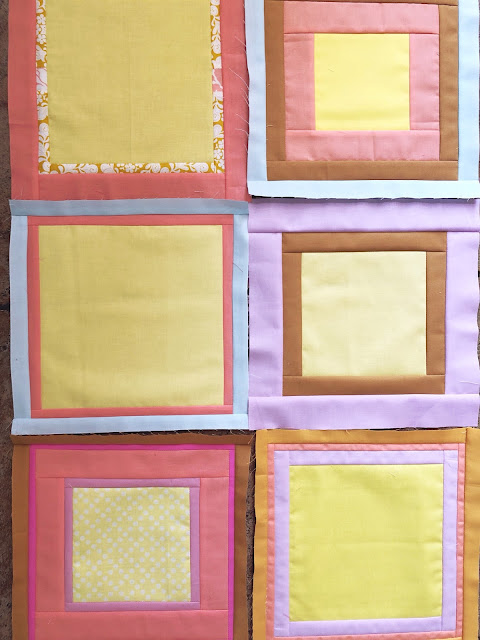 i'm making 11" blocks (except when i forget and trim them down smaller and then have to enlarge them). the plan is to size the quilt in a 5x6 block grid, which will be 55"x65".

i was going to make all the center squares really large and the colored frames skinny, like ashley's quilt, but i didn't want it to be overwhelmingly yellow, so i began playing with more width in the colored frames. it's completely random. i start with a square, add on one frame of whatever width i cut, and then add one or two more until the block is the size i need. 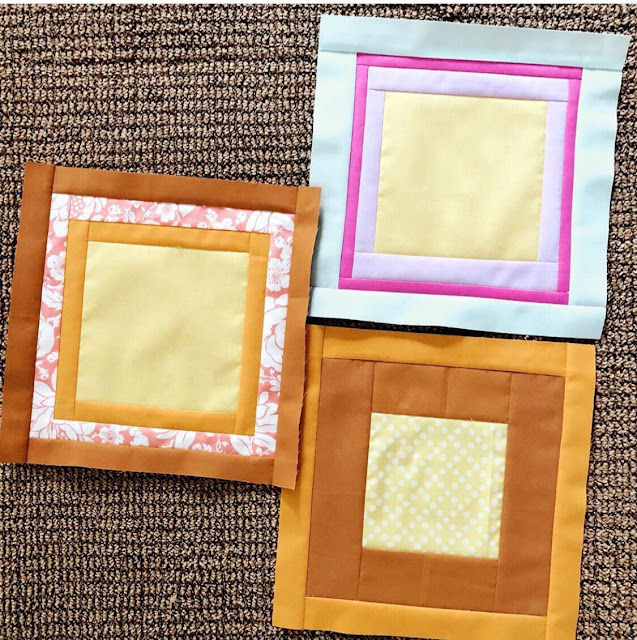 i've snuck a few monochromatic prints into the mix, just for fun. they also add to the easter feel of the quilt. 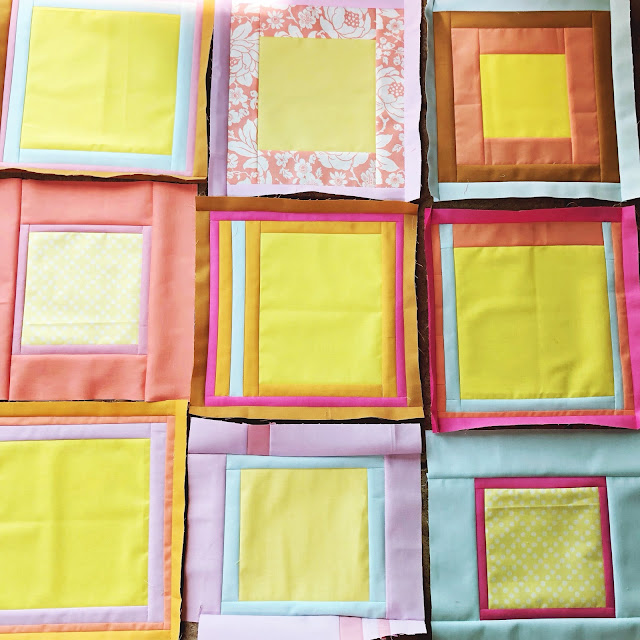 i call this an improv quilt because i don't have a set plan for it, rather a general formula.

basically, these are what i call "frames blocks," when you have a large center square and make a few frames around it. i think technically they could be considered "courthouse steps blocks," maybe? i don't know if courthouse steps blocks traditionally have certain dimensions to their steps or not. that would, i suppose, be the difference from my "frames." but in construction method, they are the same as courthouse steps.

another improv element - i've been throwing a few extra bits in at different places; like when i need to make a strip for a frame longer, add another color in there, or when i vary the color or width of one strip in the frame. stuff like that.

so that's my "cheery (easter) quilt."
i've got 14 of the 30 needed blocks done.
since we got home from summer travels last week, i have been making one or two blocks a day in the afternoon before i get dinner going. they are adding up nicely.
Posted by hydeeannsews at 4:43 PM