wip-ing all over the place 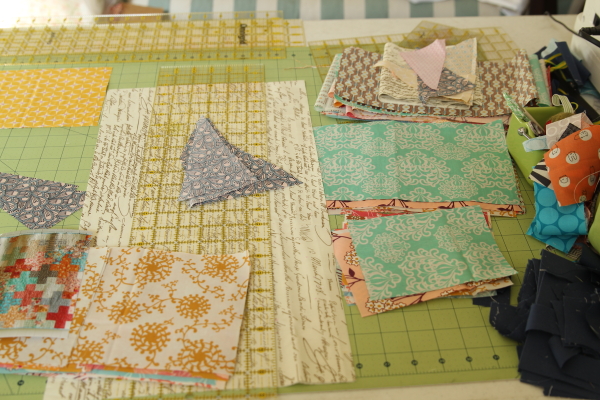 one look at my cutting table and you can tell i've changed tactics again.

back in november, when i was desperate to get my oldest son's quilt done before his birthday/family pictures/christmas/anytime at all, i put myself on strict orders to work on absolutely nothing but that quilt until it was done, the exception being handbinding "dreaming easy" because it couldn't interfere with my time at the machine working on that orange and blue wonky mess (hereafter refered to as OBWQ).

the result was a lot of anxiety, unhappy time at the machine, and outright avoidance of sewing altogether. once all the (self-imposed) deadlines passed, i simply gave up on sewing. squeezing any time out of the holiday schedule was near impossible anyway, so why gobble up time with what felt like a chore?

as much as i want my son to have his mama-made, i also want to enjoy the process of getting it done. at least a little bit. so last week, when i had a sewing day open up (que sunshine and heavenly chior), i decided i would work on that OBWQ and alternate in some selfish incentive sewing, too. one block of the chore quilt for one pass at another project. part of what inspired this decision was the completion of "dreaming easy." golly, i love that quilt! it makes me so happy to look at it and snuggle under it and spread it out on the spare bed. it's sort of renewed my love of quilting all over again. i thought if i could pace myself with some of that kind of sewing mixed in with the chore stuff, i might find the joy and motivation again. even for the OBWQ.

and you know what? it's working! 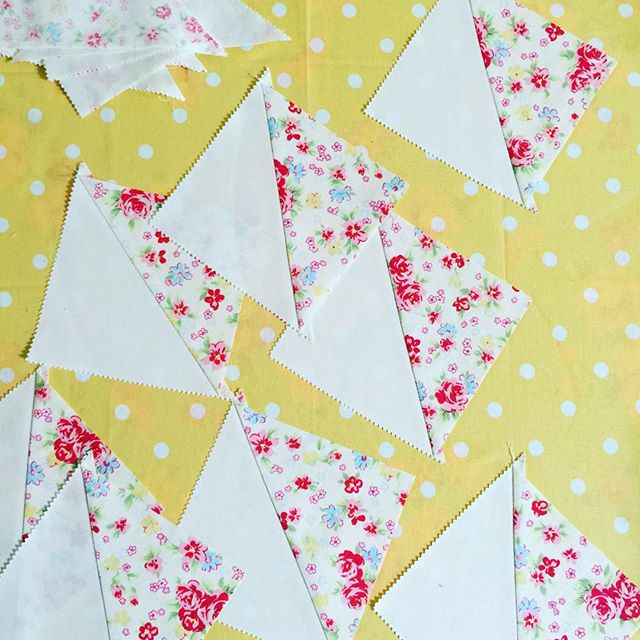 after making my wonky log cabin block #11, the first thing i added into the mix a set of hsts for my valentine's pinwheel project, started last year. i sewed together one fat quarter's worth of pinwheels and knocked out another two log cabin blocks at the same time! 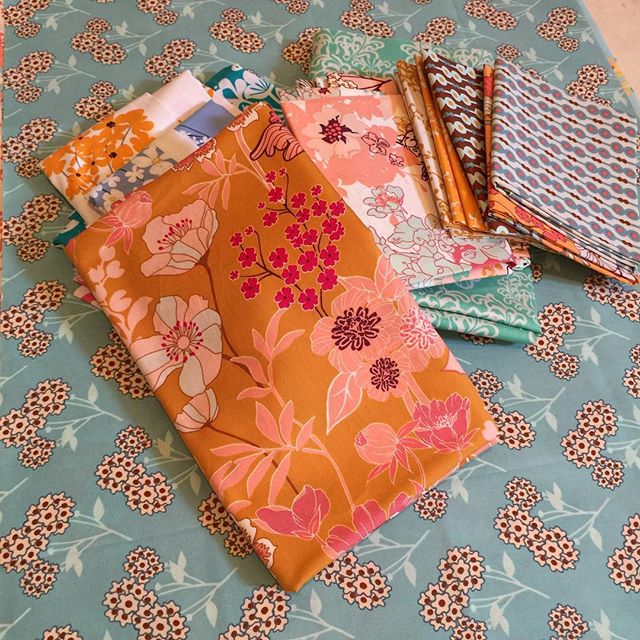 three log cabins and a handful of pinwheels was highly motivating! i started eyeballing some groovy art gallery fabrics and complimentary prints i had set aside ages ago for a plus quilt like jolene's featured on her blog, blue elephant stitches. i love, love, love, this quilt! i was going to buy it from jolene, but for various reasons decided to make my own.

so anywho, last friday night i decided i felt like cutting (totally weird!) and got pressing my fat quarter set and cut into this baby. it was already started in my mind and all i have to do is follow the photo of jolene's layout, so it didn't really feel like a new wip to me at all. i quickly worked out the maths and spent some pleasant time cutting away. now i have a pretty pile of cut fabric i can use if i ever feel the need to just throw something together. i also photographed the process so i can make a quick tutorial later on. 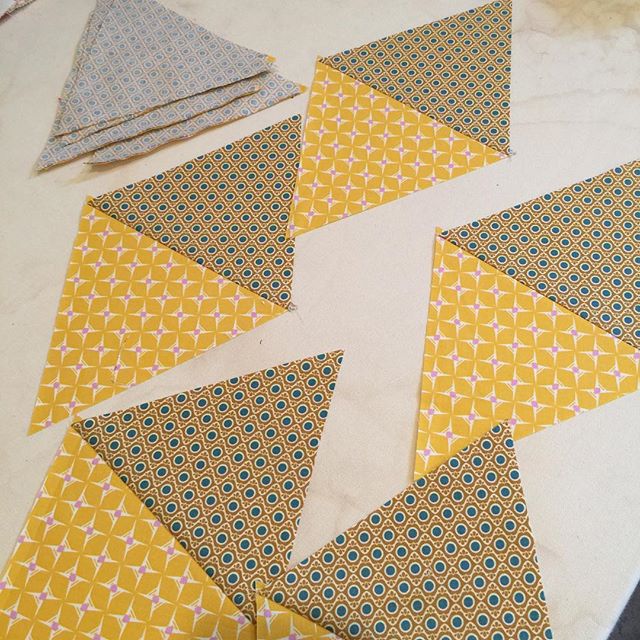 and since cutting was suddenly so fun, i made another log cabin block (only one to go!) and then cut some more triangles for my indian summer quilt  from rachel's pattern for her angled class (which is being offered again right now) that has been hiding away under the OBWQ on the design wall all fall and winter. 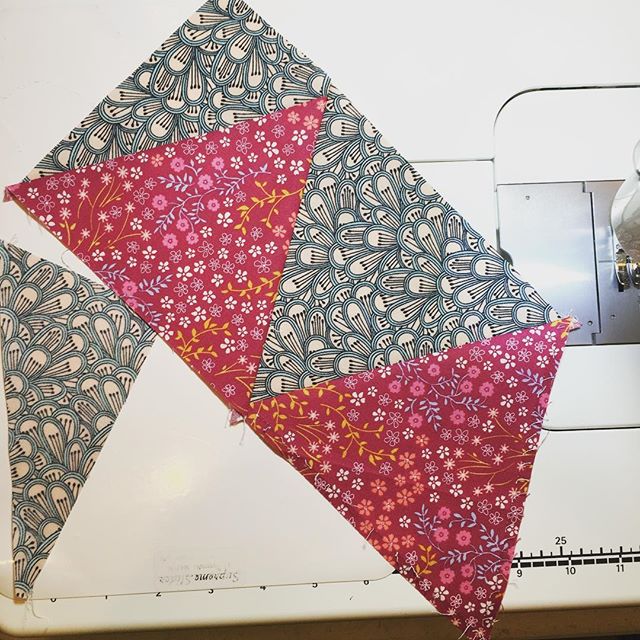 i'm happy to say that sewing triangles together after several months off was like getting back on a bike. i could remember how to put them together properly, the cutting tricks i discovered, and trouble shoot any problems i had along the way. these are so easy!!! i could sew triangles all day long. with only about three rows left to go, this should be a finished flimsy top in no time at all. 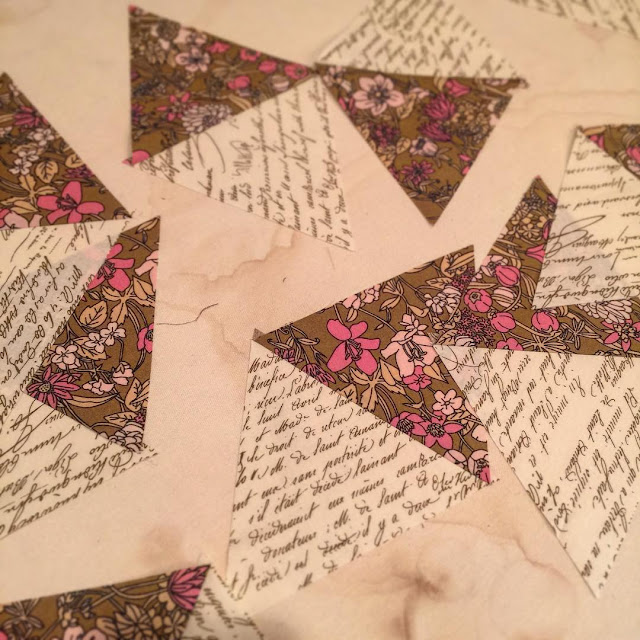 i like the diamond shape that's created when i begin putting the first pairs together and press them open. it makes me wonder what i could do with these shapes in some future project. this particular combo is quite pleasing, i think. 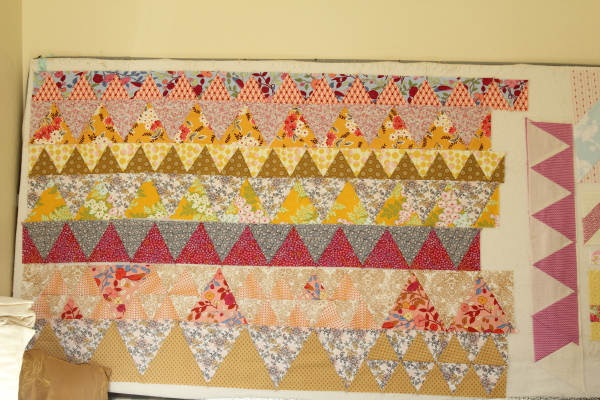 after i had a few more rows of triangles complete, i needed to see the completed portion again so i took down all the OBWQ blocks off the top and set them aside to be sorted and laid out for sewing together. this warm and golden view met my eye. i do like this project! it's all jumbled right now since the rows weren't put up in order, but i can see where it's going and like it a lot. 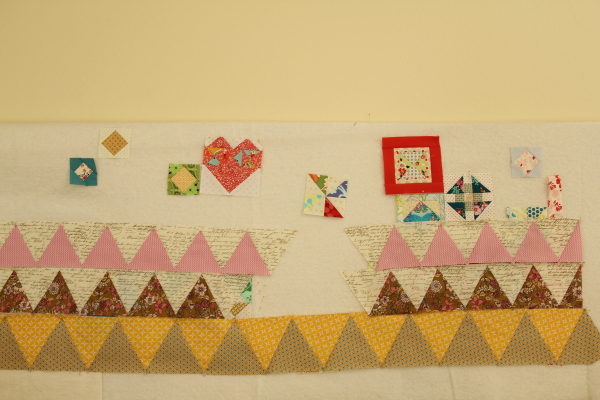 the other three rows are taking over the "gypsy wife" design wall. i'm just pinning right over the top of the gypsy lady like i do.

so, yeah, i jumped in a lot of different puddles last weekend. and it was a lot of fun. i'm motivated again and have not just one but four projects moving forward. i did also get an idea for two easy baby quilts that i would like to get done and off soon, but those will definitely wait until at least my son's quilt is done.

i do have at least that much self control!

linking up with lee's wip wednesday at freshly pieced
Posted by hydeeannsews at 1:34 PM