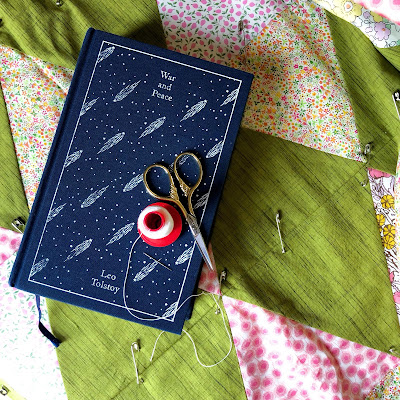 summer is in full swing. in fact, by some accounts, it's half over. not me; i've still got 2 months left before settling down to normal again. i didn't expect to have a chance to blog at all with everything we've got planned, but i find myself in a bit of a lull for the week, so here i am to report on "how i spent my summer (so far)."

in early june we had a nice beach vacation with extended family in the punta de mita/puerto vallarta area of mexico. i brought along two leisure options: a book and a quilt. seeing as the light beach reading i chose was war and peace, and the quilt needs a lot of handquilting, i have two very extensive projects to get me through the summer. my plans for the quilt are to handquilt along the inside of all the triangles, so it's going to be a lot more involved than my previous handquilting endeavors. i'm curious to see which takes longer: epic classic russian novel or miles of handquilting. 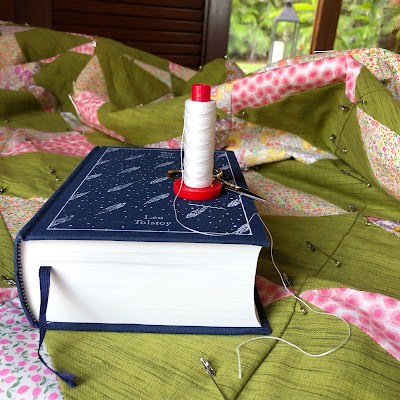 the book was mostly winning while in mexico. i got about 400 pgs in during the first few days. 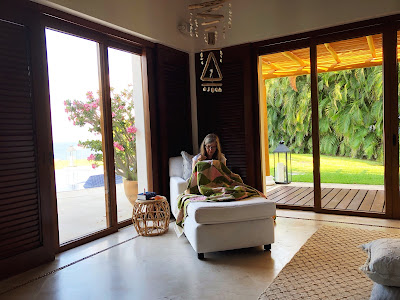 our room had a nice sunny corner with a comfy seat that i did occasionally quilt in when the light was good in the afternoons.and when i didn't feel like reading. but the book was definitely winning in mexico. 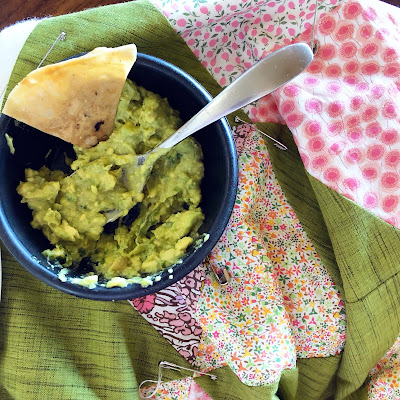 when i knew we'd be staying at a location that would be conducive to photographing quilts, i looked over my projects to see if i could complete one there and shoot in on the trip. but nothing seemed a good fit. so i just brought along "mildred and ethel" because it required no marking. i didn't want to lug along my quilting ruler and hera marker.

however, once we were in mexico and i was eating fresh guacamole and chips on the daily (almost every meal, actually), i realized "mildred and ethel" has a certain mexican vibe after all! i hadn't thought of the green crossweave fabric in terms of avocado yet, but it certainly is a wonderful 70's avocado green. yum. i might just get a craving every time i see the quilt from now on. 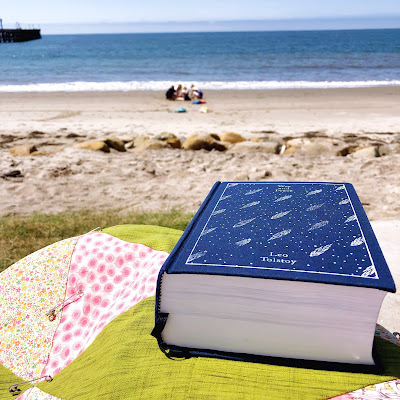 when mexico was over and done with, i got a few days at home before i was off further up the pacific coast to the santa barbara, ca area with a daughter and group of high school girls. once again i was on a beach with book and quilt to occupy me while i chaperoned the girls everywhere.

by this time i was 700 pgs in and only a few lines of quilting done. book still winning. 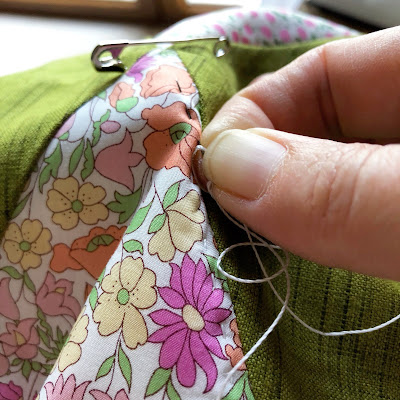 however, my mood shifted and i started getting a lot more quilting done in my spare moments. probably because i was having to stop and start a lot. it's easier to do with stitching than reading.

then i made a big mistake: i took the book with me to the pool one afternoon instead of the quilt. i say mistake because i found out a few days later that i had been in the same hotel as an online quilting friend, possibly at the pool at the same time, and we didn't discover it until a few days later. gina (party of eight) and i have been casual internet quilt friends for more than 5 years and randomly being in the same california town, much less the same hotel, never crossed my mind. but when i posted a photo from the hotel, she commented that she had been staying there the same day! it was like something from the twilight zone or something - too weird and crazy. what are the odds, right? we could have met up in person! and it also made me further wonder who i've crossed paths with elsewhere through out my life and never known it. life is weird.

anyway, i figured if i'd been walking around with a quilt instead of a book, a quilter might have approached me and then the story would be even better. 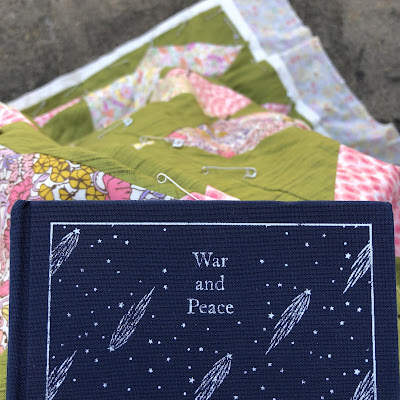 after santa barbara we went even further north to the monterey/salinas area to visit my husband's 86 yr old grandmother. grandma is as spry and active as ever. while we were with her, i actually worked on a different quilt (next post), but found some time for "mildred and ethel" when "groovy summer love letters" was completed. you can quilt while talking to your grandmother, but reading in that instance would be rude. 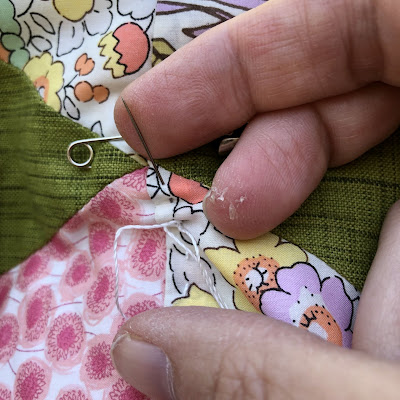 the quilt and my quilting callouses began making progress.

despite the fact that i have this callous, i find after a few hours of handwork, the end of the needle begins to push into my finger anyway. it just slides right in under the thick skin and pokes me! ouch. too bad i haven't found a thimble i like, but they're just not me. 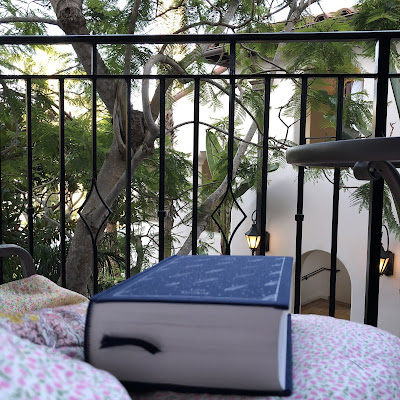 after visiting grandma, we made one more stop in santa barbara at a different hotel before flying home. i made sure that even when i was reading, the quilt was out and visible just in case some other quilter was around.

i do hope i finish the book by the end of summer.
i don't think the quilt will win.
not that i'm betting on either.

which would you pick?
Posted by hydeeannsews at 2:41 PM