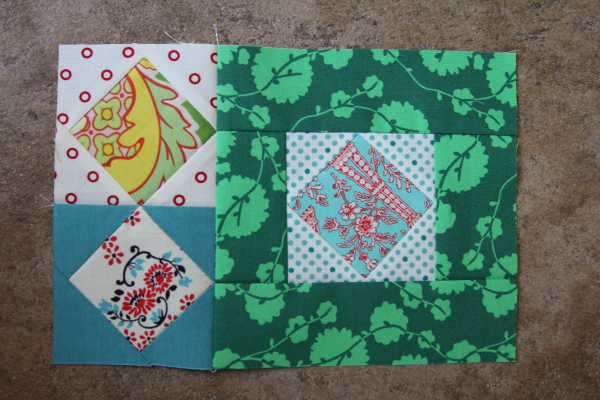 you know that saying, "why reinvent the wheel?," meaning, why redo what's already been done rather than use the resources already available? well, sometimes, you just have to because none of the wheels fit right.

all this is to say, i wasn't happy with the method for creating square-in-a-square blocks (sq-in-sq) that the gypsy wife quilt pattern book utilizes. the stitch-and-flip method of adding small corners onto a larger block made for a lot of waste, to my way of thinking. now, i do like scraps, but it was even more about getting my fussy cut center square right.

look at that bordered sq-in-sq on the right in the photo above. originally, i had a lovely square which contained a recognizable piece of the eiffel tower and a flower. the piece of the tower you can still see used to extend as far as the corners now do. but once i added the corners on and cut the excess off, it basically disappeared. for one, i forgot that the center square would end up "on point." so my tower was leaning. and second, adding the corners on, stitching and flipping to cut, took off nearly half my visible block rather than the standard 1/4" seam allowance on each side. with these little 3.5" blocks, that's a lot of visible fabric disappearing.

the pattern calls for you to cut a 3.5" square to begin with. once you add those corners, that center square shrinks not to 3", but to 2.125". that's pretty significant.

frustrated with my results, i decided to look for another method. the first thing i did was google "economy block tutorial" because economy block is the modern/common name for this block. or so i thought. in reality, though it is the base for the economy block, all the economy block tutorials i found had three layers of squares, not two, as this pattern calls for. it's a very small difference, but it meant none of the formulas or measurements out there (that i found) were helpful in getting the block i needed. hence, in my mind, "sq-in-sq" refers to a two layer block of simply one square in one square (needed here) and "economy block" refers to a third layer being added. there are some fantastic tutorials and formulas for getting any size economy block you want. if you're interested, try rita's at red pepper quilts for 5.5" econ blocks,  catbird quilts' tutorial with formulas and cheat sheet for various sizes, or sewing lab's beautifully illustrated tutorial for a couple of methods, including paper piecing.

all of these were great tutorials, but did not help me a lick to get the block i needed!

so i just did it myself. 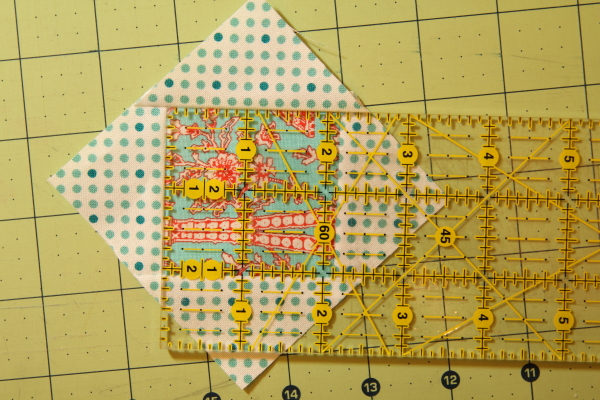 i started by measuring the finished center square to see how big it needed to be. it measures 2 1/8" . it needs a seam allowance, so add 1/2", which is a 1/4" for each side (which i did not do the first time, so my block was too small!). this gives you a measurement of 2 5/8". it's important that the center square be exact, because it has to end up with a 1/4" space between the points and the edge. otherwise, you'll either loose your points or have too much unwanted space.

and remember, this square will end up on point in the final block, so if you are fussy cutting, make sure you view it as a diamond sitting on it's points, rather than as a square sitting on one side. 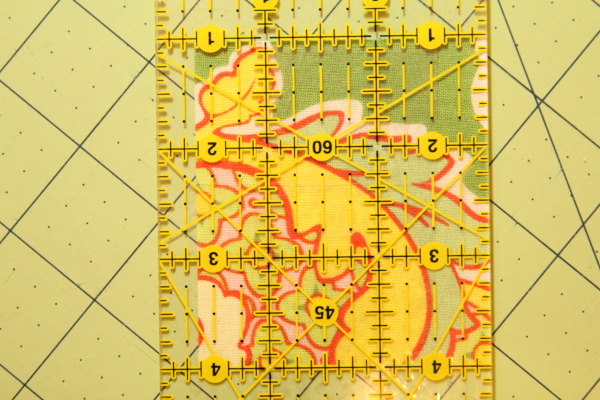 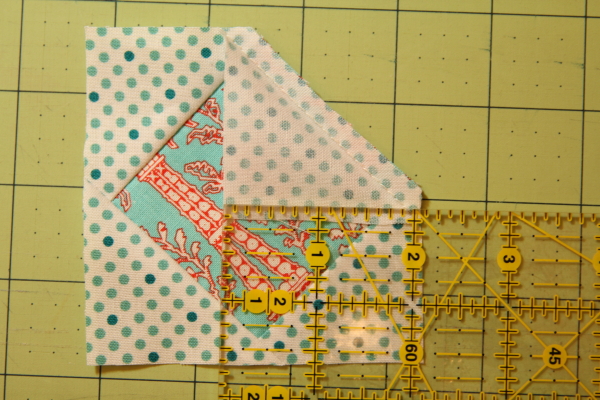 now for the corners.

in the pattern stitch-and-flip method, 4 - 2" squares are called for. again, half of each of those squares will be cut off as scraps. much better to make two larger squares that are cut on the diagonal into four triangles.

this is where some people might prefer the other, more scrap-producing, method. if you make triangles, you are going to be working with a bias edge for a few moments. i was once really scared of those stretchy bias edges. but not any more. really, they aren't so bad - i promise! like everyone says, just use a light touch and avoid stretching them. you'll be fine.

now back to the corners.

mine measured around 2" (what the pattern called for). but you have to take into account that you're going to be cutting them in half and each half will need some wiggle room. i didn't take this into account the first (or second) time i attempted the block. but the third time around i got it right. really, i should have visualized that the seam allowance extended out 1/4" past where that corner currently ended. then i would have known i needed to add another 1/4" to that. (2 1/4" + 1/4" = 2 1/2")

for corners, cut two 2 1/2" squares
then cut both on the diagonal to produce 4 triangles 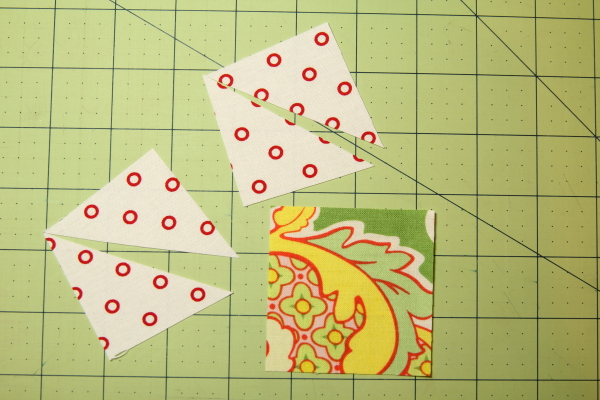 with everything cut, you are ready to assemble. 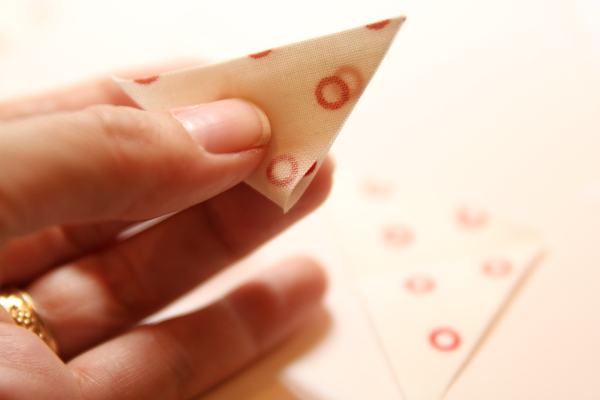 gently fold the triangle in half, lining up your corners and the bottom edge. then finger press to make a crease. fold your square in half and crease, likewise. 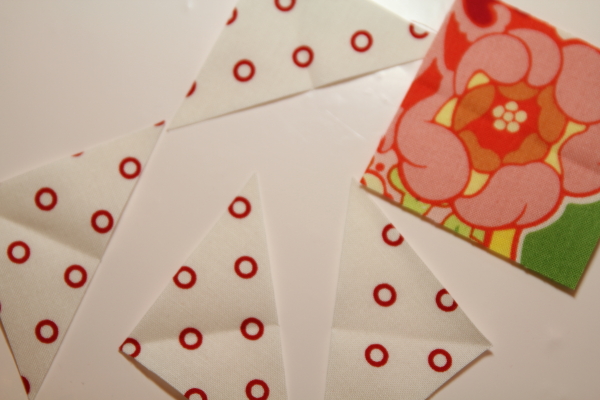 these crease marks will help you line up the square and triangles. (and my center square is different here because i photographed my first mis-measured attempt at the block. even though it came out the wrong size, the method is the same. no need to rephotograph.) 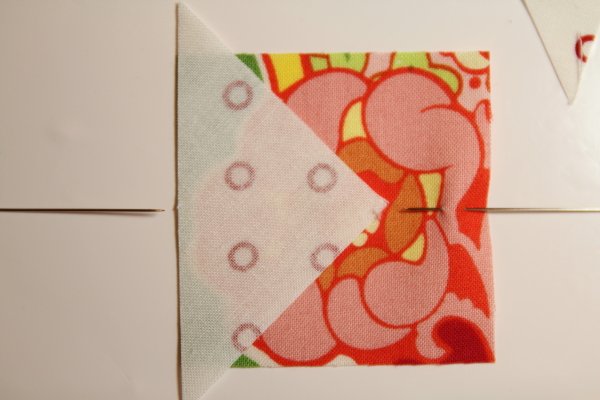 lay another triangle on the opposite side of the square, once again matching creases. you can kind of see how the triangle creases are in line here, too. 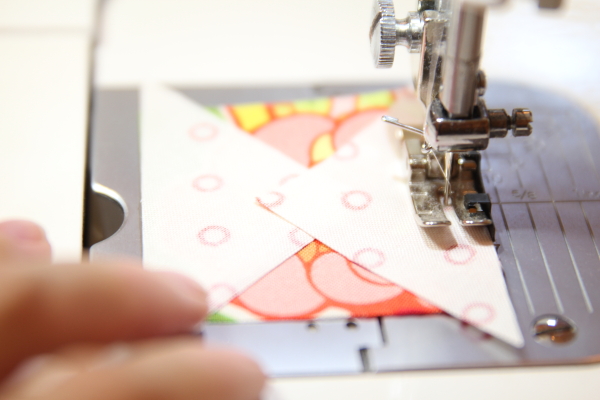 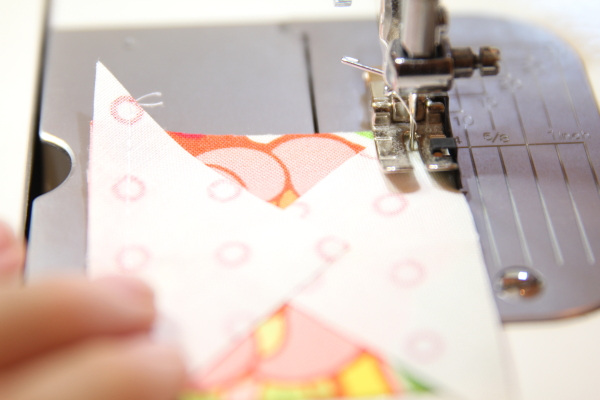 flip and sew the other seam at 1/4" also. really, a scant seam is best.

press those two corners open. these are small pieces and can be easily distorted, so handle with a bit of care. don't be afraid, just handle gently. 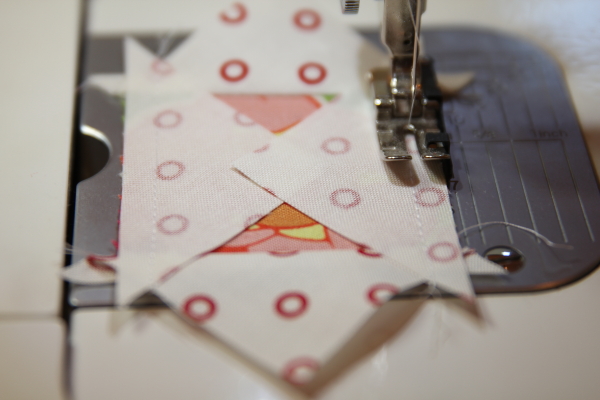 now you can crease the square in the middle the opposite direction and add the last two corners in the same manner you did the first two. 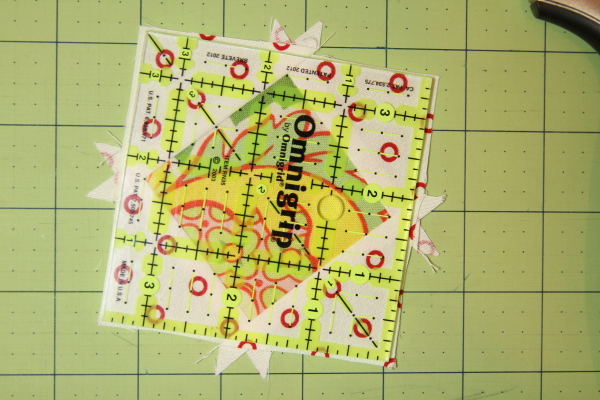 it's time to trim your pretty little sq-in-sq block to it's 3.5" unfinished size.

this is where i don't mind a little bit of trimming. the 2.5" squares we used for the corners provide just a tiny bit of wiggle room to give us more accuracy with trimming.

when you trim, line up the points of the center square with 1/4" marks of the ruler (see how there is a black dot at each of my corners?) and trim your square 1/4" away from those points. this will give you pretty, precise points on your block when you add it to the other quilt components surrounding it. 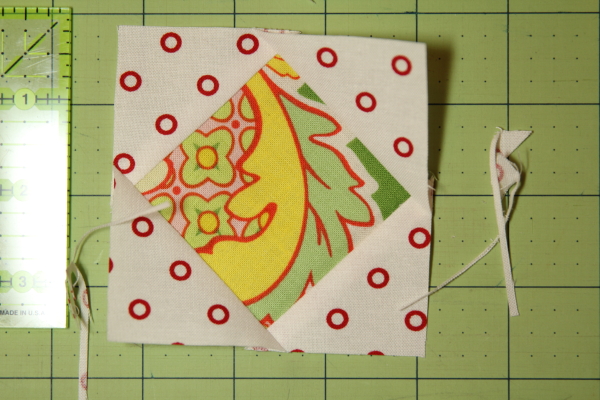 there you have a neat little 3.5" finished (3" finished/sewn in) sq-in-sq block.

it only took me 3 attempts and two bungled math problems to get it right. that's not too bad. i find when i make mistakes, it cements further in my mind the correct method and i'm much more likely to remember correctly the next time around because i don't want to repeat that again!

the pattern also calls for some 3" and 4.5" unfinished sq-in-sq blocks. i'll share the math for those once i've figured them out!
Posted by hydeeannsews at 10:49 AM