bandwidth - a simple yet large finish

i have reached the end of a series of finishes. the way i work, i usually start several things in succession and then they get finished close to each other, too. the beginning of this year i completed a couple of quilts that had been going for at least a year. this one - "bandwidth" - is the last of that group. i was supposed to take my younger son, s2, out for lunch and a photo shoot, but that just hasn't happened. i felt the need to get this post done since "bandwidth" was completed in january, so today i grabbed the only two children available in the last of the afternoon's light and we snapped some shots in the backyard. apparently our grass is growing in abundance. d3 and d4 had to stand on chairs to hold up this behemoth quilt as even on it's side it's too tall for them. their little arms just couldn't get it straight enough but that's okay - the wonkiness of the photo rather reflects the accuracy of the quilt stitching. if i remember correctly, "bandwidth" measures approximately 98" x 70", making this the largest quilt i've made to date; almost double the size of what i usually do. if i cut it in half i could have two throw quilts. i didn't exactly aim for this size. i simply cut up the blue i was using for the panels to what looked like a balanced size to the strip sections and this is what i ended up with. 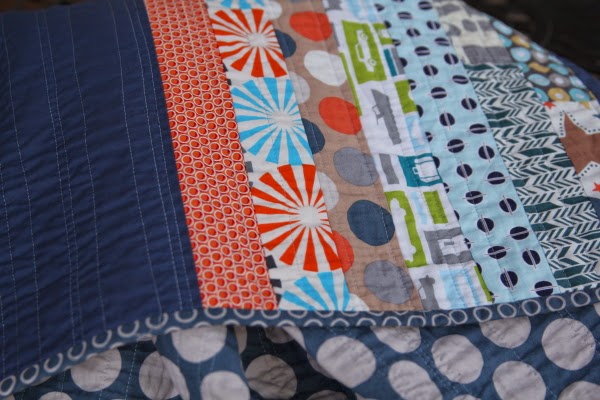 the front of the quilt is composed of three sections of jelly strips pieced together in rows running horizontally across the quilt, and four panels of solid blue (kona's windsor). my color scheme came from a jelly roll of riley blake's "superstar" fabrics i purchased for the strip sections. by the time i got around to making the quilt, i thought it would be better to use only some of the strips and incorporate coordinating colored prints. (the leftovers went into a baby quilt, "way out weston," for a new little cousin.)

technically, this is my own design, but it's hardly worth calling it a pattern. i sewed strips together and inserted panels. end of story! still, it makes for an effective, straightforward, modern design aesthetic that i am rather fond of.

i quilted in a randomly spaced straighline stitch, also on the horizontal, in a light blue aurufil 50 wt thread. i was going to use three thread colors, but decided that was too much work with all the thread changing. in the end, it was easier to just keep going in the same color. i don't know what possessed me to use such a light, high-contrast color on those dark blue panels because i had trouble with my straight lines being straight. they look fine from a distance and i think when i wash the quilt, the effect will be corrected even more. 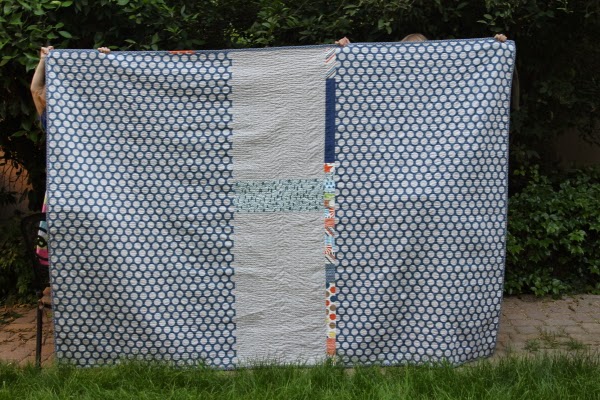 the back was pieced together from large cuts of two prints from the "superstar" collection and some leftover strip pieces. 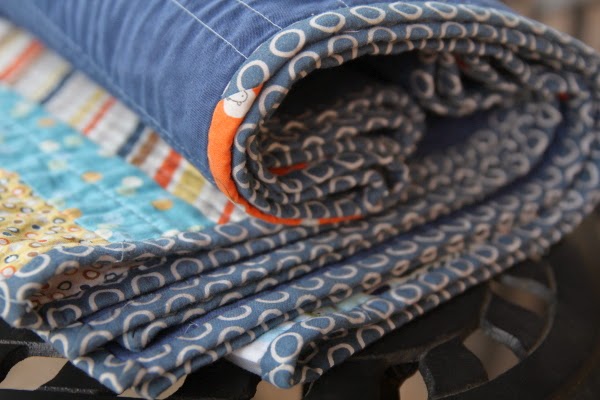 the binding gave me pause to consider the possibilities, but i finally decided to go with another coordinating print from "superstar" with one fun little accent piece of an orange "monsterz" print. i machine bound this one because it was going to need extra durability since it's for one of my boys. 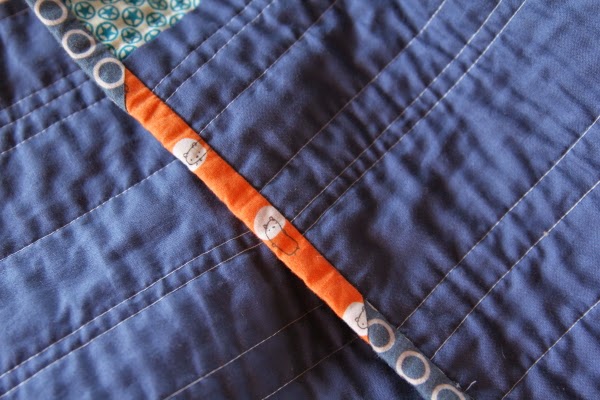 this "monsterz" print is probably my favorite from the whole quilt. i am also using it in s1's wonky coins quilt. i decided to add this bit in as i was attaching the binding. as soon as i put it in, i realized i should have sewn it on straight rather than on the bias, but it was already done. not a deal breaker, though.

now my little man can stop asking me when his quilt is going to be done! he's been snuggling and reading under it since the moment i finished it. 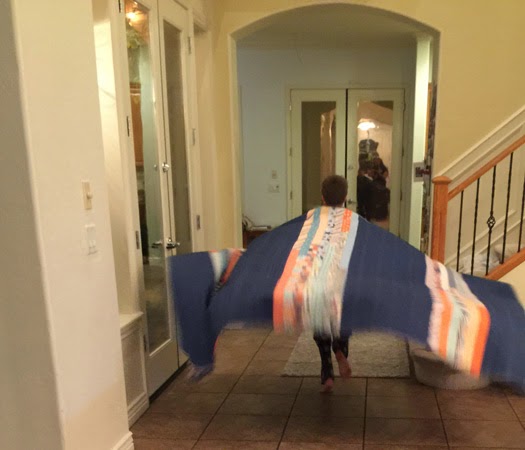 and using it as a superhero cape, too.

he obviously likes it and makes use of it daily, which makes this mama quite happy. now i just have one more mama-made to go and each child has one.

linking up with amanda jean's friday finishes at "crazy mom quilts."
Posted by hydeeannsews at 9:45 PM