at the moment and a serious dilemma

it's been a while since i've had a finish. i'm right in the middle of a couple of projects, some which are approaching the finish of phase 1 - piecing the top/making a flimsy. 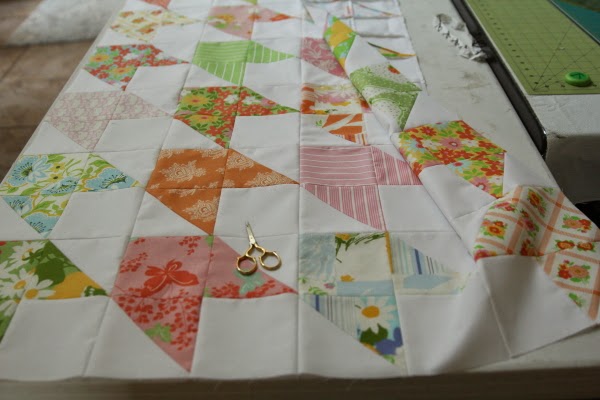 "dreaming easy" is getting it's rows pieced together. unfortunately, i sewed one of them on backwards last week so i'm at a standstill until i unpick the whole darn row. 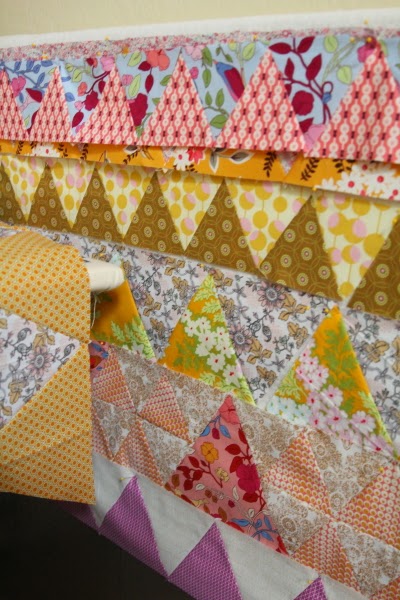 my triangle quilt, which really needs an official name, is developing a split personality. i find i have two types of rows: bold, bright colored ones (top and bottom) and gentler, softer rows with less contrast between the triangles used, like all the golden bits in between. i am either heading towards 2 separate quilts or two sides with slightly different colors because the bright ones are not blending too well, especially the one at the bottom of this photo. this fabric pull was a branch out for me and i'm learning about it as i go. i'm curious to see where i end up when all the experimenting and play is done. 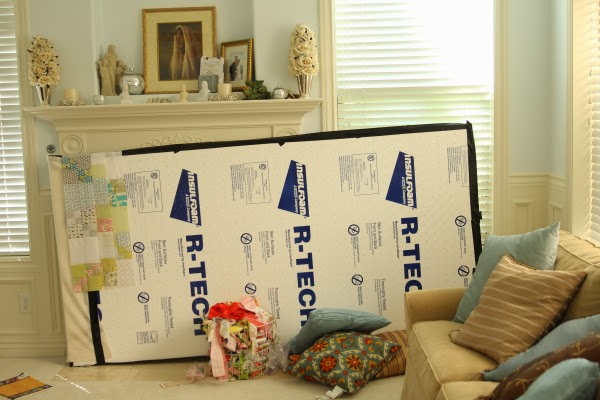 poor old penny patch 2.0 is begging to come out of the corner of shame. after i failed to realize i was sewing the directional prints all the wrong way, i stuck the design half wall containing the laid out blocks in my formal parlor, facing toward the wall to help preserve it from child-induced disasters or simple curiosity. this also greatly enhance the appearance of this "nice" room of the house, can't you tell? three months in the corner is long enough, so the other day i pulled it out to consider what needs to be done. 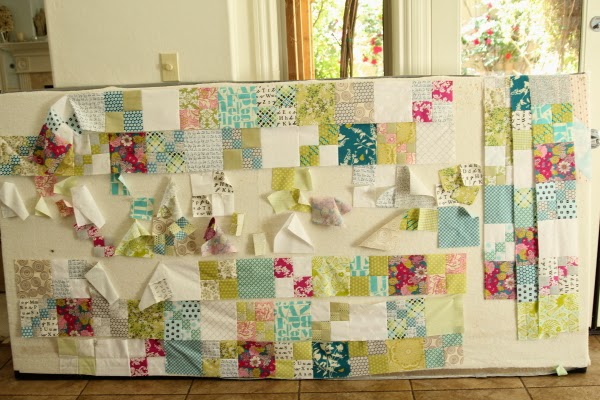 it wasn't looking too good on the other side of that design wall! i opted to remove all the blocks and just start over with the layout once i get all the new pieces cut. in the meantime, i put "dreaming easy" up on the wall since there wasn't any spare room for it anywhere else.

that's all that's in the works at the moment. 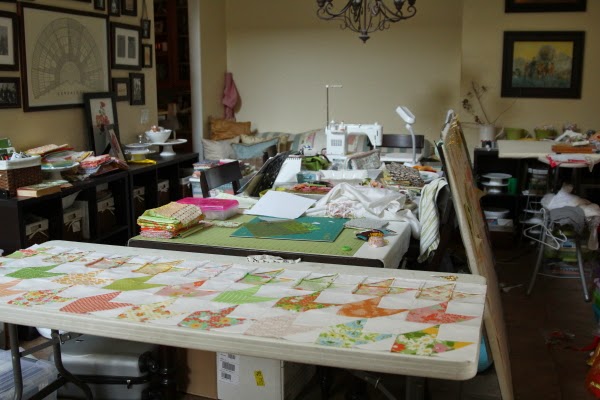 my dining sewing space is hardly recognizable as a dining room anymore and is not easily converted for use in it's original mode. in fact, it's overrun with sewing and looks terrible. this is one of the first spaces of our home you see when you enter the front door. it's simply not attractive. even when i clean it up, which i do regularly, after an hour or two of me working in here, it looks a mess again. not to mention that fabric and boxes "hiding" all over the place even when cleaned up doesn't look nice.

my poor husband has been pretty patient with the whole scenario, as much as he dislikes it. the other day he said to me, "we need to enclose this and fully convert it to a sewing room for you." on the one hand, i love that idea. the location in the house is just where i would like it to be if only i could close it off from view when wanted. being able to make this a more functional sewing space would be dreamy, too.

but then i loose my formal dining room, which i haven't really had for over a year anyway. i'm not using it as the dining room but the idea of forever giving up that option is hard to formalize. before the sewing came in i had this space almost exactly where i wanted it for a nice dining room. i like to use it for sunday dinners for our family, large family gatherings at holidays, and the occasional, rare entertaining spree. i've collected lots of white ceramic wares which are housed in this room. the genealogy wall, with our family tree fan chart and heirloom photos is also really special to me. i don't know where i would move these two collections. the 12 seat dining set is a whole other matter entirely.

in reality, this became a sewing space a long time ago and i should probably just give in. a set of sliding barn doors across the front will give me a space i can open or close as needed. then i can get to work making it a truly functional sewing space, which will also open up room in my bawthroom if i can bring all my stash down here.

i don't think i need to ask any sewing enthusiasts what they would do because that's pretty obvious.
oh, decisions, decisions!
Posted by hydeeannsews at 10:31 PM

Email ThisBlogThis!Share to TwitterShare to FacebookShare to Pinterest
Labels: my spot, wips