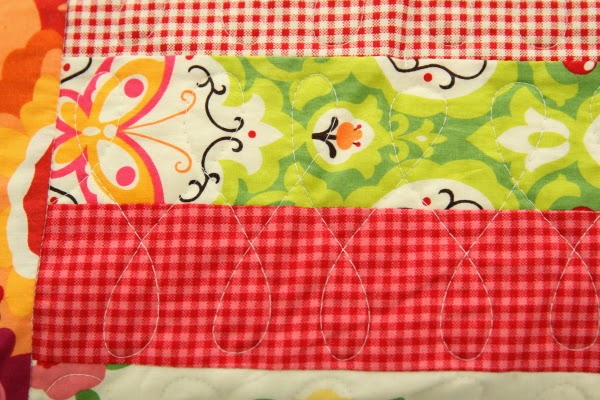 when it came time to quilt "bloom where you are planted" i decided to do modern loops, al a denyse schmidt style. i remember thinking when i had seen this done elsewhere before that i wasn't very partial to it. however, when i got one of her patterns, i immediately noticed some amazing texture in the quilting. "what is this amazing texture and what quilt pattern made it?," i thought. on closer examination i was surprised to find it was the modern loop pattern i had seen attributed to her. (see it here and here)  i have to say, done by denyse it looked much different than when i had seen it somewhere else. and my version of it here is going to look different, too, than denyse's masterful editions, partially because i didn't take the time to go back and look at her quilting before i did my own. true to fashion, i just sat down and started doing it without any real practice.

therefore, this quilt became a study in the different styles of the modern loop, aka "wishbone", quilting pattern. you can do it with the loops skinny or fat, narrow or wide, squat or elongated, circular or ovoid. really, there is a ton of room for interpretation here. i'm still deciding which way i like best. 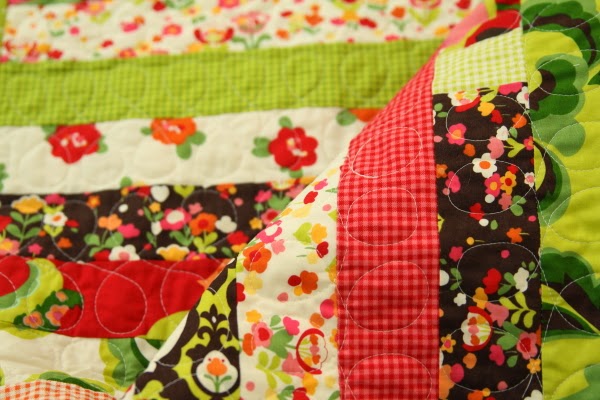 some of my loops appear more like circles because they are so fat and round. 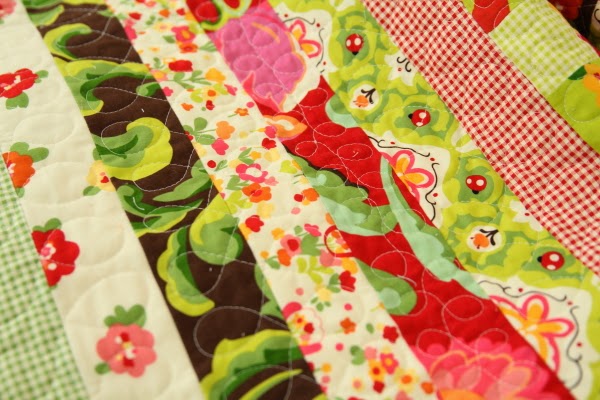 some of them are more vine-like, such as those in the red strip above, because they are so spaced out.

on the very first row, i was making loops across just one strip. before that row ended i decided to do the rest over two strips for two reasons: one, it would be a lot faster; two, having a center line to work off of would give me more reference points for making the loops, presumably aiding my consistency in shape and spacing. 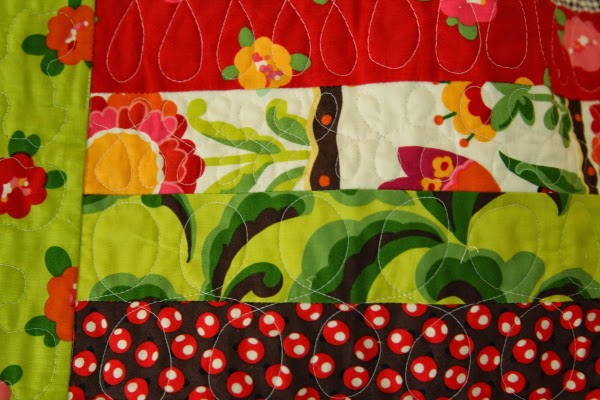 some are more teardrop shaped and others more like eggs.

i didn't intend to do more than one set of loops on a single strip, but found i had disrupted the flow of evenly spaced pairs, so i had to do two more single-row loops, which i randomly spaced out to the left and right of the first row. this gave a little more variety and interest to the quilting, as well. 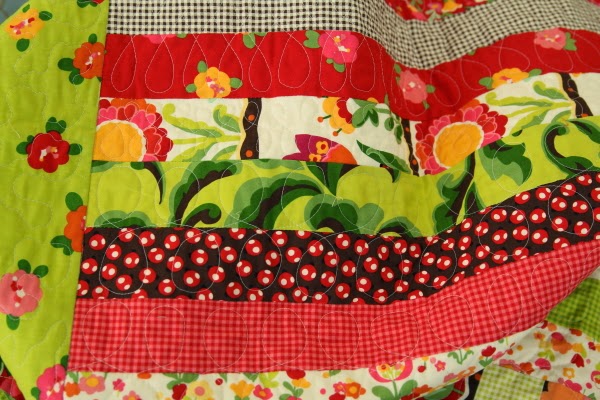 here you can see some of the variety i ended up with and how i chose to stipple-quilt the green accent strip across the middle of the quilt. 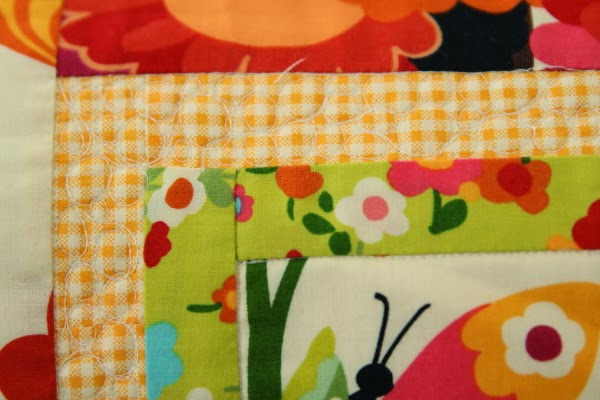 in the accent block, i outline quilted the layers and then bravely did a micro-pebble in the skinny gingham strip. i've only ever done pebbles once before, a few years ago, when i practiced them in a fmq class i took. i definitely need more practice or at the very least should have looked in a book to review the technique, but, nope, not my style! i just went at it and probably retraced my steps a lot more than necessary because of it. 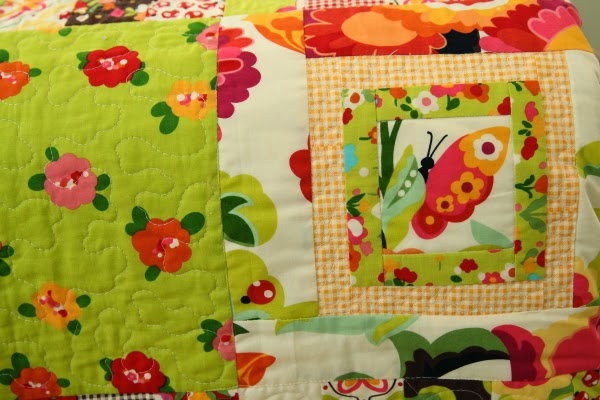 i considered tracing the butterfly in the center of the block, but wisely recognized the high likelyhood of my chances for error there and let it be.

i was quilting this baby on a deadline, which, after doing twice in the same month, in succession, i realize i never, ever want to do again. somehow it just sucks a lot of joy out of and inserts a lot of guilt into the process. but that said, i am glad i got both of them done in time for my intended deliveries. no regrets, just renewed determination to make well in advance.

i finished up the quilting late on a saturday night. sunday morning i threw the quilt in the washer. because of all the red, i put two color catchers in with it. that must have been a good idea since they came out pink. i chose to wash the quilt on the gentle cycle, extra water, with dreft baby detergent. i figured the dreft was good and gentle for babies, it would be nice to my quilt. there are probably even better detergents for washing quilts, but this is the gentlest thing i had on hand.

normally, i would lay out the quilt on my tile to air-dry overnight. however there was no time for that in this case. so into the drier it went, on low-heat, gentle cycle. when i opened the drier door less than an hour later, i got a thrill i've never had before. the crinkle on this quilt was so glorious, and the light scent of the dreft baby detergent smelled just like my newborns' clothing, coupled with pleasantly warm heat to make me burst with sensory joy. i ran to get the camera, wanting to capture the vision in the drier. unfortunately, there wasn't enough light to do it properly, so i moved the quilt to the family room in the sunlight. 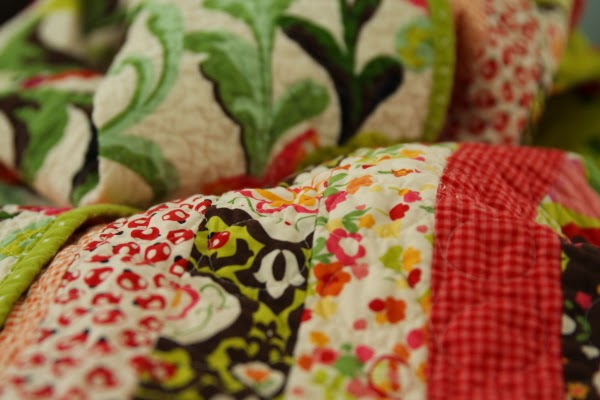 even with the aid of the sunlight, i don't think i really captured the texture very well. i've never had a quilt crinkle like this before so i just didn't know what all the fuss was about. but now i do! 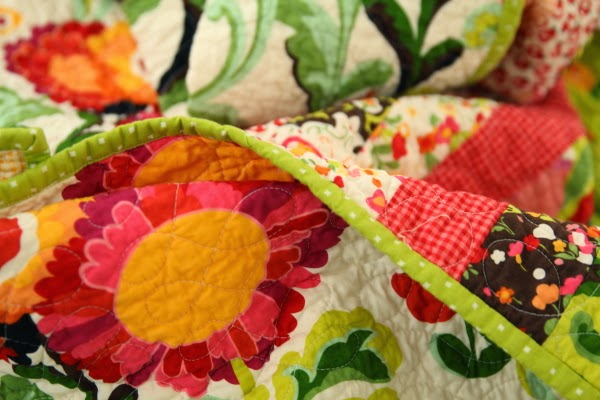 i couldn't stop touching it even though i was afraid of ruining the crinkle. 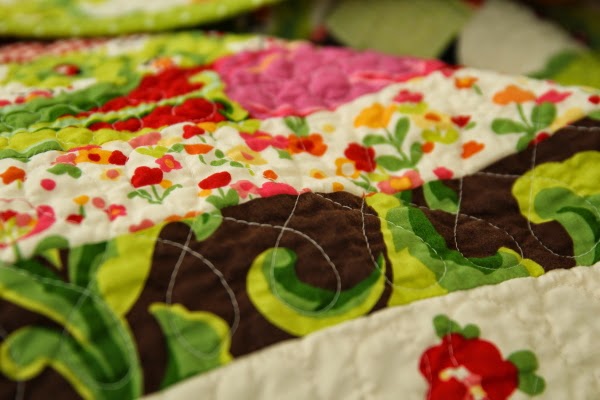 i thought this was definitely as happy as this quilt was going to make me.

but then i gave it to jill and her reaction topped everything. that'll be my next post. the crinkle deserved a whole post of it's own. 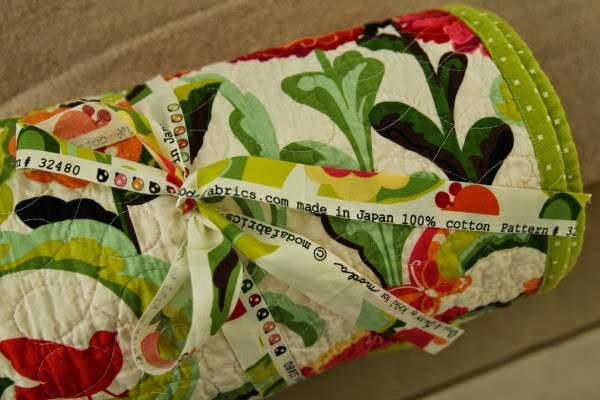 i wanted to use the darling selvage from this quilt in the backing very badly, like i did for "paris daydreams." but as you can see, it was printed right on the very edge of the fabric and would have been mostly eaten up in the seam allowance. so i opted to use those cute ladybugs and the print to tie up the quilt for gifting instead.

tune in again later this week to see it unwrapped.

linked up with lee's wip wednesday over at freshly pieced.
Posted by hydeeannsews at 5:00 AM