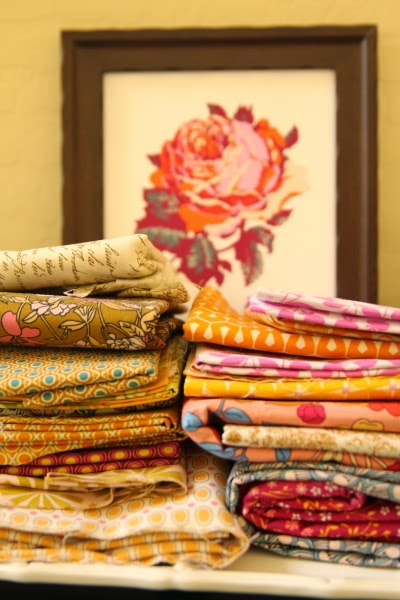 while i was plugging away at horrid straightline quilting on "bandwidth" all through october and into november, i kept eyeing this tempting pile of loveliness so fetchingly stacked in front of my AMH rose print atop a shelf in my sewing room. as much as i liked my colors in "bandwidth," orange and navy were getting old and quite boring. i longed for fresh, pretty colors the way one longs for spring in the dead of winter.

but i also really, really desperately want my kids to each have their mama-made quilt done and wrapped around them. so i kept at those not-so-straight lines. endlessly.

then one day the lines were done.

did i rush straight to this pile? that was my plan. but on the morning of my freedom i passed by my penny patch 2.0 pile, which was stuffed in a bag and set in my bawthroom sewing area months ago. sure enough, i cut into the penny patch pile that night instead of the triangle quilt stack.

but the next day, a blissful friday of nothing much but sewing, i alternated back and forth between the two projects. if i felt like triangles, i did triangles. if i wanted squares, penny patch it was. that afternoon i decided i didn't have enough room on my design half-wall, so i just up and made another one. 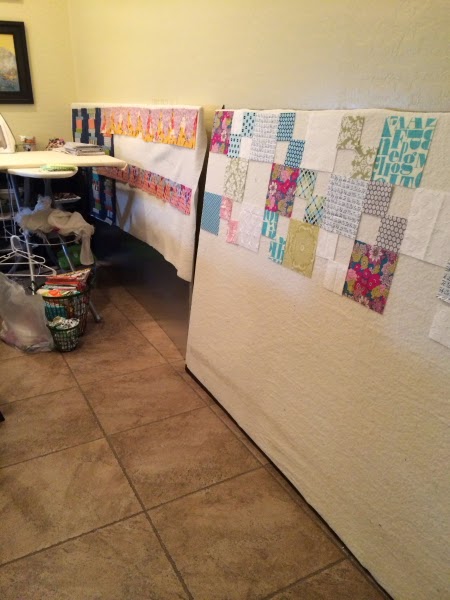 my current half-wall simply leans up against the room wall, so i figured it was easy enough to slide one behind the other when not in use. the excess batting on the first wall wasn't quite enough to cover the second wall fully, but it's functional for now and i am considering sewing together batting scraps to make up the difference. and someday, when i get my dedicated sewing room, i'll have one whole wall when i attach these two, one above the other. 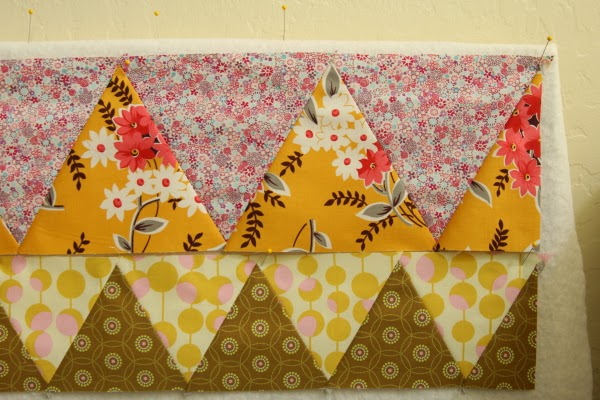 i got to sew most of saturday, not just that friday, which was a welcome treat after very little sewing time for most of the fall months. i managed to get two more rows of triangles together. the top row had me holding my breath a bit because the ditsy floral is a silky, somewhat slippery cotton lawn rather than a quilting weight. add the slippery lawn to a bias cut and there's plenty of potential for trouble. but so far so good! 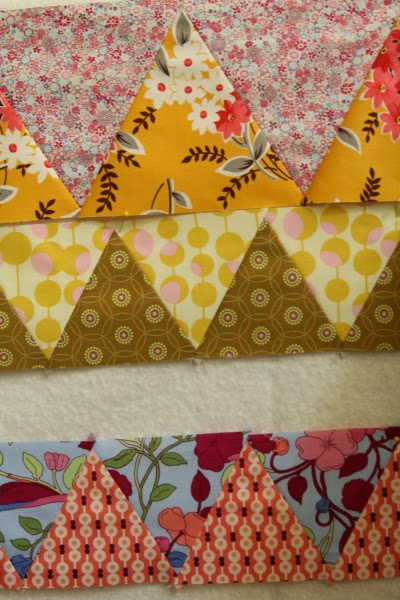 there are now three rows done and they are looking a bit clashy as is. i hope when i get the other rows in between them all will play nice together. if not, there's room for rejects on the back, right? this quilt will have such a different feel than rachel's original, but i am liking it thus far. she called her quilt "indian blanket." with the golden and rosey colors in this one and the warm, extended summer we've had around here, i think mine feels more like an "indian-summer blanket."

all this bliss sewing has been so refreshing. soon i'll have to get that "bandwidth" trimmed and bound. then the wonky stacked coins will need to be finished for s1. in the meantime, i'm going to keep my indian summer sewing of triangles and penny patch 2.0 inching forward whenever i need a break from orange and navy in boy prints.

linking up with lee's wip wednesday at freshly pieced.
Posted by hydeeannsews at 3:06 PM

Email ThisBlogThis!Share to TwitterShare to FacebookShare to Pinterest
Labels: my spot, triangles, wips