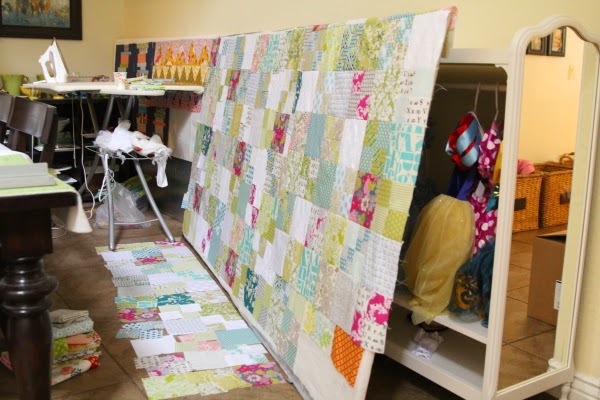 penny patch 2.0 is well underway. in fact, it's all on the board (and floor) awaiting piecing now. last week after i got the initial fabrics cut and started placing them up, i found myself feeling like there was something lacking. the colors just weren't balancing out the way i wanted. on examining rachel's original penny patch, one of the things i noticed about it that i like was the large amount of low-volume and white space in it with punches and sprinklings of her colors. even fabrics she was calling her "color" fabrics were mostly white with touches of the colors. this gave the quilt an overall light, airy feeling and helped the colors shine out. 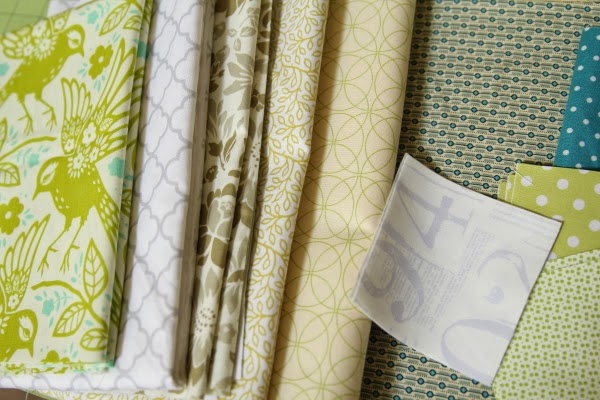 my first penny patch quilt turned out with a much more earthy, autumnal feel than i was originally going for because many of my fabrics were color saturated and/or on a cream background. so this time i intentionally went for as much white in my fabrics as i could get. but once on the board, i found myself craving a little more variety in prints and even more white space. so i went shopping, of course! i went to my local store for the first time in 6 months (more on that later) and got some additional fabrics to round out penny patch 2.0. not all are on a white base, but it added what i wanted. 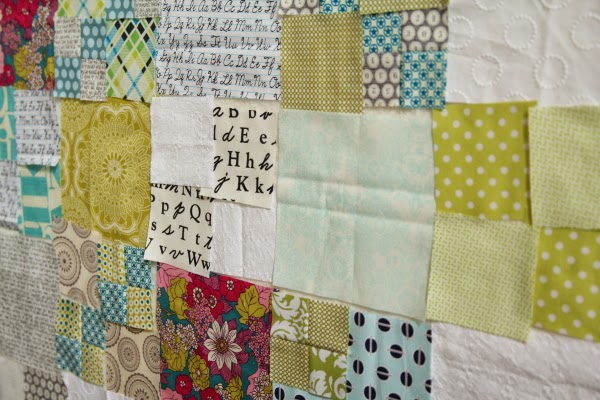 and a little of what i didn't want. that very light blue scrolly print front-and-center in this photo was too baby blue for me. so out it came. some of the new fabrics actually never made it in at all because i found i didn't need as many as i got. in fact, when all was said and done, i had a nice little pile of leftover squares.

now while all this was going on, i was also supposed to be making a baby quilt for my sister-in-law's shower. i'd already been through plan A, but couldn't find the fabrics i'd pulled, and moved on to plan B. however, i was second guessing that plan B and wavering toward replacing the fabrics for plan A. then i got the best idea yet - plan C: 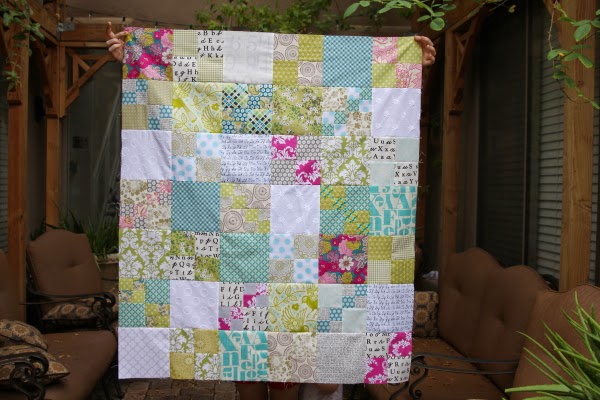 i simply used all the leftover squares from penny patch 2.0 and made a mini penny patch baby quilt. voila! it's a bit less white than my big penny patch will be because i left out the white eyelets in the smaller sizes since this is for a baby. now i just need to quilt and bind this little gal in the next two months before her owner arrives.

and get my own penny patch 2.0 pieced for myself.

linking up with lee's wip wednesday at freshly pieced
Posted by hydeeannsews at 5:13 AM