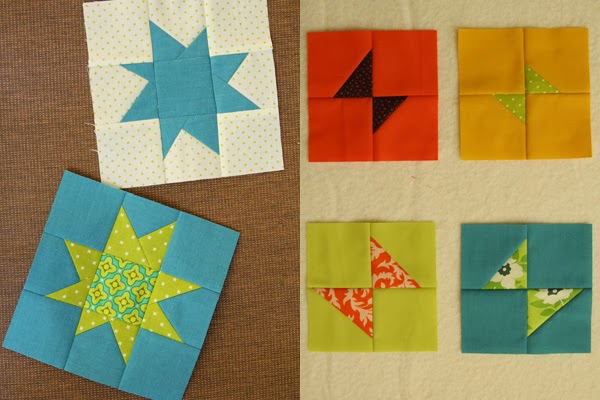 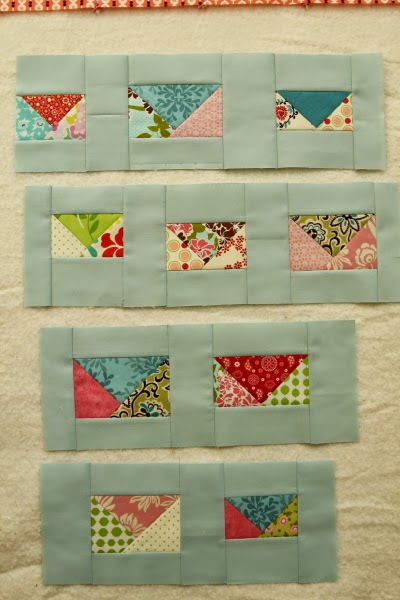 maybe you remember these quilt blocks i made several week ago to learn a few techniques during the online  ::angled:: class from rachel hauser at stiched in color? they were sent in to rachel so she could make a quilt to donate to a charity. originally, rachel was going to make one baby quilt from each style block if she got enough submissions. however, when i emailed her that i'd sent my blocks she said she hadn't got enough of each for individual quilts so she was probably going to combine some of them, maybe even put them all together in one big quilt. i'll have to admit that when she told me this, i was highly skeptical that would work at all based on the block assortment i had sent her alone. i could not see how my blocks would work together, much less how she could mix in whatever else she received.

but that's why rachel is a quilt master and teacher, and i'm not. just look what she did:

i absolutely adore this quilt! it has a homey, vintage feel - like maybe it was found in someone's grandma's attic or buried in a chest of heirlooms somewhere. at the same time, it has a very modern aesthetic to it, too. i think putting together such a wide assortment of blocks from several quilters lends to the scrappy, make-do vintage feel it has, as well as the black-and-white ticking stripe sashing she used.  some of the block styles, the colors, and various fabrics give it it's modern side. i'm posivitely stunned by what she made out of these blocks. never in a million years could i have dreamed this up. rachel is simply magic. 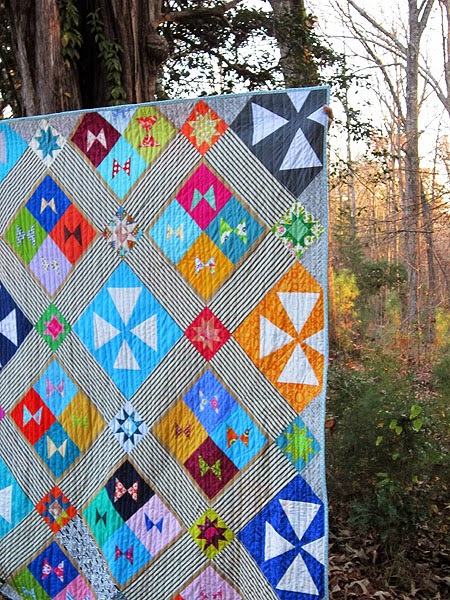 i can see my two wonky star blocks and four butterfly blocks in this photo. play a little "eye spy" if you want to find them. here's a hint: none of them are touching each other but they are either lined up or in the same position as their mates. 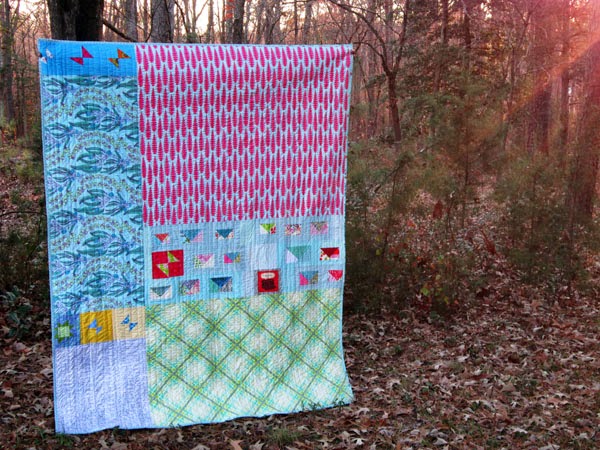 the envelope blocks, which i might have been the only person besides rachel to make, went on the back of the quilt, which is a softer, sweeter layout than the bold front. but it still has plenty of color and punch to it! 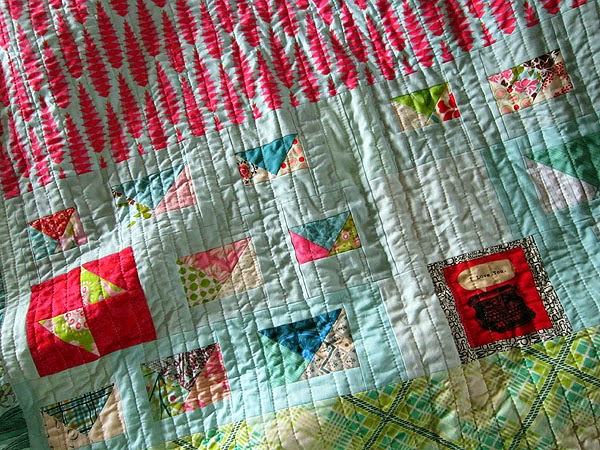 i really love how she threw in the typewriter block among all the envelopes. that coupled with a text print she put in the lower left corner turns the back into a writing themed spread. i like to think of them as notes of love and encouragement to the recipient of this quilt from those who contributed to it's making. it's so fun how both sides of this quilt have a strong and unique personality. because there were so many blocks put together, this turned into a generous throw sized quilt that will be going to a women's shelter. i hope the mother who gets this feels wrapped in the love of ladies who cared enough about her and her situation to make something warm and comforting even though they didn't know her personally. the whole time i was working on these blocks i thought of how they would be for someone in need and although i didn't know who they were, their story or situation, i knew they needed love and that God knew who they were even if i didn't. He'd see the quilt got to the right place. my part was just to make pieces of it and send them out.

again, i am so grateful to rachel for not only offering an excellent class but for giving the students a chance to put their budding skills to good use to bless the life of someone who could use a quilt.

Posted by hydeeannsews at 2:38 PM