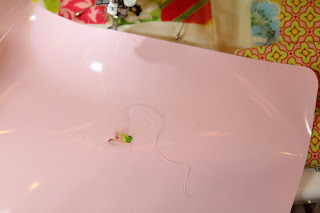 this photo from a post last week generated some interest, so i'm here to explain today.

in the not-so-busy times of the year, fall and spring, my friend jill comes over to sew on friday mornings. the mr. takes our youngest children to the zoo for the morning or day, the older children work on their own school or craft projects, and we sew.

jill and i took a beginning quilt class together in april 2011. neither of us has finished those quilts, but we are very, very close now. this week we thought we would be able to finally complete the quilting on our respective quilts. we were especially anxious to do this so we could do the handbinding during our general conference listening over the weekend. (we've had that goal the last two conferences. *sigh*)

alas, it was not to be! i sat down to work on my stippling of "taite":  i found my starting point, got my thread to the top, put my gloves on, and took off. for some reason, however, the quilt just wasn't sliding or moving around at all. i stopped to make sure my supreme slider (mat designed to allow the qulit to move in all directions easily during fmq) was in place. i saw the corner of it under my quilt, so i tried again. still no sliding. urgh! i figured the threads were making a big nasty snag and i'd just have to start again. wrong! 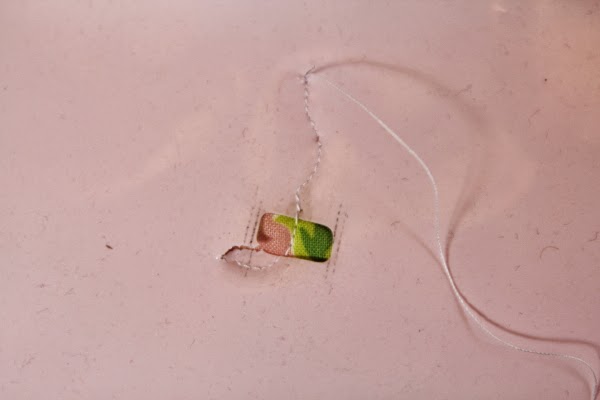 what i actually found was much worse. my slider had done the sliding instead of the quilt and was now sewn to the quilt! and the tugging i did to get it out of the machine had ripped the slider, too. i was aghast. when i got my slider out to begin the fmq on this quilt a week earlier, i'd noticed it had some lint on the grippy side, but since it was still staying put, i didn't think much of it. apparently i should have paid more attention and done some maintenance.

i carefully took the stitches out of the slider. fortunately, it didn't rip where there stitches were. i then took the slider to the sink for a rinse. that lint washed off in about 1.5 seconds, pretty much as soon as the water hit it. with a bit of shaking, it was dry enough to use almost immediately. an ounce of prevention would definitely have been worthwhile here. i was impressed with how tacky the slider was after rinsing. i could barely get it in place because it stuck to the machine table the instant it touched it anywhere.

jill and i had a good laugh over the incident. i told her it seems like no matter how hard i try, i always flub up somewhere, somehow. in the beginning, i was always forgetting to adjust settings whenever i switched feet or tasks. in fact, when i started the fmq on "taite", i knew i usually forgot something and took extra care to make sure i'd changed all settings after putting the walking foot on. (did you smart people catch that?) however, despite having changed the stitch length to zero, dropping the feed dogs, and putting my slider in place, it just wouldn't slide around the way it's supposed to. after about 3 attempts i suddenly realized i'd put the wrong foot on! since the last quilting i'd done was straight line, i was thinking "quilting = walking foot" when fmq actually requires a fmq or darning foot. oh, when will i ever get it right!

jill laughed with me about this too. i told her i call these gaffs "home ec moments" because they are the kind of mistakes you'd make as a beginner in home ec.  a few minutes later, jill had a home ec moment of her own. she stopped to check how the back was looking and could not figure out what was going on. it looked as if her threads weren't aligned somehow. 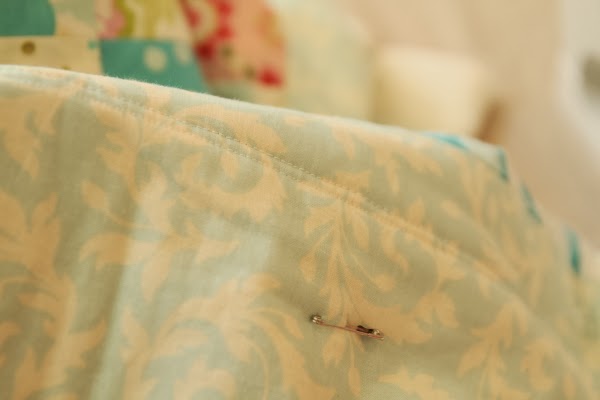 on the back, there were two rows of stitches, less than a quarter inch apart, which should have been overlapping. how on earth had the machine done this? 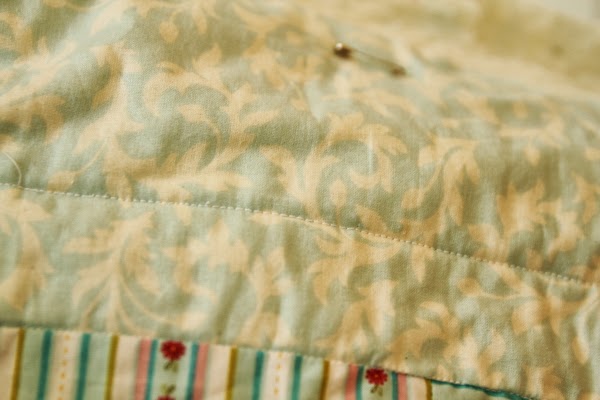 when we looked at the front side, there was only one line, as there should have been. it was completely bizarre. i know how you can have misalignment when hand stitching because the needle doesn't enter and exit the same place, but this seems impossible to happen on a machine. she kept flipping it back and forth from each side, trying to find the source of the problem. as we sat there puzzling over the issue, jill suddenly realized the cause - she was sewing through two sides of the quilt, which she'd accidentally folded when putting it  in the machine. 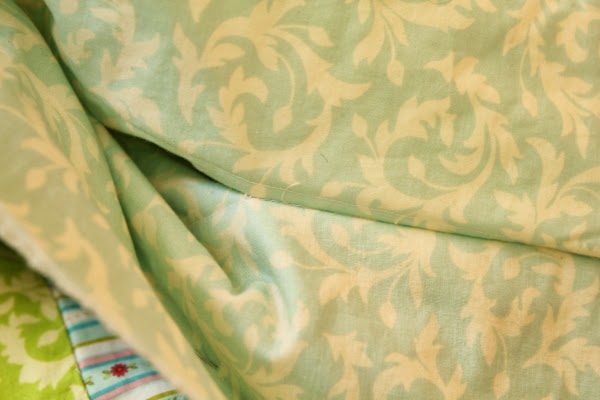 the batting is so thin that she didn't realize just by feel that the quilt was doubled. you can bet we laughed over this one, too! it wasn't friday the 13th or anything, but we were feeling unlucky in our sewing attempts for the day. jill was a good sport and let me photograph her home ec moment, too. they do make for fun posts.

apparently home ec moments aren't just for beginners. wish us better luck next week after fall break when we get back to sewing on friday mornings again!
Posted by hydeeannsews at 1:19 PM