photography or quilting = happy me

i hesitate to post this today because 1) my photos are solid, but not the best by a long shot, 2) my people and life photography are better than my sewing photography, 3) i didn't have time to take the photos i would have liked to to go along with the post or to write it as well as i'd prefer. but here's what I've got to share. i hope it helps someone somewhere.

i have been a hobby photographer for about 15 years. i got my first slr camera in 2000 and made the switch to digital in 2008. this was later than most because i wasn't satisfied with the quality of digital til that time. currently, I shoot with a canon 60d, usually with my 2.8/24-70mm zoom lens. i've read dozens of books, taken some real-time workshops from professionals and at least two online courses, too. i've also taught basic photography classes to mom groups a few times. 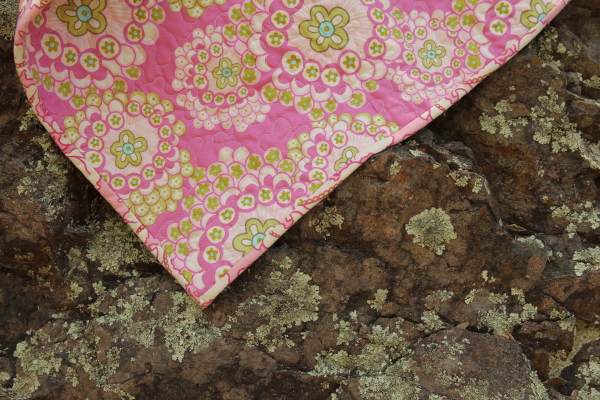 in order to not bore with a bunch of words, this post will be interspersed with photos i took recently on our big road trip as well as fabric and sewing shots. warning: it's a big post.

although i shoot daily and have done infant portraits and a few family sessions (as well as one engagement shoot - yikes!), i am NOT a professional photographer. in fact, being asked to do photography for others makes me super nervous! i just really like learning about photography and making the best photos i can in-camera at the time i take them. capturing my world and experiences makes me happy.

i'm a homeschooling mom of 7 who also likes to read, scrapbook, and quilt. i do NOT want to spend my time editing photos. therefore, i do my best to shoot well-lit and cropped photos when i take them. and i live with what i get. an imperfect photo often captures enough of what i want to some degree. i'm okay with that.

the opening photo in this post was taken by my friend's daughter while i was consulting with jen about the shots i got of her and her husband. jen, a college roommate and my bestest old friend, talked me into doing a last-minute family session for her while visiting them in Washington state this summer. her idea, NOT mine! 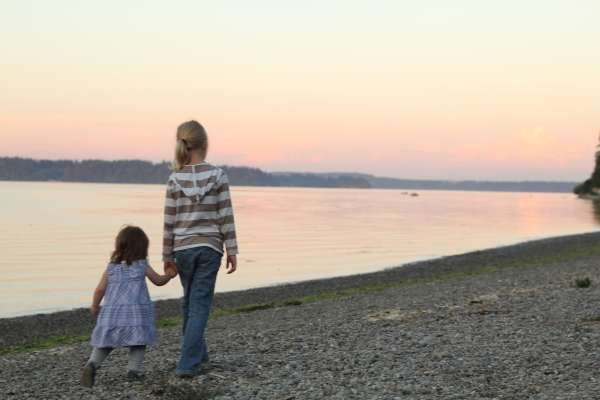 this is a photo i took of two of my girls after that shoot on the beautiful Puget Sound. it's a tiny bit dark, but good enough for me, especially since i was able to capture the colors in the sunset sky by adjusting my white balance! that's a feature I've been messing with the last few months and i am happy with the improvements mastering it is bringing.


i learned how to shoot in manual mode a few years back and am fairly competent in it. i definitely understand the workings and interplay of iso, aperture, and shutter speed. however, i find that shooting candids of children/moving targets does not usually allow for time to work in manual. so most often i shoot in P (program), which is sort of like auto but allows me to make adjustments.

my go-to adjustment is the exposure compensation. i use it to quickly bump up or down the amount of light coming in the camera's auto settings. this works quite well for me most of the time. if i'm not happy with what i'm getting that way, then i go manual. 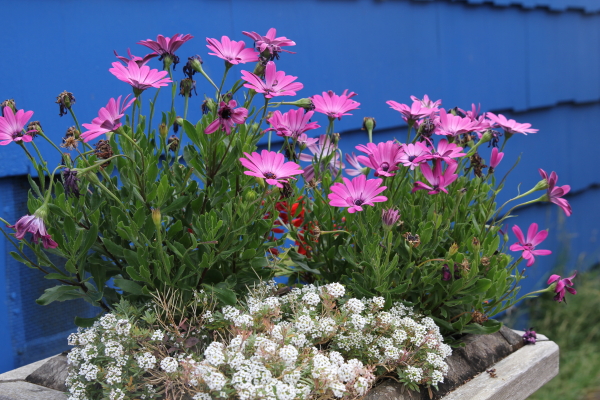 when i started blogging about my sewing and began shooting more things rather than people, i quickly realized my product photography needs help! i keep my eyes peeled and take note of other sewers photographs and look at styling in craft books for ideas on how to improve.

i know my photos are not the best out there. however, i'm satisfied with the quality of them and that's what's important. like i said, i'm happy with imperfect photos and i'll post them if they're all i have. but there are three basic things i learned a long time ago that can improve any photography with any camera tremendously. i'll share those today and maybe some more complicated tips another day.

1. shoot your subject and leave out the rest

most untrained people, when handed a camera, will center their subject in the frame and leave as much room around it as possible. you don't want to cut anyones head off - i get it. (my grandfather was 6'4", that happened to him a lot in group photos.) but what that can do is give you a shot like this: 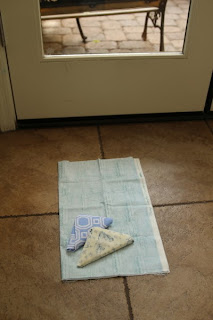 when what you wanted and were thinking of when you took the photo was this: 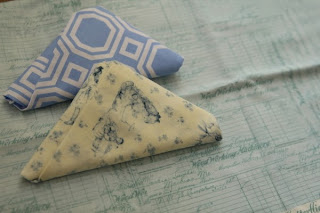 so think about what you want to photograph, the story this photo is to tell, and then include only that in your photo. in my sample photos, the story i wanted to tell was "fabric i got at a certain shop." the top photo is "some fabric i bought, my tile floor, my courtyard door." the second photo captures much more closely what i was trying to show.

get in close. fill your frame with your subject as much as possible. maybe even cut off a bit of it. 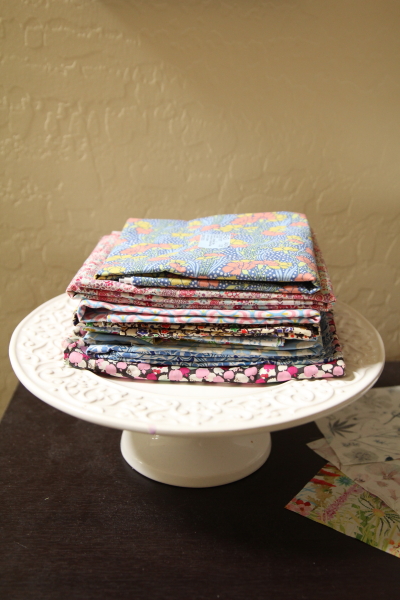 in this photo, i put my fabric pile on a plate for styling, but to include the entire plate, i had to include a lot of wall space and dusty cabinet top also. not a very effective photo. 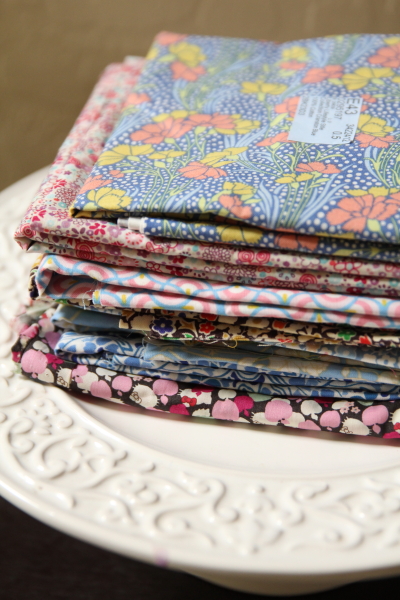 this zoomed in photo still includes some of the pretty plate for styling purposes, but cuts off part of the plate and even the fabric, which showcases the fabric even better.

now if you want an atmospheric shot and the setting is part of the story you are trying to tell, then include the entire setting in your photo. but if not, then zoom in on your subject and leave the setting out.

case in point - the top photo of the fabric on my floor in front of the door was actually taken to show where i was shooting so as to demonstrate shooting in natural light. that's the story that photo tells. but i didn't include the whole hallway or entire door, just enough to give you the idea.

zoom in close. then closer still.
don't forget that sometimes the zoom is you not just your lens. move yourself. 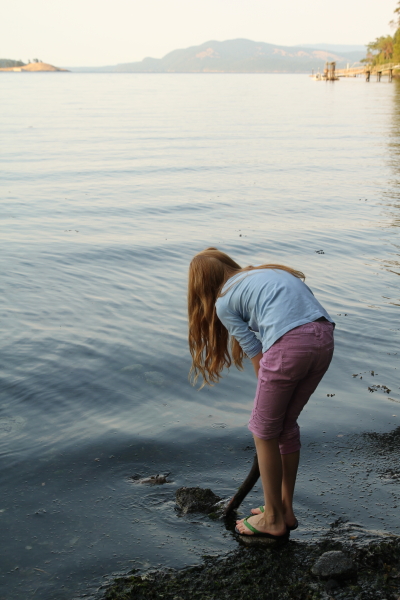 this photo tells the story of my daughter playing in the water in the bay.

and the second photo captures a detail of the story i wanted to tell. maybe you can see the seaweed in the top photo, maybe not. i made sure to get a shot of both parts of the story. 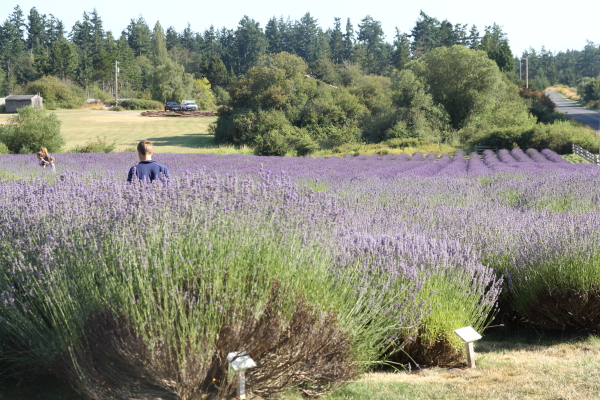 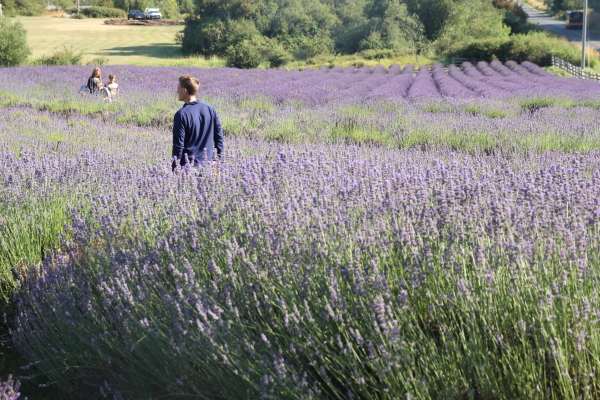 i've been known to lay on the sidewalk or climb on a fence to change my angle when taking photos. walk around, move yourself, try out different sides, get higher or lower. by playing around with perspective you can change your photos dramatically. and often you can crop out background distractions by moving yourself rather than your subject, which isn't always possible.

here are two photos that are not at all great, either one of them, but one is much better than the other just because it's oriented differently.
standing directly over your subject, on a chair if necessary, can really help give you a flatter photo. it sure would help with the strangely angled one we all get of our quilts on the floor sometimes. (I've posted plenty of those - see above.)

i already mentioned this, but it deserves it's own place in the list. if you're playing with cropping and angles, you are naturally going to shoot more. but i'm saying it again to be clear.

in the days of film photography, you had to shoot blindly and hope it was working out. film and development cost $$$. digital doesn't work that way! you get to see (mostly) how your shots are coming out and you can erase what you don't like. memory cards are super cheap compared to film and can be reused many times. the storage capacity on them these days is enormous.

sometimes the first photo of the 6 or more identical shots i took works the best, but usually not. and if you're photographing people, the more you have in the group, the more you need to shoot to increase your odds of that one great shot.

you also have to learn how to use that trash can button a lot so you don't end up with photos you don't need clogging your storage. be ruthless! take a lot, then get rid of what doesn't work or isn't the best.

4. turn off that flash & learn to use natural light!

this is an entire subject unto itself, beyond the scope of my post. but after you've started playing with the above 3 tips, it's going to make night-and-day difference in your photos. there are limitless resources dealing with this subject. look it up and figure it out. you won't regret it.

this post was inspired by beth's new photography workshop link up at plum and june.
Posted by hydeeannsews at 8:00 AM

Email ThisBlogThis!Share to TwitterShare to FacebookShare to Pinterest
Labels: photography