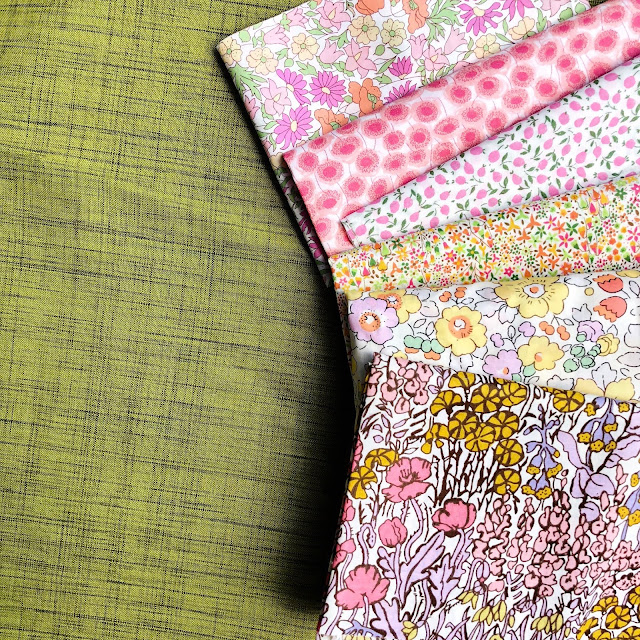 The last time I was ordering crossweaves for some more Liberty + crossweave quilts, I saw an olive green crossweave that I thought might be nice to try for a change away from my neutral neutrals. (I think you can use certain colors as a “neutral” for a background, like in nature - blues, like sky, and greens, like foliage, in particular.) I was ordering from my phone and the thumbnail photo of the green crossweave had a sort of grunge/crosshatched look to it that all my other crossweaves and chambrays did not. I figured it must just be something about the way the colors photographed. Well, it came and it looked precisely like the photo did!

I was really confused. The look and texture were completely different from all the other crossweaves I had ever seen, and not in a way that pleased me. I’ve lookked about a bit on the internet and apparently Moda makes two sorts of crossweaves. Now I know. This one is more like a barkcloth, similar to the Outback Wife fabrics I have. I really didn’t like it at first and didn’t know what I was going to do with it.

But since it has such a retro look and feel to it, I decided maybe I could pair it with some other retro-ugly fabrics I have and it might actually make something I could love to hate. With more projects on my plate and in my head than I can ever complete, I don’t know why I even gave this a thought. But I scrounged through my Liberty stash for those prints I don’t like and also pulled some I do like that matched and came up with something kinda funky and vintage and likable. 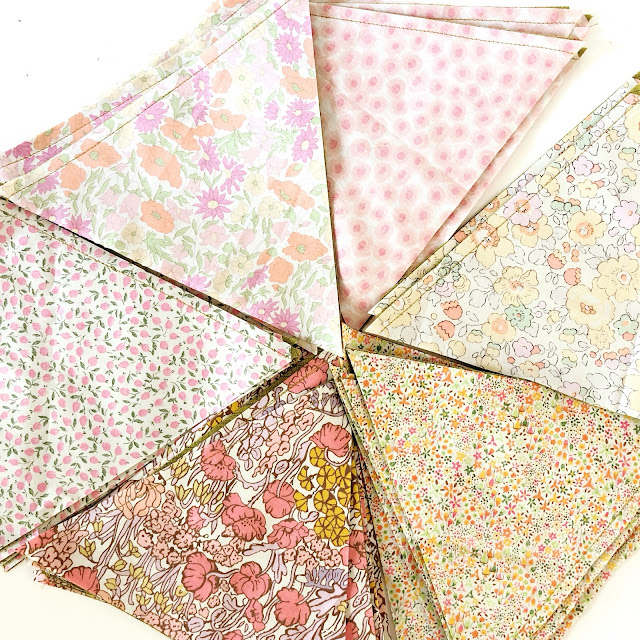 There are six Liberty prints here that speak a certain vibe to me which pairs with the grungy crossweave. Three of them are prints that I was never going to use anywhere else, so I figured it was worth a shot to use them now. The other three I do like but I’ve used them before so the leftovers were expendable. So despite the fact that I have oodles to work on already, I cut into this stack of funkiness and made some triangles. All my other Liberty + crossweave quilts are random bricks and strips patterns, but something about this pull was saying triangles and diamonds to me. 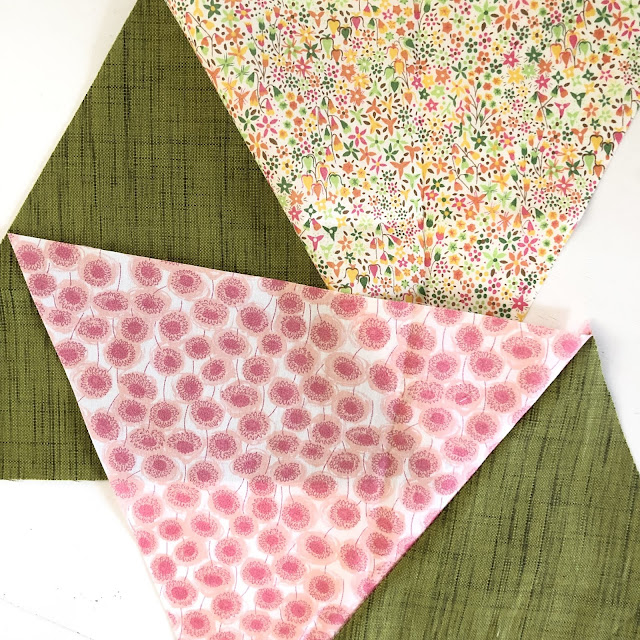 These are two of the prints I wanted to use up, so I cut as many of them as I could from my yardage. They will both feature twice as often in the quilt as the others will. 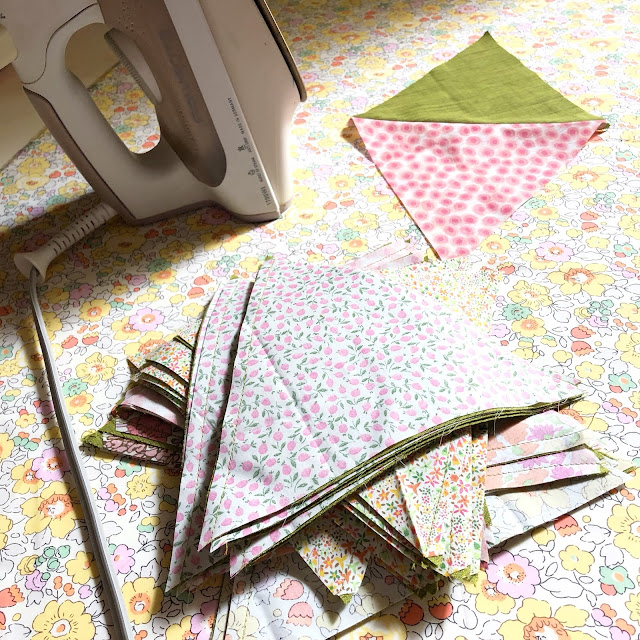 I'm using up the bulk of this Betsey in yellow for half the backing and on the front. 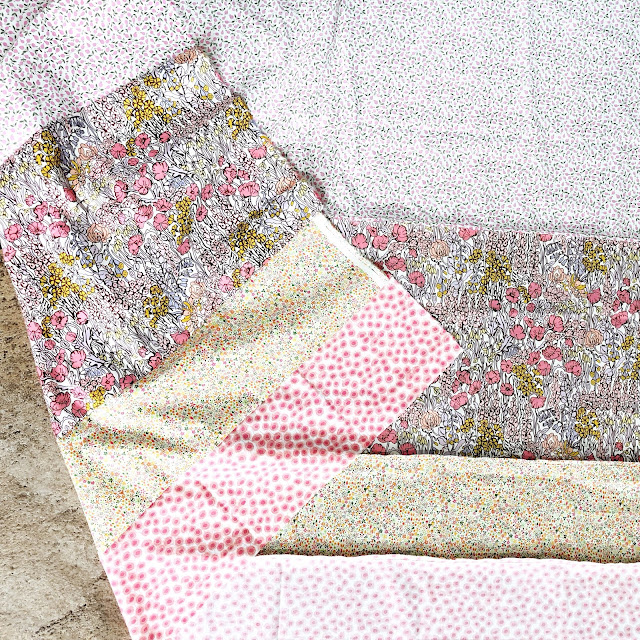 The backing is also a departure from my previous Liberty church quilt "score" I was working from. I didn't want any of those "ugly" prints left, so I worked what was left from cutting triangles into strips for the backing. 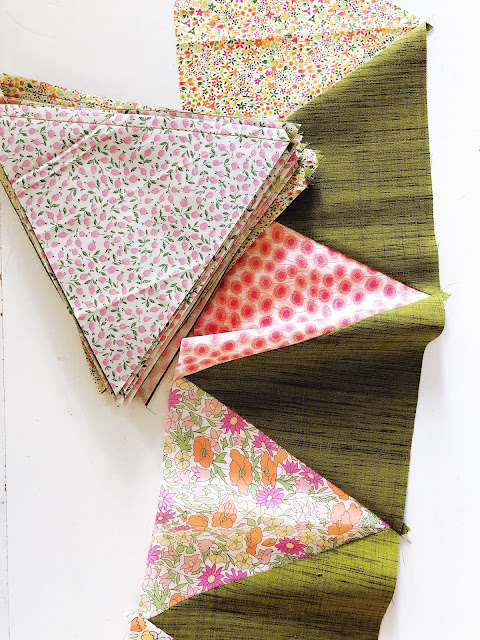 It's been a while since I sewed any triangles, so I looked up the method online, thinking there was some trick I was forgetting. Nope. Just line them up and fold them over to sew. They came together so fast! 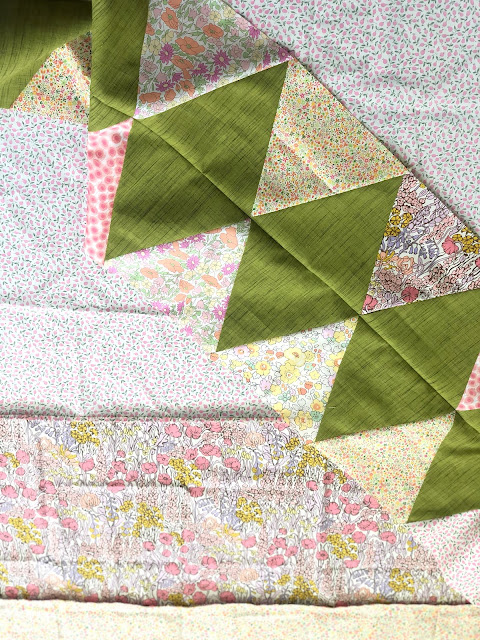 I'm making green diamonds and the Liberty prints make patched together diamonds of two prints.
I could hardly have picked two sillier fabrics to cut into triangles and sew on the bias cuts, but they behaved nicely enough. my points aren't all perfect or completely lined up, but with the amount of distortion and stretching I could have had compared to what I got, I'm not complaining. Triangles want to be triangles even when your tana lawns and crossweaves also want to stretch bit. 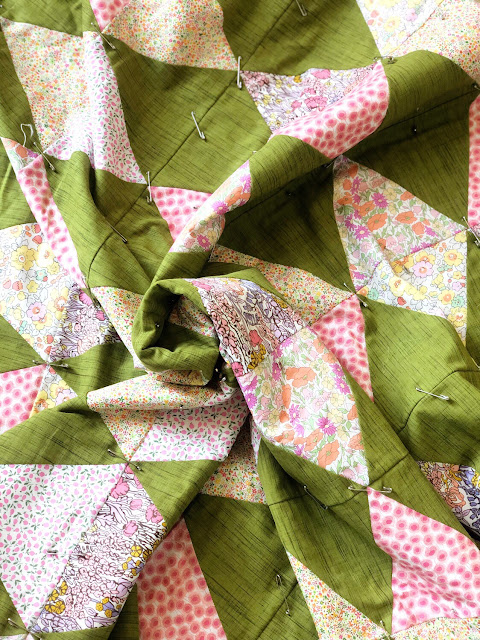 This weekend my husband was so sweet and gave me the gift of time to do as I liked as a Mother's Day gift. So in only 4 days I had the quilt fully pieced, a backing done, and everything pinbasted, ready for some delicious handquilting. This is an unprecedented record for me. Have I actually gotten a bit faster at quilting? That seems to be a theme this year, so maybe I have. And along the way I've actually pretty much fallen in love with this crazy, funky quilt.

It reminds me very much of something that would have been found in one of my great-grandmother's houses during my early childhood at the dawn of the 70's, perhaps something that had been there since before my birth. Maybe it was that combined with Mother's Day weekend that inspired me to name the quilt "Mildred and Ethel" after my two maternal great grans, both of whom I knew and visited a little in my toddler years.

Ethel, for certain I remember, and her lovely backyard garden in Logan, UT, with the Logan temple (where my parents were married) in the background. Her basement with the taxidermy always creeped me out, but I enjoyed the rest of the house. It's part of my earliest memories.

Mildred I remember less well, but I do have a few distinct memories of her home: the Christmas village with train under the tree in winter, a refrigerator on the back porch, and her cherry trees, which seemed a vast orchard to tiny me, but were apparently only a few in number. Apparently I don't have any photos of me with her, either. I'll have to go to my aunties and see what they have for me.

I'm not sure which lady is the green crossweave and which is the Liberty, but the two distinct fabrics make me think of there being two of them. I'm also going to handquilt this in two colors, white and olive green, one for each lady.

With summer coming on fast, I am trying to get as many projects as possible into handwork mode so i have something to take on our travels that doesn't require me to be a machine. I'm pretty chuffed to have this vintage-esque lady in the position to be handquilted to my heart's content.
Posted by hydeeannsews at 4:47 PM