gypsying along, learning as i go

i've been inspired to pull out the old gypsy wife lately. maybe it's because liz (mostly)finished her top (but decided to add a border to fit her bed), sarah's blocks are killing me on instagram (@sarahscraw), and megan is working on hers again. maybe it's because i really just like it and i'm mad at my other wips at the moment.

i've given up on the quilt along schedule. partly because it's over and partly because i like the idea of going at it section by section better. i was beginning to worry my colors wouldn't be spread out evenly enough over the quilt if i didn't see what went next to what. besides, getting one little section sewn would look like an actual quilt as opposed to the piles of blocks i've got.

however, although i completed all the blocks for section 1, i don't have all the strips ready for it! so i've hit another temporary snag and just kept making whatever blocks i liked for the next two sections. i do have lots of strips cut, but i've been cutting from the fabrics i'm using as i go. consequently, all the strips i have cut are the same fabrics in the blocks i was hoping to sew together. i need to cut other strips so i don't have identical fabrics in the blocks and strips for each section. 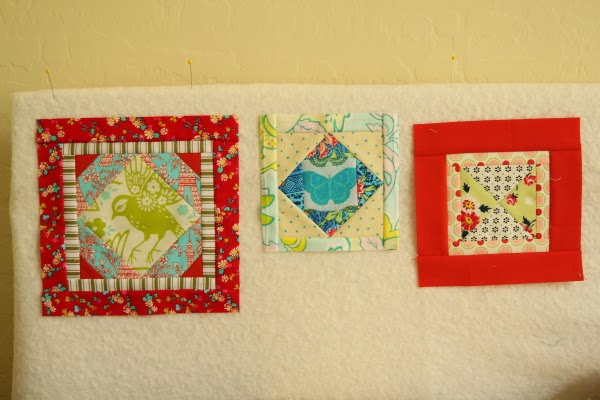 the bird block on the left is a bit of an improvisation on my part. first of all, i wanted to use that bird in a specific location in the quilt, so i had to switch two blocks around. i have two other animal blocks, the elephant and the goat. i wanted the animals spread out over the quilt but the bird was going to be next to the elephant, so i had to find a different block of a similar size so i could switch them. i found a bordered sq in a sq/econ block in a different section that i could trade, but the center was the wrong size for the bird so i just made up my own block altogether. maybe this block has been made before or maybe i invented a new one. i shall name it "bird in a cage" and leave future generations to guess at what it has to do with a bird like i wonder over "kitty in a corner", which doesn't even seem to have a corner for the kitty to be in.

so i made up my own block to feature the heather bailey bird from her up parasol collection. it was just going to be a multi bordered sq in a sq/econ block, but then, i used some scraps for the red-and-aqua eiffel tower second square border. i had just fussy cut an eiffel tower and had four hsts on hand, which i liked with the bird, so i used them. 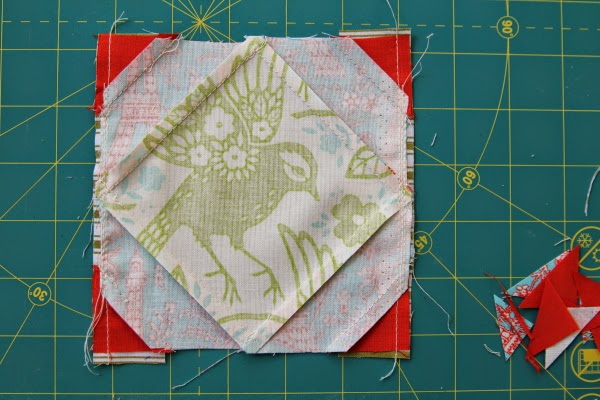 unfortunately, they weren't all quite big enough. i did a stitch-and-flip to add some red triangles to the tips to ensure at least the corners were right.  the sides i could make up for in the seam allowance. 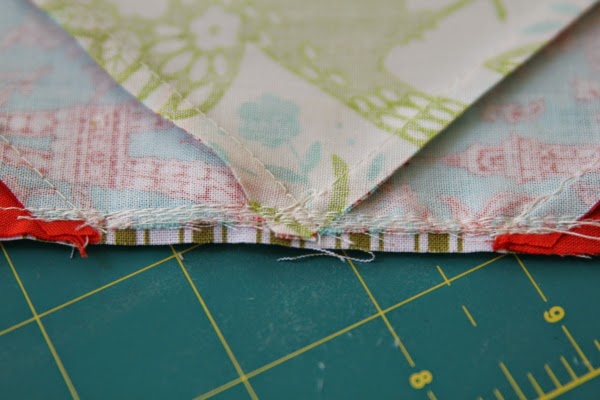 in the spots where the seam allowance was really lacking i simply sewed right next to the seam three or four times to strengthen the area. i'm fairly certain this will work. even though it's under 3/8" i don't see it unravelling with all that stitching over it.

then i had outer boarder troubles. originally, i used the icy blue boarder you see on the butterfly block (on instagram for anyone interested), but it seemed to make the block sort of fade out when i wanted it to have a really strong outer edge against the surrounding strips. also, the red corners looked weird and totally out of place. i took it off and put the red on instead. i like it much better now. my bird is well contained.

each of these blocks has a been a mini exercise in technique and fabric placement as i deal with bare-bones instructions in the pattern and think about each little piece and layer of the block, how it plays against or interacts with it's neighbors. it's like a lot of individual projects that will add up to one eventually.

i've been going a bit crazy with the lack of directions in the pattern but it's also forcing me to figure a lot of it out on my own, which makes for more memorable learning. thank goodness for rachel's angled class so i have some clues about triangles and how they interact! this was incredibly helpful when it came to the old maid's puzzle and the perishing block.

i'd been hung up by the perishing block for months. it was the next big block i was supposed to do for the quilt along (and maybe the reason i fell off the wagon) but i kept hearing how difficult it was. having done enough economy blocks now, i was ready to tackle it. (i was going to talk all about what i've learned about sq in sq/econ blocks, but i think i'll just make a separate post. that'll be easier. since i have many a sq in sq/econ block to go for this quilt, there will be lots of opportunities to talk about them coming up.) with the fabrics i selected,the perishing block is not my favorite but i like it well enough and am so glad to have it done! i didn't put a lot of thought into each fabric but i did pay attention to value when selecting them, which really helps the individual layers either blend or stand out. value-wise, i'm please with my results.

the old maid's puzzle i basically had to figure out all on my own with little help other than a diagram and inaccurate measurements in the pattern. i'll be writing a separate post on that process, too, in case anyone else needs some help. i really liked all the fabrics going into it but the results feel quite flat and dull to me. however, the quilt could use some quiet places so it will remain as is. there is another one of these blocks in the quilt so i have a second chance to jazz it up on round 2.

i knew this quilt would push my skills, and my oh my, has it ever. i now feel like i can take on anything with a straight line. (curves coming up soon!) i'm getting less upset when i make a mistake or something goes wrong because these just become opportunities to learn or to improve, to do something even better.

and when i have completed this lady, i will feel i can absolutely, with out a doubt, call myself a real quilter.

linking up with lee's wip wednesday at freshly pieced
Posted by hydeeannsews at 4:01 AM