plus a diamond polished off 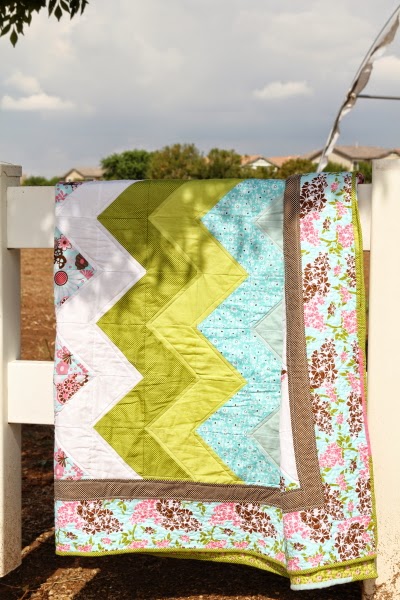 yet another one of those quilts i almost finished for last christmas has been completed. even though all this one needed was the handbinding, somehow it still took me 10 months to complete. it's been a slow quilting year for me. d1 and i went on an outing today to photograph her new mama-made quilt and spend some mother/daughter time. when i finished the quilt off on sunday, i sat down and wrote out some thoughts that go along with the finish. so this is a two-part post - the thoughts i had when i actually completed the quilt and the photos from today, accompanied by a few notes from our outing and photoshoot. as you'll see, despite the fact that she is now two inches taller than her mama, she had some issues getting the quilt held up for photos. it fell or her arms got tired more than once. we had lots of good laughs along the way. 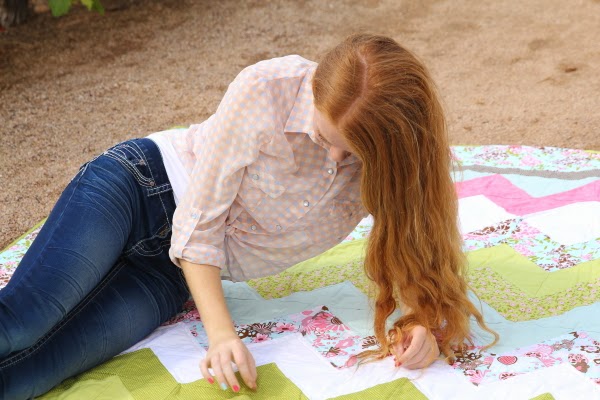 i put the finishing stitches into the binding of another last-christmas quilt today. d1 now has a mama-made all her own to snuggle, curl up in, read under, sleep with, dream on. and although i'm pretty ambivalent about the styling and process of this made-from-a-kit quilt, it does feel good to have it completed and ready to hand over. 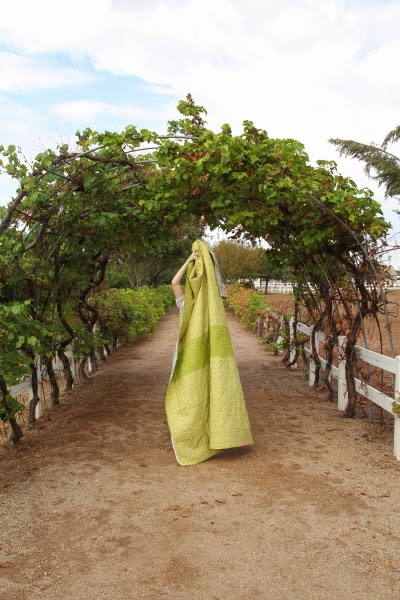 later in the day, the mr and i were discussing some long-needed overhaul to the way our home and life functions. there are so many places in my life where i've failed to live up to my own expectations and ideals, to what i intended to do. kind of like with my quilting, i had big ideas about what i was going to do and be in my life, and i bought all the trimmings to go along with all my grand schemes. and kind of like my quilting, life has worked out a lot differently than planned, and i've been left with a large amount of clutter and unfulfilled dreams. it's time to review priorities, let the excess go, and simplify so that i don't miss out on the essentials. 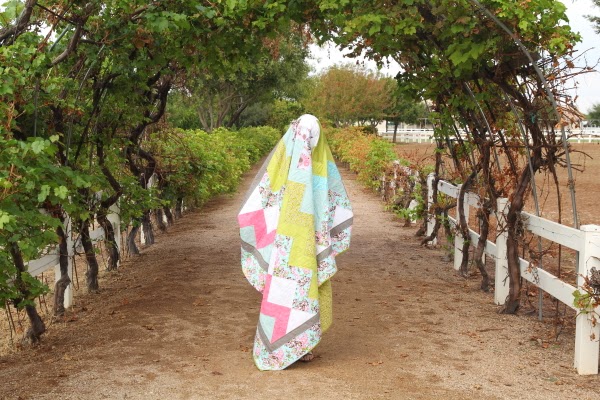 as i sat considering where i intended to go as opposed to where i've ended up, it occured to me how complicated even the simplest of tasks and relationships can be: so many options, so many choices to make, so many styles or modes to choose from. i was also thinking of the quilt i'd finally completed. "goodness!" i laughed out loud, "turns out quilting is the least complicated thing in my life!" imagine that. four years ago, as i sat in my first quilting class in front of my old high school singer machine, inwardly trembling in fear that i wouldn't be able to actually do this big thing i wanted so badly to do, i would never have guessed how relaxed i would one day feel making a quilt. 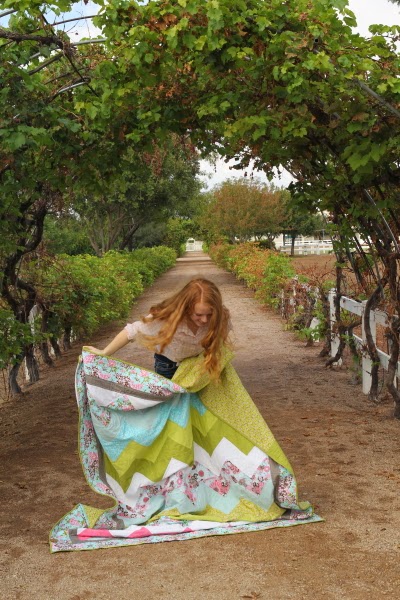 sure, i still mess up constantly. and sewing a straight line or accurate quilting stitch can allude me, but that mostly happens when i am quilting a sandwich as opposed to when i am piecing a top. the piecing part i've become comfortable with. i have to assume that because i've had a lot more practice piecing than with quilting, that in time that will come more naturally, too. the mistakes i make no longer throw me the way they used to. i expect them now and am usually able to take them as part of the process. but i've got over a dozen completed quilts to my name, actual evidence that i can do this difficult thing. so, really, quilting is not that complicated for me anymore. 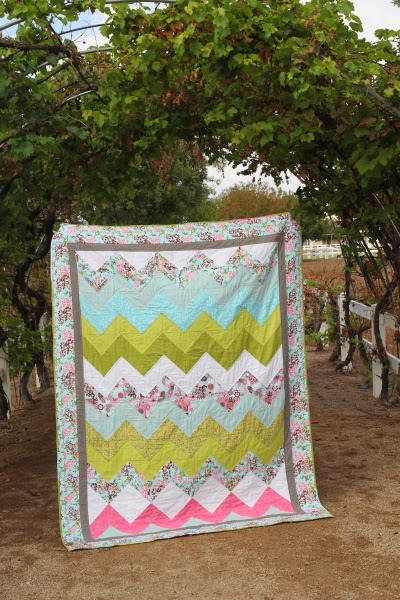 on reflection, i'm only about half way through my hands-on, in-home parenting life with one child nearly three years old and the oldest about three years away from leaving the nest. i had hoped to learn how to be a good mother before my children left home, but that's the thing about parenting (and quilting) - you learn as you go. there's no way to be an expert before you start your real training in the field. so admitting my mistakes and trying to correct them now rather than later is a good move. it's simply time to swallow my pride and seek to make things right like i've been able to do with my quilts. eventually i'll have 7 grown children that will hopefully be proof that i learned how to parent. 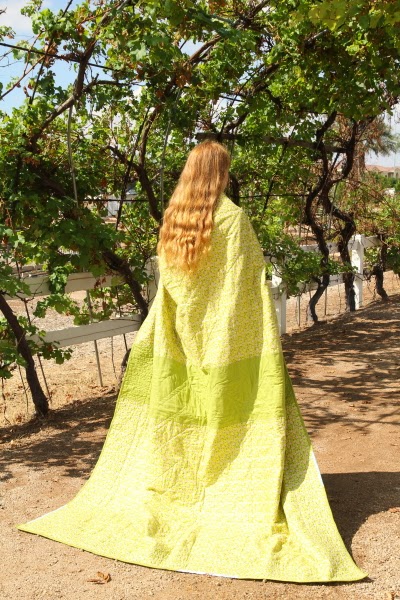 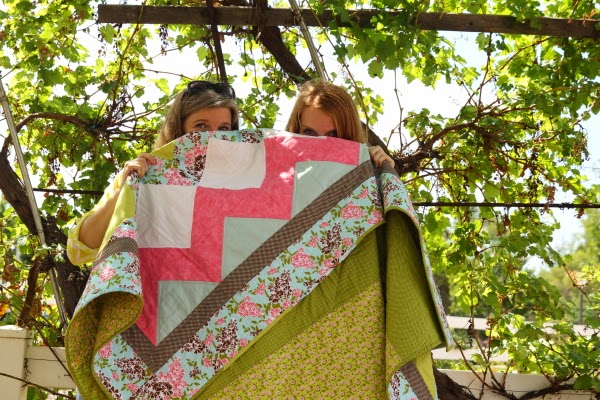 the quick facts on this quilt: it's made from a kit my local store put together of a pattern by carina garnder for her dainty blossoms line for riley blake fabrics. except that i decided to put it together during a quilting class, so i ended up using triangles-on-a-roll to make the chevrons rather than the pattern. whatever. it's a chevron quilt i did zero design work on and my daughter, d1, asked for the quilt when she saw the store sample. the only bit of original design that ended up in the quilt is the row of white diamonds i accidentally made when i sewed one row together incorrectly. hence the name, "plus a diamond." the back is pieced from one large bit of ditsy floral and a strip of the green dot i used for the binding, which then left me short on the binding, so i had to piece in bits of other scraps for my first scrappy binding. 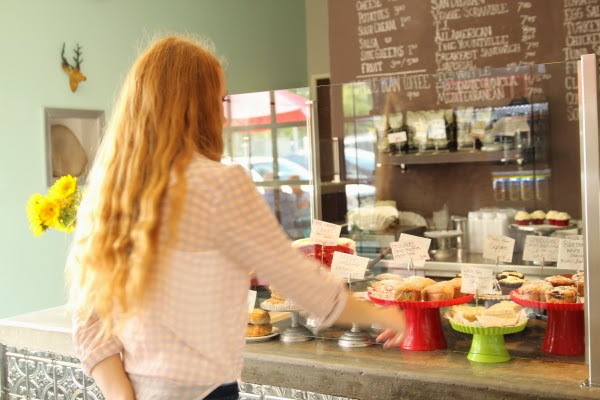 after taking our photos, we went into the coffee shop for lunch, but settled on a sweet instead because d1 decided she didn't want a sandwich but an actual burger from the grill also on site. 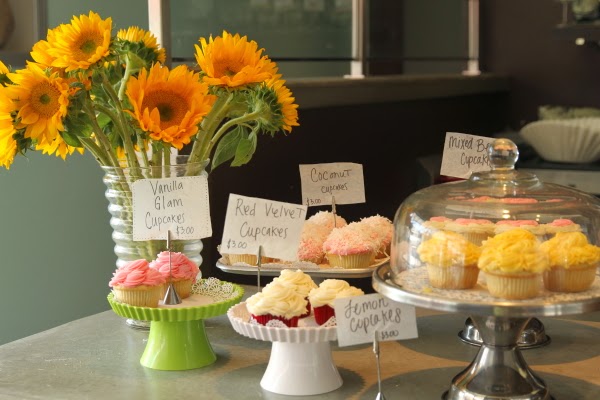 i die over their arrangements every time i come in here. just looking at it is delicious enough most days. 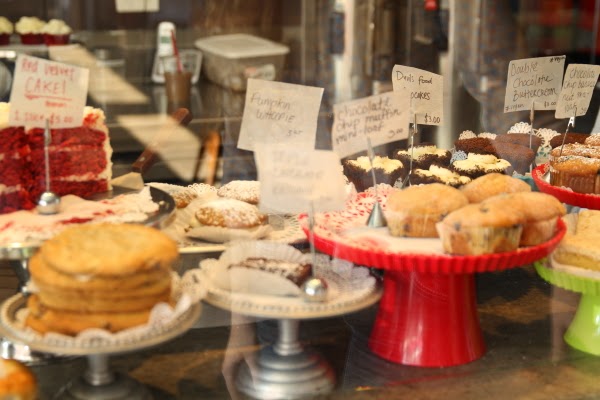 and that right there is what i would have chosen: devil's food cake. but d1 picked the double chocolate buttercream instead. i warned her it was vegan, but she wanted it anyway and it turned out to be scrumptious. we grabbed her treat and then our lunch at the grill, where we laughed a whole lot more. especially when a pea i was admiring before consumption suddenly jumped to the floor. 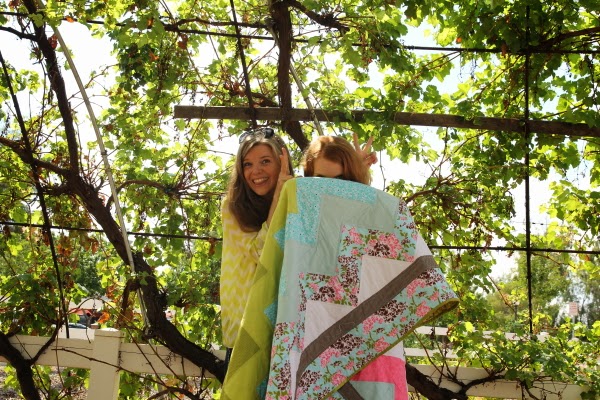 this particular daughter is quite happy-go-lucky and cheery. she laughs a lot, which is good for me. it helps me relax sometimes when i'm so unnecessarily uptight. she's made my entry into parenthood relatively easy, although i admit she was pretty high maintenance as a baby. still, she's a great kid and has helped me navigate the parenting waters with all her natural goodness. more than anything, she knows how to laugh at her crazy mama. i love her to the moon and back.

when we were leaving, d1 said, "so when i finish my quilt, can we do this again?"
absolutely, sweetheart.

linking up with finish it up friday at crazy mom quilts.
Posted by hydeeannsews at 8:23 PM