what i did on my summer vacation

you know that old school essay that was supposed to start the year off, "what i did on my summer vacation?" none of my teachers ever actually gave me that assignment, but i'm the homeschool teacher now so here's my answer: 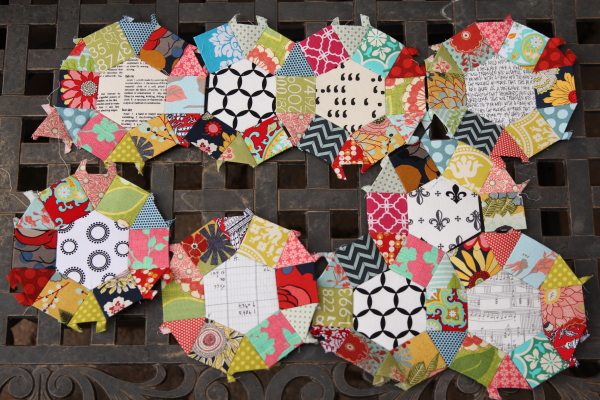 i did lots of epp basting and made 5 whole blocks (wheels), 1 half/middle block, and 1 set of 3 interconnected blocks. voila! i believe i have enough pieces basted to complete a good dozen or so more. with these blocks, that will give me about 2 rows of the quilt completed.

the reason my piecing is rather random is that after completing the first two blocks, i noticed that the pattern in the book was slightly different from the pattern Katy had used on her cushion. i had to make a choice between the two. the pattern in the book featured complete blocks, side-by-side with squares in the corners. Katy's cushion was interlocking blocks. i decided i liked the dizzy look of the interlocking wheels. so i made one half block to fit in between the first 2 blocks i made (top left) and eventually tried my hand at 3 interlocking blocks (bottom right) to see what they were going to look like stacked. eventually, they'll all get joined up and filled in. 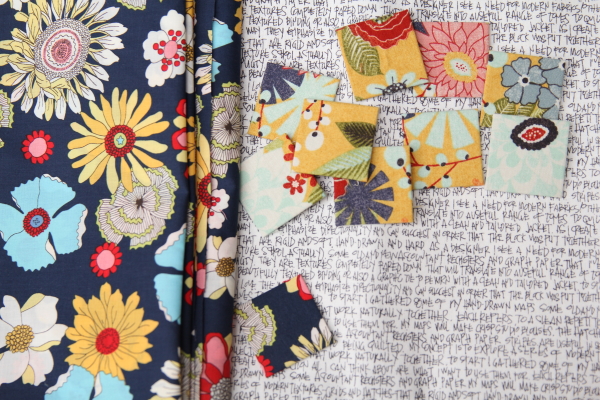 i made another design choice en route: to include my two favorite color prints in each block. i have enough prints that they each get used only every second or third block, but i like the idea of featuring the two florals i took my color scheme from more often. looks like i need to baste some more of the london calling squares before i can go much further.

and the 3rd adjustment i made along the way? after having a reality check with how long this is actually going to take, i think instead of doing a complete quilt top in just the wheels, i'm going to do 3 sections of wheels broken up by either a solid or maybe some of the black and white prints. it'll be sort of like a horizontal strip of rows of wheels, a horizontal strip of solid or print, wheels, print, etc., alternating in a stripe pattern down the quilt. no borders, just the strips. 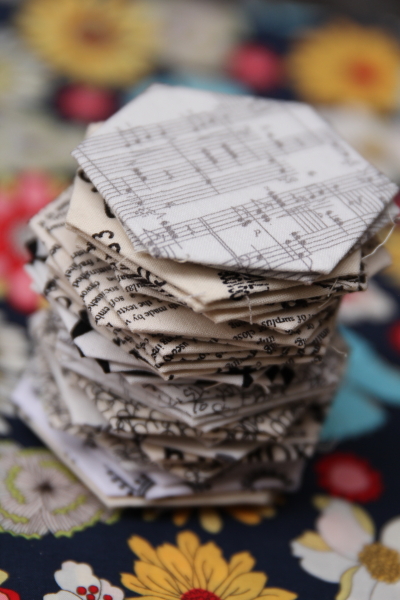 i originally estimated i'd need about 100 blocks. now that they're changed, i'm not sure how that's going to work. one of my little nieces asked what i was making as i stitched at the family reunion. i told her it was a quilt that would be made out of 100 of the wheels. the next morning she asked me, "did you make 100 of them yet?" oh, i wish!

now that i'm home, I've been running around like a crazy woman getting school started, the packing all put away, catching up on chores, and going to various appointments. i think i've been in the car more the last 4 days than i was on our road trip! i also think i need another staycation to recover from that trip. 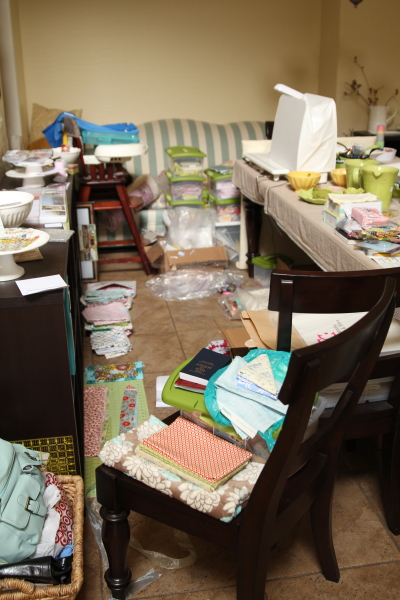 i keep dreaming about quilting, but that is so far down the list. i've managed to spend a little time cleaning in my sewing area, which was surprisingly messy even though i was gone. that's mainly because i was frantically preparing epp for the road up to the last minute, i had a few packages arrive just before i left, and i made some purchases along the way. i literally got home from san diego jluy 12th, ripped into my packages, spent 5 minutes looking at the contents, then finished packing for the road trip and got in the car with the kids. we basically came home for a few hours to load the car and collect the kids before we hit the road.

i'm married to a high-octane man, so it didn't slow down or change much for the whole 5 weeks.
that's why i'd really like a staycation now. besides, vacations with children aren't vacations, they're trips and a change of location. fun, but not relaxing. i'm not complaining. i'm just saying i'm exhausted. (so why am i blogging? i missed quilting and you people!)

therefore, my cheater finishes for the Friday Finishes link-up with crazy mom are that i finished my road trip and i've featured the blocks i finished along the way. it's all i've got folks!

i promise i'll share something new or different soon.
Posted by hydeeannsews at 7:00 AM