there and back again 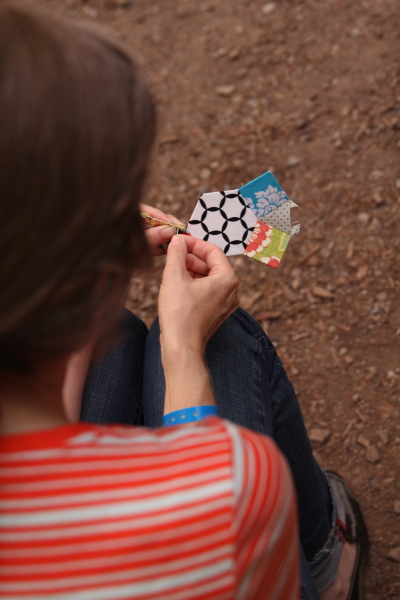 where in the world have i been for the last month or so? where haven't i been is more like it! all over the western united states: arizona, nevada, utah, idaho, oregon, washington, montana, wyoming. the crew and i just completed a nearly 5 week road trip in our monster 12 passenger nissan nv van. whew! it was marvelous and chaotic, with plenty of highs and lows en route. but it's nice to be home once more, even with the extreme heat here. i tried to keep up a bit with the quilty blogging world on my phone as i went, but really, i spent time with my family. and worked on my epp along the way. a little.

the first week gone, we were at aspen grove family camp, all squished together in one of their tiny rustic cabins. despite close quarters, I made room for my epp project on a chair in a corner of the room next to my side of the bed. 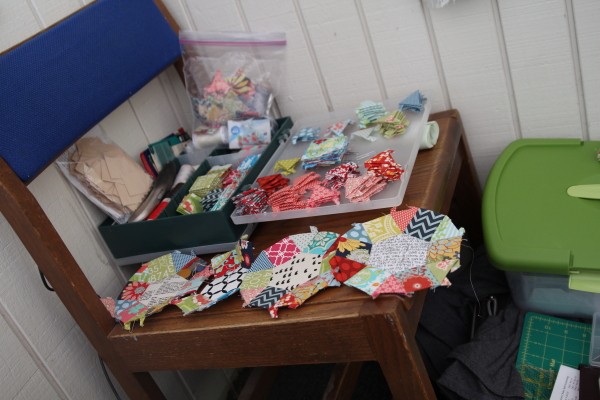 I used the big travel kit to house most of the bits and pieces and took my little ziplock baggie around camp with me. I got lots of basting done over the week and pieced together an additional 2 1/2 blocks. 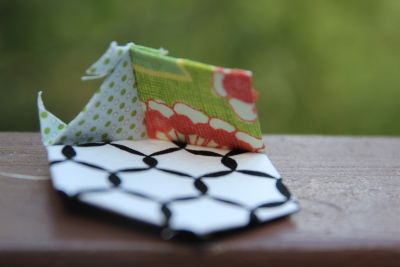 mostly, it was smooth sailing, but occasionally I made mistakes along the way. like when I sewed the side of a triangle down to the hexagon center instead of to the next square, creating the 3d piece above. silly me. unpicking handsewing is much more painful than undoing machine sewing because of the time involved in getting those hand stitches in there. however, it must be done when mistakes are made. 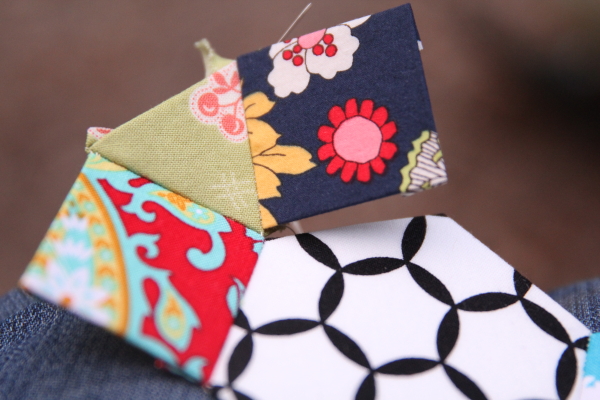 another problem I ran into at times was my shapes not seeming to match up. sometimes there would be a gap between pieces that were supposed to be matching up. i'm not sure what causes this, whether it's my basting isn't tight enough or i'm not matching pieces as well in the beginning. at first it upset me because I thought I was going to have to unpick the whole thing and start over. but I forged ahead and just sewed the next seam down. somehow it worked out. maybe this will cause more inconsistencies later, but that's what I did. 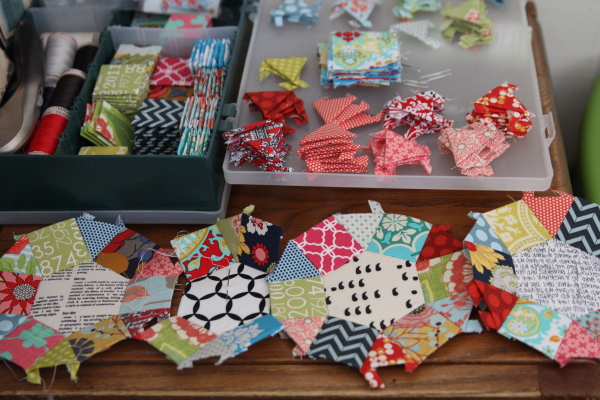 by the end of the week, this was the pile of work i'd completed. I refrained from sewing all the blocks together because I didn't have storage capacity for lengths of blocks. i'll work on that at home once I get more blocks completed.

I had this absolutely crazy idea that because I was going to be on the road for 5 weeks that maybe I could get the entire quilt top done. completely bonkers, I know. that would have been 100 blocks in the original plan I had for the quilt. (more on changes later.)

i'm sure I could have completed more than I did since there were several times I could have been sewing and didn't, for various reasons. but it looks like this will truly be a longterm project for me. oh, well. it'll help me get through many a soccer practice, art class, or various other kid events I have to sit around for.

and now liz can stop being bored of me being gone, because i'm back! she did continue to nicely inquire about my travel, but I think she was about to drop our friendship altogether since she got so famous while I was gone. just kidding, you know I love you liz! ours is a relationship built around teasing and stash padding.

homeschool has to start up and there seems to be endless house management issues to deal with after being gone. like the leaky kitchen sink we came home to and had to replace immediately. it's taken me 3 whole days to get around to blogging.

I managed to produce 1,990 photos of the trip, so there is still lots of trip-related quilting to share. and maybe some day soon i'll do some other sewing now that i'm home again.

ps - any of you literary fiends out there know where my title came from? I selected it because we listend to J.R.R. in the car on the road.
Posted by hydeeannsews at 1:54 PM