girls out and about

i took daughters #4 and #5 to the scrapbook/fabric store on friday evening before daughter #1's last soccer game of the season (yay!) to have a look at some fabrics i was eyeing online. #4 was not too awfully well behaved. even with the promise/threat of one of the store's suckers if she was good, she barely held it together. no tantrums, just all over the place, grabbing fat quarters left and right, running around, squealing with delight, etc. i was also there to select fabric for an edith twirl skirt for her because a friend told me they were super simple to make. but my little monkey made that nigh on impossible to do. so i went back the next morning with #3 and #4 was not invited. we had some quality mommy/daughter time at a much better pace. 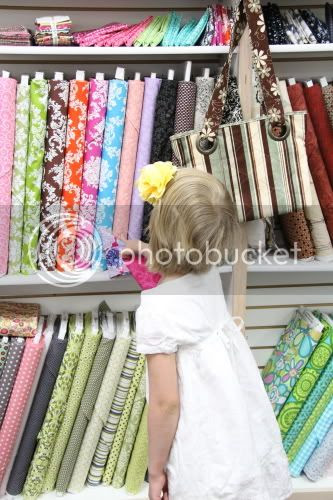 this little lady stayed close by me, didn't grab like crazy, and even brought her own money to buy fabric with. two of her selections weren't available as fat quarters on the shelf so i made her carry the bolt to the counter and ask for a cut herself. at first she didn't want to do it, but i made it clear that was the only way she would get what she wanted and she did it. the second time around, she carried the bolt with a smile on her face and belted out "fat quarter, please!" nice and loud. i had a pleasant trip with her and was even able to get some fabrics for those twirl skirts.

while at a different store, mulqueen's sew and vac shop, i saw the craziest quilt i think i've ever laid eyes on: 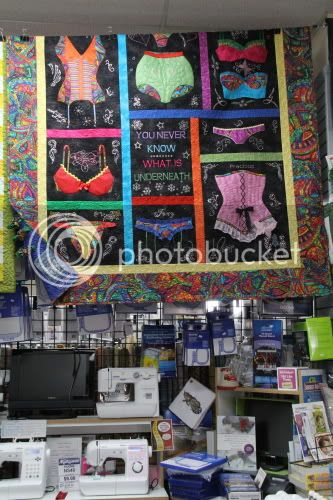 who knew lingerie and quilting went together? not me! and i'm still not convinced. where would one put such a quilt? the guest bedroom?

the sales lady assisting me in finding parts for my machine told me the quilt was created as part of a challenge: that bright paisley fabric was given to participants, who were told to "make something wild" with it. i think the quilter most definitely succeeded in the wild department. wowsers. obviously this quilt involved a lot of time, attention to detail, and skill. beyond that i'm baffled by what to say about it.

however, undie quilts aside, i finally got the walking foot made for my machine! (that's her, actually, under the quilt - the pink-panelled project runway {innovis 40} by brother.) and while i was there, i sprung for a quilting table attachment, too. these purchases mean i'm ready to get to work on machine quilting limb and taite. if i'd had the walking foot before instead of trying to use my old singer foot i probably wouldn't be picking out all that stitching on limb still. those two projects are right around the corner.
Posted by hydeeannsews at 11:28 PM