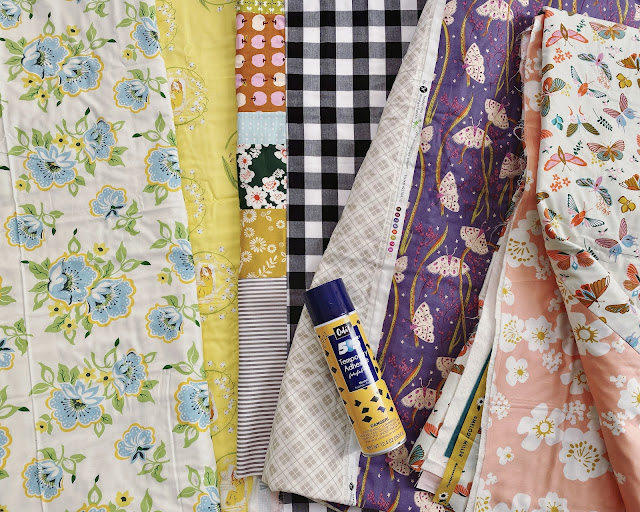 this weekend i unexpectedly got some freetime and i decided to get some quilt tops out of the "needs a backing" queue and have a back-making & basting party. once i have quilt tops pieced, i enjoy moving several of them through the next phases to finishing in batches.
i had 5 completed tops that needed backings: "frosted forest star", "fall paint lake", "aunt bets mother's day", "melonaide brightside", and my crossroads quilt. 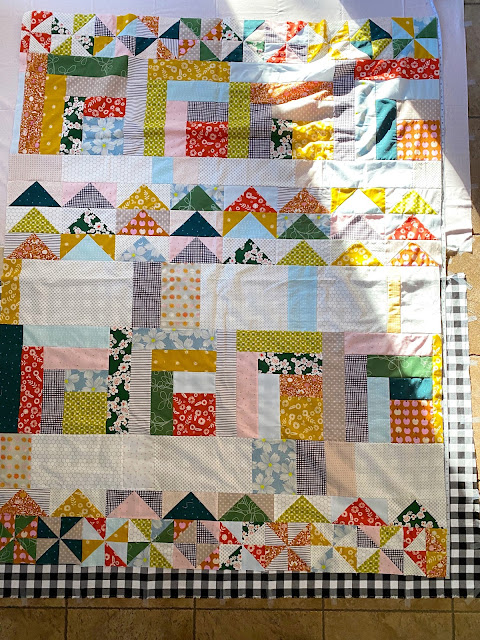 i had already ordered backings for "fall paint lake" and "aunt bets mother's day", so i started with making those two backings. the first was just two large prints sewn together - easy and done quickly. for "aunt bets" i wanted to add a strip of scraps from the top between the two large pieces i had selected for the back. that took a bit more time, but not much. 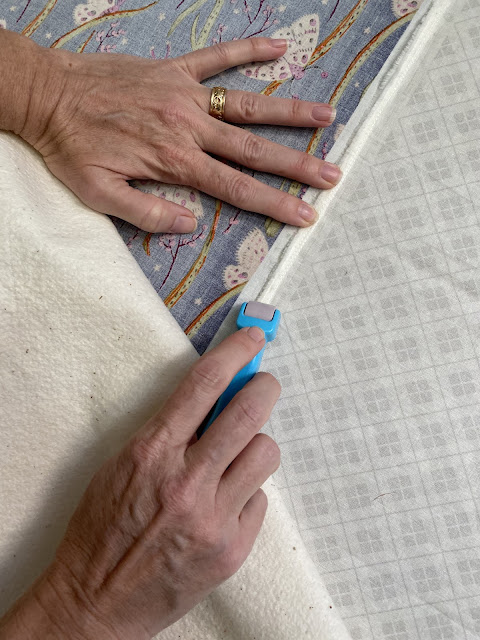 a little tip from when i was basting "fall paint lake" - the seam wasn't laying down well (i may have actually neglected to press it when i finished the back a few days ago), so i grabbed my little manual seam roller i keep at my sewing machine for pressing open small seams i don't want to do at the pressing table. i baste on my tile floor, which made a great place to press with the roller. it worked like a charm! i didn't have to untape the whole thing from the floor and wrestle it across the pressing table, which would have been so much more work.
friday night, when i got the two decided backings done, i took a break from backings and pieced a bunch of strips together for a fall scrap quilt i'm working on. then i started looking for a back for the "frosted forest star" and got stumped. it has very specific colors on the front, and not many at that. plus, it's supposed to feel like a winter forest, so i wanted any print i might use to fit that theme somehow. finding that combination proved impossible in my sewing room and online (where colors are especially hard to discern). i'm just going to keep my eyes open and wait that one out. or maybe eventually decide on a solid  backing in colors from the top.
that was basically the end of my productivity until this morning, when i knew i needed to either get those babies basted before anyone woke up or it wouldn't happen. it was finish up or clean up because there was an explosion of fabric all over the front part of the house and that needed to end. three days was enough. 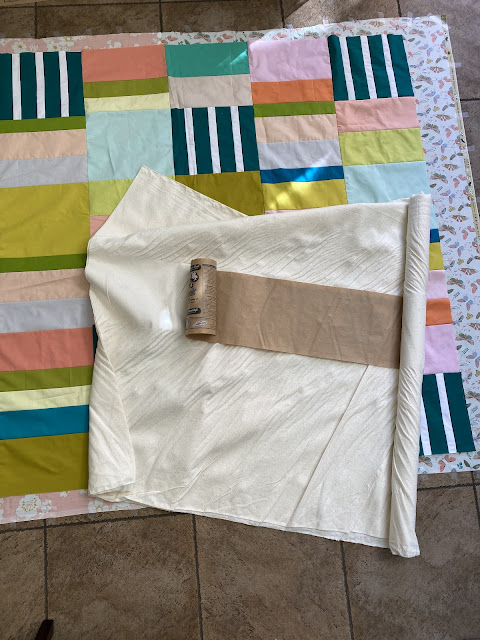 i got up early and basted the first two quilts as soon as i rolled out of bed. that was going to be it, but i thought i should go ahead and see if i could quickly knock out "brightside", too. over the weekend i had begun to consider a butterfly print from the "stay gold" collection by kimberly kight for ruby star society. after i decided on it, i began to have a vague memory of maybe actually purchasing it for that purpose. remembering that would have saved me some time, for sure!
i had quite enough to make a full backing from just this one fabric, and i was tempted to do so, but i didn't feel like piecing it together because i didn't think i could do it in a way that would make me happy with the results.
i remembered there were leftovers of a coordinating melon-colored sateen that we used as the backing for d5's "the pleasantest thing", and i decided to use that as another piece for this backing. they coordinated perfectly and i zipped that up quickly, too. the spray basting part takes maybe 25 minutes, start to finish, so i managed to get that done also.
this quilt happened to get the very last piece from my 2nd giant batting roll of "warm and natural" quilt batting. when i saw the roll was getting low last year, i tried to replace it with a new one from joann crafts, where i had purchased the 1st two, and discovered they no longer sold that brand. i couldn't locate it online, either. i don't know if the company folded or if joann crafts just switched brands. i've been satisfied with this brand and really liked having it on a roll at my disposal in my sewing room. i bought the new brand joann craft now carries, but it doesn't seem the same at all. i guess we'll see soon what it's like. it's the end of an era in my quilt making journey. 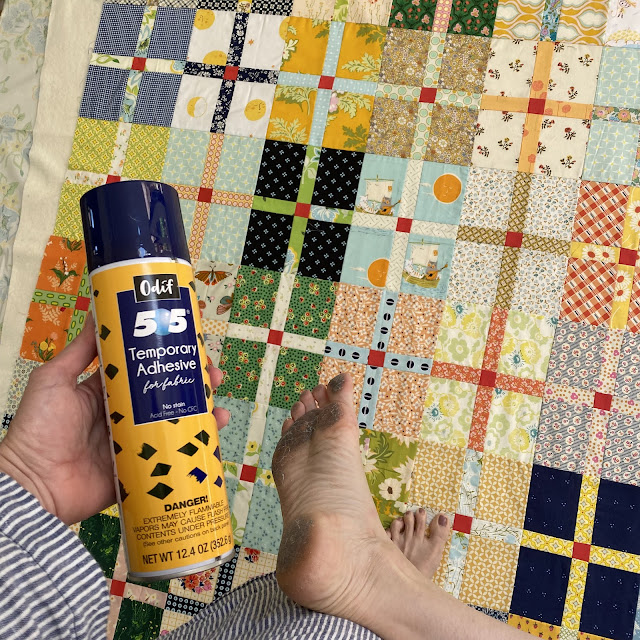 once i had "brightside" basted, i began putting away all the things i had pulled out of my sewing room and spread around the adjacent piano room floor over the weekend. there were also a few already basted projects i was taking stock of which i had laid out on the floor. when i pulled them up to put away, i found "crossroads" top laying there under them! i hade completely forgotten this was another top i wanted to get backed and basted.
i was supposed to be going to the pilates gym in less than an hour, but i was itching to see if i could get just one more basting job done, so i began rummaging through my stash to come up with a backing. i found enough yardage of a lovely heather bailey print to make up one side of a backing. if i was going to piece the rest from smaller fabric cuts, i wasn't going to be able to do it before going to the gym class, so i was looking for another large cut. there is lots of heather ross also in the "crossroads" top, but i couldn't seem to find a large piece.
then i spied the beautiful yellow sleeping beauty print and there was enough of it! most of the yellows in the top are more gold in color, so i was wavering a bit. i looked at the light blue owl and pussy cat print and rapunzel prints. they would have also coordinated well and been lovely backing picks, but i would have to order yardage of them, which would mean waiting to back and baste this quilt another day. so i decided to go the easier, more cost-effective route and used the sleeping beauty print. i'm happy with it, no regrets.
i hustled and got the two pieces sewn together, then basted as quickly as i could. i went 5 minutes over time, which would mean being a tiny bit late to class, but i was so happy i'd managed to get everything done.
then i tried to quickly rinse my feet off to remove the spray basting they had picked up, as well as the bits of thread and fuzz stuck to it. my girls had been saying all morning, "mom, your feet are so dirty!," and i knew they were right but i hadn't realized just how dirty they were. four spray bastings had taken it's toll.
after a full minute i did not have trying to get everything off, i knew i was beat.
pilates is a barefoot practice at my studio and there was no way i was going in there with grimy, grey, sticky, thread-covered feet. so i missed my workout for the day.
but hey, i now have FOUR quilts backed and basted!
Posted by hydeeannsews at 8:33 PM