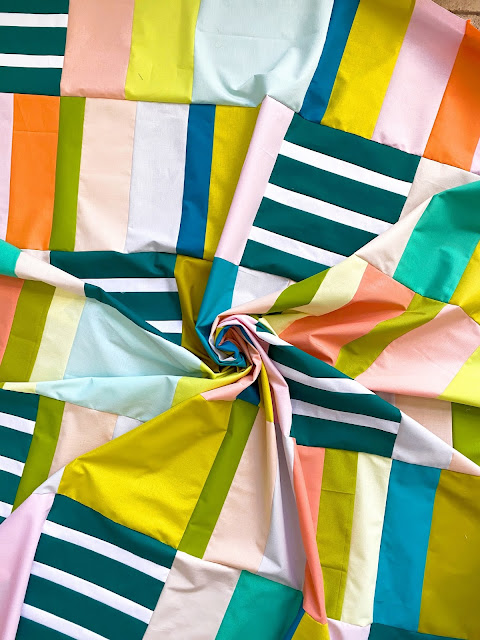 thinking i could complete a quilt top in less than 24 hours is definitely looking on the bright side of things.

in reality, i didn't start out thinking i was going to complete this in under 24 hours. i thought it would be fast, but didn't count on it being this fast or me having the time even if it was fast.

i'm happy to say i was very pleasantly surprised! 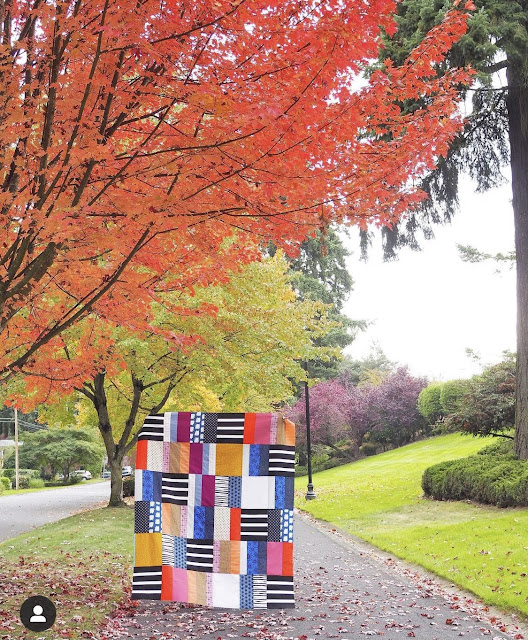 when i saw this photo in october 2019 posted by meghan @thencamejune, my jaw dropped. i was totally in love. those bold horizontal stripe sections and all the vertical stripes were just so fun. admittedly, the setting takes the quilt up a few notches, too. the way the reds in the leaves bring out the reds in the quilt is perfection.
this #brightsidequilt went on my "to make" list immediately. 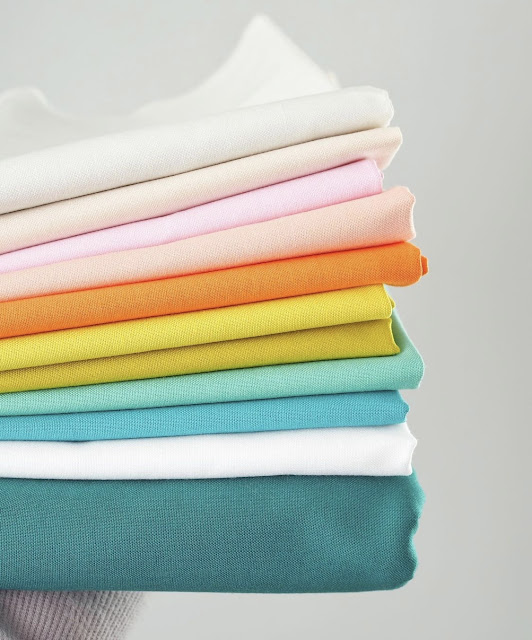 a little while later meghan posted this beautiful stack of kona cotton solids for a different project and i thought it would be the perfect palette for my brightside quilt. i could just see the deep teal green on the bottom and the white as the horizontal stripe blocks.
meghan kindly shared the colors for this stack: haze, lingerie, petal, peach, orangeade, wasabi, pickle, jade green, cypress, white, and enchanted (color of the year 2020). 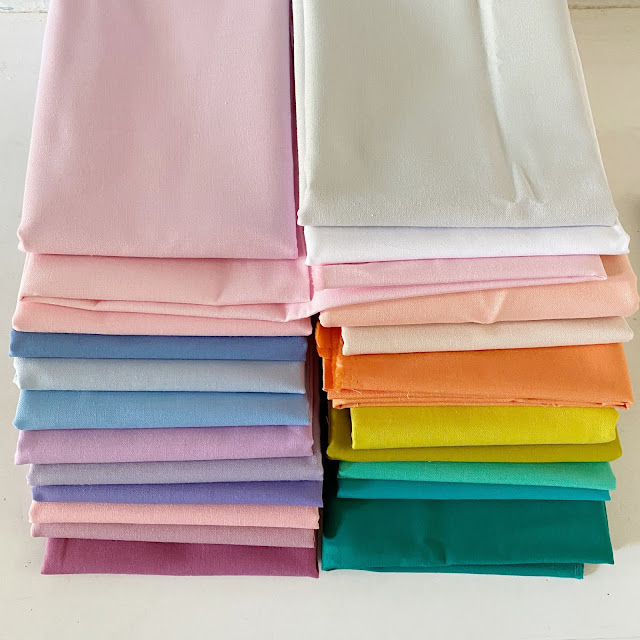 i quickly made an order for the colors, as well as a pile of blues and berries for another boxy quilt like my cheery easter quilt. when my fabrics came, the orangeade was a tad too bright for me, so i traded it for one close but not so bright in my stash (i think melon?). otherwise, i loved everything as it came.
these two pretty piles have been sitting side by side in my sewing room for ages, always making me smile and tempting me to start them. but i've been awful busy elsewhere whenever i'm sewing. i've started at least 4 new quilts in the last month, but it was never one of these two. 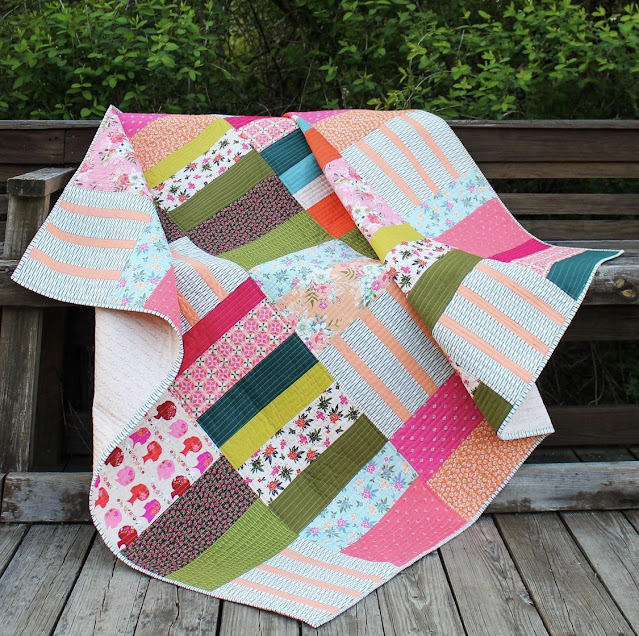 then designer maureen cracknal posted this very pretty version of the brightside quilt made from her new (very pretty) "open heart" fabric line for art gallery fabrics. i was smitten and reminded how much i have wanted to make this pattern. which i already have the fabrics for. i got pulled into scrolling the brightside hashtag and my itch to make it was renewed.
i had aunt bet's laid out on the floor outside my sewing room doors, with the top half fully attached and the bottom in it's rows but not complete. i so did not want to tackle it. there had been issues with my rows coming out even and i was just plain tired of aunt bet's. but i made myself put it together and then i put her away in the naughty corner. 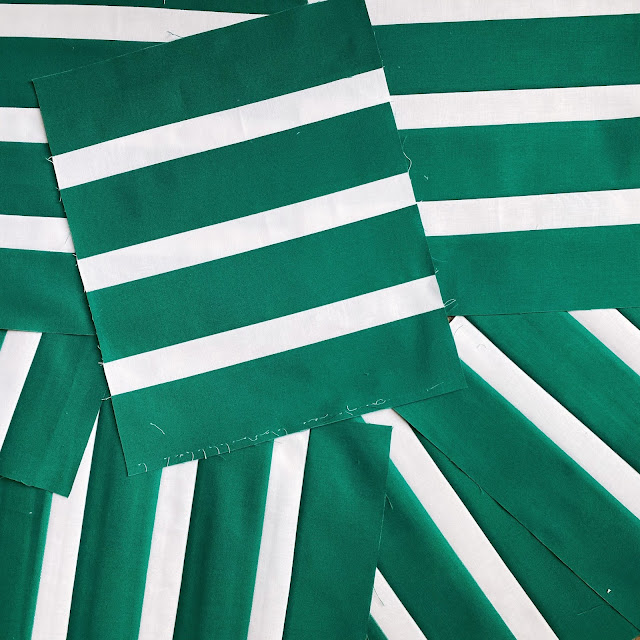 then i pulled out the piece of enchanted and cut away.
after cutting all the green and white strips, i pieced the first block and pressed it open to test it before i did all of them.
it came out a full 1/4" short on the height!
no bueno.
i made another block, this time with a scant 1/4" seam and being more careful with my pressing of the seams.
block number two was just right.
i went back and ironed the heck out of the first block's seams to open them up more and gain a bit more length in my block. of course it was a bit distorted after the aggressive ironing, but i did manage to get it closer to the needed size.
then i chain pieced like crazy, doing pairs of colors first and then pairing pairs until i had none left.
that was a logistical oversite on my part. there an odd number of strips in each block, so i had to unpick some of my pairs to get the blocks made correctly. 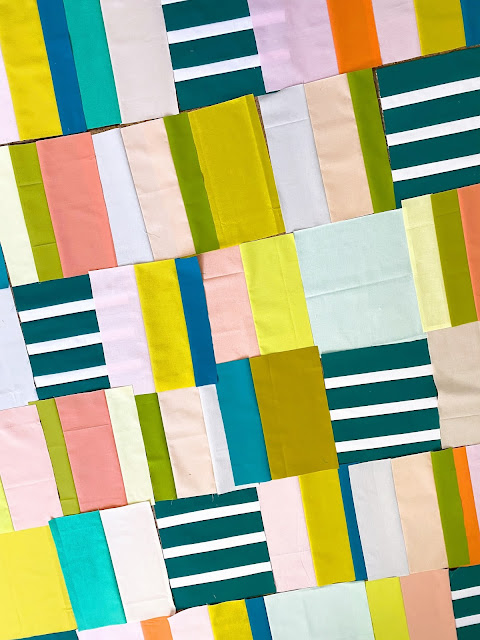 starting out with shortages and unpicking seemed an ill omen.
fortunately, it was smooth sailing from there. i never had another size issue or unpicking required.
the quilt is composed of 5 more block styles in addition to the stripe blocks. it really is quite brilliant. i began making the blocks in sets, doing as many as were needed of each block one at a time.
the pattern called for 18 fat quarters but my fabric pull inspired by meghan only had 9 fabrics in it. originally i intended to just use each color twice. once i got started, i thought that might not give me the same depth of color play as the pattern called for, so i started pulling coordinates from my stash. i was doing this at night, with only my electric lights to select fabric colors by, and was concerned how they would look in daylight. but when i looked at everything in the morning, i was quite pleased.
i've noticed as i work with solids that having two different but similar tones of the same hue really adds depth to the quilt, so i chose one or two more of each color, trying to get close but not too close to each. i didn't add any more neutrals. 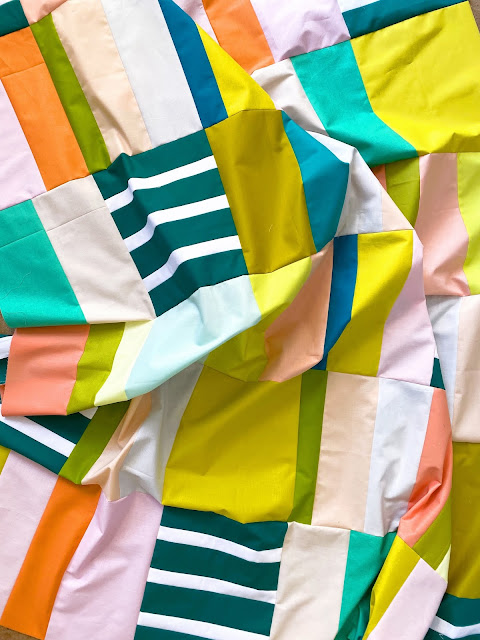 i was a little concerned about getting the colors evenly or pleasingly spread around the quilt. i could have studied everything more closely in the pattern to make sure i got the colors spread out, but i didn't want to spend that much time when everything was moving so fast. in order to keep really similar hues from being next to each other, i made sure that the pairs for each block were contrasting and put colors that i had a lot of (grellows) in blocks that called for 3 colors. then i put the grellows in the middle of those blocks. that was my best attempt at spreading around my colors. i also switched 2 or 3 of the blocks before assembly, but that's all.
i stayed up later than usual to sew that night, but by the time i went to bed, i had all the blocks put together and laid out in order. amazing.
in the morning, i got back to work and assembled the full top in an hour and a half with no mistakes.
i could not believe it!
after all the wait to get it started, i finally made this quilt top and completed it in less than 24 hours.
so awesome.
i need to decide on the backing and then i'll be able to finish this one off.
i'm leaning toward an all-solids back, probably like the one i have on "cheery easter" quilt. i just need to pick which color to use as the main one and then get the yardage.

then maybe i can make that berry blues boxy quilt?

Posted by hydeeannsews at 4:45 PM